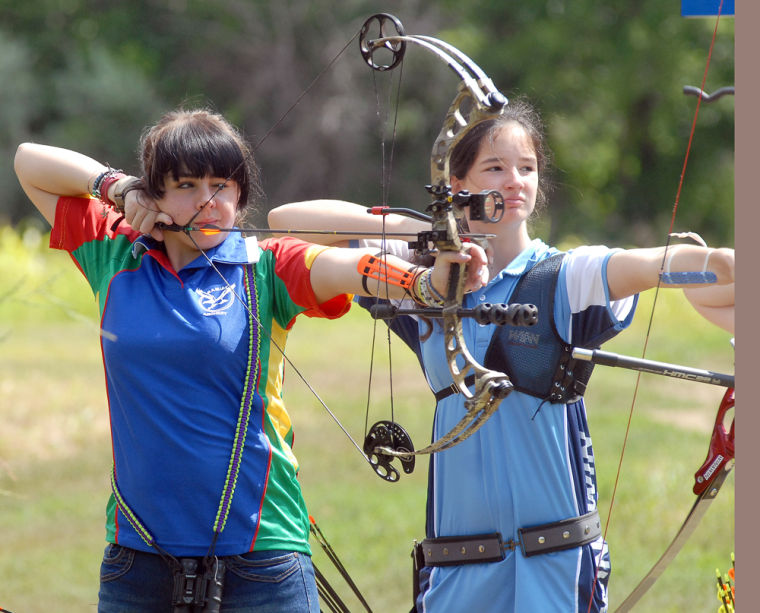 Jolien Els, left, of Namibia (Africa), and Dana Baird pull back their bows Thursday at the NFAA Outdoor National Championships in Yankton. 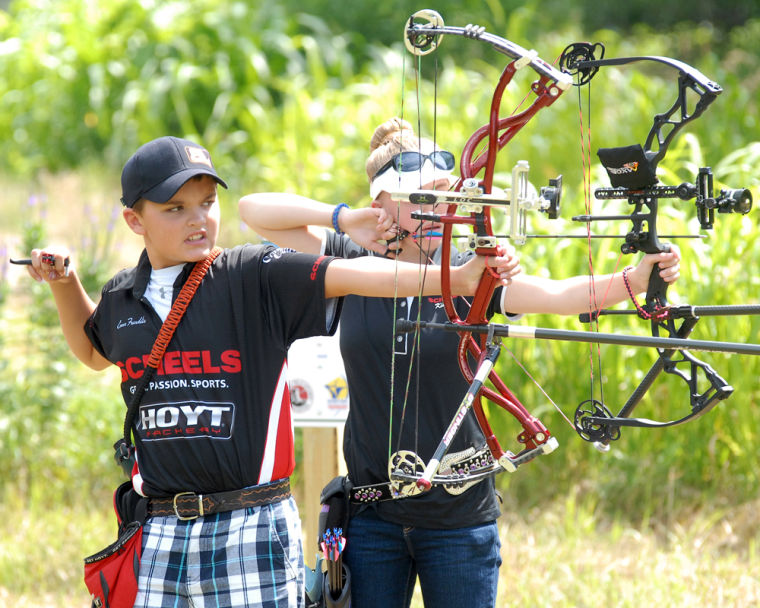 Conor Franklin, left, reacts to his shot Thursday at the NFAA Outdoor National Championships in Yankton. Behind him is Kenzie Thomas. 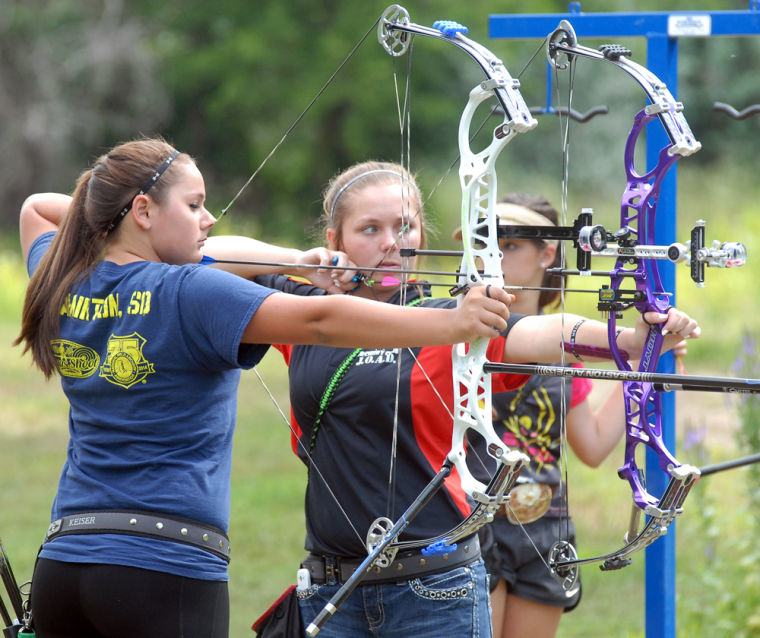 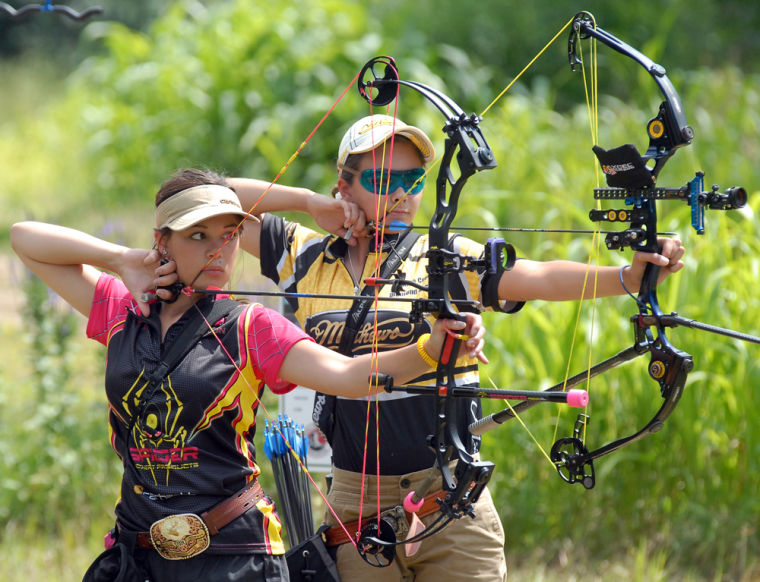 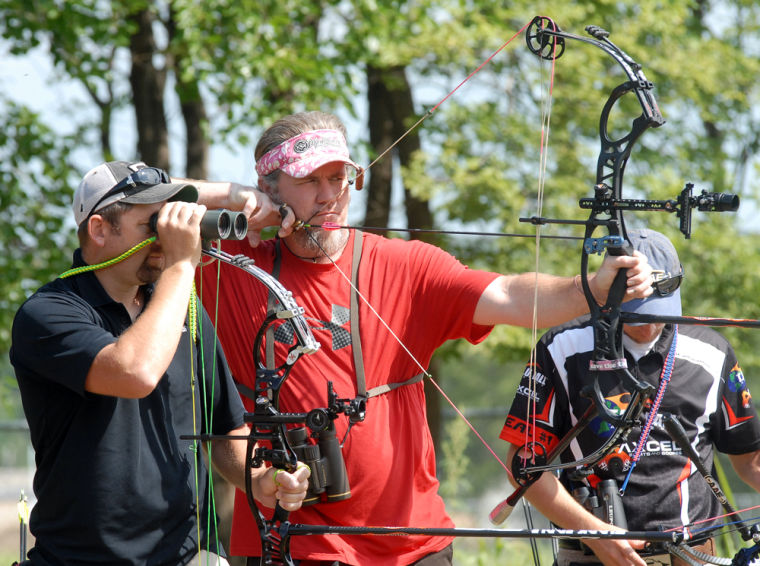 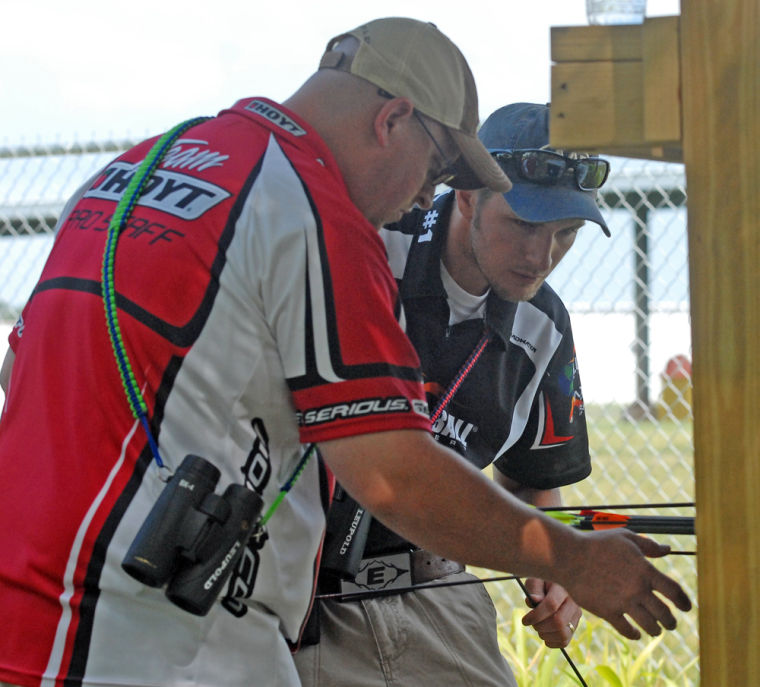 Professional archers Shane Wills, left, and Jesse Broadwater score their arrows at this target Thursday at the NFAA Outdoor National Championships in Yankton.

Jolien Els, left, of Namibia (Africa), and Dana Baird pull back their bows Thursday at the NFAA Outdoor National Championships in Yankton.

Conor Franklin, left, reacts to his shot Thursday at the NFAA Outdoor National Championships in Yankton. Behind him is Kenzie Thomas.

Professional archers Shane Wills, left, and Jesse Broadwater score their arrows at this target Thursday at the NFAA Outdoor National Championships in Yankton.

Eddie Whobrey admits to being fortunate to be alive, let alone to continue enjoying the sport he’s loved for many years.

A senior archer from Kentucky, Whobrey suffered a stroke in April and spent three days in a local hospital. Three months later, he is back shooting.

“It’s amazing to be able to continue shooting,” Whobrey said Thursday, midway through his round at the National Field Archery Association (NFAA) Outdoor National Championships in Yankton.

Whobrey, a former national champion, recovered 100 percent from the stroke with no lasting physical damage, because, as he said, “I have the good Lord to thank for that.”

A retired meter reader for an electric company, Whobrey traveled 12 and a half hours to Yankton from his home in Bee Spring, Kentucky (population 1,300).

Whobrey won a national freestyle championship back in 2009, setting a record for the highest score (553) in his division

Since then, he has transitioned back to bowhunter freestyle, because as he says, “I started shooting that way.”

The change has also resulted in higher scores, Whobrey said, although his performance Thursday wasn’t exactly what he expected, he joked.

Archers in the Outdoor Nationals will shoot for five days, but only three days of scores will count — meaning an archer like Whobrey, who wasn’t entirely happy with his score, can rebound the next day to compensate.

At least, as he pointed out, he’ll enjoy his stay in Yankton either way.

The International Field Archery Association (IFAA) World Field Championships doesn’t start until next Monday, but a number of foreign archers are already in Yankton.

One is Mathew Symmonds from Wales.

Symmonds, who works for a defense company, said Thursday he wanted to arrive in Yankton early enough to prepare himself and his equipment for next week’s 5-day tournament.

“It’s great to be able to practice here before everything starts,” Symmonds said.

The weather can be a rather big factor, he added — pointing out later that Yankton is significantly warmer and more humid than Wales.

“Bows can perform differently at different places,” Symmonds said. “It can depend on the weather.”

Getting to Yankton was an adjustment in itself, he added.

Symmonds’ travel took 20 hours, flying from London to Minneapolis to Sioux Falls, then an hour and a half drive down to Yankton.

He said the last time he shot in the United States was 2004, when he competed in an international event in New York.

Still early in his stay in Yankton, Symmonds complimented the new NFAA ranges.

“It’s very civilized and organized from what I’m used to,” he said, with a smile.

He has, in fact, been to every event over the past 36 years.

West, the former NFAA state director in Maryland for 12 years, recalled Thursday a time when similar outdoor target or field events were held in other locations across Yankton — including the trails at the Gavins Point Recreation Area.

“When the NFAA got this land, that changed everything,” West said, pointing to the Easton Yankton Archery Complex.

West said he was one of the state officers who helped the NFAA secure the move of its national headquarters to Yankton in 2008.

“For (president) Bruce (Cull) to secure this area, and for the city to invest what they have, this is simply outstanding,” West said.

His impression of the new field ranges?

“They are absolutely fantastic,” West said.