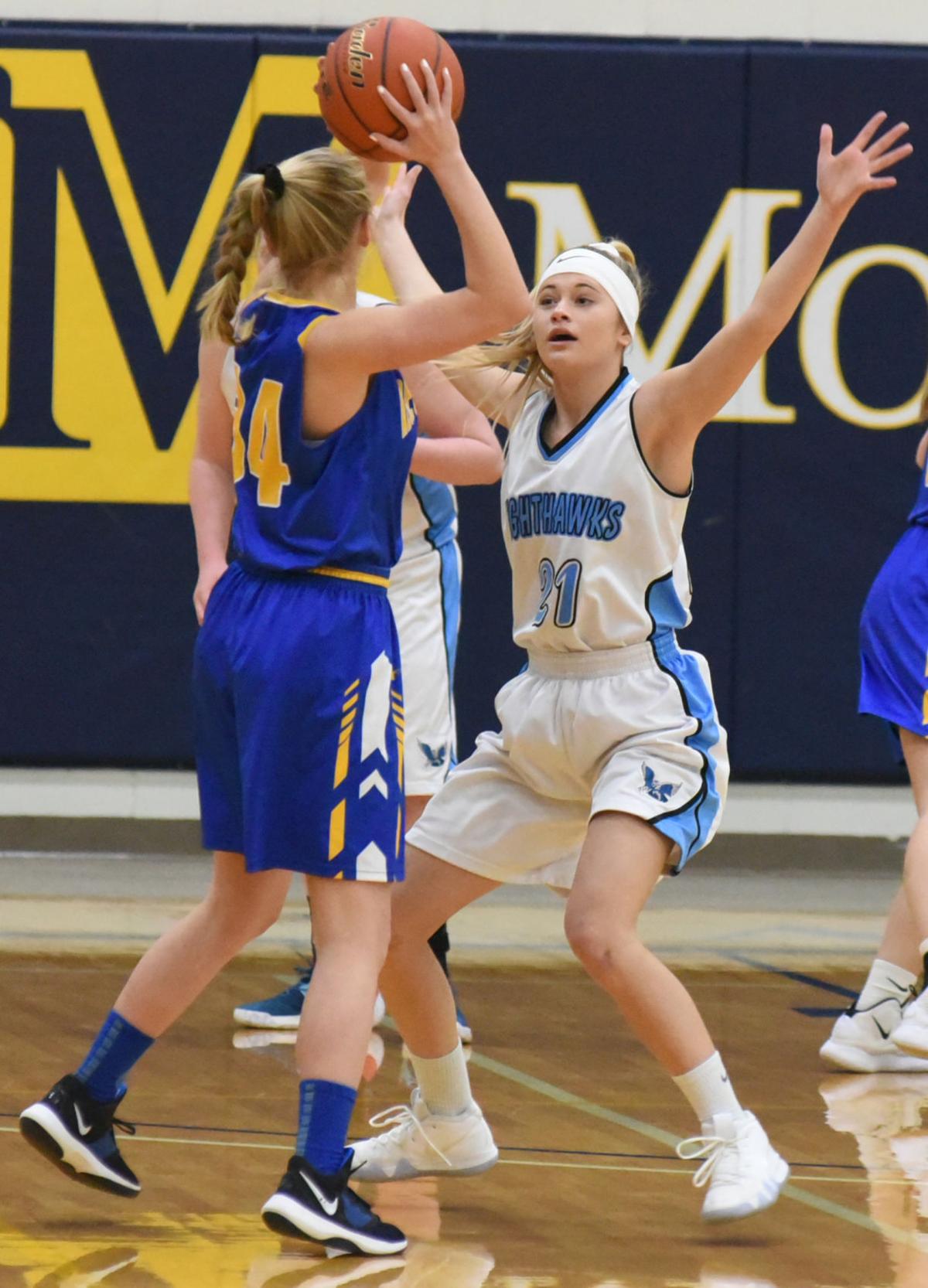 Tripp-Delmont-Armour guard Kianna Payer (21) defends a ball handler during the 2019 Great Plains Conference Clash At The Mount. Payer will compete in basketball and track for the Lancers, following brothers Tyler and Trevor to MMC. 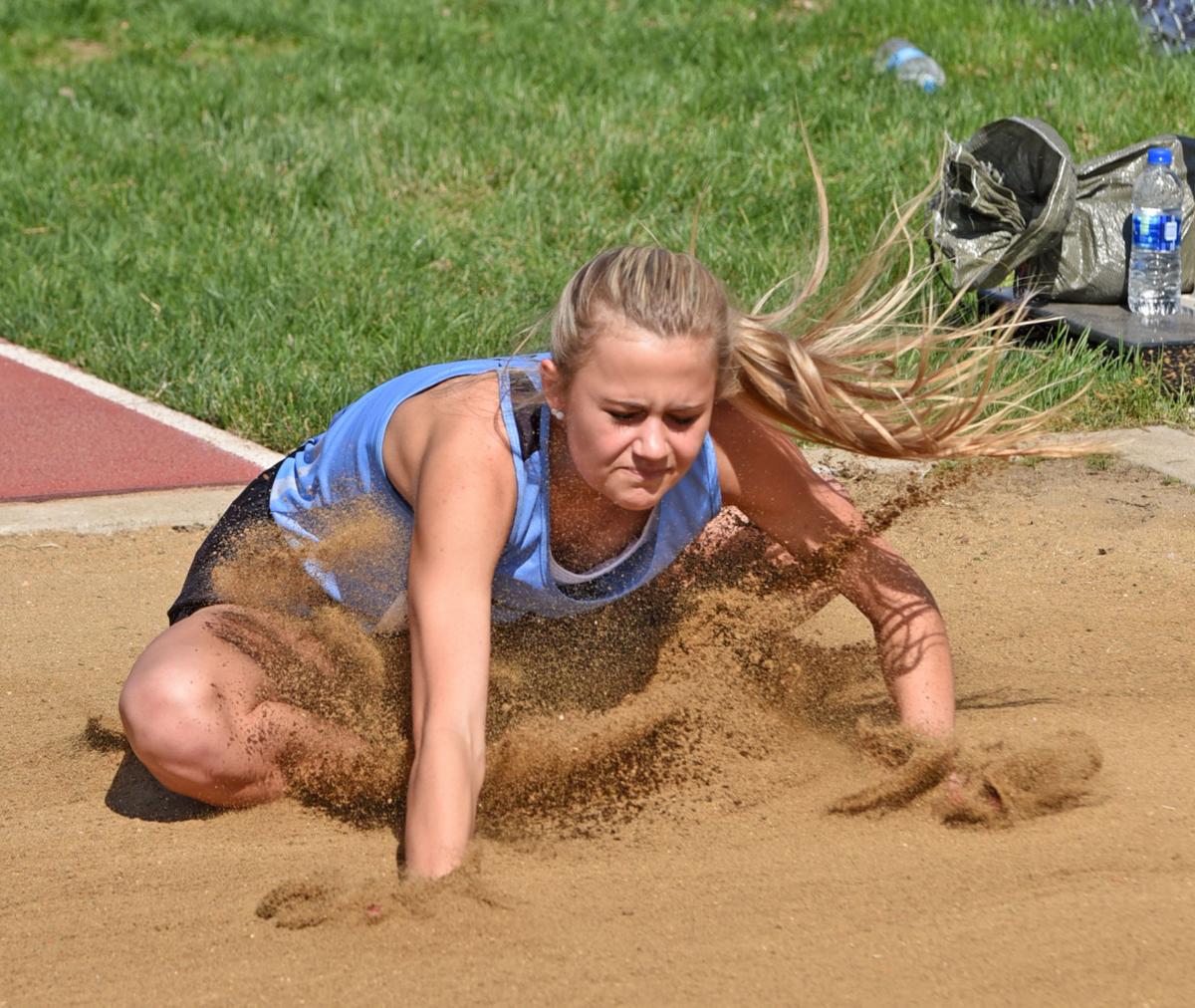 Tripp-Delmont-Armour's Kianna Payer lands in the sand during the girls' triple jump at the 2018 Howard Wood Dakota Relays in Sioux Falls. Payer will compete in track and basketball at Mount Marty.

Tripp-Delmont-Armour guard Kianna Payer (21) defends a ball handler during the 2019 Great Plains Conference Clash At The Mount. Payer will compete in basketball and track for the Lancers, following brothers Tyler and Trevor to MMC.

Tripp-Delmont-Armour's Kianna Payer lands in the sand during the girls' triple jump at the 2018 Howard Wood Dakota Relays in Sioux Falls. Payer will compete in track and basketball at Mount Marty.

At halftime of her brother’s college basketball games at Cimpl Arena in Yankton, Kianna Payer would run out to the court and shoot a free throw for a chance to win a bottle of soda.

Those ‘pop shots’ became a routine.

They also provided Payer with what would become an early glimpse of her future home: As a basketball player at Mount Marty College.

The senior at Tripp-Delmont-Armour recently signed to play basketball and compete in track at Mount Marty, the same school her older brothers Tyler and Trevor attended.

“I pretty much grew up there during basketball season,” Payer joked Friday afternoon.

Payer, a 5-foot-9 guard, eclipsed 1,000 career points at TDA and averaged 14.3 points per game last season as a senior. She was selected All-Little Missouri Valley Conference and All-Great Plains Conference three times in her career, and also played a key role on TDA’s 2018 squad that finished third at the Class B state tournament.

Basketball, Payer said, was something she grew to appreciate because her experiences watching her brothers.

“Not only is she athletic, but she ties that in with some really good basketball skills,” MMC head coach Todd Schlimgen said.

“She handles the ball so well and she has the kind of speed that we think will translate well to our level.”

The combination of athleticism and speed has also served Payer well in the sport of track and field.

Payer eclipsed 32 feet in the triple jump, and also contributed to TDA’s 400 relay, 800 relay and sprint medley quartets. She ran a leg on the Nighthawks’ Class B state champion 400 relay and 800 relay squads.

Track, she said, became a sport where she realized she could both succeed and train for basketball.

“When I found out I could be good at it, it became more enjoyable,” Payer added.

She will join a Mount Marty track program that will this fall move into the new Ruth Donohoe First Dakota Fieldhouse, which features an eight-lane, 200-meter track.

“We are excited for the addition of Kiana to our track program, as she has a lot of athletic ability with a great attitude and will be an asset to our women’s track team,” MMC head coach Randy Fischer said.

During her visits to Mount Marty, Payer said the basketball and track coaches made her feel wanted.

“Everyone made me feel really welcome and it felt like home to me,” she said. “That was a big deciding factor.”

In addition to her athletic success at TDA, Payer was also Valedictorian, a Student Council and National Honor Society representative, a Honor Roll selection all four years, an Academic All-State selection, and was chosen for the Governors Academic Excellence Recognition Banquet.

Payer will be a Radiologic Technology major at Mount Marty, and will be receiving an Academic Benedictine Scholarship and Heritage Award in addition to her athletic awards.