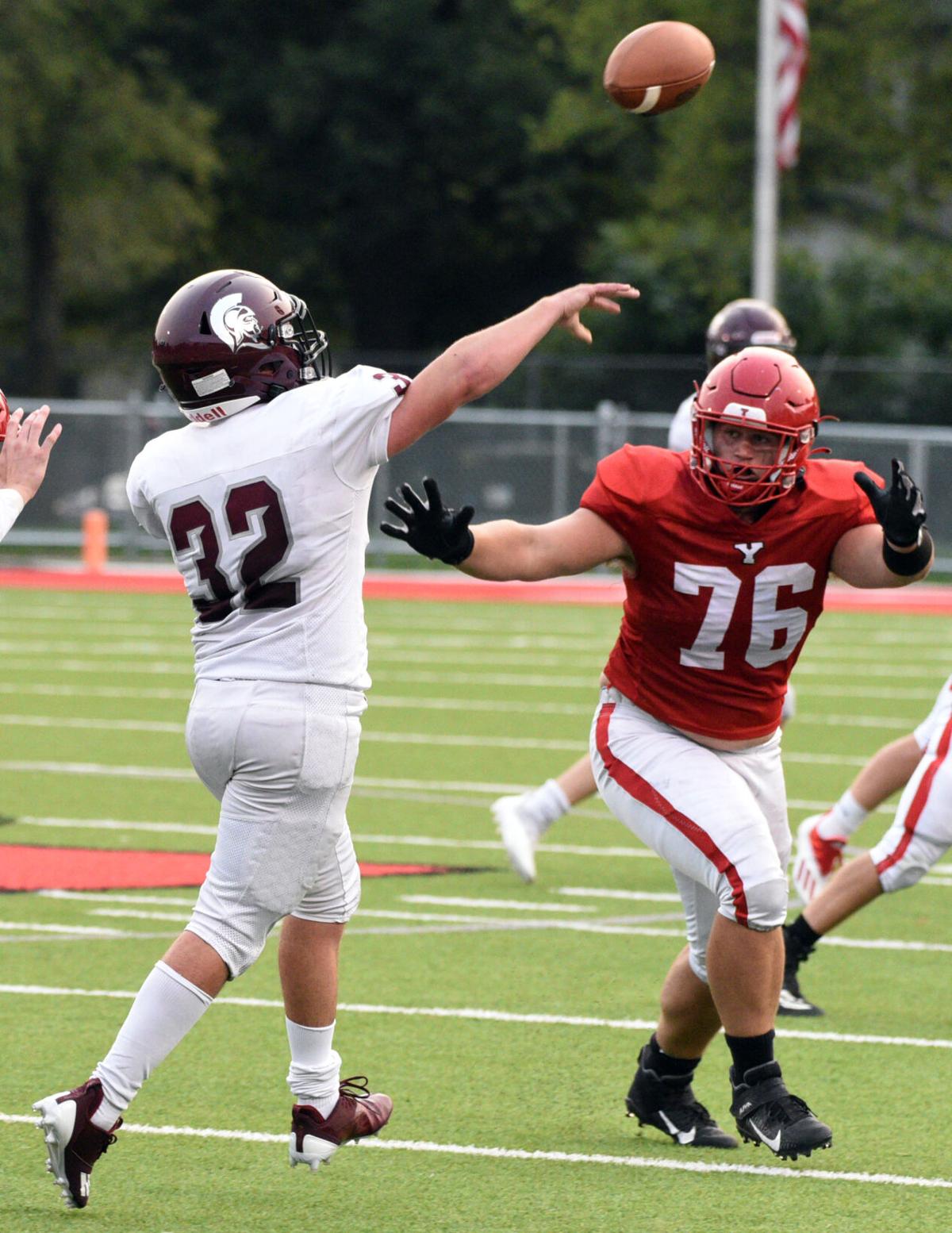 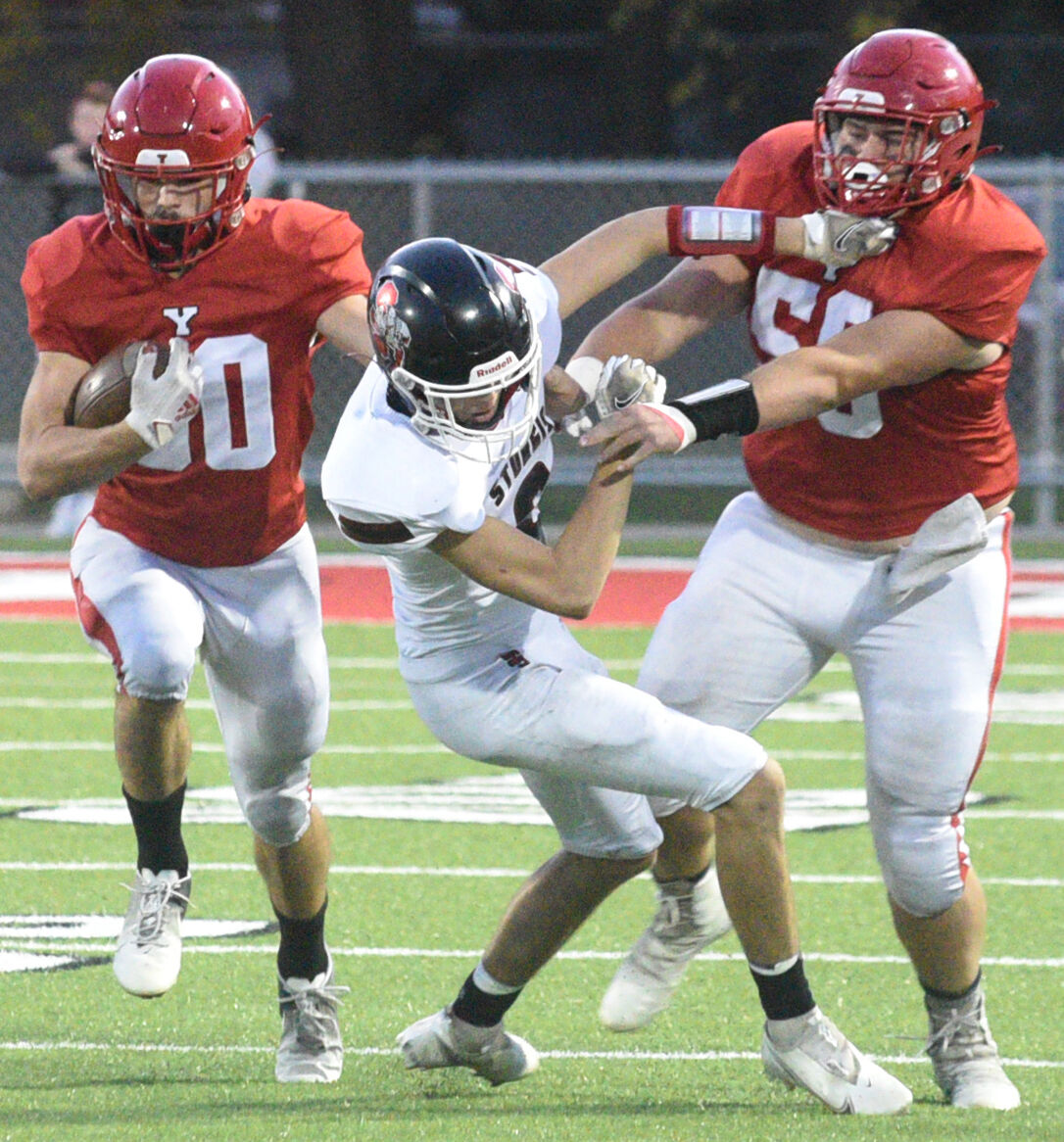 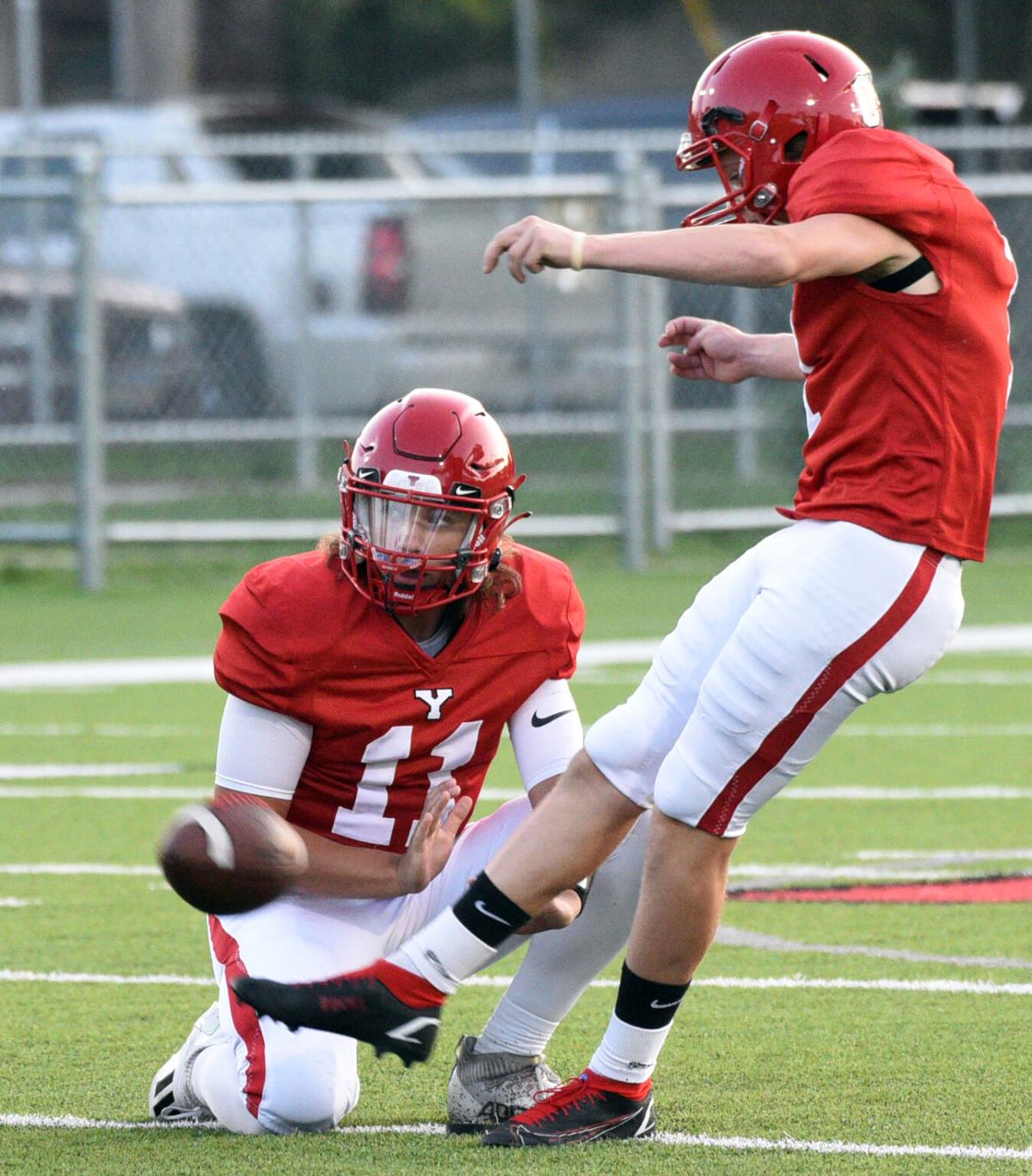 Yankton's Trevor Paulson kicks a field goal during a home game this season. Paulson was named All-State on special teams for Class 11AA, as chosen by the South Dakota Football Coaches Association. 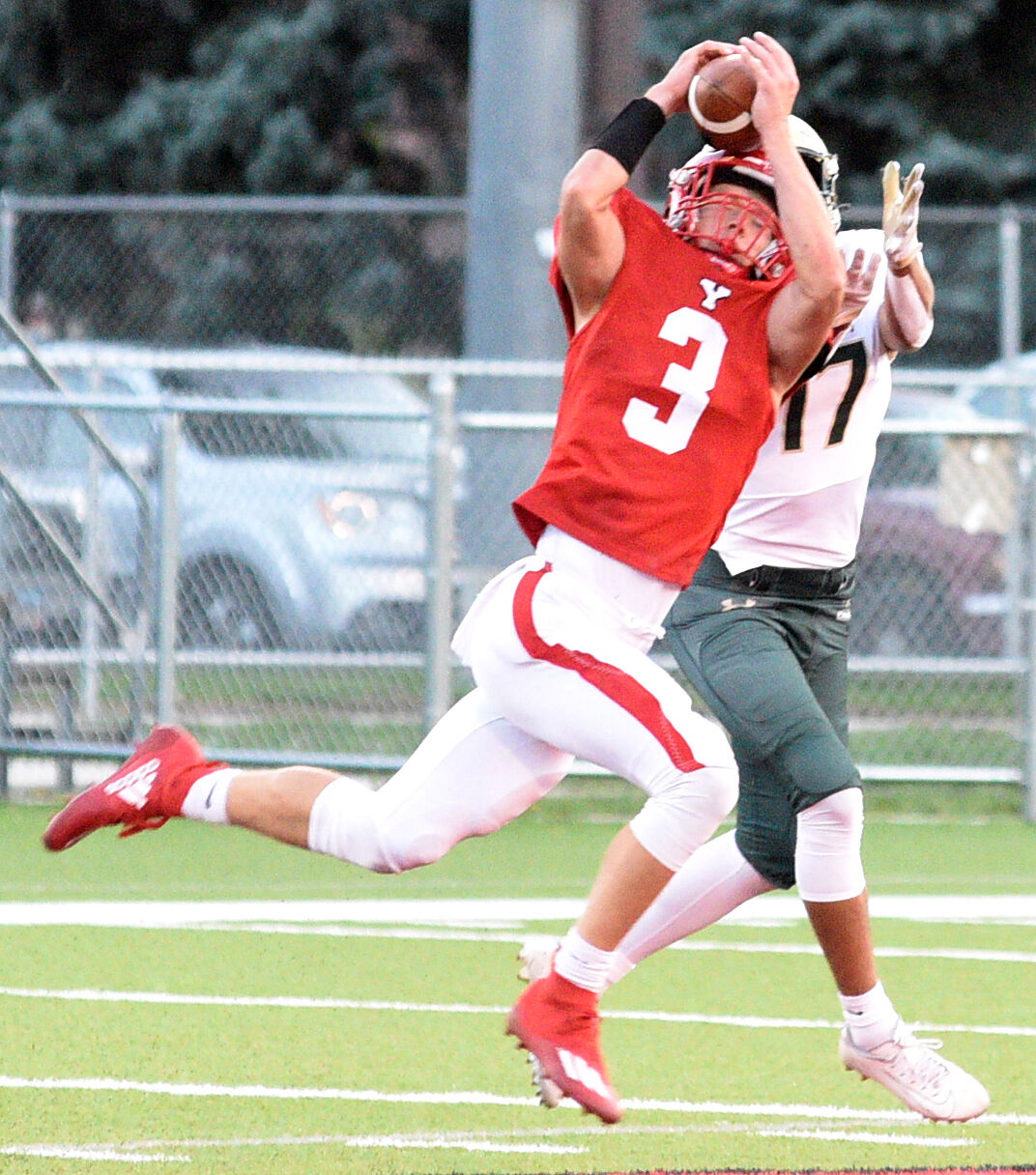 Yankton's Cody Oswald, 3, was named All-State at defensive back for Class 11AA, as chosen by the South Dakota Football Coaches Association. 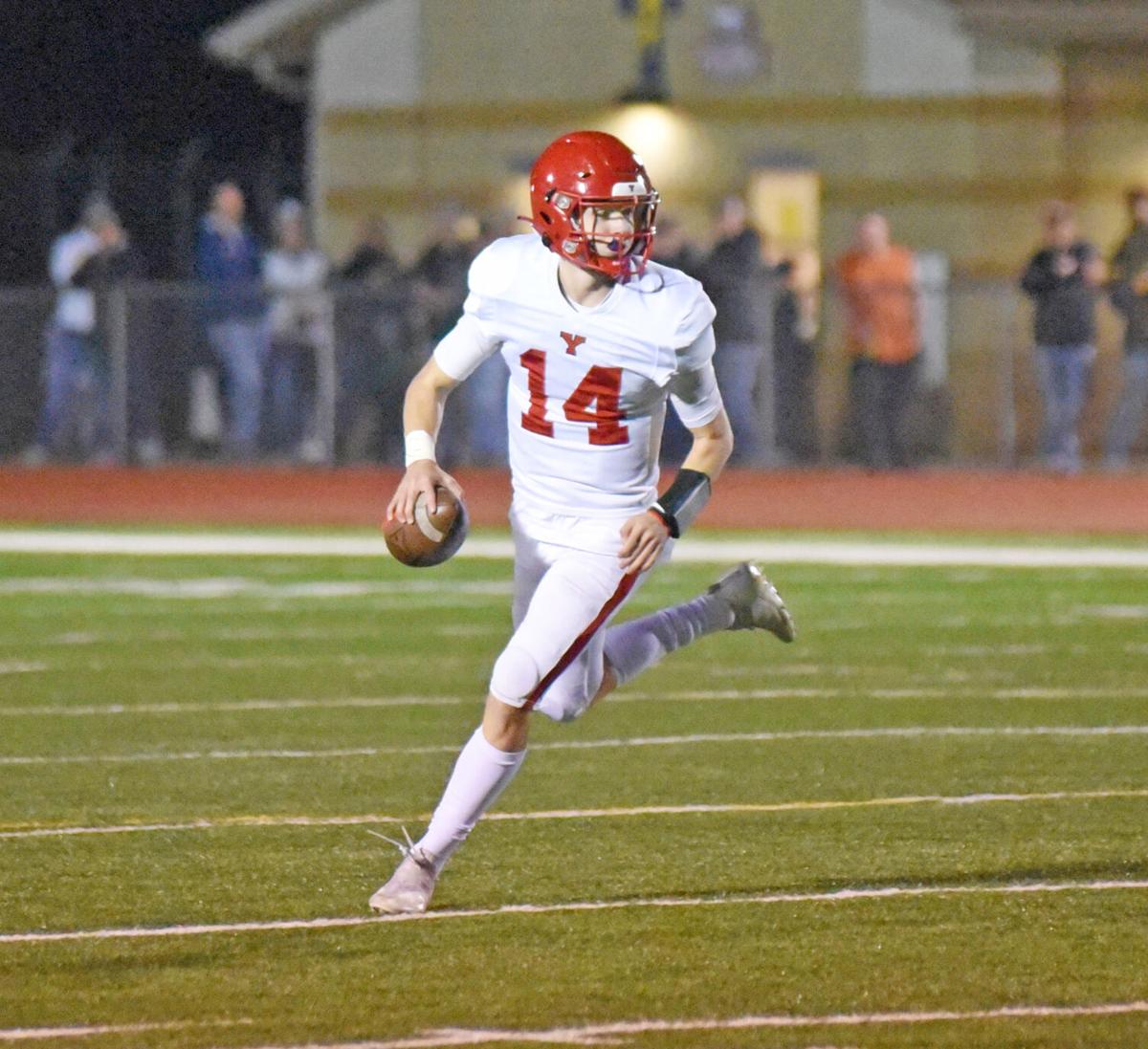 Yankton's Rugby Ryken was named All-State as an athlete for Class 11AA, as chosen by the South Dakota Football Coaches Association. 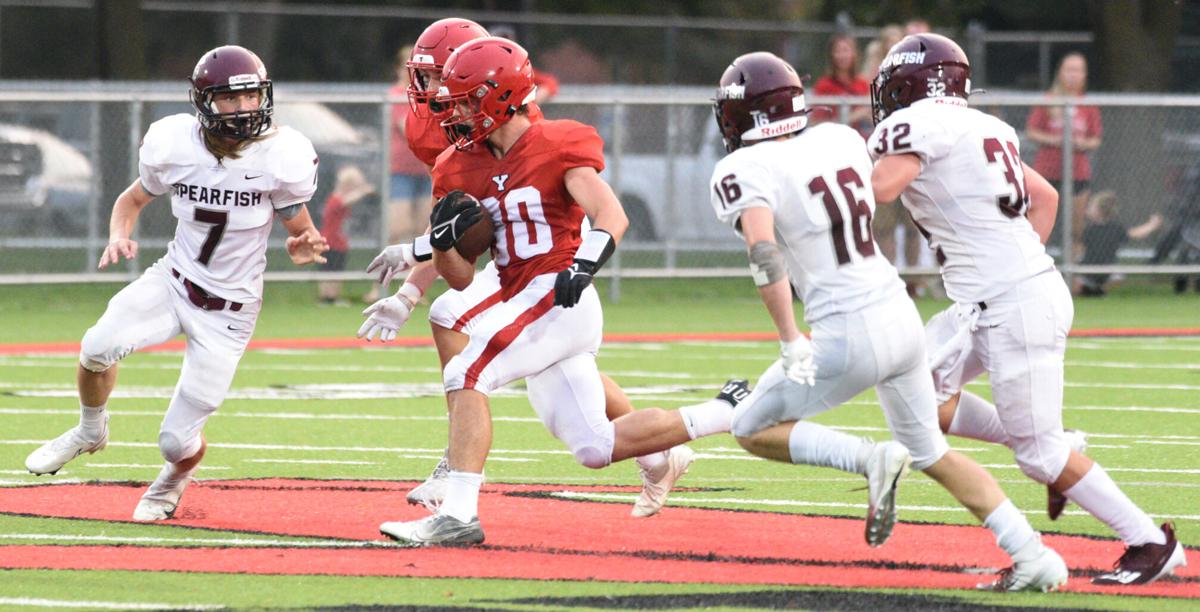 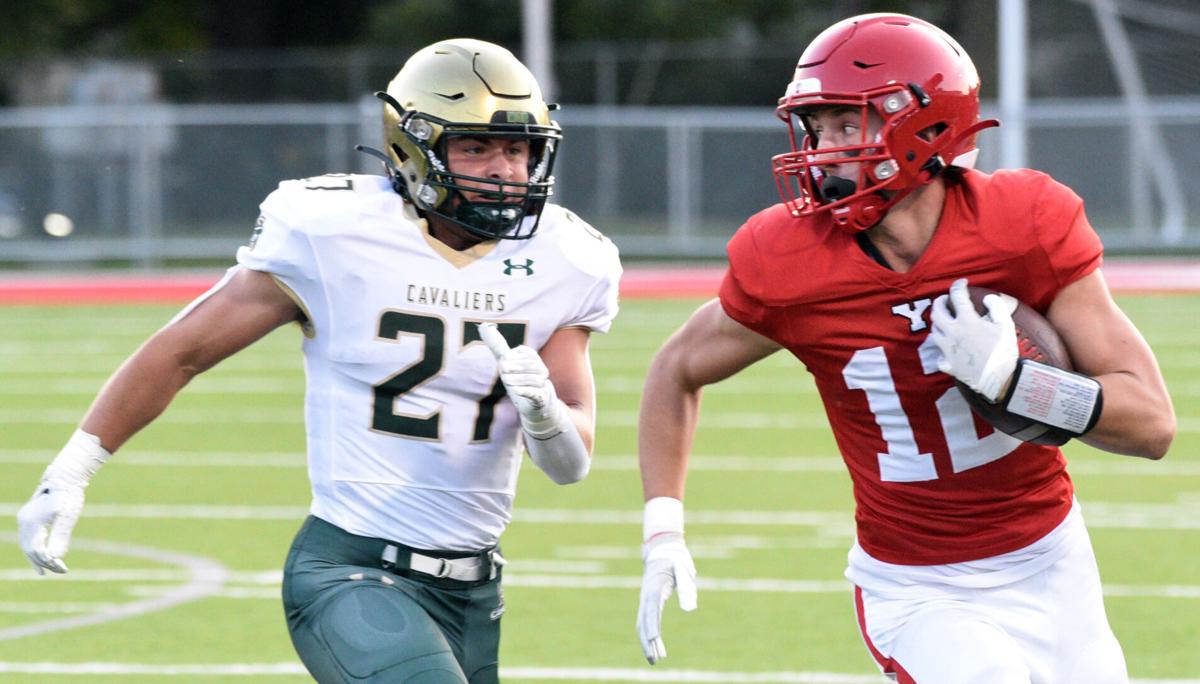 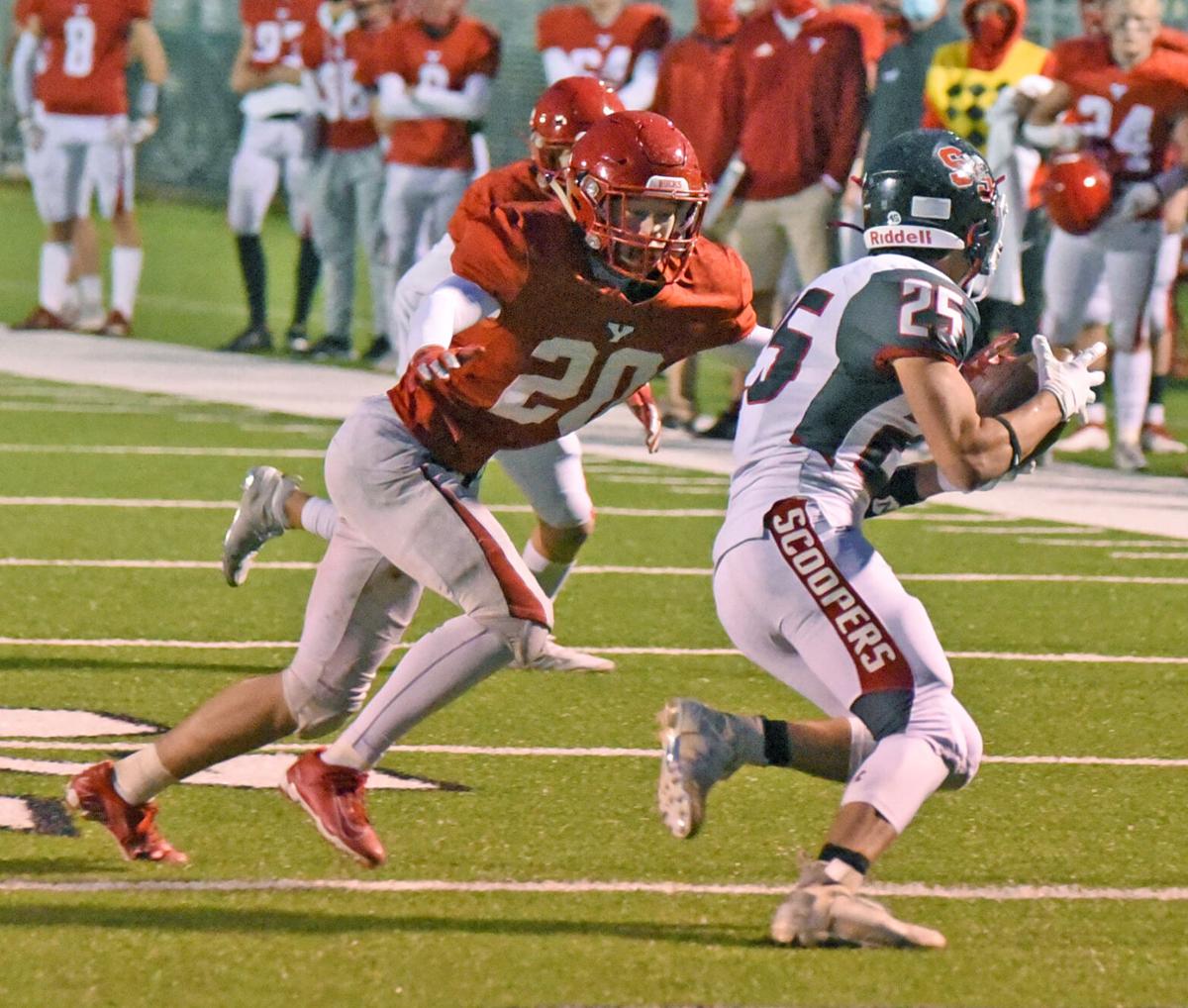 Yankton's Trevor Paulson kicks a field goal during a home game this season. Paulson was named All-State on special teams for Class 11AA, as chosen by the South Dakota Football Coaches Association.

Yankton's Cody Oswald, 3, was named All-State at defensive back for Class 11AA, as chosen by the South Dakota Football Coaches Association.

Yankton's Rugby Ryken was named All-State as an athlete for Class 11AA, as chosen by the South Dakota Football Coaches Association.

The 2021 Yankton High School football team made it to the Class 11AA Semifinals this season before a loss at Tea Area ended their season.

With the conclusion of the 2021 season came the Class 11AA all-State team. Five athletes were named on the team and three were honorable mentions for the team.

Rutledge and Haak both placed in the state track meet last spring, and them came around this fall to bolster the Bucks offensive and defensive lines.

Rutledge was a three-year starter for the Bucks and was the strongest player in the weight room Bucks head coach Brady Muth said. Rutledge tallied 24 tackles and 26 assists this season.

“For as nasty as he is on the football field, he’s a really nice kid,” Muth said. “(he’s) Just a lot of fun to be around. He’s got an interesting take on things; he’s paying attention to how many times he’s knocking other guys down and takes a lot of pleasure in it.”

Like Rutledge, Haak is a three-year starter for the Bucks line. Haak was a captain this season and an offseason captain prior to the season. Haak didn’t allow a sack all season.

“He’s been a leader for us, both on the field obviously, but also in the weight room and off the field,” Muth said. “Most importantly, the place he’s been the biggest leader for us has been in the hallways. He’s just a good kid.”

The Buck who might have received the most attention this season for his play was junior Cody Oswald. As a strong safety, Oswald tallied 56 tackles, 28 assists and four interceptions. As a wide receiver, Oswald set the state record for touchdown receptions, and was a difference maker in the special teams return game.

“He’s just a heck of a player and kind of a generational player,” Muth said. “You don’t get to coach a whole lot of guys like Cody. We’ve been lucky to have a couple of guys like that at Yankton, but I don’t know if they’ve been the same caliber that Cody is. And he’s got another year left so I’m excited to see what his future holds.”

The guy taking snaps from Haak and throwing them to Oswald this season also received an all-state nod. Ryken, the junior quarterback, exploded for 2,536 yards passing and 29 passing touchdowns, a school record. Ryken added 488 rushing yards.

“The biggest thing with Rugby, he’s such a competitor and there’s no way to measure that,” Muth said. “There’s no stat for how competitive he is. You can measure his 40-time, which he’s got a good 40-time, but you can’t measure his competitiveness and that’s what really sets him apart.”

The Bucks punter and kicker found himself with an all-State nod this season as well. Paulson was 9-of-14 on field goals, but 8-of-9 inside 40 yards. He also connected on 98% of his point-after attempts.

Stewart, the Bucks senior linebacker, was an honorable mention to the team this season. Stewart tallied 49 tackles, 21 assists and eight sacks for the Bucks defense. Stewart was a three-year starter for the Bucks.

“Stewart has been a guy that plays with such reckless abandonment,” Muth said. “He was our sack leader, start off as a defensive back and then moved to a hybrid, to just playing linebacker this year.”

All three Bucks receivers were up for all-State this season as Cameron Zahrbock, Oswald and Tyler Sohler each had a strong season. The all-State receivers were over 1,000 yards, which with the way Yankton’s receiving core split the receptions, none of them were able to meet that number. Sohler did receive an honorable mention for his efforts.

Sohler tallied 41 receptions for 517 yards and eight touchdowns. With one season yet to play, Sohler has a chance to becoming the all-time leading receiver at Yankton High School. Sohler also played a portion of the season with a broken thumb.

“He’s going to be a four year starter for us and has a great chance to leave Yankton the all-time leading receiver,” Muth said. “He played half the season with a broken thumb. Your thumb and your index finger are the two most important parts of catching a football and he did a heck of a job for us, he’s a complete warrior.”

Raab, a senior tight end, found himself in an unfamiliar position that gave him a chance to play and he excelled. Raab tallied 25 receptions for 345 yards and three scores and contributed as a blocker in the run game this season.

“Max is one of those guys that is a quintessential teammate,” Muth said. “He does everything asked of him. He was the guys that got to play because of a situation where another player wasn’t able to play in a game, and ended up not just doing the job, but excelling at it.”

While the senior class, including, Rutledge, Haak, Stewart and Raab will be missed, the returning athletes, including Oswald, Ryken, Paulson and Sohler will look to continue to build next season.

“We’re excited,” Muth said. “We’re going to miss our seniors, we’re really thankful, but were also really excited about the guys that we have coming back next year. I know that for each of these guys getting recognition, I know that the best thing about it is they’re not satisfied because they know there’s more work to be done.”

Here is a look at other area athletes earning all-state honors: