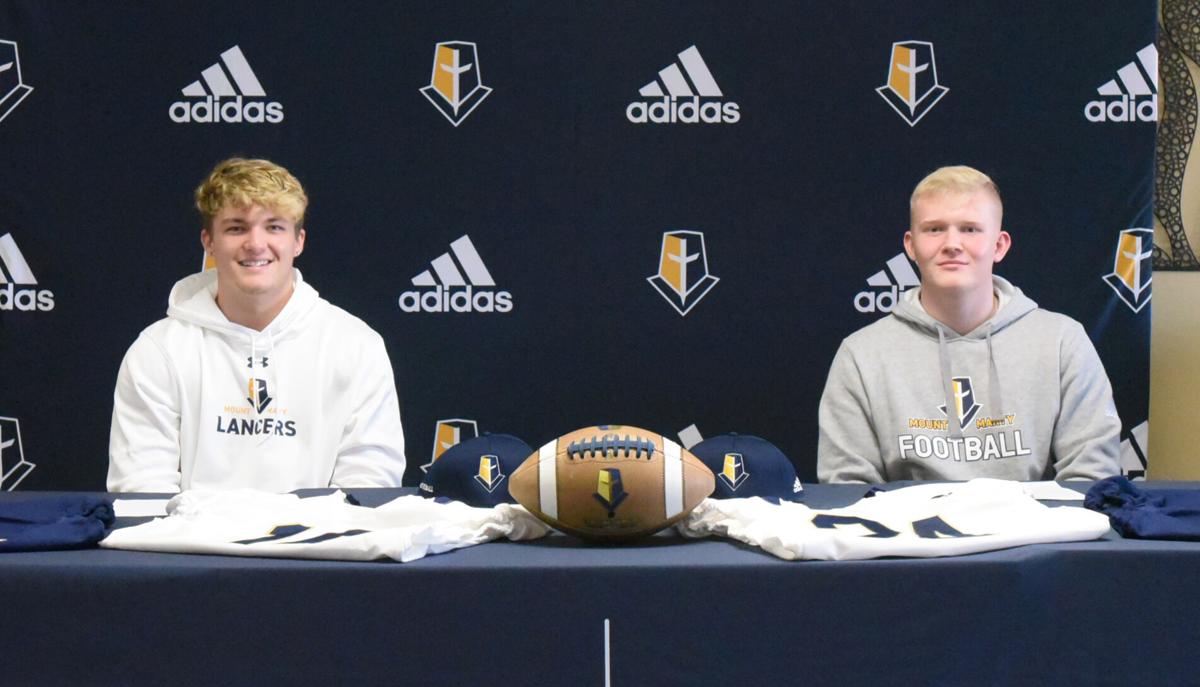 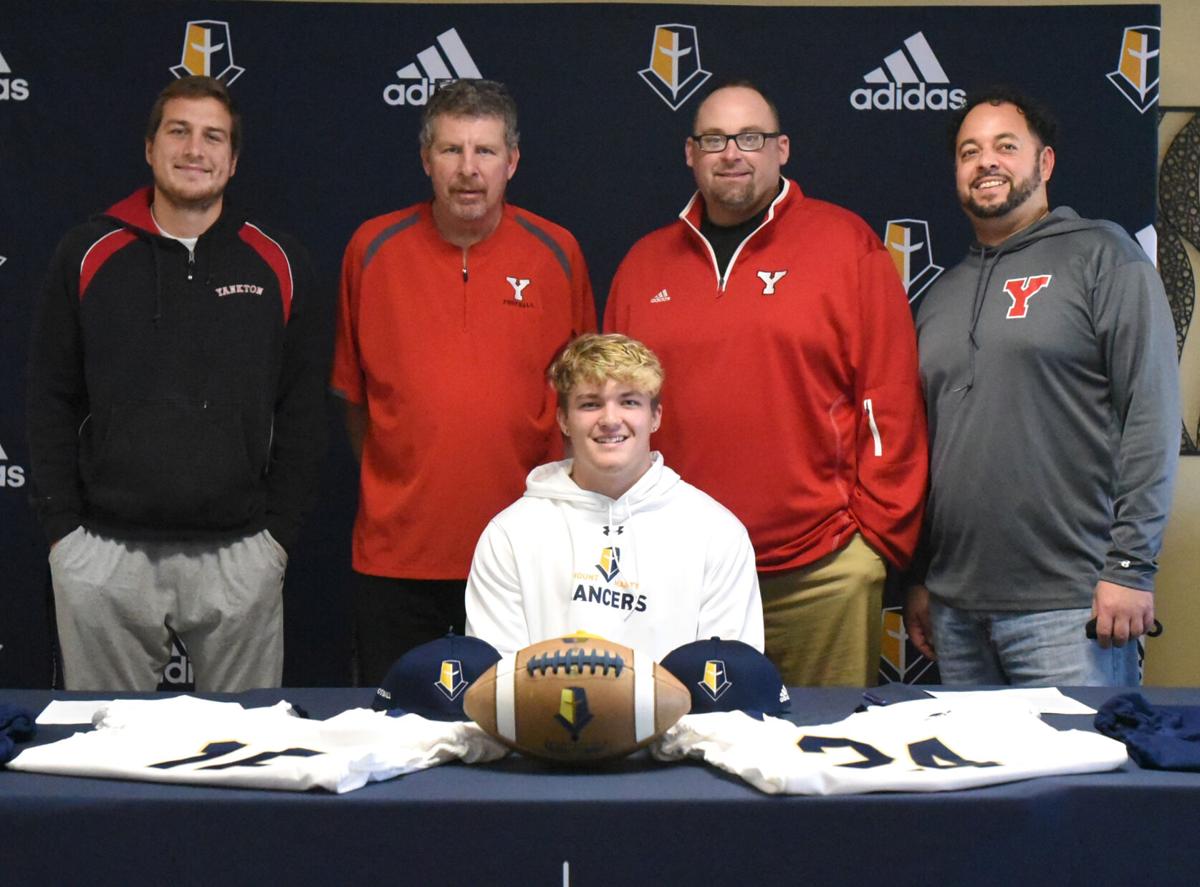 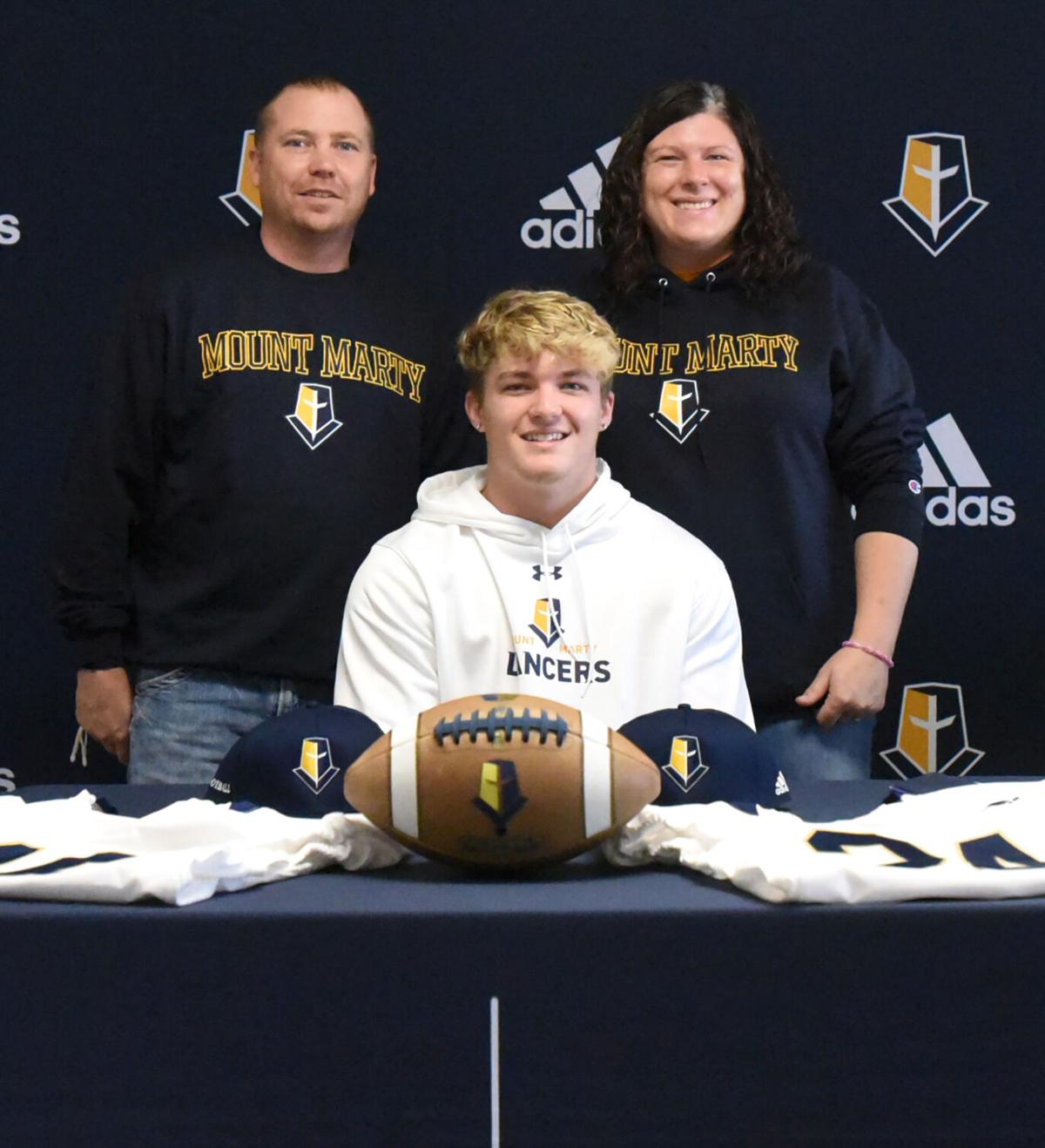 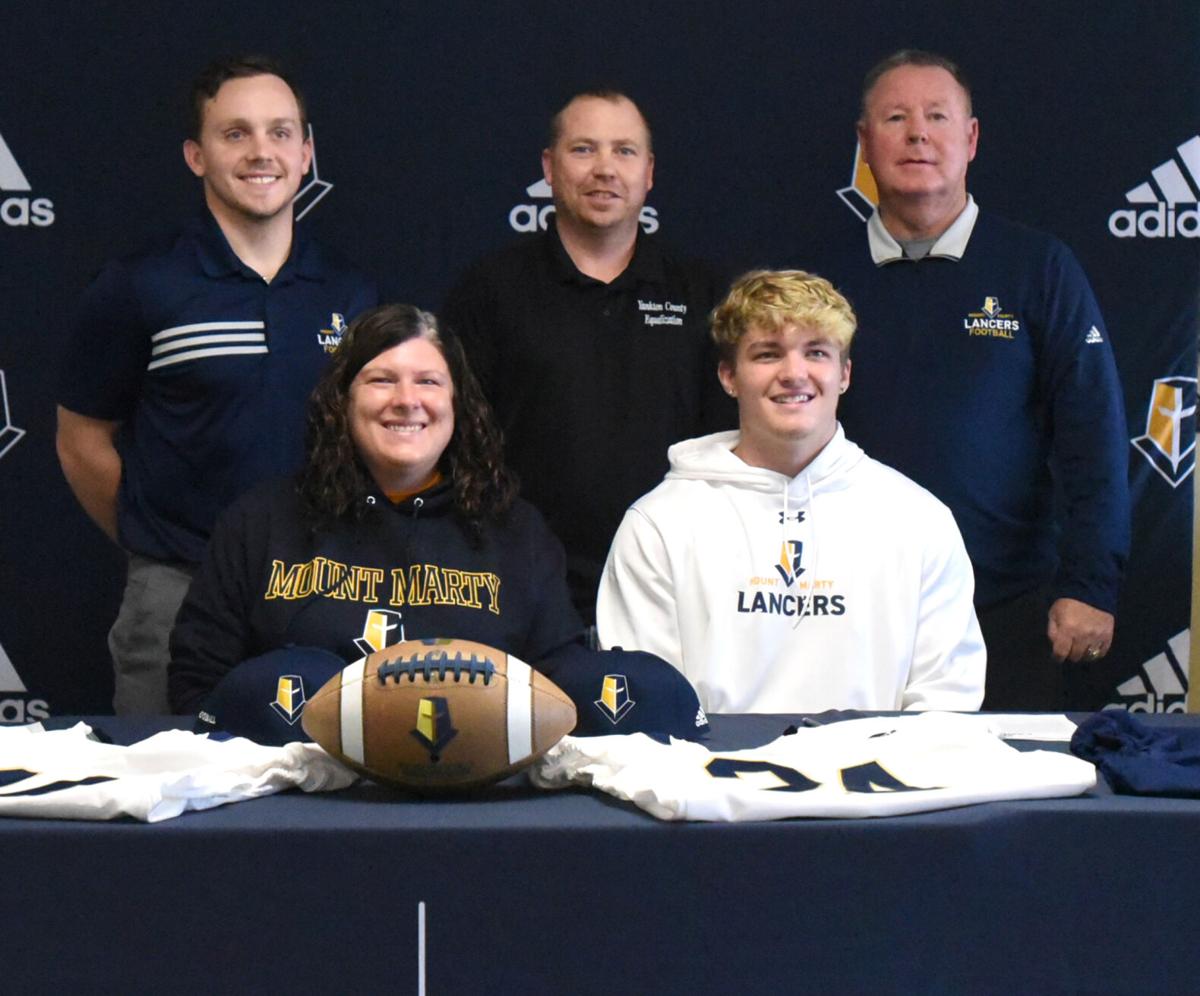 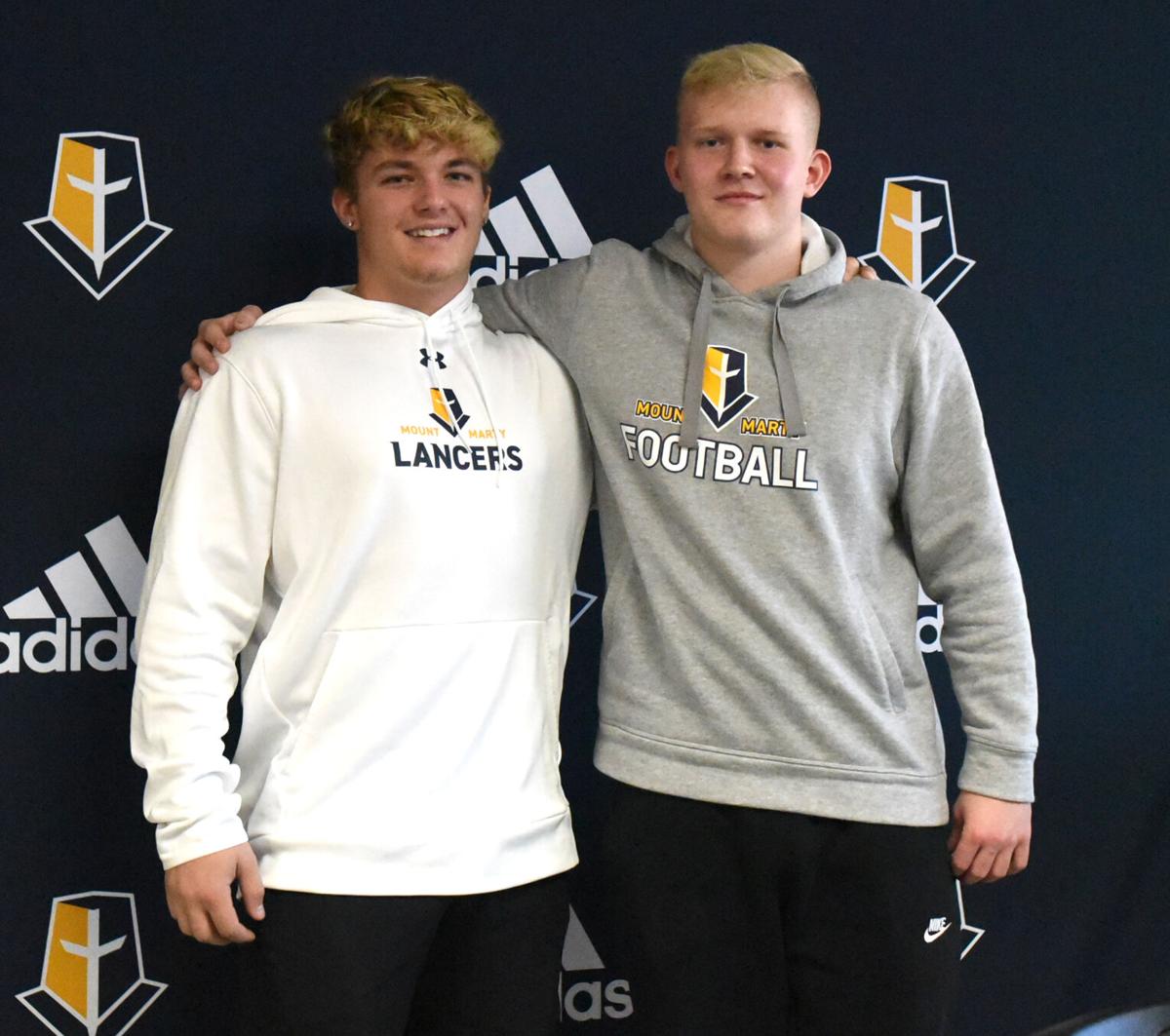 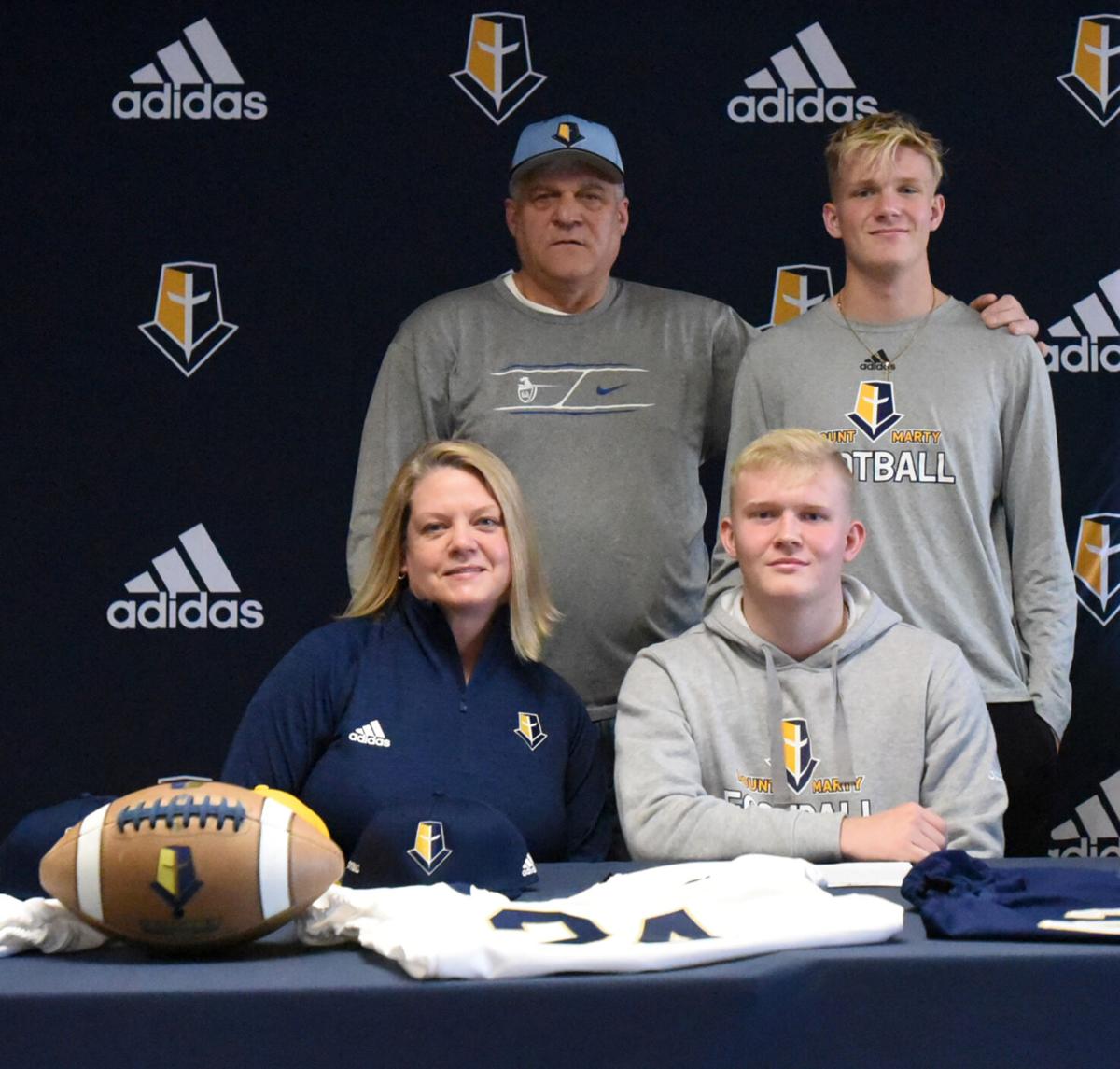 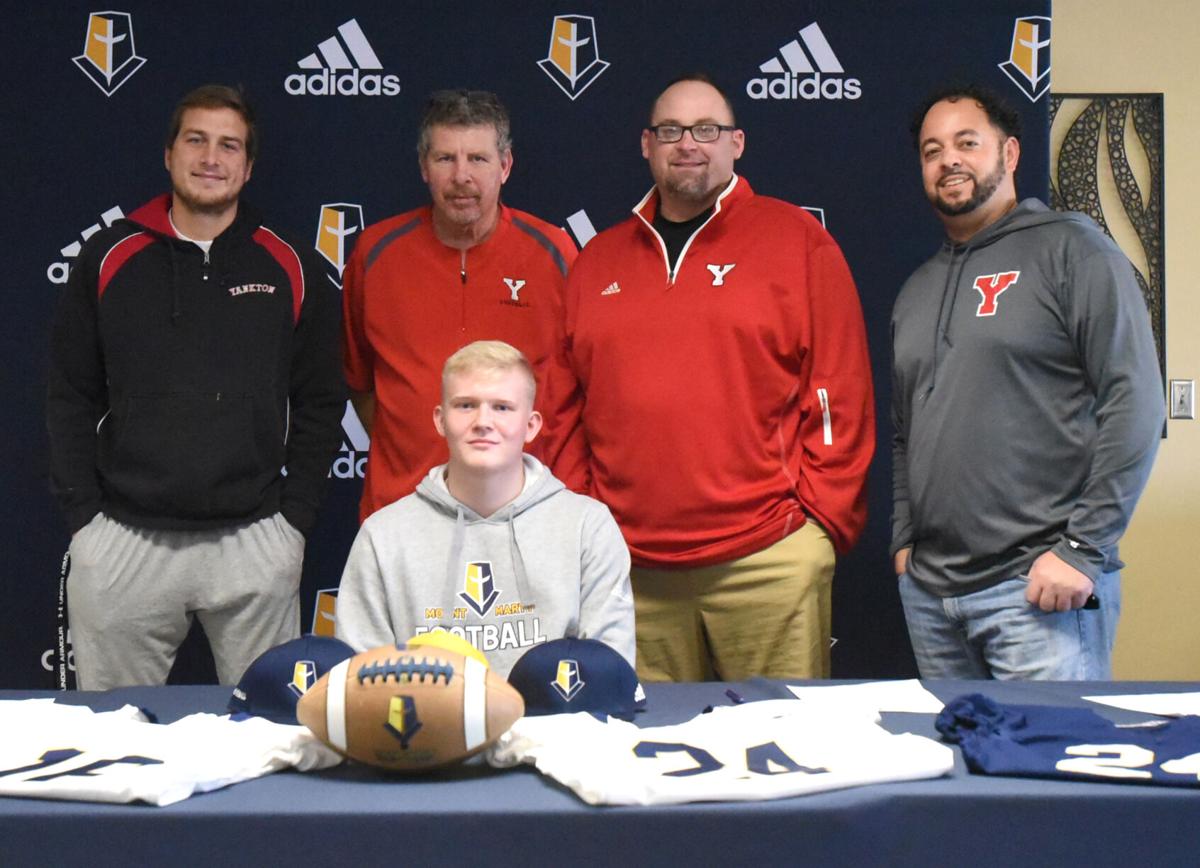 But what about after high school?

Brodey Peterson and Corbin Sohler, who have been best friends since sixth grade, have figured out a plan: They’re just going to keep playing football together.

The Yankton High School seniors officially signed Friday afternoon to attend Mount Marty University and play football for the Lancers, who will make their debut next fall.

When they put pen to paper during a signing ceremony on the MMU campus, they capped a conversation that began years ago.

“Corbin would tell me, ‘You could be good at this. You could play in college someday,’ but I never really thought much about it,” Peterson said.

“Once we got into our senior year, I just didn’t want this to end.”

Sohler, on the other hand, has always wanted to continue his football career beyond his days with the Bucks.

“Ever since I was little,” he said.

They’ll now each have that opportunity following standout careers at YHS.

This season, Sohler — who was coming off a knee injury that sidelined him all of 2019 — led Yankton with 884 rushing yards to go along with nine touchdowns. He also caught 13 passes for 221 yards and a score. Peterson, from his linebacker position, recorded 61.5 tackles (33 solo) with 3.5 sacks and two fumble recoveries.

Peterson was actually Yankton’s leading rusher as a junior, with 607 yards and five touchdowns, but transitioned to a full-time defensive spot this fall. He and Sohler, along with the other seniors, helped guide the Bucks (9-2) to the Class 11AA semifinals.

Both recruits said Mount Marty’s announcement in April 2019 started them down a path that led them to consider staying home to play football.

“When they announced they were adding football, I started thinking about it,” Sohler said. “It put that bug in my ear that I could keep playing football close to home.”

Once Yankton’s season began this fall, the Bucks were able to utilize Mount Marty’s new Ruth Donohoe First Dakota Fieldhouse for their work with Coach Rozy (with Avera Sports). There were a few occasions when the Mount Marty football team was practicing inside at the same time, which gave the Bucks a brief early glimpse at the Lancers.

“The coaches have all been great and welcoming, and we had heard some great things about coach (Mike) Woodley and what he’s done,” Peterson said.

Sohler and Peterson were also among a group of YHS players who attended a public Mount Marty football scrimmage event on Oct. 17 at Westside Park.

“That’s when I knew this is what I wanted,” Sohler said.

It was an ‘eye-opener’ for Peterson, he said.

“We got to see them practice up close and I could see myself out there,” Peterson said. “It was faster than high school and the guys were bigger, but it made me really think about it.”

Between now and when the pair officially step on the Mount Marty campus next fall to begin preseason work, they want to continue work on getting bigger and faster to prepare themselves for the college ranks.

“We’re just really excited,” Peterson said. “We’ll listen to everything the coaches say and do what they ask of us, because we just want to keep playing.”

Although Mount Marty already has its inaugural recruiting class on campus (they completed a full fall practice schedule), Peterson and Sohler will be part of the group that takes the field for the first time in school history.

“We’ll get to be the first players to ever play for Mount Marty. That’ll be something we can always mention when we’re older,” Sohler said.