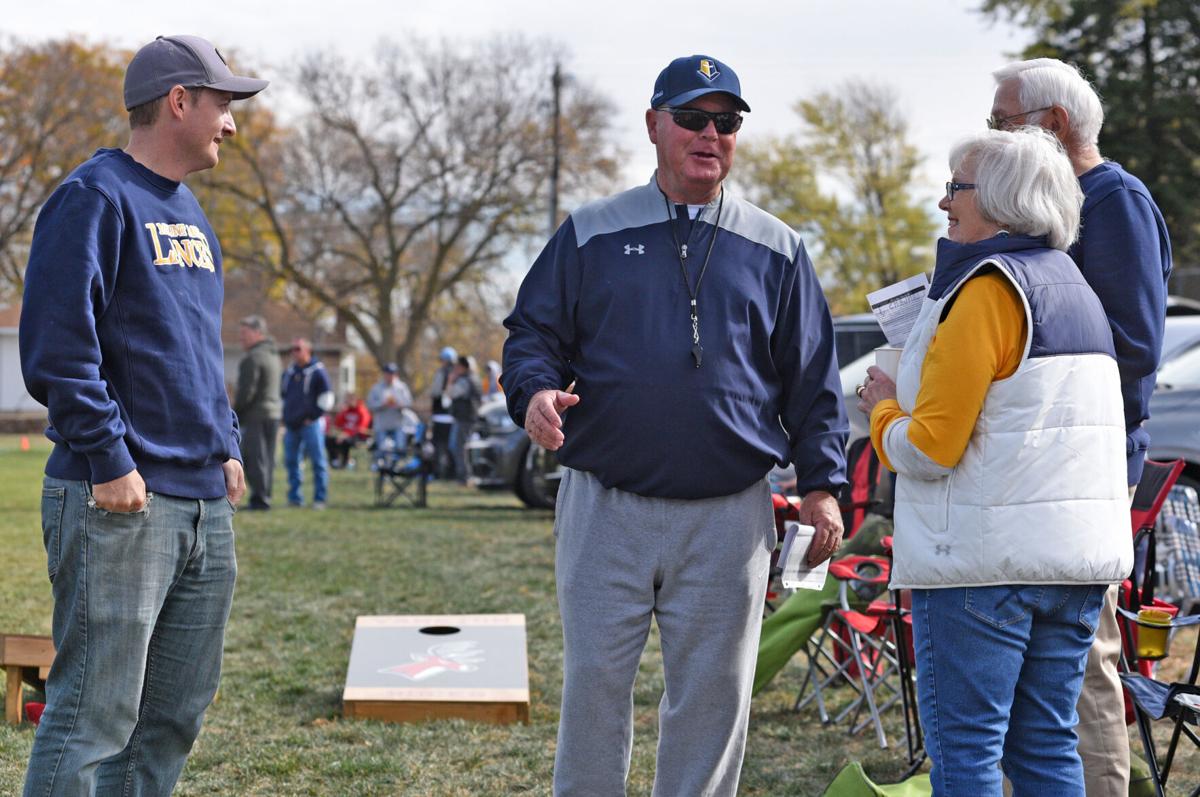 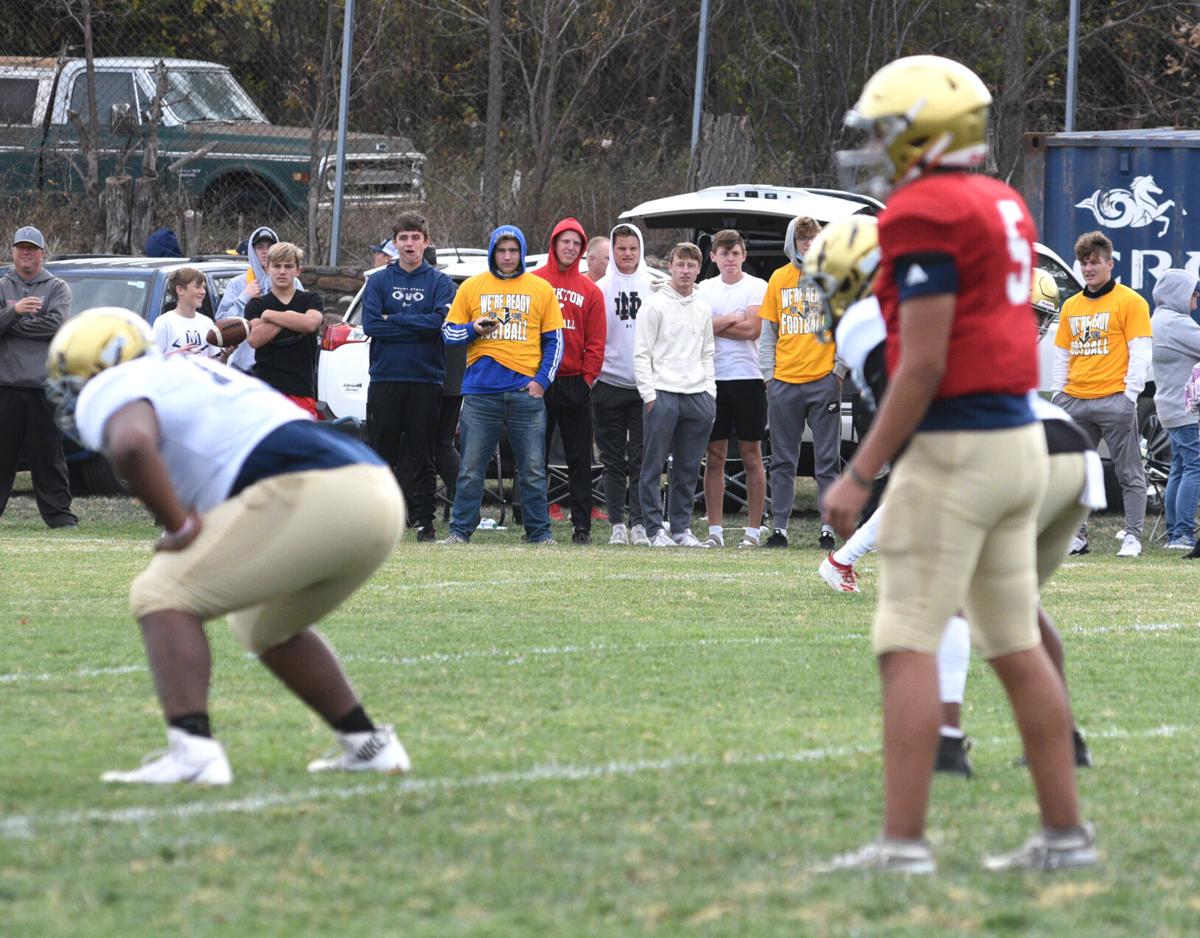 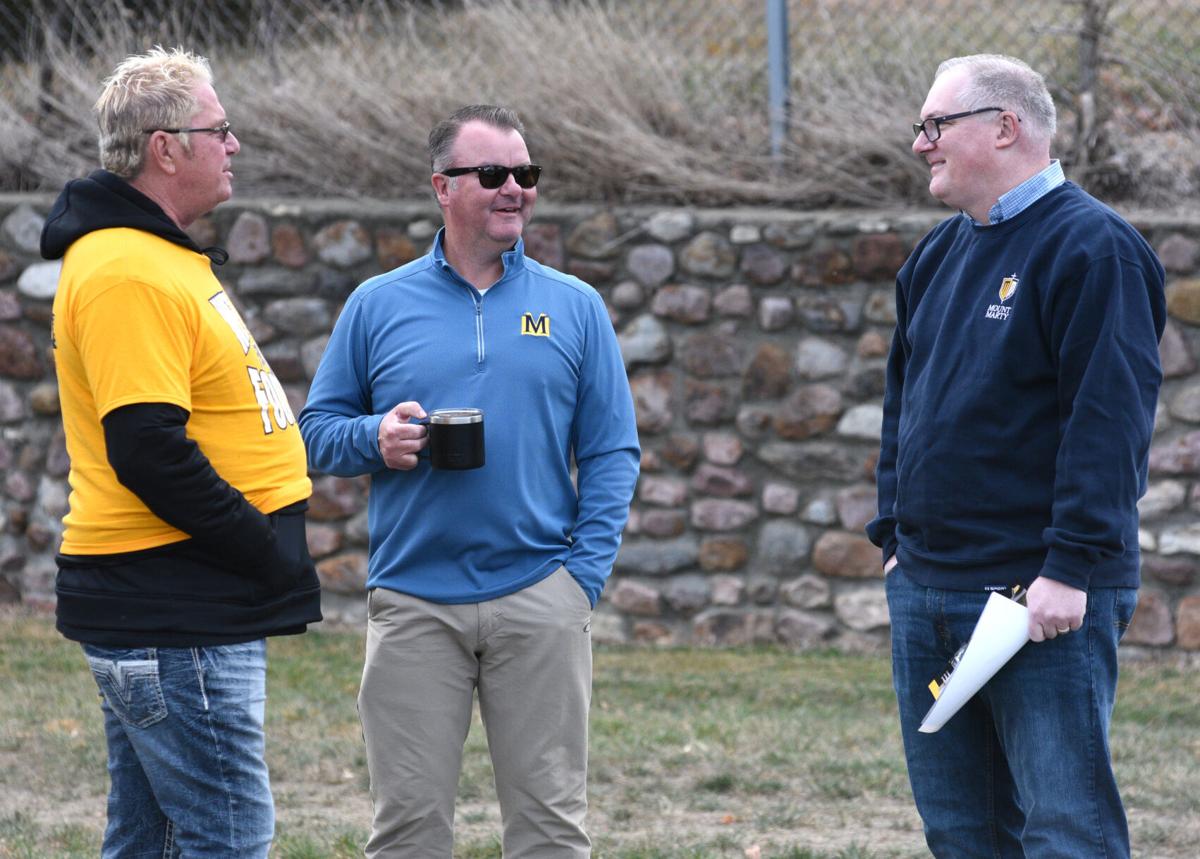 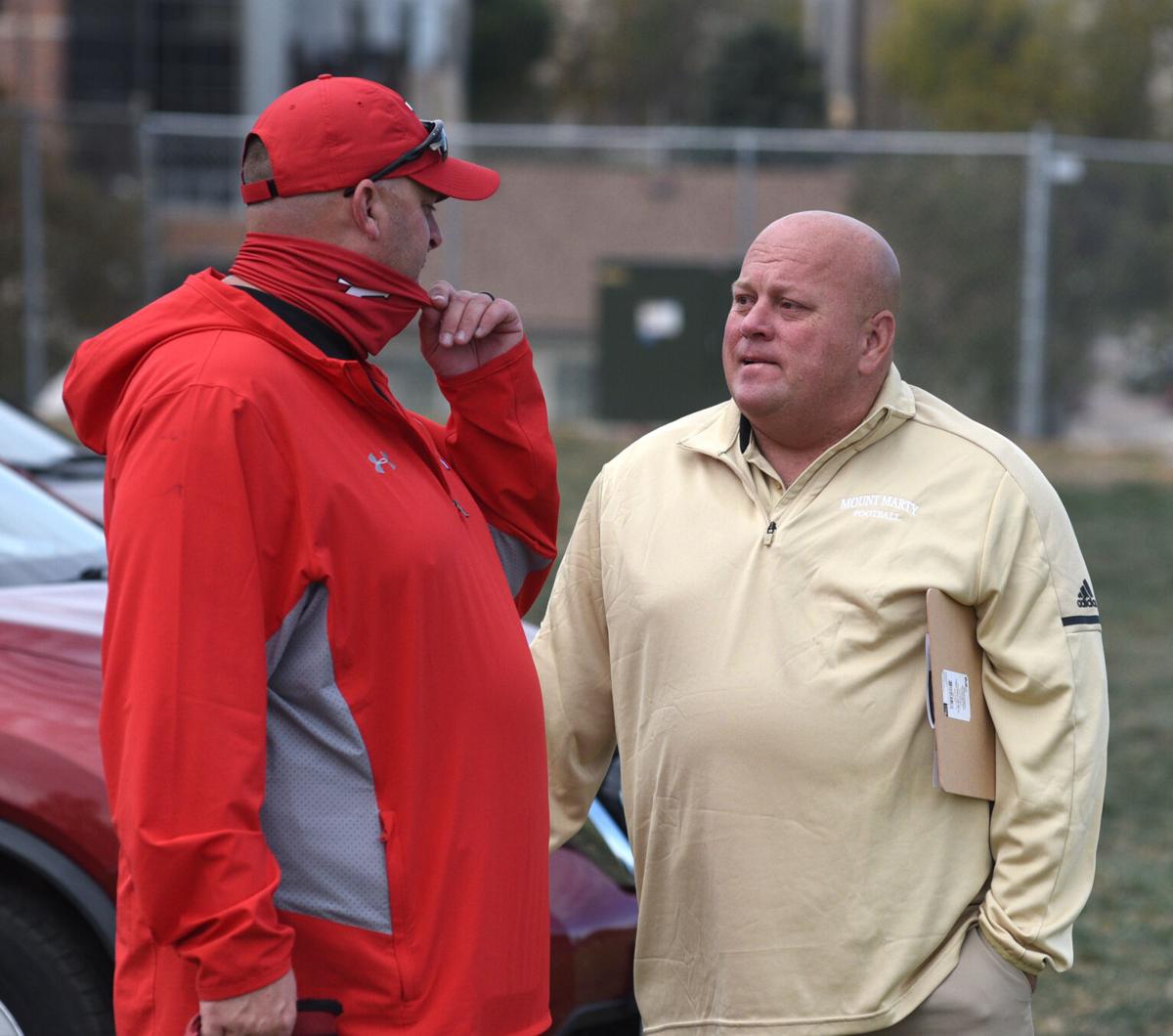 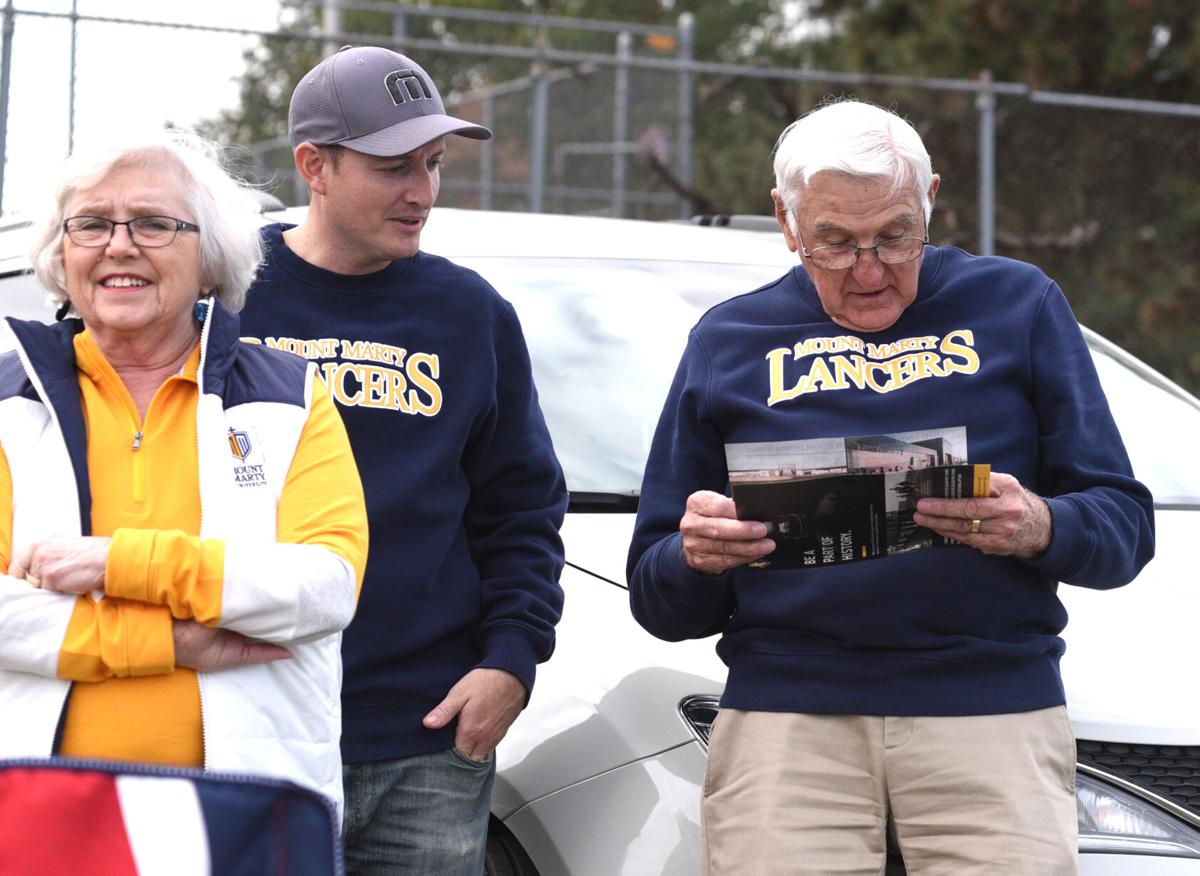 Rudy Gerstner, right, looks at a brochure as he stands next to two fans during Saturday's tailgate event and football scrimmage at Westside Park.

Rudy Gerstner, right, looks at a brochure as he stands next to two fans during Saturday's tailgate event and football scrimmage at Westside Park.

They had heard the line many times.

But how could they know for sure until they saw it with their own eyes?

Any level of curiosity was satisfied on Saturday as the Mount Marty University football players walked on to the Westside Park practice field for a full scrimmage.

What they saw told them all they needed to know about the length that their new community will go to watch them play.

“It definitely lived up to the hype that this is a football town,” said freshman Dylan Boucher, a defensive lineman from Orangevale, California.

In what was everyone’s first public glimpse of each other since Mount Marty brought in its first recruiting class this fall, the Lancers went through a 50-snap scrimmage that was part of an event that included a tailgate gathering at Westside Park.

Spectators were allowed to drive their vehicles into the complex, and the turnout — at least a couple hundred — far exceeded what players, coaches and administrators expected, they said afterword.

“I thought it was electric,” said freshman Charlie Gale, a wide receiver from North Platte, Nebraska.

“It felt like half the city of Yankton was out here.”

Saturday marked the 24th practice of the fall for the Lancers, who are spending this year preparing for the program’s debut next fall. It was no average practice, however.

“I was really kind of blown away,” head coach Mike Woodley said. “Once I was out here, you could feel the excitement.

“I’m very appreciative of all the Yankton fans.”

The public tailgate event was organized by Mount Marty as a way to introduce fans to the school’s new football program, according to athletic director Chris Kassin.

“We didn’t know what to expect, but there’s definitely a lot of buzz for this team,” he said.

A handful of fans mentioned that there was also significant interest to see college football in person in Yankton for the first time in nearly three decades — since Yankton College closed in 1984.

Woodley said he took the job at Mount Marty with appreciation that Yankton was a town that loves its football, and that it supports the Yankton High School program and once supported the Yankton College program.

“It was awesome to have all these people here to support us and watch us,” Woodley said.

“It was something that gave our guys a lot of adrenaline.”

For Ryken and Justin Cap (another Yankton native), the scrimmage marked their first official football action in front of their home fans since the fall of 2018.

“It was really cool to have something like this here,” said Ryken, who had many family members in attendance.

“I wasn’t sure, but there were more people than I expected,” he added. “We’re thankful for them.”

Just as the players were curious to see what the turnout would be Saturday, perhaps the fans were just as curious to see the Lancers, according to Ryken.

“I’m sure they were anxious to see what we had and what we’re doing out here,” he said. “Hopefully they’ll be even more excited when we start playing games.”

Mount Marty has six practices remaining this fall (hopefully with one more scrimmage, according to Woodley), and the buzz for the program should only continue to grow, according to Kassin.

Mount Marty will make its official debut on Sept. 4, 2021, when it will host rival Dakota Wesleyan University at Crane-Youngworth Field.

If the attendance Saturday for a scrimmage was any indication, there could be an even larger crowd in attendance for an actual game, according to Gale.

“This is the best football town I’ve been to,” he said.