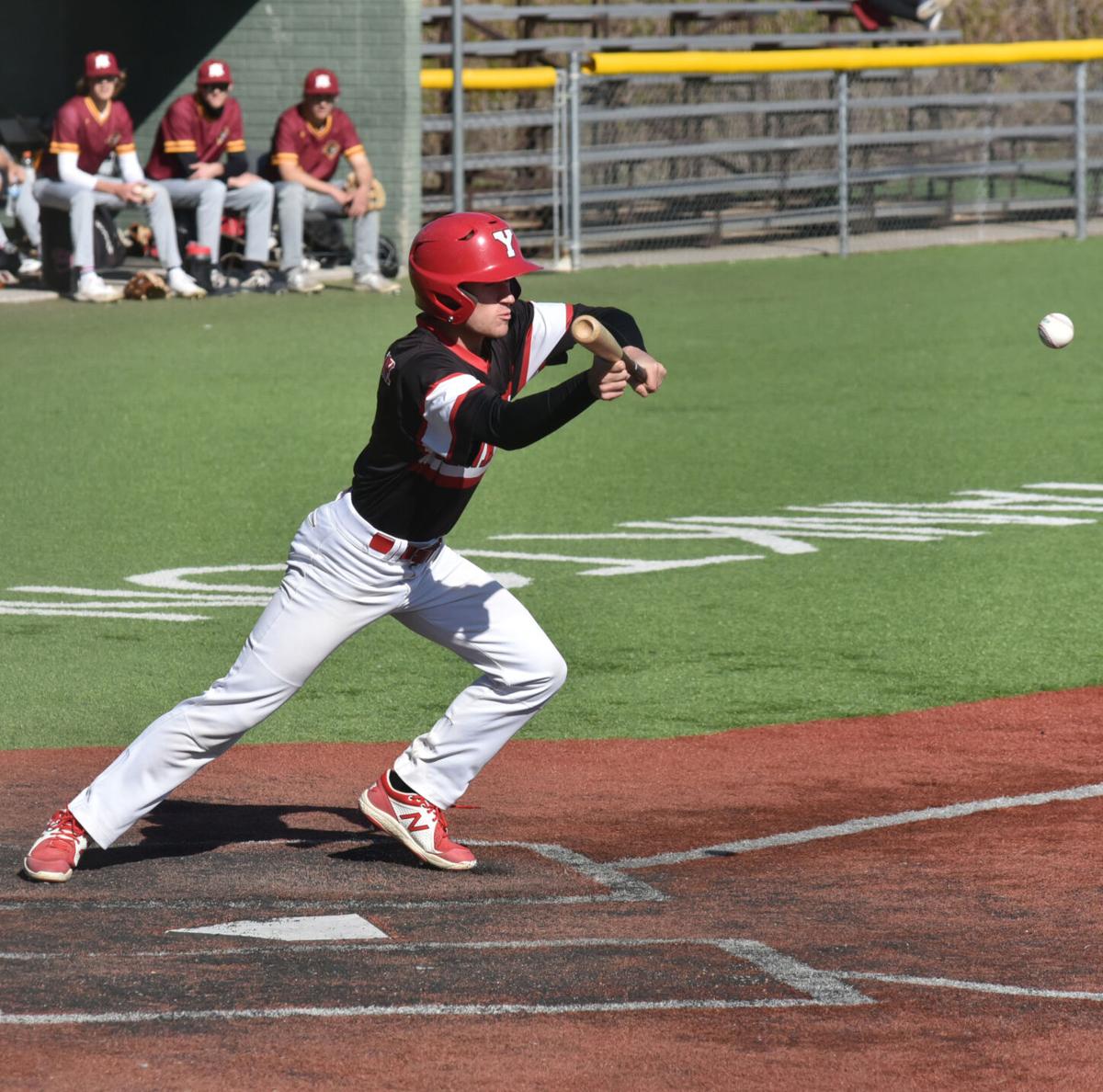 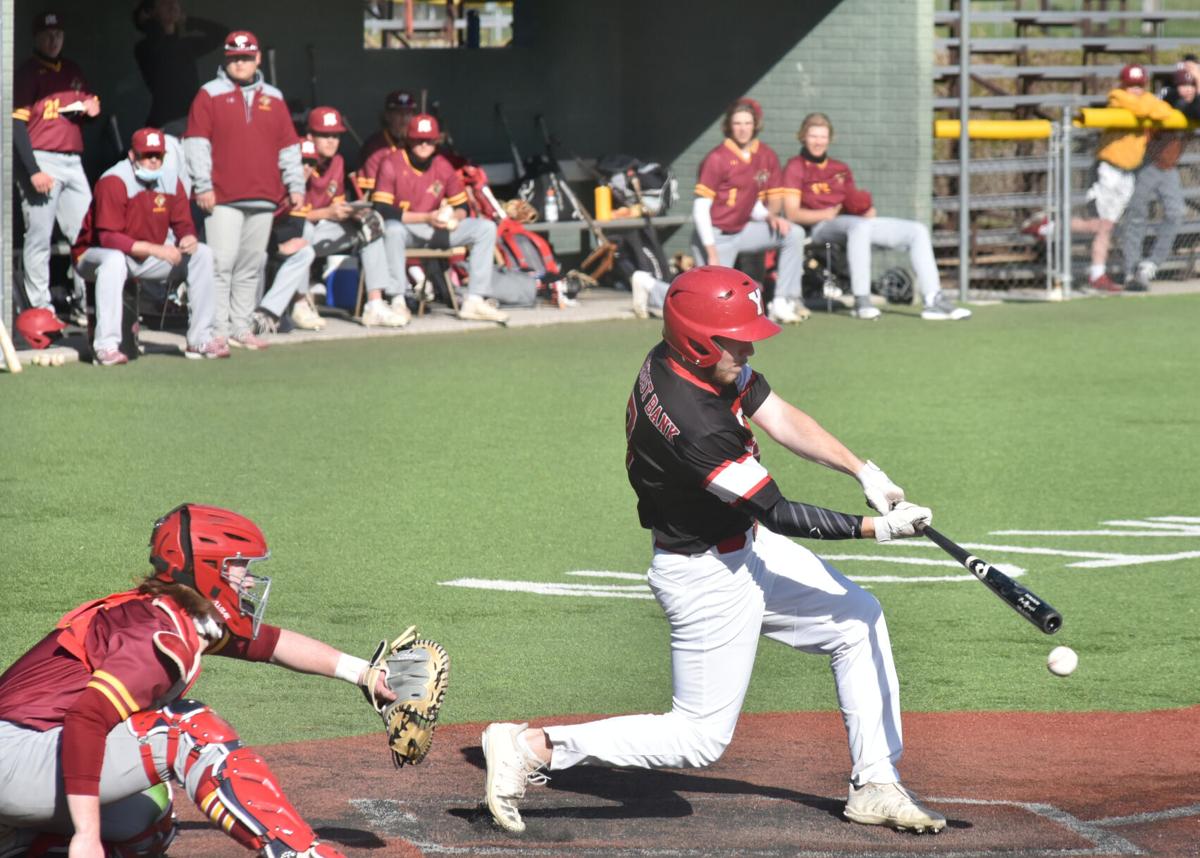 Yankton's Jacob Larson hits a pitch off the end of the bat during Monday's doubleheader against SIoux Falls Roosevelt at Riverside Field at Bob Tereshinski Stadium. 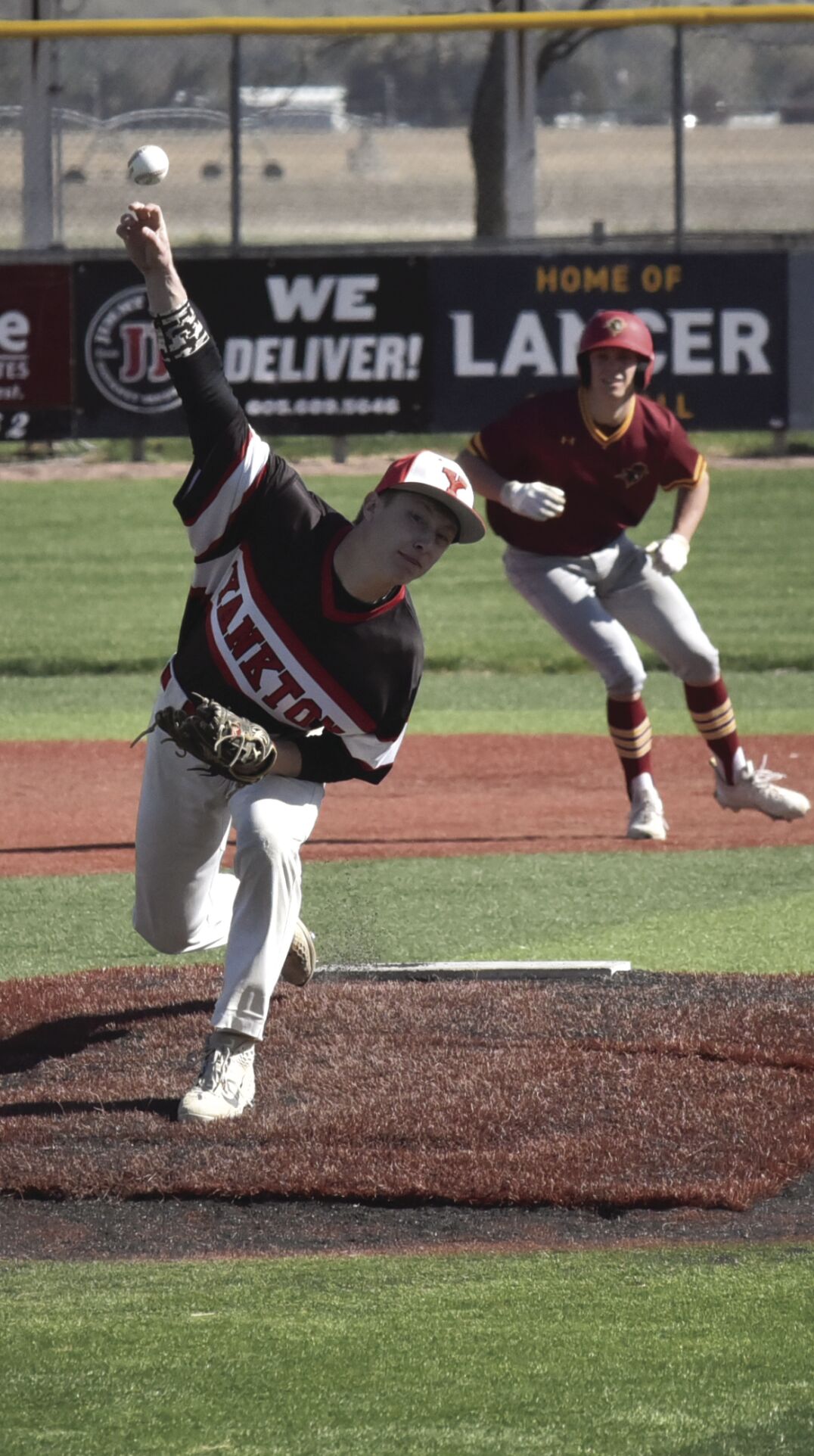 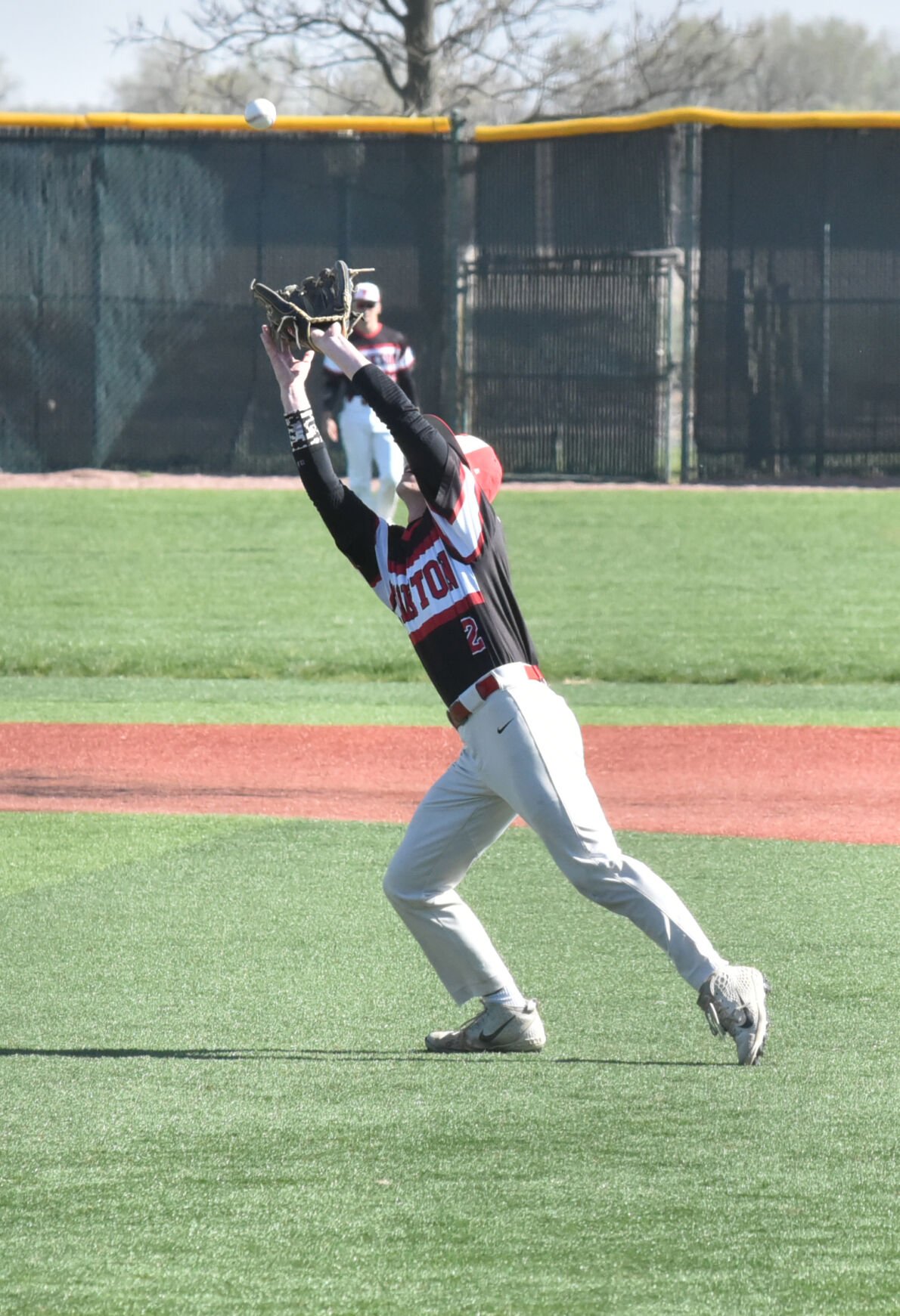 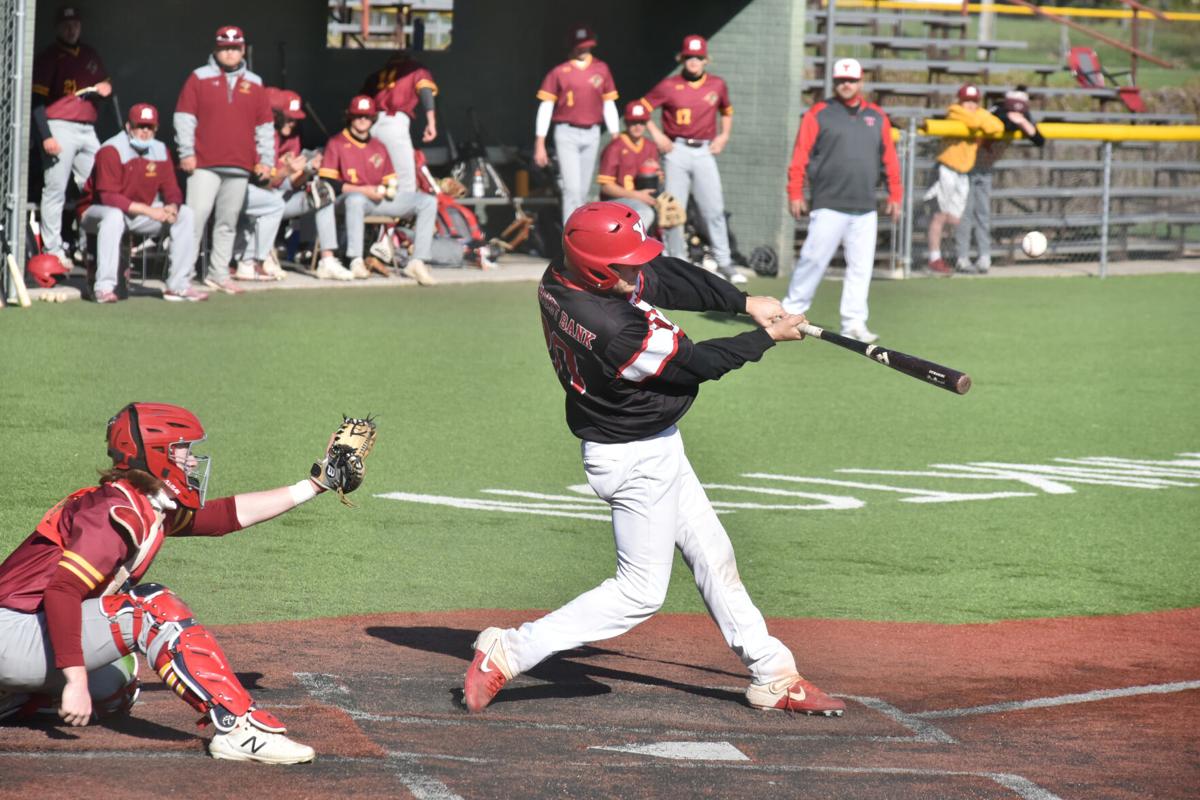 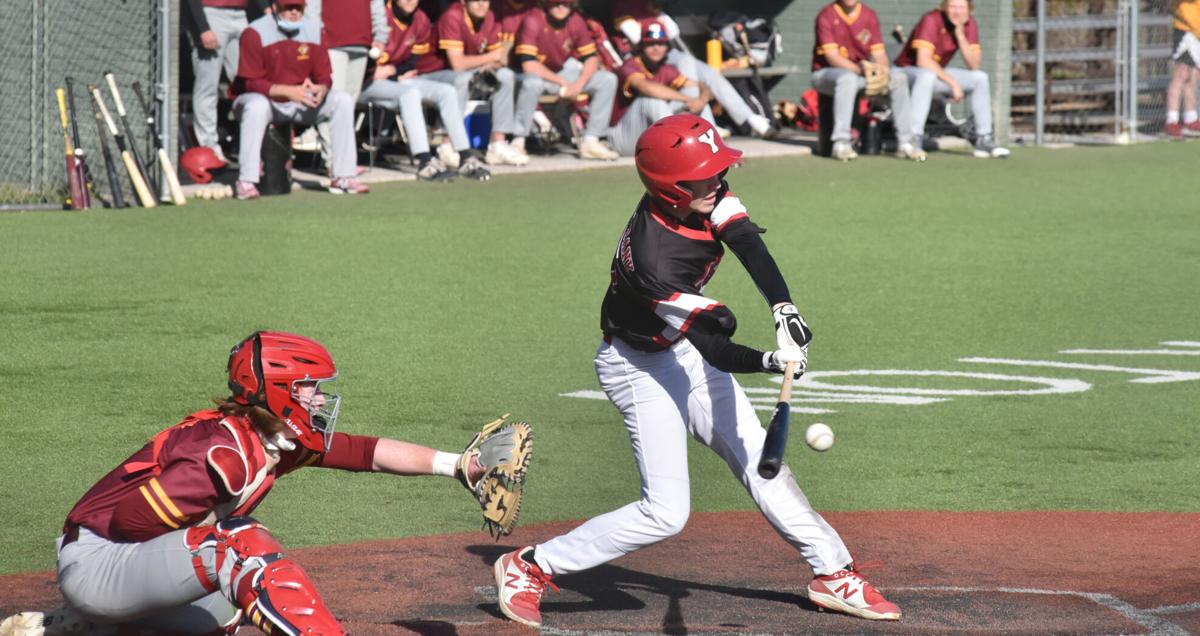 Yankton's Jacob Larson hits a pitch off the end of the bat during Monday's doubleheader against SIoux Falls Roosevelt at Riverside Field at Bob Tereshinski Stadium.

The Buck offense struggled to get rolling and Sioux Falls Roosevelt came away with a double-header sweep of Yankton Monday night in high school club baseball at Riverside Field at Bob Tereshinski Stadium.

Roosevelt held Yankton to one hit in a 10-3 victory in the opener.

Dylan Ades went 3-for-4 with a double and three RBI for the Rough Riders. Jamie Legg went a 4-for-5 with two RBI.

Landon Loecker went 2-for-3 with an RBI for Yankton.

Kyler Miritello picked up the win for Roosevelt. Tristan Redman the loss for Yankton.

WAGNER — Parkston-Ethan-Tripp scored twice in the seventh to claim a 7-5 victory over Wagner in club high school baseball action on Monday.

Max Scott went 4-for-4 to lead P-E-T. Logan Heidinger and Ty Neugebuaer each had two hits. Jay Storm added a hit in the victory.

Carter Cournoyer had a double and three RBI for Wagner. Nolan Dvorak, Dustin Honomichl and Matt Link each had a hit.

Kade Bialas struck out three batters in relief for the win. Sudbeck started, striking out eight for P-E-T. Ayden Bruguier took the loss, also in relief.

BERESFORD — Vermillion used a pair of big innings to claim a 10-0 victory over Beresford in club high school baseball action on Monday.

Jack Kratz went 3-for-4 and Connor Saunders had a pair of hits for Vermillion. Willis Robertson, T.J. Tracy, Clayton Sorensen and Nick Roob each had a hit in the victory.

Kolby Schiefen, Kaleb Bickett and Alex Winquist each had a hit for Beresford.

Jake Jensen went the distance in the win, striking out four in the five-inning contest. Cody Klungseth took the loss.

Kaleb Kubal gave up five runs over one inning to take the loss for Bon Homme (4-3). Logan WInckler pitched two innings, Trey Kaul and Landon Schmidt and inning each for Bon Homme.

Bon Homme is back in action Thursday at Hanson-Aurora.

SCOTLAND — Clayton Sorensen and TJ Tracy drove in four runs each to lead Vermillion to a 16-2 five inning win over Scotland-Menno Sunday afternoon in Scotland.

The Trappers next game is Wednesday against Canton in Menno.

Cameron Zahrbock hit a triple and Tristan Redman recorded the other hit for Yankton (3-14).

Landon Loecker picked up the loss on the mound for Yankton, recording two outs and giving up 10 runs. Mac Ryken pitched the final three innings, giving up five runs.

Lincoln Kienholz recorded four hits, including a triple for Pierre. Bennett Dean scored two runs and recorded a triple. Isaak Polak gave up one run over four innings for Pierre, picking up the win.

Dylan Prouty scored the lone run for Yankton, and hit a triple in game two. Austin Wagner drove in Prouty on a single.

Bobby Koepsell had a big day at the plate, recording four hits, driving in three runs and scoring three runs of his own. Avery Feterl recorded two hits, including a double, and drove in four runs.

Hoffman struck out 14 batters and gave up one hit over six innings for the Honkers (5-1). Aiden Bultke and Myles Kott drove in two runs each.

PLDCWLCS is back in action at Gregory Thursday.