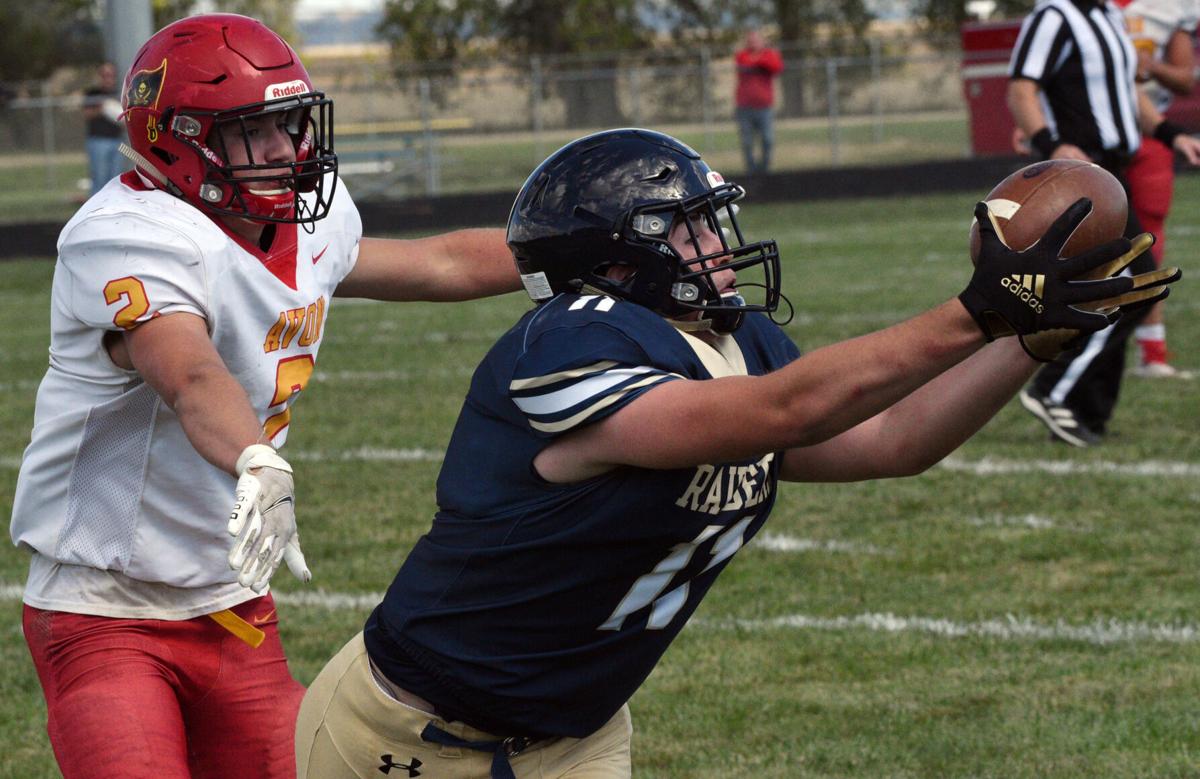 Gayville-Volin's Spencer Karstens, 11, stretches to catch a pass against the defense of Avon's Lincoln Thury during their football game on Friday in Gayville. 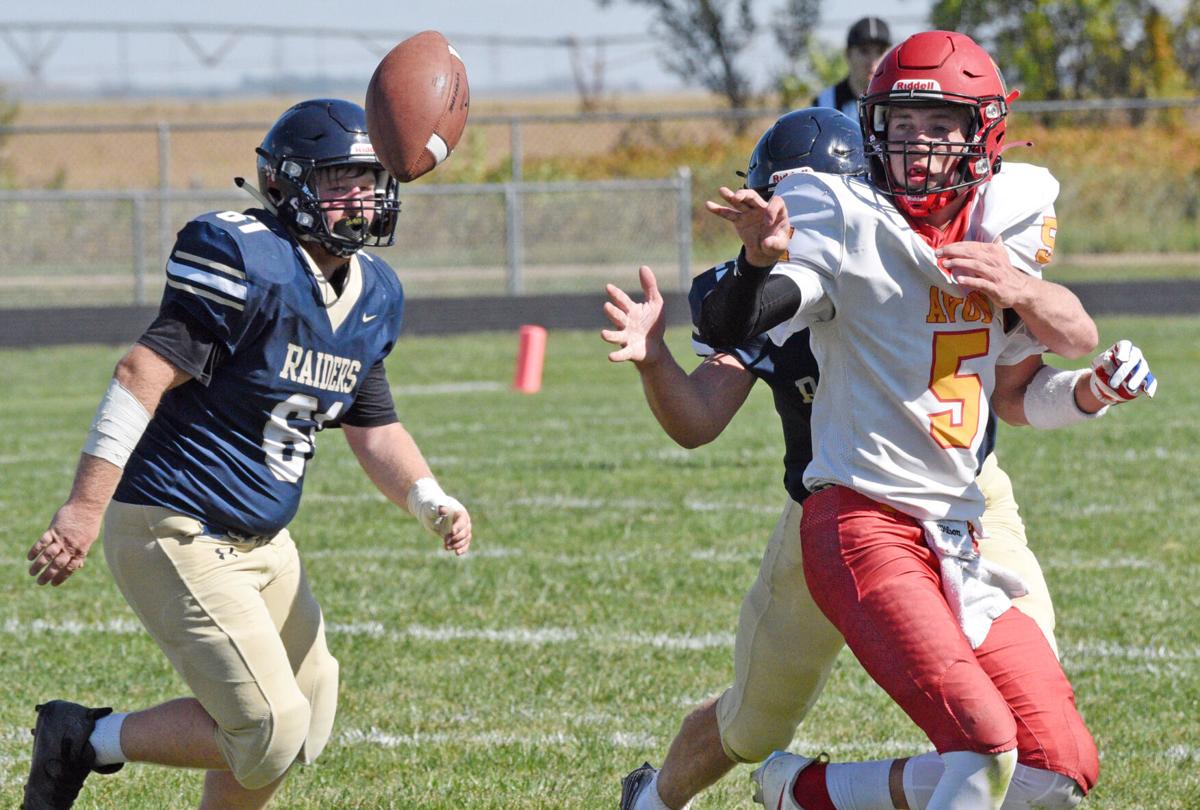 Avon quarterback Riley Rucktaeschel, 5, pitches the ball to a teammate as he is hit by a Gayville-Volin defender during their football game on Friday in Gayville. 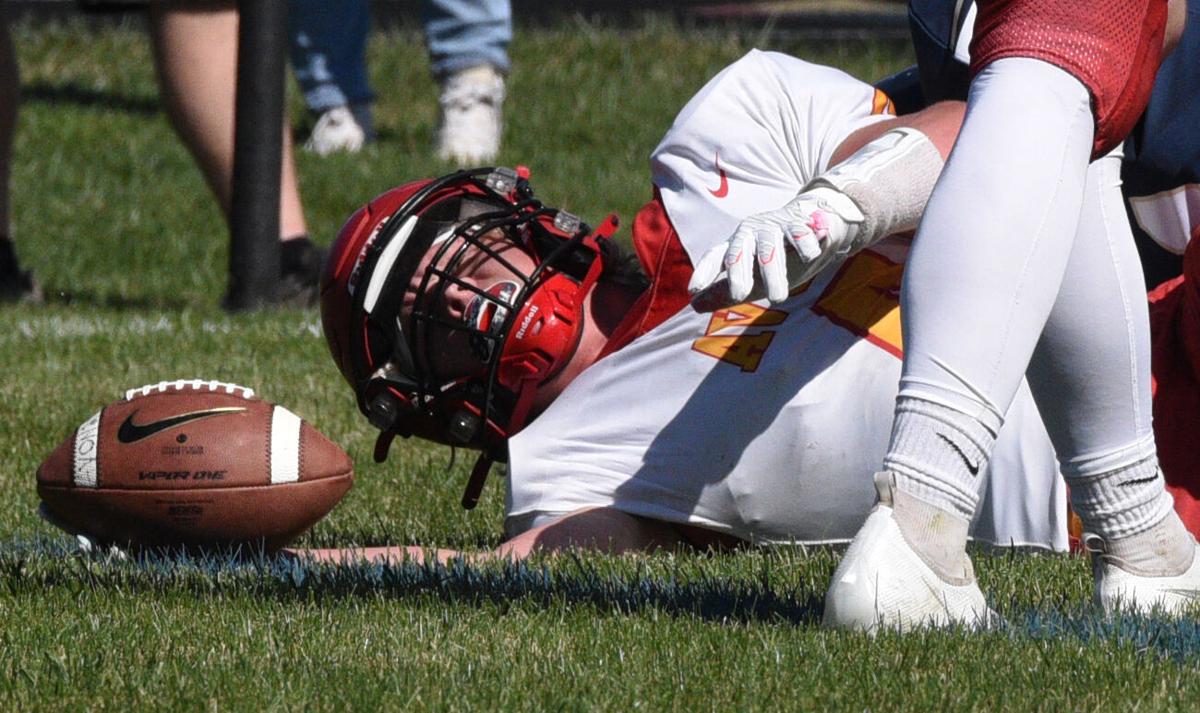 Avon's Landon Mudder looks up after crossing the goal line for a touchdown during the Pirates' football game against Gayville-Volin on Friday in Gayville.

Gayville-Volin's Spencer Karstens, 11, stretches to catch a pass against the defense of Avon's Lincoln Thury during their football game on Friday in Gayville.

Avon quarterback Riley Rucktaeschel, 5, pitches the ball to a teammate as he is hit by a Gayville-Volin defender during their football game on Friday in Gayville.

Avon's Landon Mudder looks up after crossing the goal line for a touchdown during the Pirates' football game against Gayville-Volin on Friday in Gayville.

GAYVILLE — Avon scored twice in the fourth quarter, rallying from a 10-point deficit to claim a 36-32 victory over Gayville-Volin in a battle of ranked Class 9B football teams on Friday afternoon.

Andrew Gustad rushed for 153 yards and two scores, and caught a 49-yard touchdown pass on the final play of the first half for Gayville-Volin. Nate Quatier padded for 133 yards and a score, and rushed for two touchdowns. Kyle Hirsch had four catches for 68 yards in the effort.

Gustad made 15 tackles and Ben Rumsey had 14 stops for the Gayville-Volin defense.

CORSICA — Alcester-Hudson running back Jovey Christensen followed up his record-setting performance by rushing for 248 yards and five touchdowns as the Cubs clubbed Corsica-Stickney 42-20 in prep football action on Friday.

A week earlier, Christensen rushed for a state 9-man record 547 yards and tied a 9-man record with nine touchdowns in a 70-54 victory over Centerville.

Caden Vandrongelen rushed for 91 yards for Corsica-Stickney. Tyson Wentland passed for 109 yards, Shad Bosma passed for a score and Carter Wright scored twice for the Jaguars.

Winquist had a hand in 14 tackles for Alcester-Hudson. Jason Wennblom was in in 12 tackles. Christensen picked off a pass for the Cubs.

Vandrongelen and Lucas Krogstad each had 10 stops for Corsica-Stickney.

Alcester-Hudson, 2-3, hosts Burke next. Corsica-Stickney travels to Burke on Oct. 7.

TYNDALL — Parkston built a 32-0 halftime lead on the way to a 46-7 victory over Bon Homme in prep football action on Friday.

Riley Rothschadl passed for 95 yards and a score for Bon Homme. Isaac Crownover had a touchdown catch, as well as a team-best 46 yards rushing.

Chapin Cooper led the Bon Homme defense with eight tackles. Wesley Kaul had seven stops and Crownover made six tackles for the Cavaliers.

Evan Schmitt rushed for 73 yards and two scores, and was 6-for-9 passing for 57 yards for LCC. Caleb Erwin added a touchdown run in the victory.

Riley Sudbeck passed for 75 yards and rushed for 49 yards for Hartington-Newcastle. Lane Heimes rushed for a team-best 61 yards. Kale Korth and Carson Sudbeck each had a rushing touchdown for the Wildcats.

Haisch had a hand in nine tackles for LCC. Grant Erwin picked off a pass. Lucas Rasmussen recorded three tackles for loss in the victory.

Heimes was in on 14 tackles and Korth had a hand in 13 stops for Hartington-Newcastle. Daniel Steffen recovered a fumble.

HARTINGTON, Neb. — Hartington Cedar Catholic scored 55 first-half points on the way to a 69-0 rout of Bancroft-Rosalie-Lyons-Decatur in prep football action on Friday.

Kleinschmit also had a punt return for touchdown.

Carson Arens and Hunter Thoene each had a hand in five tackles. Spencer Albers, Tate Thoene and Brandon Rohan each picked off a pass.

Gus Gomez had five tackles for the BRLD defense.

Cedar Catholic, 4-1, travels to Crofton next. BRLD hosts Ponca next.

Kratz scored on a 25-yard run and threw a 35-yard score to Zoan Robinson for Vermillion (3-2). Ty Hertz added an 11-yard rushing score in the fourth quarter.

Vermillion is at Dell Rapids Friday at 7 p.m. Lennox is at Sioux Falls Christian Friday night.

MILLER — Miller-Highmore-Harrold built a 22-6 lead in the first quarter and held on for a 48-36 victory over Jim River in prep football action on Friday.

Tate Hoffman rushed for 365 yards and six touchdowns for MHH.

Dawson Bietz passed for 261 yards and three scores for Jim River. Auston Philsbury caught three passes for 100 yards and a score. Ajay Herrboldt and Logan Sayler each had touchdown catches, and Dylan Nicholson had a touchdown run for the Trappers.

Herrboldt had an interception for the Trappers defense.

Jim River, 2-3, hosts Mount Vernon-Plankinton on Oct. 1 in Scotland. The game will mark the Scotland homecoming for the Trappers.

Vinsion was 8-for-9 passing for 123 yards and two scores. He also ran the ball nine times for 127 yards and three scores. Bryan Solorzano added a rushing touchdown in the victory.

Ryan Schmit picked off a pass for Osmond.

Dominic Wilcox and Isaiah Salmon each had an interception for Randolph. Bryson Eledge had a team-best 16 tackles, with Beal making 12 stops.

Osmond, 4-1, hosts Wausa next. Randolph travels to Winside on Thursday.

Christopherson picked off a pass and had a team-best 13 tackles for the Sioux Valley defense. Dawson Doyscher and Joe Hornick each had eight stops for the Cossacks.

For Parker, Charlie Patten had 10 tackles, including two for loss, and an interception.

Canistota-Freeman hosts Irene-Wakonda at 3 p.m. in Freeman Friday. Chester Area is at home against Hanson Friday.

Select photos from the Avon at Gayville-Volin football game, Sept. 24, 2021.