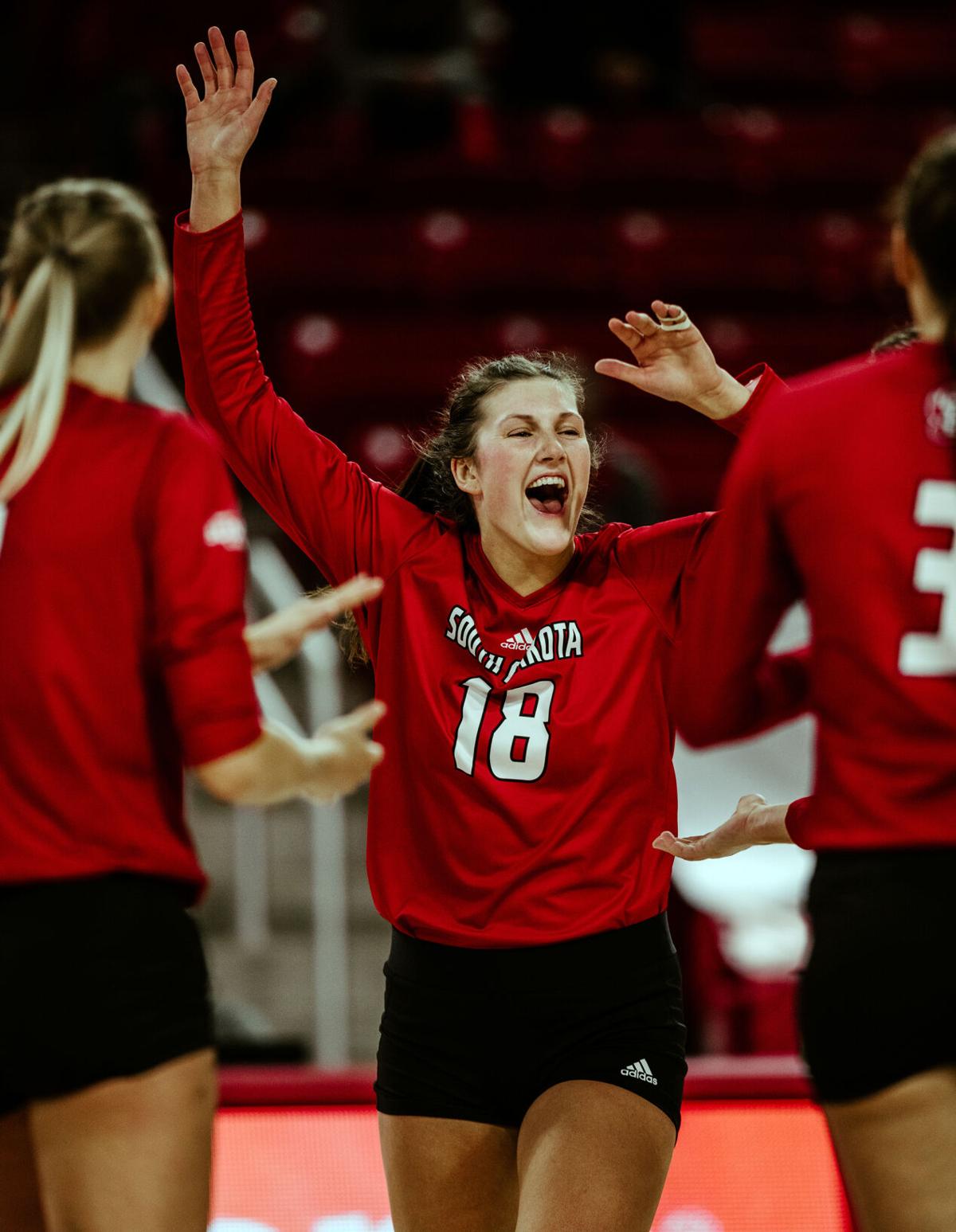 South Dakota's Maddie Wiedenfeld, 18, celebrates with her teammates during the Coyotes' Summit League volleyball victory over North Dakota State on Monday at the Sanford Coyote Sports Center. The transfer from New Hampshire had 13 kills, her best as a Coyote, in the sweep. 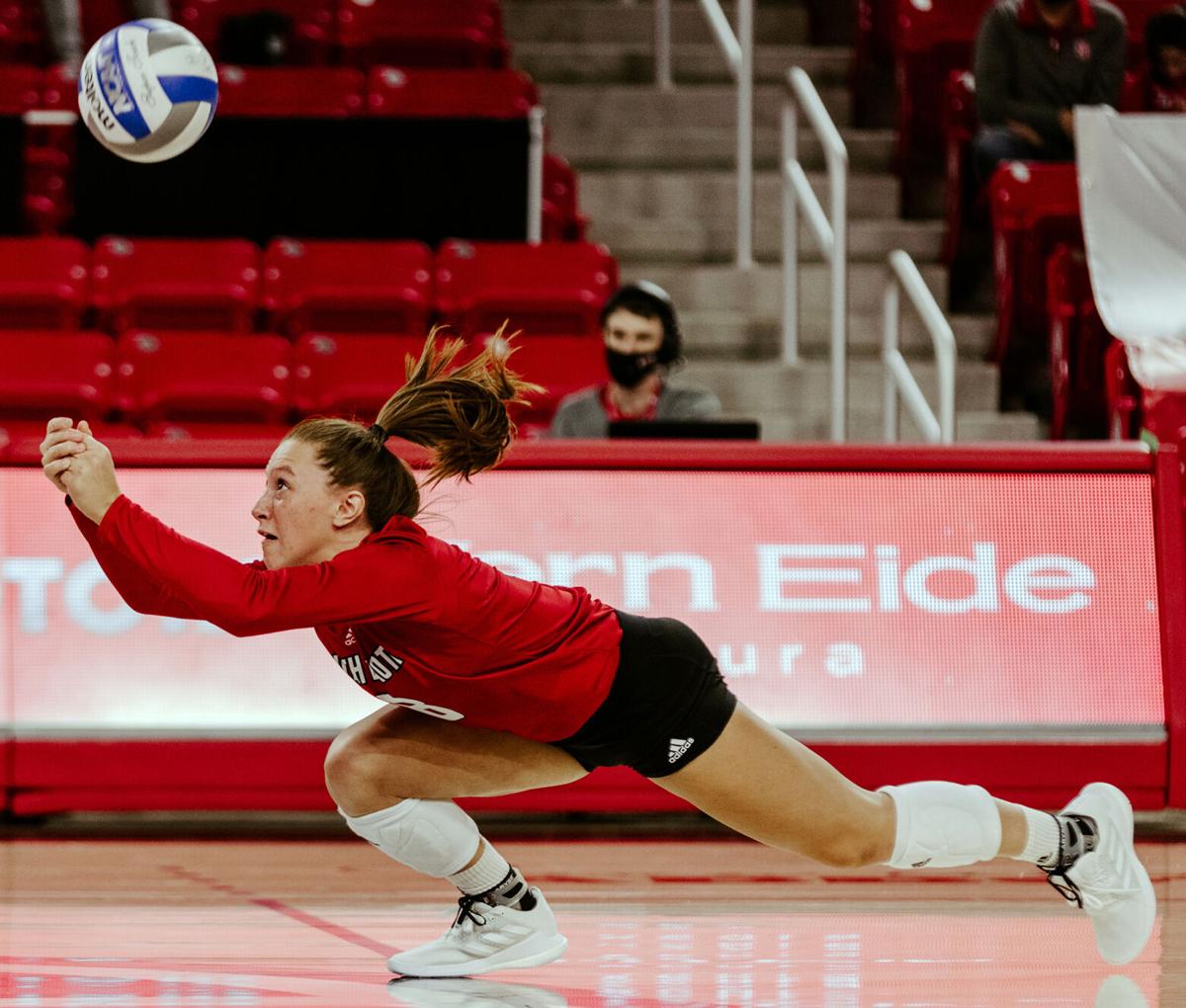 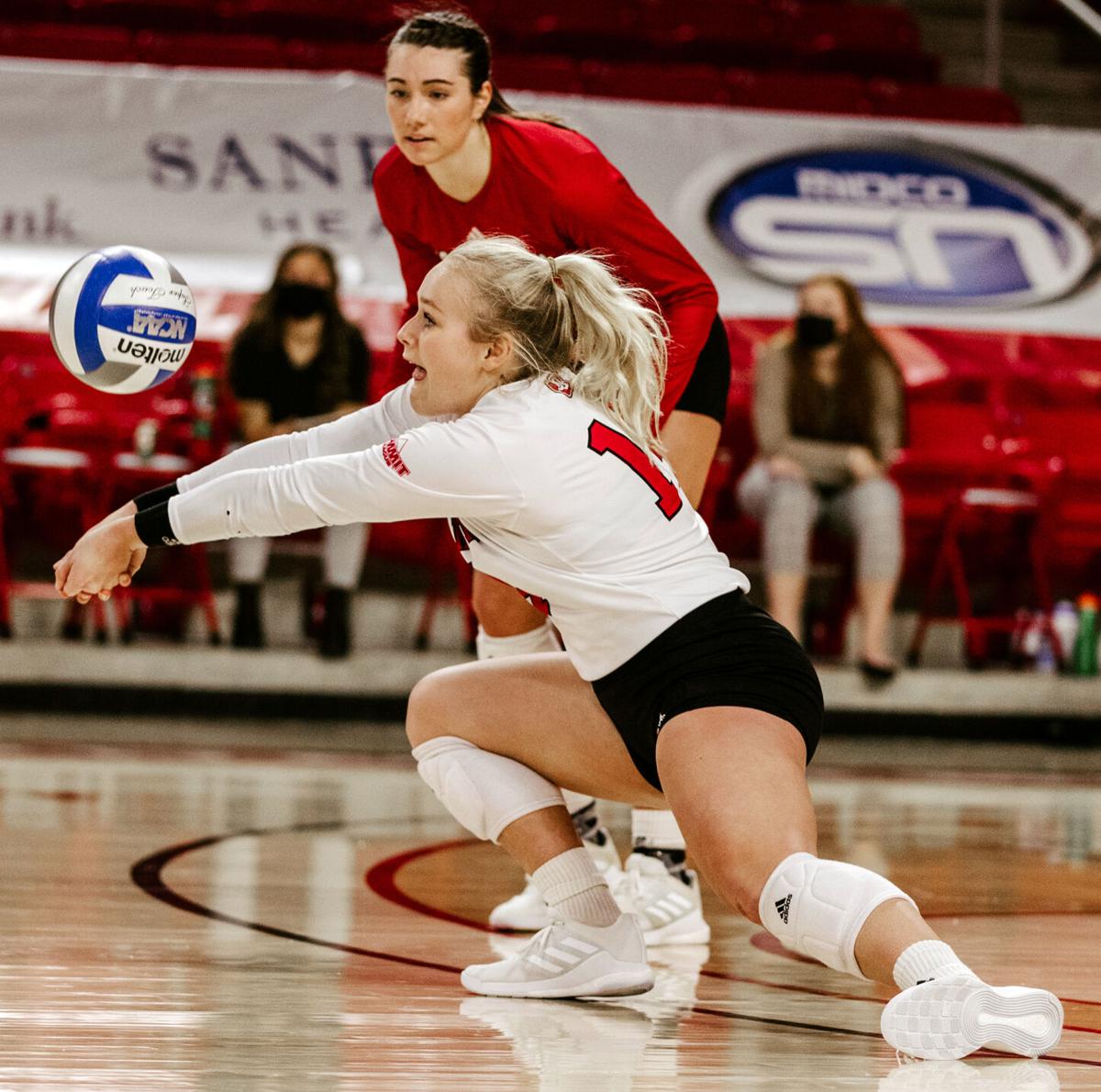 South Dakota's Maddie Wiedenfeld, 18, celebrates with her teammates during the Coyotes' Summit League volleyball victory over North Dakota State on Monday at the Sanford Coyote Sports Center. The transfer from New Hampshire had 13 kills, her best as a Coyote, in the sweep.

Don’t look now, but the preseason favorite and the first-place team in the Summit League volleyball standings showcased another offensive weapon.

Wiedenfeld, in her second season with the South Dakota volleyball program, was nearly perfect with 13 kills (only two errors) on 21 swings in the Coyotes’ 25-14, 25-16, 25-23 sweep of North Dakota State on Monday night at the Sanford Coyote Sports Center.

In the process, Wiedenfeld’s 13 kills were her most in a Coyote jersey — she spent the 2018 season at New Hampshire before transferring to USD.

“And obviously getting that in three sets is pretty impressive,” head coach Leanne Williamson said, “and hitting over .500, it speaks for itself there.”

While the Coyotes (6-4, 5-1) certainly found a matchup they liked, Wiedenfeld credited her continued alliance with setter Madison Jurgens as one of the reasons why she was particularly effective this weekend — USD won both matches against the Bison.

“I definitely think Jurgs’ and my connection has gotten a lot better this weekend and has gotten more consistent,” Wiedenfeld said, “and I think that played a huge role.”

It also presents an even tougher challenge for opposing defenses.

“It’s interesting, because so many teams when they prepare for us, prepare for Sami and Elizabeth,” Williamson said, “and they set up their blocking scheme; their defensive scheme to defend them at a high level.”

Production like Wiedenfeld provided the Coyotes on Monday only makes USD a more formidable offensive scout for opposing defenses.

“We’ve talked a lot about it this season, we’re offensively a threat everywhere across the net,” Juhnke said. “So I think it’s hard for teams to have just one game plan against us.”

Based on USD’s success during the 2019 season, there weren’t going to be many question marks on its side of the net for this season, according to Williamson.

“We’ve been saying that since we reported for preseason, I don’t think offense is our issue,” she said. “Offensively, we’ve got a lot of really good people. We have so much depth within the offensive side of the ball, and that does bode well for us.”

South Dakota then closed strong in the second set and then survived a tighter third set to record the sweep. For the match, USD hit .257, but Williamson pointed to one specific area that enabled the Coyotes to set up the offense. Last weekend, for example, USD struggled receiving serves to get into its offense, but Monday, North Dakota State only recorded two ace serves.

“We’ve struggled in some matches getting ourselves into those situations,” Williamson said. “We were in system much more often.”

Following a series split with Omaha the previous weekend, South Dakota was able to improve enough to be able to win both matches against the Bison and keep itself in first place in the Summit League standings.

“This weekend mentally has made us improve as a team,” Wiedenfeld said. “We learned so much in how to win together, pick each other up, and we stayed consistent the entire time.”

Up next for the Coyotes is a series next Sunday and Monday against South Dakota State in Brookings.