The South Dakota volleyball team poses with the championship banner and trophy after winning the Summit League Volleyball Tournament with a 3-2 victory over Denver in the final on Saturday at the Sanford Pentagon in Sioux Falls. 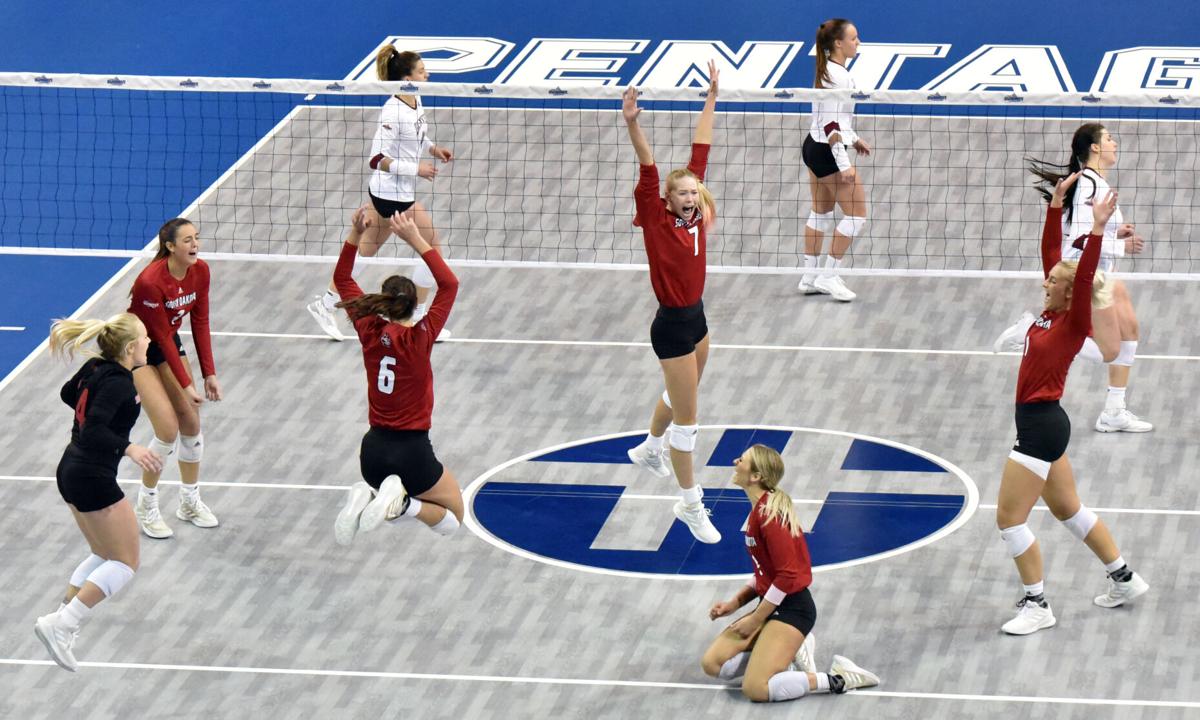 South Dakota players celebrate championship point of their 3-2 victory over Denver in the final of the Summit League Volleyball Tournament, Saturday at the Sanford Pentagon in Sioux Falls. 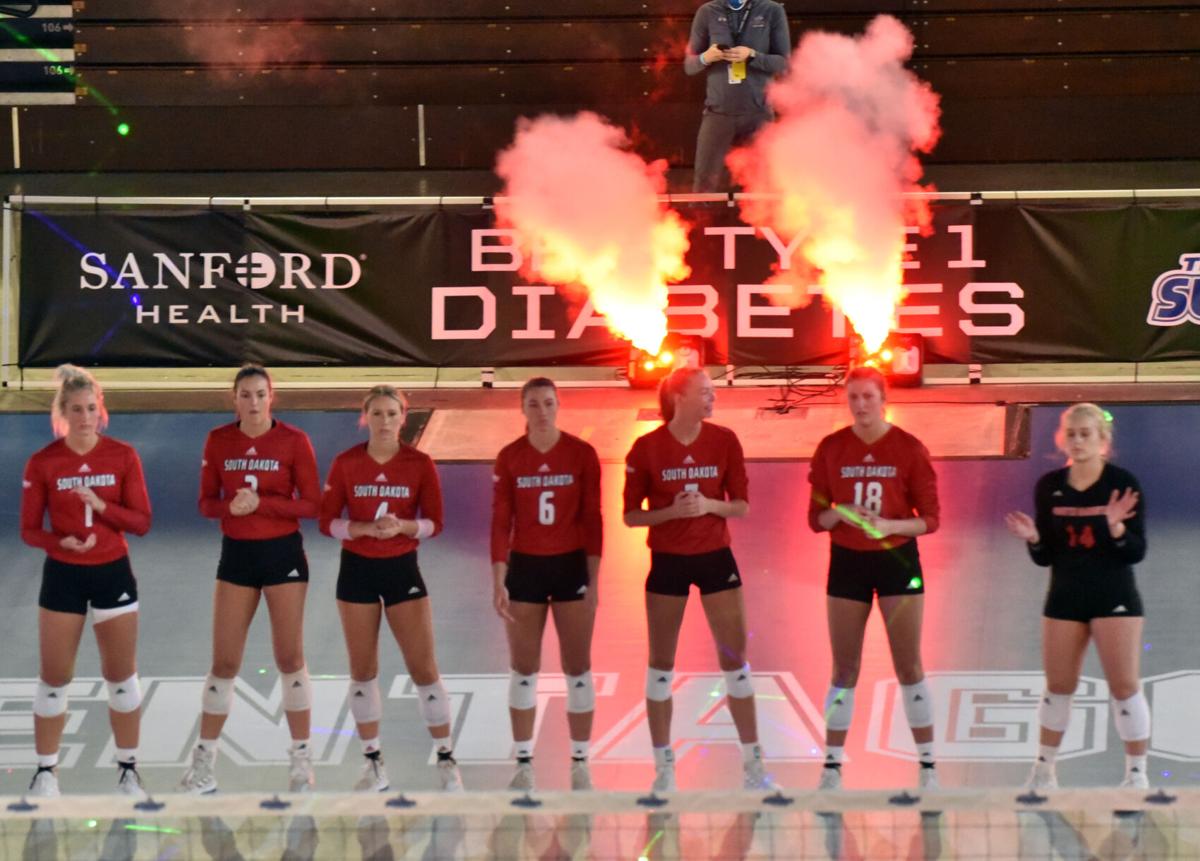 South Dakota players stand together during the introduction of starting lineups prior to the championship match of the Summit League Volleyball Tournament, Saturday at the Sanford Pentagon in Sioux Falls.

The South Dakota volleyball team poses with the championship banner and trophy after winning the Summit League Volleyball Tournament with a 3-2 victory over Denver in the final on Saturday at the Sanford Pentagon in Sioux Falls.

South Dakota players celebrate championship point of their 3-2 victory over Denver in the final of the Summit League Volleyball Tournament, Saturday at the Sanford Pentagon in Sioux Falls.

South Dakota players stand together during the introduction of starting lineups prior to the championship match of the Summit League Volleyball Tournament, Saturday at the Sanford Pentagon in Sioux Falls.

USD’s attack struggled to get the ball rolling in the opening set, tallying nine kills on 30 attacks. Denver picked up 17 kills in the set to win it 25-19. The second set started to look like Denver was going to run away, until freshman Laura Petterson stepped up to serve with the Coyotes trailing 22-18.

Petterson entered the match for the first time, and picked up two aces and buoyed a 7-0 run to give USD a 23-22 lead in set two. The Coyotes got set point at 24-23, but were unable to finish the set off and Denver took a 2-0 lead in the match.

“We needed a spark at that moment and we felt like she’s one that can go on runs,” head coach Leanne Williamson said. “She’s been kind of off and on for us this year, but you could see right away I don’t think she really had time to think about it, which is probably a good thing. She just went off, had a couple really good serves… and got them (Denver) out of system.”

From there the Coyotes used the momentum of the run at the end of the second set to take set three 27-25. Senior Sami Slaughter hammered home the final point of the third set and the Coyotes were still alive.

The Coyotes stayed one step behind Denver for most of the fourth set, but used a late run to put themselves in position to force a fifth set. With Denver leading 21-17, the Coyotes went on a 7-1 run to take a 24-22 advantage. After three set points, USD finally prevailed 26-24 and forced a winner-take-all fifth set.

Denver jumped out to a 4-0 lead in the fifth, including back-to-back aces to force a USD timeout. After slowly chipping away at the lead, the Coyotes tied things up for the first time in the set at eight. From there Denver and USD exchanged points, with the Coyotes tying the set four more times and Denver regaining the one-point advantage each time.

USD took it’s first lead of set five at 13-12, and a Juhnke kill gave USD the first match point at 14-12. The following play, a Pioneer attack sails out-of-bounds, giving the Coyotes what was initially the match point. Denver immediately challenged the ruling, and it was overturned, giving the Pioneers the point and the serve trailing 14-13.

“We all knew there was a touch, so that’s kind of the joy of having the information that we do,” Williamson said. “We were able to use that time to regroup and actually talk about what we wanted to do on that next play.”

Denver flipped things around on the Coyotes from there, scoring two more points to get a match point at 15-14. The Coyotes had their backs against the wall again. The two sides exchanged points with Denver taking a one point lead and match point twice more.

Trailing 17-16, the Coyotes found a way to tie things up at 17. An Elizabeth Juhnke kill gave USD their third match point, and Slaughter took one last swing to put the match away.

Slaughter’s kill gave USD the 19-17 victory in the fifth set, and the match 3-2. Each set following the opening set needed extra points to decide the result.

“I don’t even think I could say enough to say how thankful I am to be around this group of girls,” Juhnke said. “We’re a very tight knit group. I don’t think I’ve ever been part of a team that’s closer. We’re all best friends and I think that really shows on the court, how excited we get for each other adn how much we love this game and the people around us.”

The Coyotes claimed their second Summit League title, and now await the announcement of their opponent today (Sunday) for the NCAA Tournament. The tournament will be played fully in Omaha, Nebraska this season.

Select photos from the championship match of the Summit League Volleyball Tournament, April 3, 2021, at the Sanford Pentagon in Sioux Falls. S…