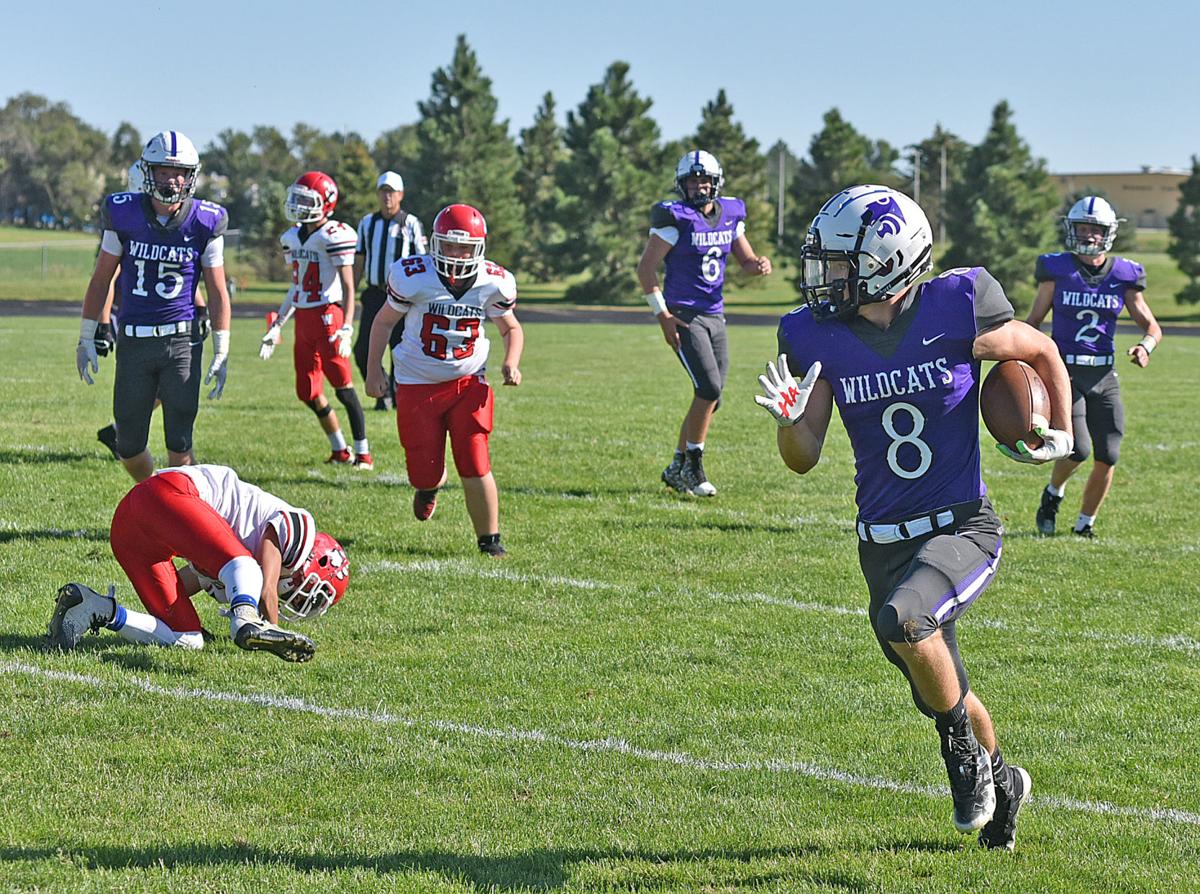 Hartington-Newcastle's Kobe Heitman, 8, has plenty of open field during a run in Friday's football game against Winside in Hartington, Nebraska. 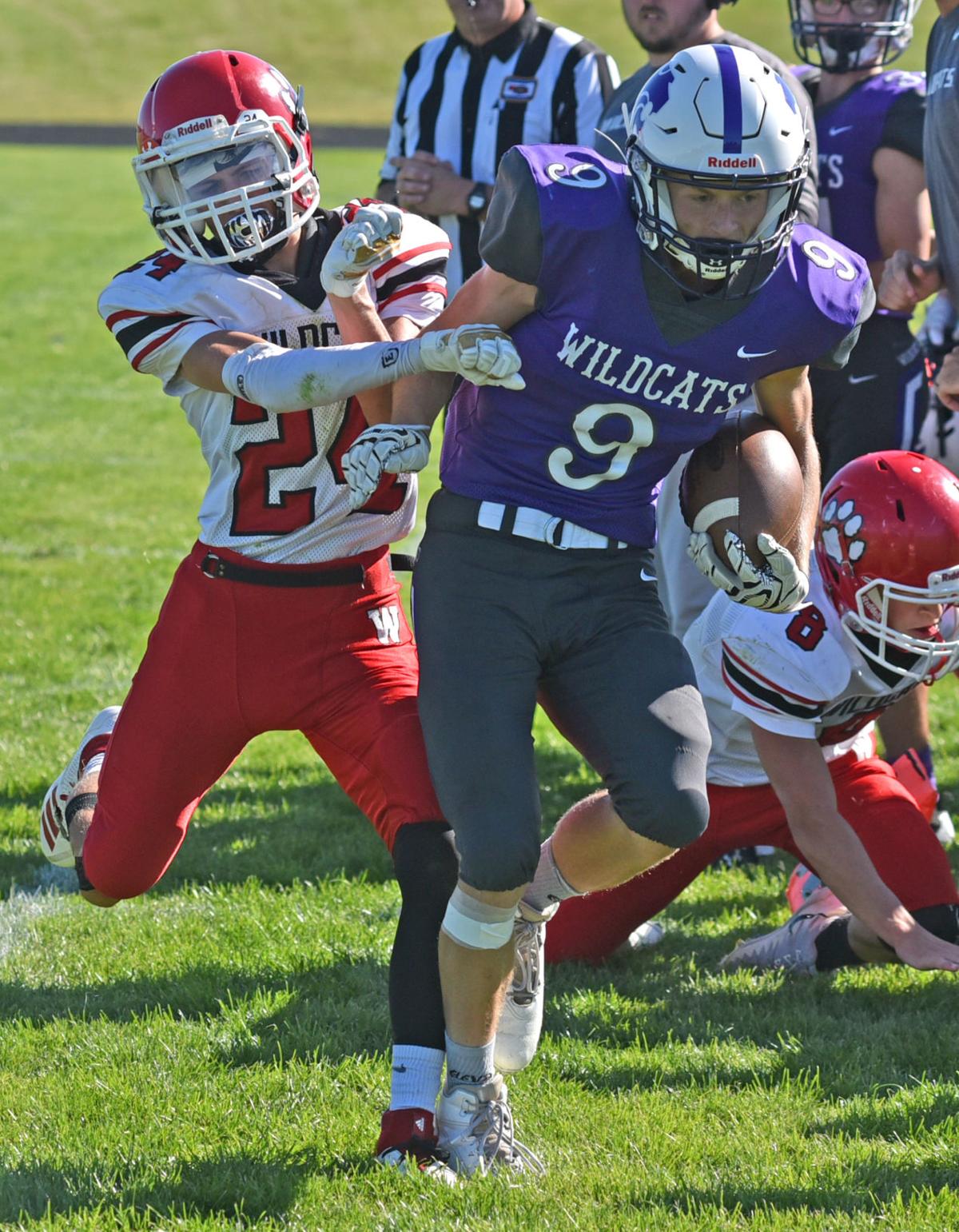 Hartington-Newcastle's Zach Burcham, 9, gets pushed out of bounds by Winside defender Cayden Ellis during Friday's football game in Hartington, Nebraska. 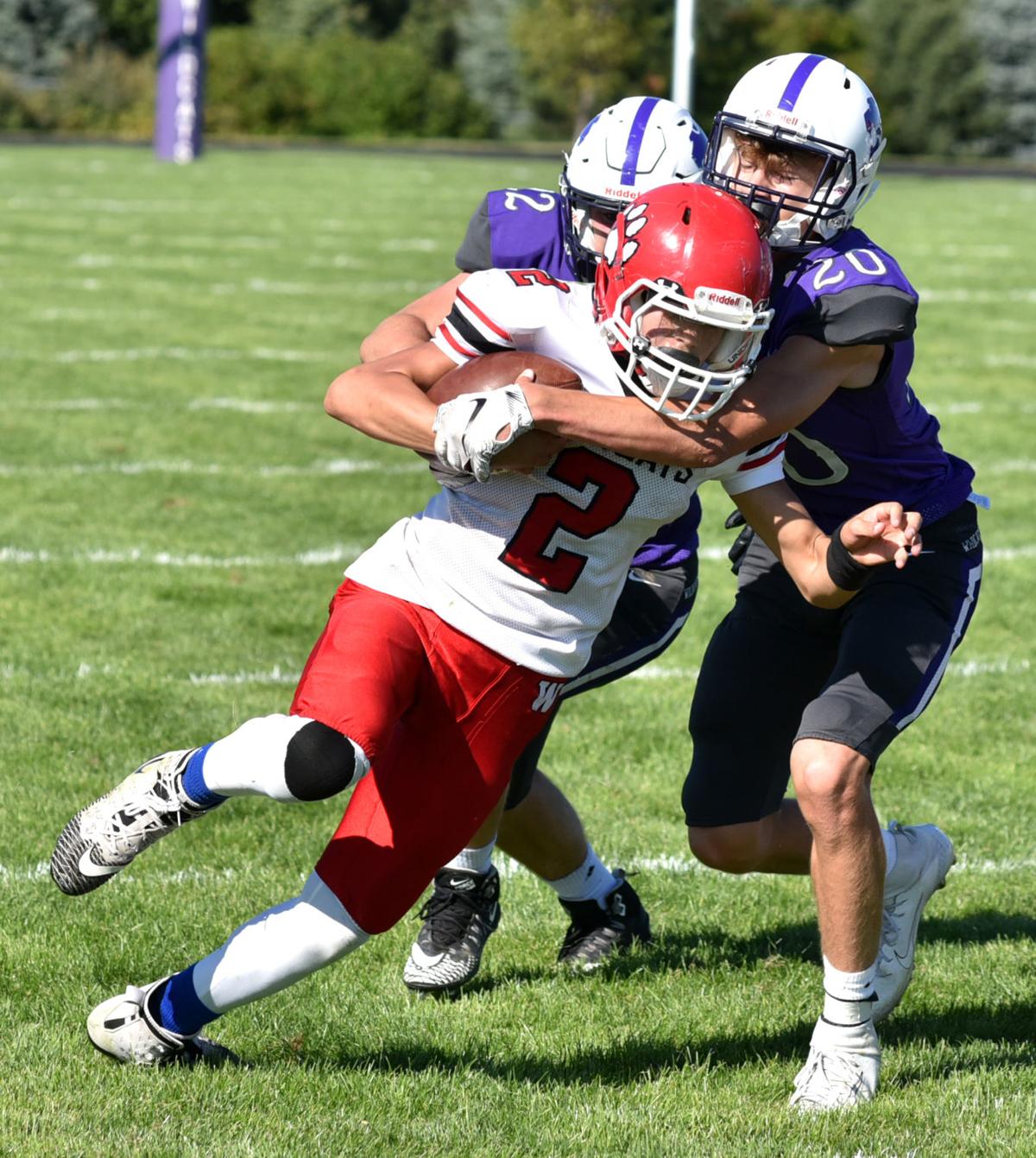 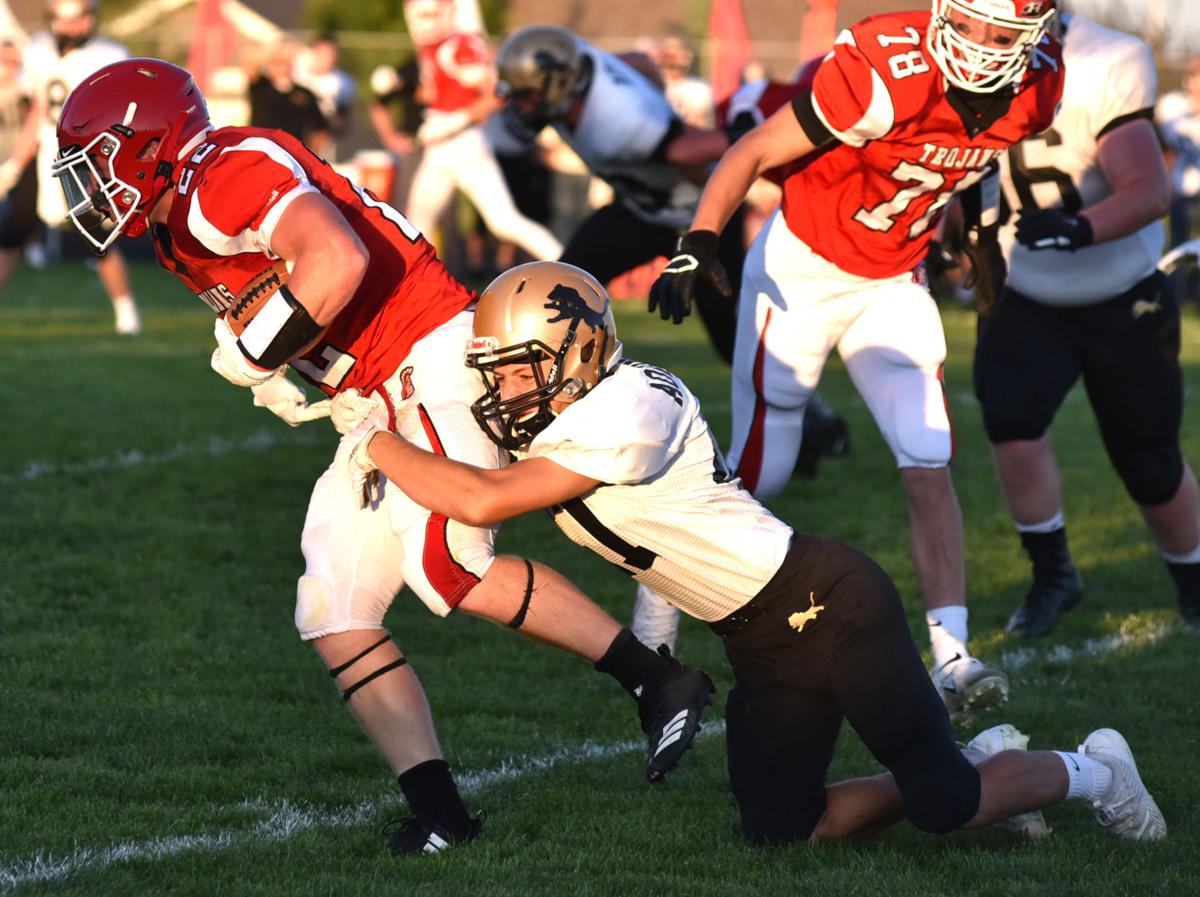 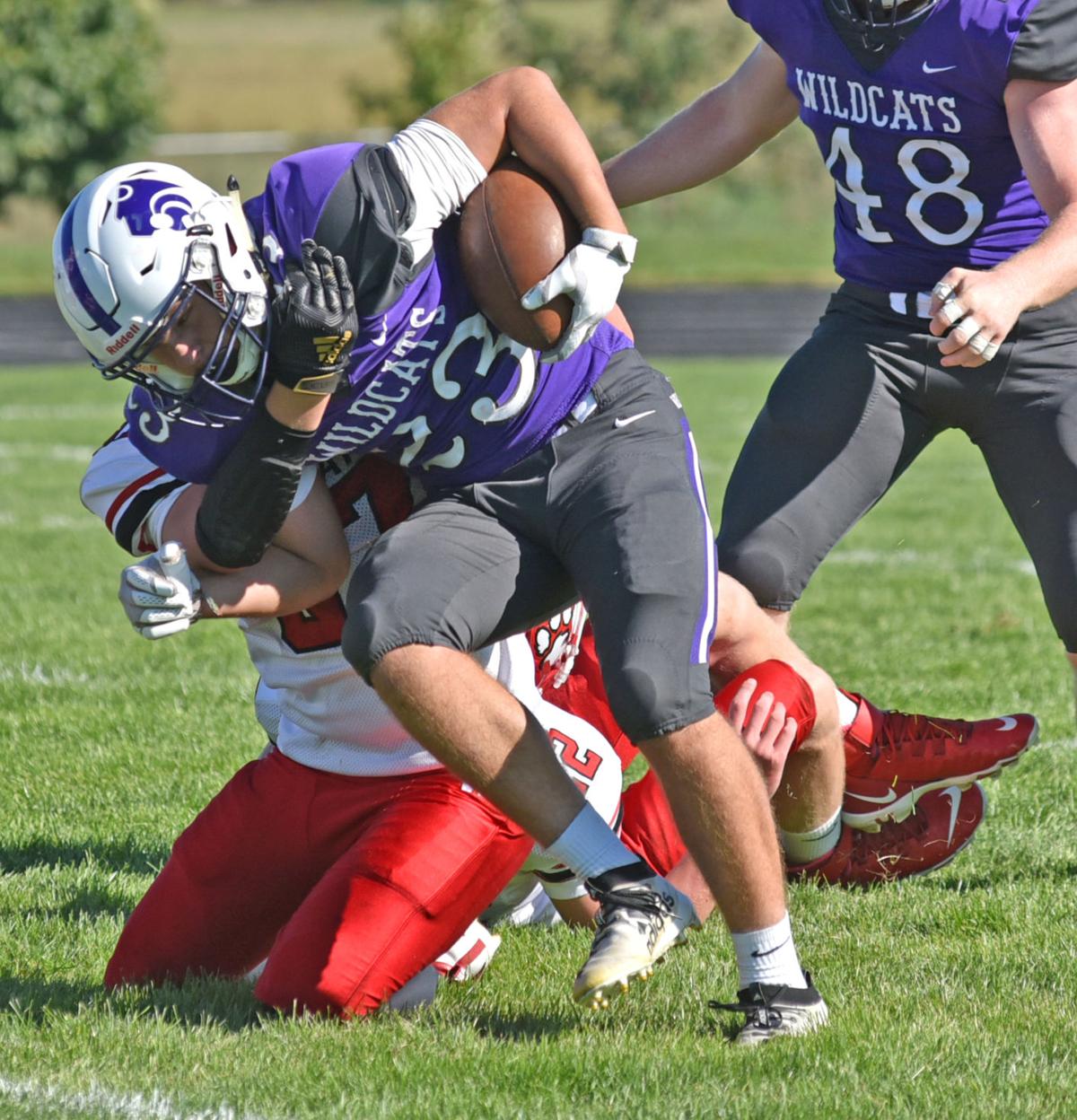 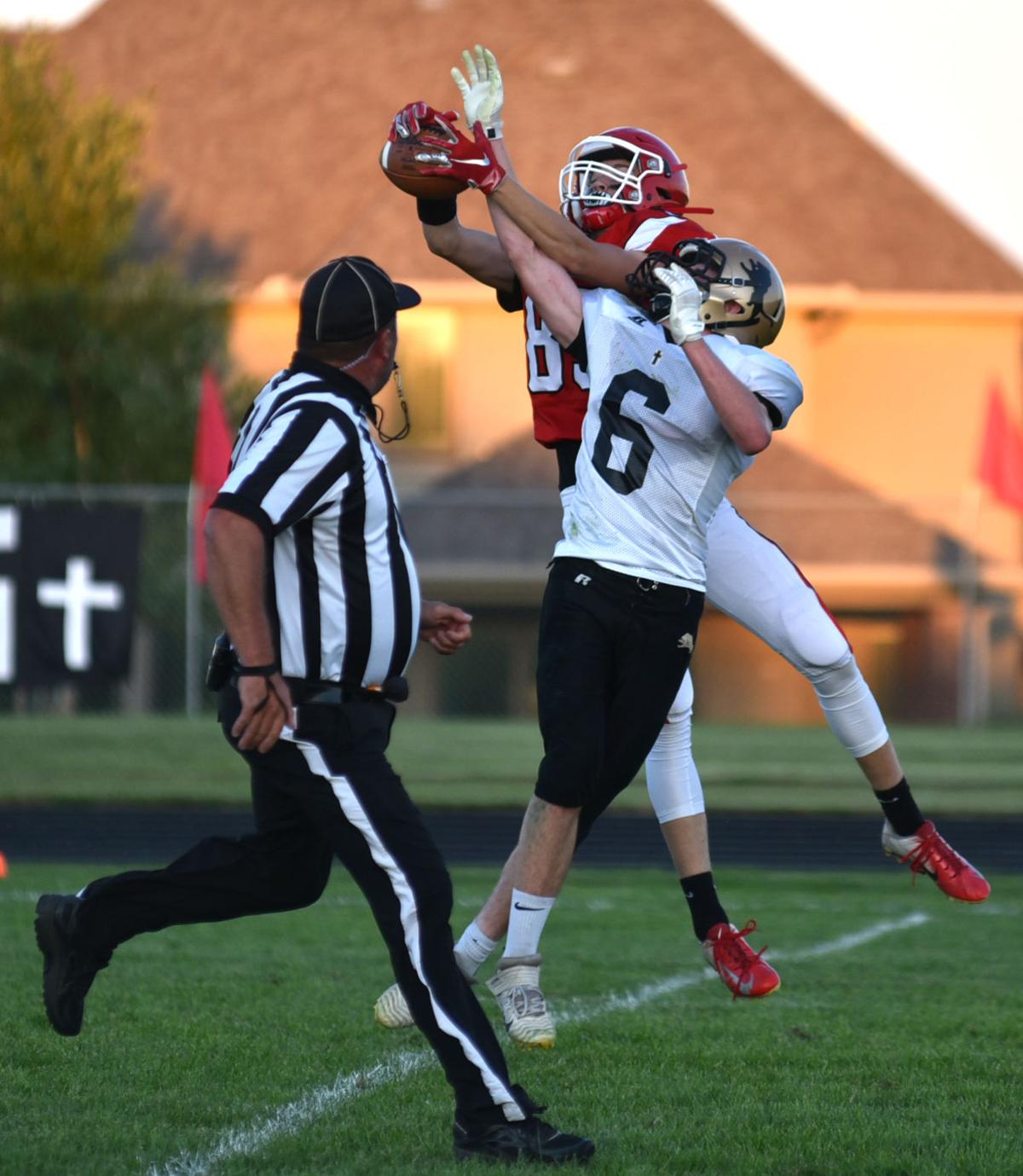 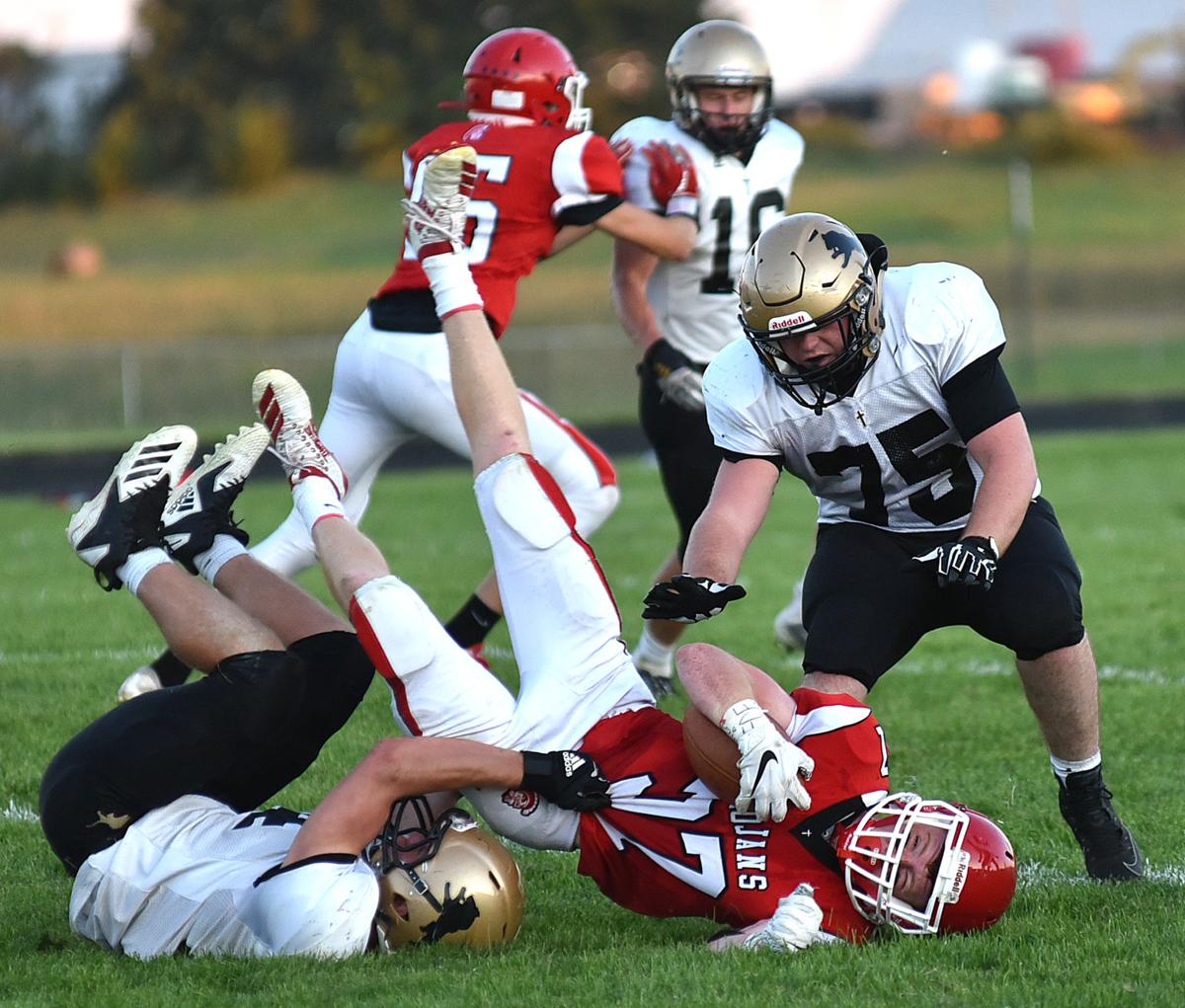 Hartington Cedar Catholic's Nathan Potts, middle, is upended by a pair of David City Aquinas defenders during a return in Friday night's game in Hartington, Nebraska. 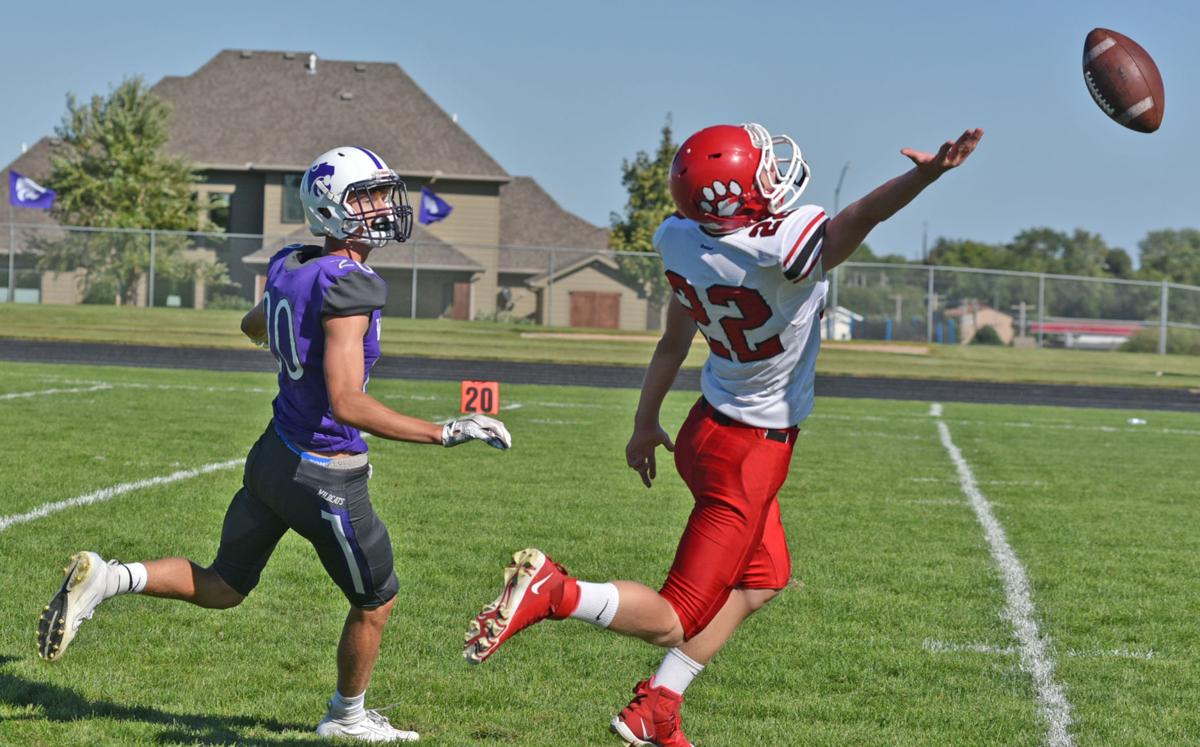 Hartington-Newcastle's Kobe Heitman, 8, has plenty of open field during a run in Friday's football game against Winside in Hartington, Nebraska.

Hartington-Newcastle's Zach Burcham, 9, gets pushed out of bounds by Winside defender Cayden Ellis during Friday's football game in Hartington, Nebraska.

Hartington Cedar Catholic's Nathan Potts, middle, is upended by a pair of David City Aquinas defenders during a return in Friday night's game in Hartington, Nebraska.

Morten threw for three touchdowns and added a fourth on the ground. He also took an interception back in the third quarter. Kobe Heitman tallied 109 yards on five carries and two scores of 46 and 48 yards respectively. Heitman also brought in one of Morten’s touchdown passes. The other two scoring throws were to Jake Peitz (14 yards) and Sam Harms (10 yards).

The offense for Winside (0-3) got on the board in the fourth with a 27-yard touchdown pass from Matthew Fredrick to Art Escalante. Fredrick converted the two-point attempt.

AVON — Hayden Ellis scampered his way to 240 yards and six touchdowns on the ground as Centerville defeated Avon 58-32 on Friday night in Avon.

SCOTLAND — Mason Dennis only passed eight times but they went for 279 yards and four touchdowns as Scotland defeated Chester Area 32-19 on Friday night in Scotland.

Dennis also had a 2-yard touchdown run for Scotland (2-2), which led 20-6 after three quarters. Ty Mogck rushed for 43 yards and Turner Nicholson added 35 yards on the ground, and Nick Harrington caught three passes for 135 yards and two scores.

Chester Area quarterback Stratton Eppard completed 7-of-17 passes for 102 yards and a touchdown, and also ran for 92 yards and a score.

HOWARD — Bailey Sage scored a pair of touchdowns to lead Canistota-Freeman to a 22-0 victory over Howard on Friday night.

Bailey Sage ran for 62 yards and plunged for a pair of one-yard touchdowns to lead Canistota-Freeman (4-0). Tyce Ortman added 136 yards and a score. Trey Ortman threw for 117 yards, and Sage lead the receiving core with 51 yards.

Up next, Howard hosts Chester Area. Canistota-Freeman will host Irene-Wakonda. Both games will take place next Friday, Sept 20.

Bloomfield is off until a Sept. 27 road game in Allen.

ALCESTER– In a Class 9B Region 2 battle of undefeated teams, the Dell Rapids St. Mary Cardinals defeated the Alcester-Hudson Cubs 64-22 in Alcester on Friday night.

St. Mary used a 36-point second quarter to go up 52-14 at halftime, before cruising to the 64-22 victory. The Cardinals finished the game with 489 total yards of offense, including 364 rushing yards. Connor Libis led the way, having three carries for 53 yards, and two rushing touchdowns. Libis also was 5-8 in the air with 125 yards, and three touchdown pass.

Payton Park was the leading rusher for the Cardinals with 10 carries for 84 yards, and a 42-yard touchdown in the first quarter. Eli Longville would also rush for 53 yards on 5 attempts and two touchdowns for St. Mary.

The Cubs were led by Logan Serck, who threw for 139 yards and two touchdowns on 8-12 passing. Alcester-Hudson will play next week at home against Gayville-Volin. Dell Rapids St. Mary will continue their undefeated season next week, as they will face the Avon Pirates in Dell Rapids.

No stats were reported for Tri-Valley.

Kaden Krause threw for 118 yards and Kellen Hoeke threw a 21-yard touchdown to Will Cummins for Milbank (1-3). Cummins finished with 40 yards and Michael Karges 54. Brodie Holtquist ran for 50 yards and Bennett Schwenn added a nine-yard score.

MILLER — Cade Faulkner threw for 151 yards and two scores, and rushed for a score in 42-6 victory for the Tripp-Delmont-Armour-Andes Central-Dakota Christian Thunderhawks over Sunshine Bible Academy in prep football action on Friday.

Trey Sparks rushed for 56 yards and two scores for the Thunderhawks. Tyler Swanson had 99 yards receiving and a score. Logan VanPelt rushed for a score and caught a touchdown pass in the victory.

Gabe Baas had seven tackles and VanPelt had six stops for TDAACDC.

The Thunderhawks, 2-2, host Parkston in Tripp next. Sunshine Bible, 0-4, is off until hosting Corsica-Stickney on Sept. 27.

Erwin completed 9-of-17 passes for 142 yards and three scores, and also ran six times for 54 yards and two touchdowns. Cael Hartung and Evan Haisch rushed for the other two touchdowns for the Bears, who held Winnebago to 33 yards on the ground.

DELL RAPIDS — Dell Rapids prevailed in a narrow 14-13 game over third-ranked Madison Friday night, where touchdowns were a premium.

Next up for Madison is a game against Brookings on Sept 20 in Madison. Dell Rapids makes the trip to Mitchell to take on the Kernels next Friday.

TEA — Austin Lake rushed for 102 yards and the Tea Area defense pitched a shutout in a 21-0 victory over West Central on Friday night in Tea.

Joey Headrick ran for 86 yards and two scores for Tea Area (3-0), while J.T. Panning had the other touchdown.