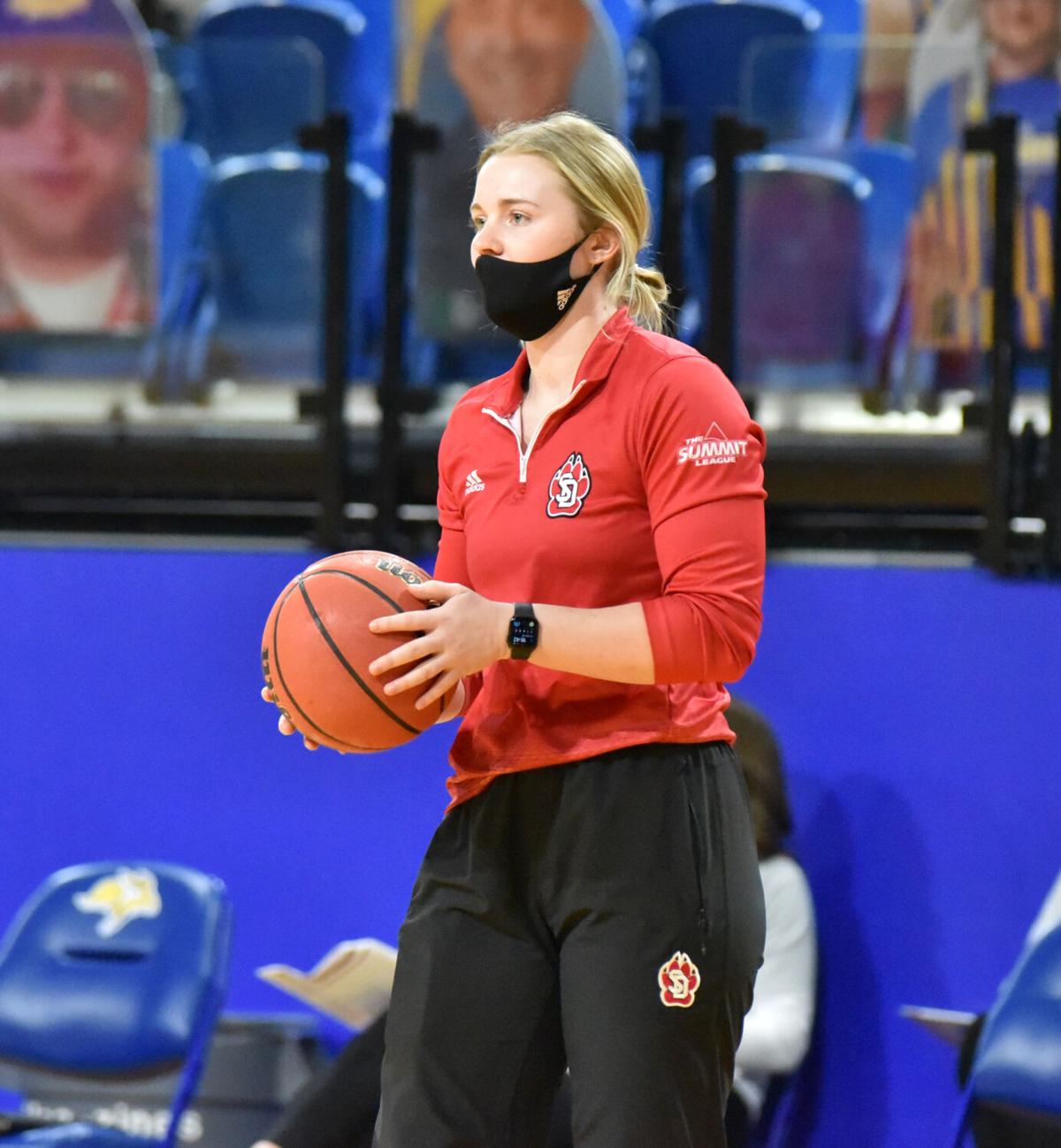 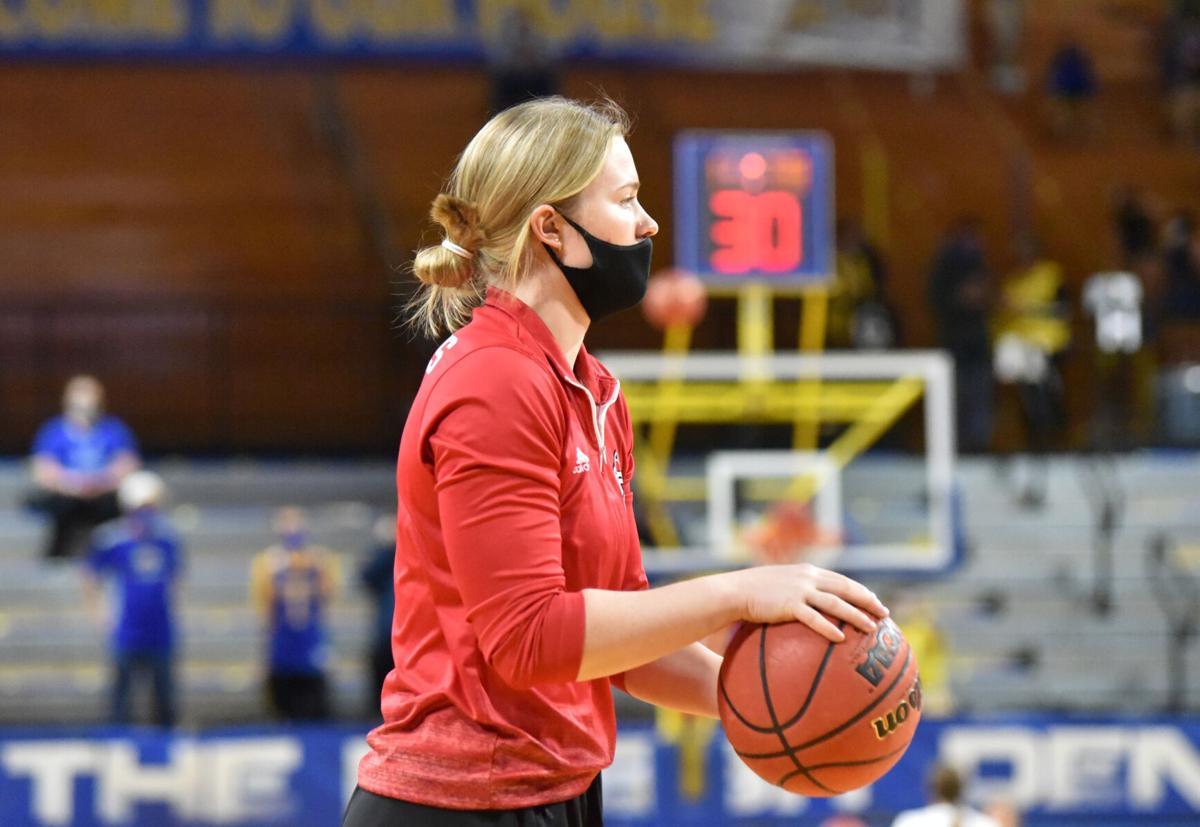 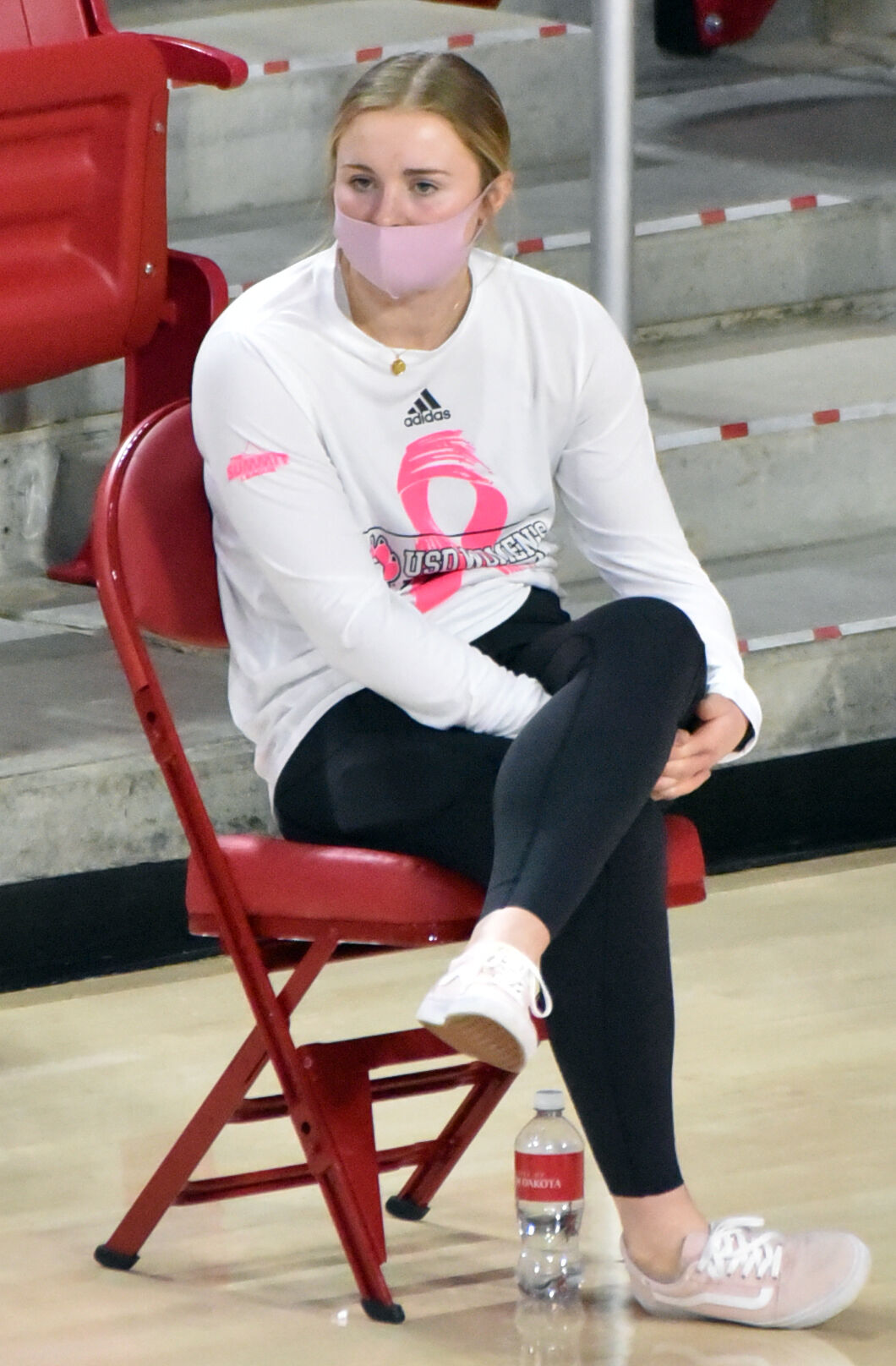 South Dakota's Monica Arens watches the action from the bench during the Coyotes' home women's basketball game against Oral Roberts on Feb. 21. 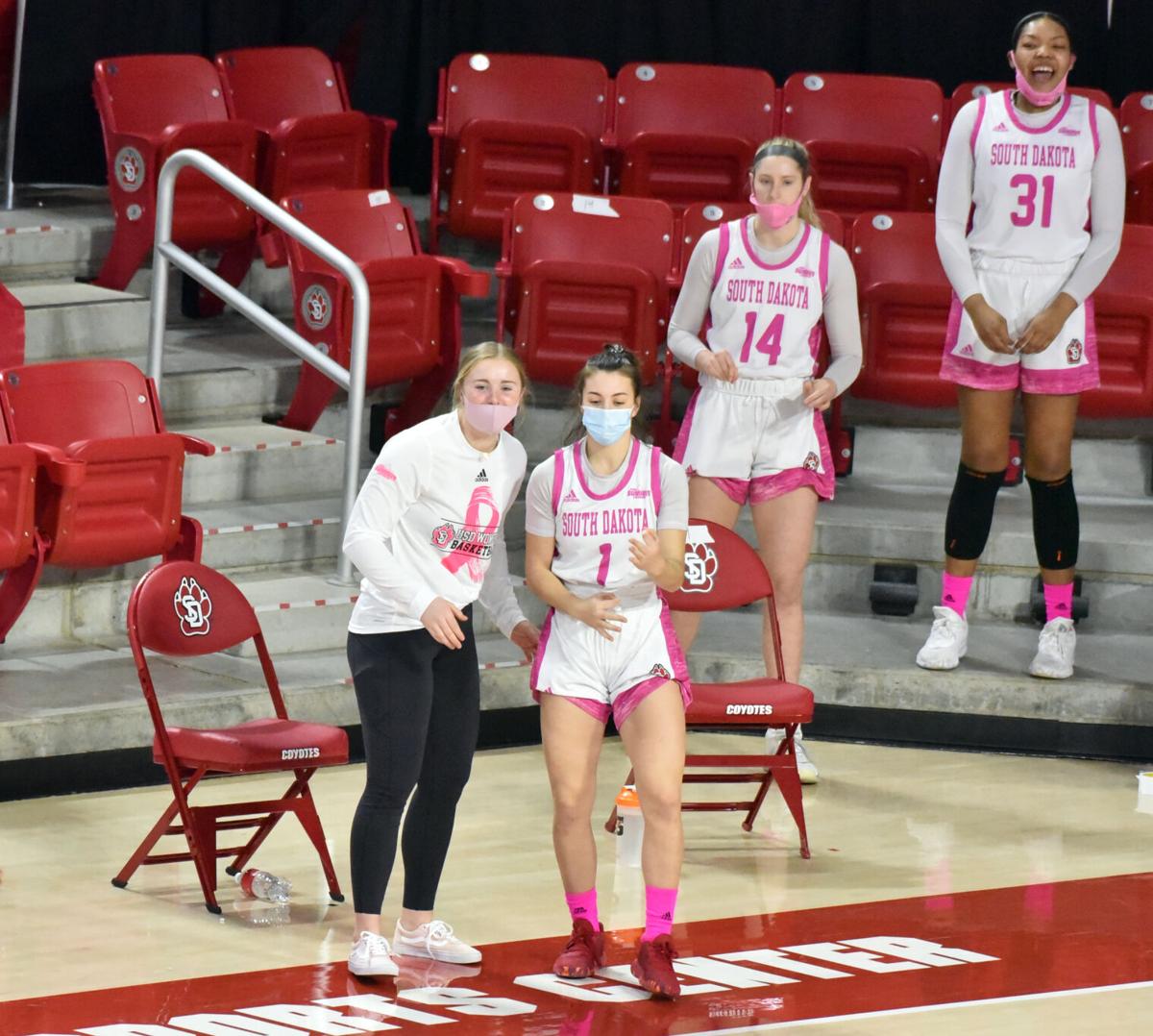 South Dakota's Monica Arens (left), Claudia Kunzer (1), Regan Sankey (14) and Aspen Williston (31) cheer after a made three-pointer by a teammate during the Coyotes' home women's basketball game against Oral Roberts on Feb. 21.

South Dakota's Monica Arens watches the action from the bench during the Coyotes' home women's basketball game against Oral Roberts on Feb. 21.

South Dakota's Monica Arens (left), Claudia Kunzer (1), Regan Sankey (14) and Aspen Williston (31) cheer after a made three-pointer by a teammate during the Coyotes' home women's basketball game against Oral Roberts on Feb. 21.

VERMILLION — This wasn’t supposed to happen.

Not to Monica Arens.

Not to one of the toughest players on any team. Not to someone who has mastered the art of taking charges — you’re not going to see that statistic listed in many other players’ biographies.

Yet, injuries don’t discriminate. So when the Crofton, Nebraska, native and senior on the South Dakota women’s basketball team suffered a non-contact yet still debilitating knee injury last August, it was a massive shock to her system.

Suddenly, there were unexpected but nonetheless valuable life lessons thrown her way.

“I’m not saying I ever took playing for granted, but absolutely,” Arens said during a wide-ranging virtual interview Friday morning.

“I can honestly say, I never thought in a million years that I would have an injury like this. You don’t think it can happen to you.”

It came with something as simple as a drive to her left — “a move I’ve probably made a million times” — and then a jump-stop. That’s when her knee gave out.

Arens underwent surgery to repair the torn ligaments, but was faced with the prospect of missing her senior season. And, even the more frustrating, it came after USD’s NCAA Tournament run last season was halted before it ever began because of the coronavirus pandemic.

Suddenly, the sense of loss was magnified for Arens, who started 31 of 32 games last season when the Coyotes won the Summit League tournament title and finished with a 30-2 record.

“It’s been a roller coaster of emotions,” she said.

With the ups and downs of that ride has come a newfound perspective; that you never know when something could be taken away.

“Not just with basketball, but people and relationships,” Arens said. “It’s really made me take a step back and appreciate what I have, and the people I have around me. It was a huge eye-opener.”

Through all of the frustrating moments, and all of the practices and games where she is relegated to a supportive role for her Coyote teammates, Arens has tried to remain positive.

While there’s still a chance she could return next season (more on that later!) due to the NCAA extending a season of eligibility to fall and winter athletes, Arens has been relegated to a new role this season.

She’s out on the floor with her teammates during practices or in the pregame shoot-arounds, but once the games begin, she’s on the bench for moral support.

“I usually led more by example than I did with my voice, so that was a big change for me, figuring out how to help my teammates through more of a vocal role,” Arens said.

It’s not always been an easy transition, however, she’ll tell you.

Nobody would wish to have an obstacle thrown at them, but there is a certain silver lining that comes with dealing with something like this. That’s where Arens would tell you she’s especially grown, as a person and yes, as an athlete.

“Having to find a different way to look at things,” she said, “and finding a different perspective in how I can make the best out of the situation.”

She understands that a potential knee injury comes with the territory. It’s a risk any player takes when they step onto the court, the field, or wherever. It was nobody’s fault, Arens said; it couldn’t have been prevented.

What she couldn’t do was sulk and let the setback get her down.

“I couldn’t feel bad about it; I couldn’t hang my head,” Arens said. “I just had to really try to have a positive attitude.

“If I feel bad for myself, it makes it a hundred times worse.”

Without Arens out on the floor this season, it’s not as though the Coyotes have taken a significant step back or anything. They’re sitting at 14-5 and second in the Summit League (10-2) heading into this weekend’s home series against North Dakota State — USD is also locked into the No. 2 position for the conference tournament, which begins next weekend.

It’s at this point in our conversation where Arens waits for it. She knows the topic of ‘what about next year?’ is coming.

“I figured that question would be asked,” Arens said.

“I’ll give you the same answer I give everybody: I have no idea yet,” she added. “It’s kind of an internal struggle a little bit. With my academics, it puts me in a tougher situation.”

She would love nothing more than to be able to tell people she’s coming back, but there’s a lot on her plate; there’s a lot to consider. For one, she’s a nursing major and is certainly busy with her clinicals.

“I’m not somebody who is OK with giving 50 percent to something,” Arens said.

If she is told by academic advisors or coaches, for example, that she wouldn’t be able to devote 100 percent to one area, it would be hard for her to move forward with both.

“It wouldn’t be fair to anybody,” Arens said.

She added that she’s glad to be surrounded by the kind of support system — university, coaches, teammates, fans, community — that will have her back no matter what she decides to do.

“I have a hundred percent confidence that no matter what I choose, I will have everybody’s support,” Arens said.

“And that’s been such an uplifting thing in going through this and trying to figure out what I’m going to do.”