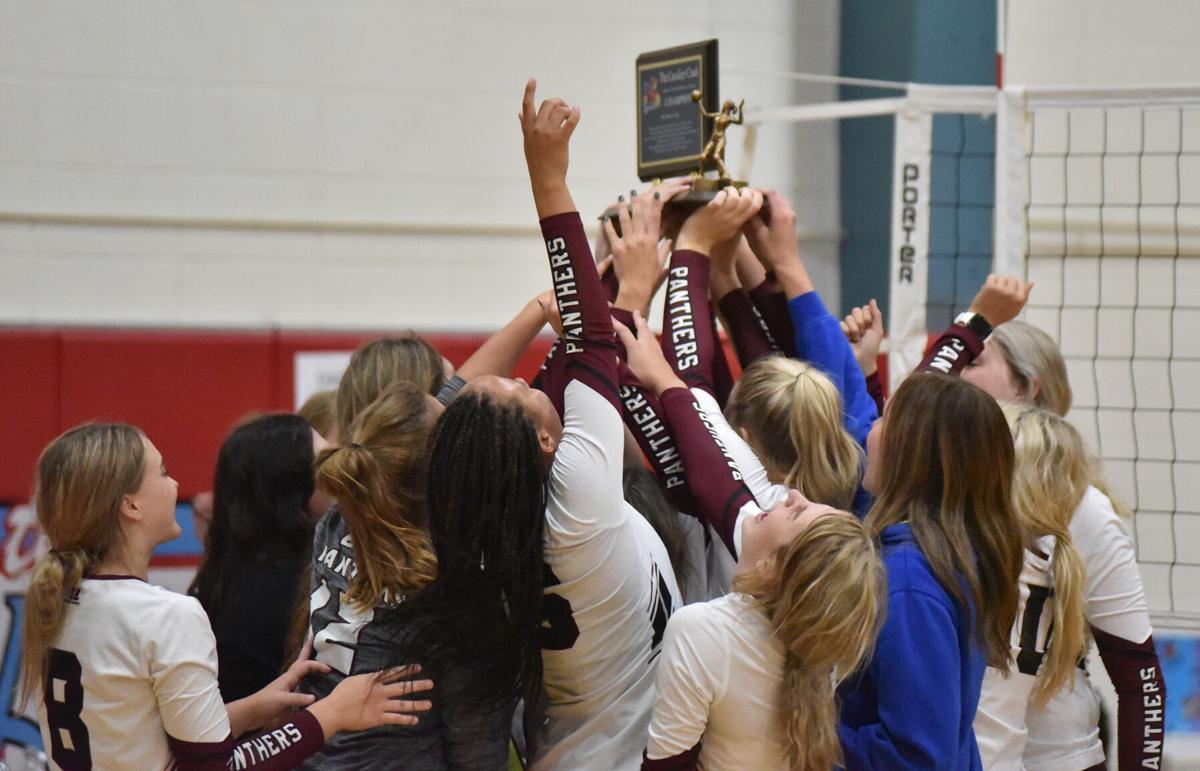 Platte-Geddes celebrates after winning the 2021 Cavalier Clash volleyball tournament this past September. The Black Panthers are the top seed in the Class B field of the South Dakota State Volleyball Tournament, which begins Thursday in Rapid City. 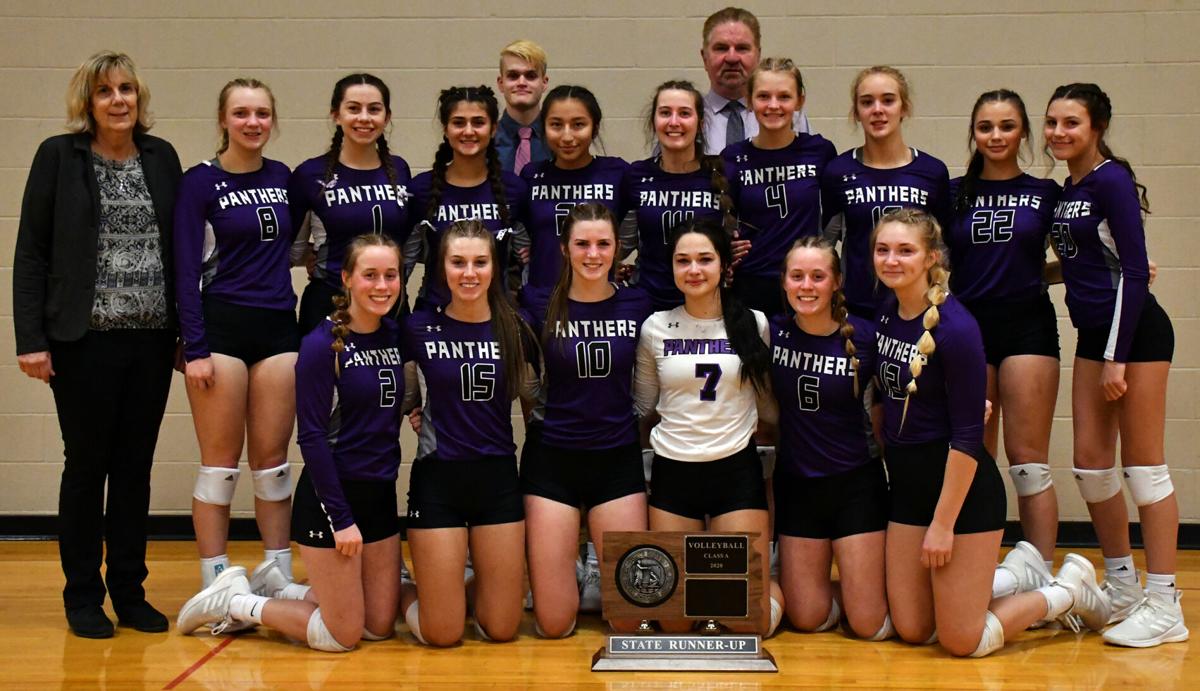 Dakota Valley, second at state in three of the last four state tournaments, is the third seed in the Class A field this year. 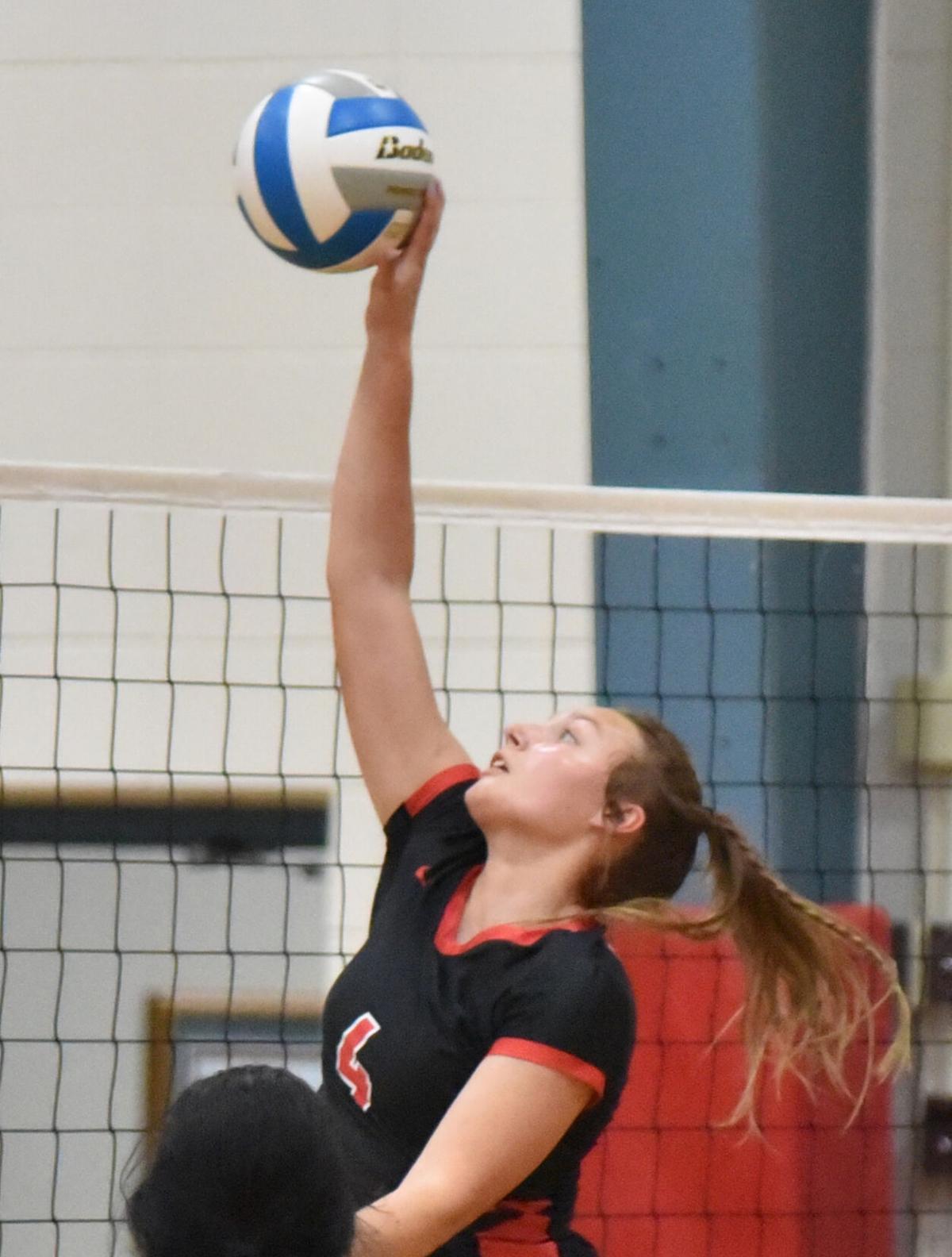 Wagner’s Macy Koupal hits the ball over the net during a match earlier this season. Koupal is the setter for the Red Raiders, the fourth seed in the Class A field. 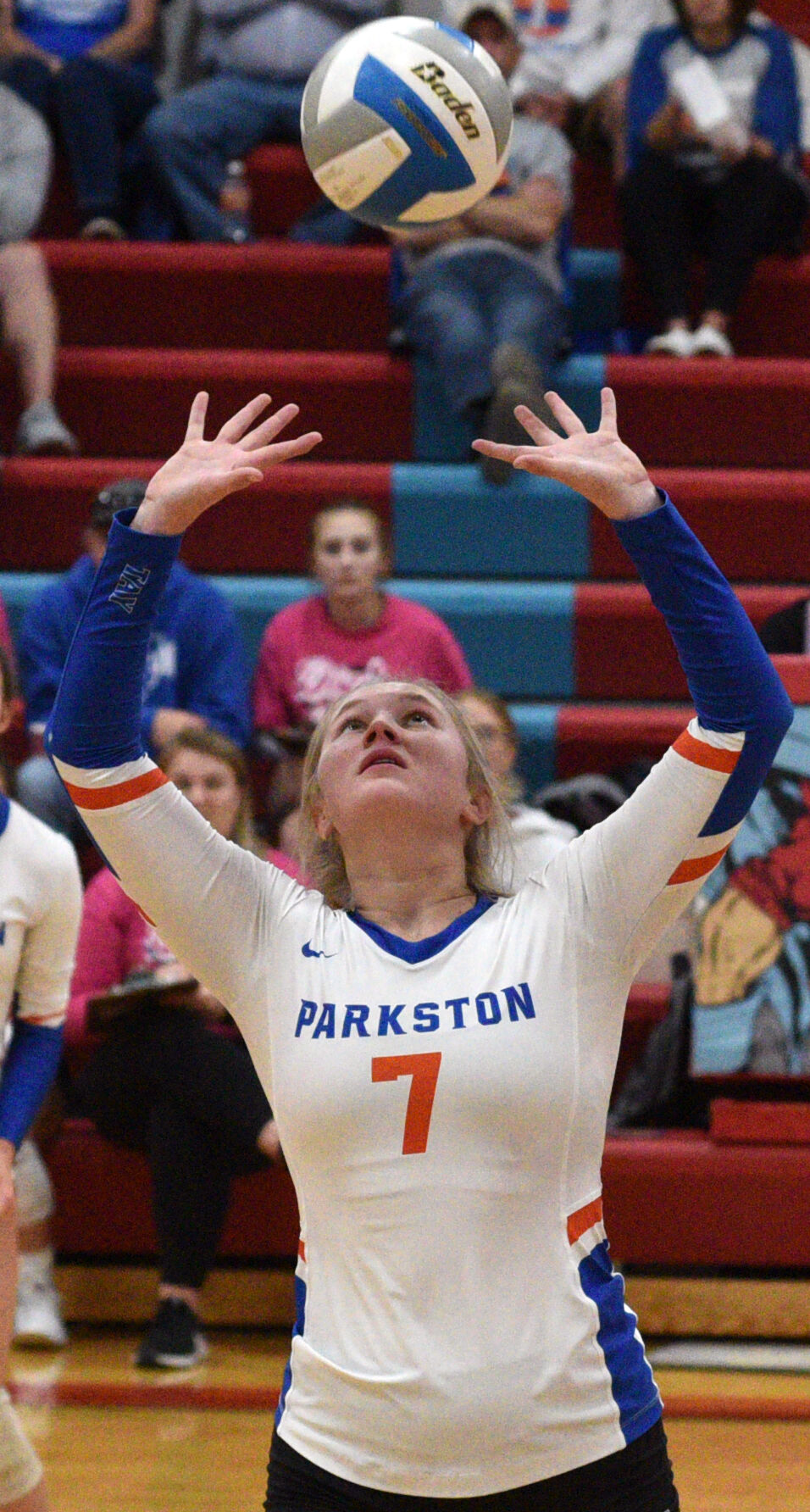 Setter Faith Oakley and the Parkston Trojans are the eighth seed in the Class A field.

Platte-Geddes celebrates after winning the 2021 Cavalier Clash volleyball tournament this past September. The Black Panthers are the top seed in the Class B field of the South Dakota State Volleyball Tournament, which begins Thursday in Rapid City.

Dakota Valley, second at state in three of the last four state tournaments, is the third seed in the Class A field this year.

Wagner’s Macy Koupal hits the ball over the net during a match earlier this season. Koupal is the setter for the Red Raiders, the fourth seed in the Class A field.

Setter Faith Oakley and the Parkston Trojans are the eighth seed in the Class A field.

EDITOR'S NOTE: This article has been updated to include coach's comments from Dakota Valley.

Four area programs, three in Class A and one in Class B, are headed to Rapid City this week to compete in the South Dakota State Volleyball Tournament. The event will be the first statewide sporting event held in Summit Arena at The Monument, the new facility in Rapid City.

Here is a look at the four area tournament teams:

Black Panthers head coach Melissa Johnson was not surprised that her squad is headed to state. Going in as the top seed, that’s another matter.

“It was something I definitely felt we could do,” she said, referring to qualifying for state for the first time since 2016. “I did not expect the number one seed. It was a good surprise.”

Platte-Geddes’ attack has been powered by a trio of athletes that all started their varsity careers as eighth graders: junior Regan Hoffman and sophomores Karly VanDerWerff and Cadence Van Zee.

“Karly and Cadence — our two ‘vans’ — have quite a bit of experience,” Johnson said.

In her four years as a varsity starter, the 5-5 Hoffman has alternated between libero and outside hitter.

“She’s really taken on that outside role,” Johnson said. “She’s done such a great job coming into that role.”

Running the Black Panther offense has been Avery DeVries. The 5-5 junior amassed 1,002 assists on the season, giving her over 2,000 for her career. She also has 33 blocks and 248 digs.

“She hit 1,000 (assists) late last year, and we ended up celebrating it at the beginning of the season,” Johnson said. “All of a sudden we look at the stats and see she was going to get over 2,000 for her career this season.”

The Black Panthers have relied on a strong defense to feed that powerful offense. Sophomore libero Hadley Hanson has 366 digs, with fellow sophomore Baleigh Nachtigal recording 219 digs. Addyson Boltjes, the lone senior in the rotation, has 31 blocks.

“We’re kinda tall but not that tall. We don’t have any 6-footers out there,” Johnson said. “Our serve-receive is so important to keeping the ball going for us, and we do really well at it.

“We’re really good at serving, too.”

“It’s not just a few servers, it’s quite a few for us,” Johnson said.

Platte-Geddes does not have to go far for its scout on its first-round opponent, regional rival Burke. The teams met twice during the regular season, with the Black Panthers earning a 3-2 victory on Sept. 21 and a 2-0 victory on Oct. 23.

“Burke has always been a defensively aggressive team,” Johnson said. “It’s something we’ve strived for with our team. They’re going to be a tough competitive team.”

For the Black Panthers to live up to their high seed, they’re going to have to beat Burke at its own game, Johnson said.

“If we outhustle teams, we’re going to be tough to beat,” she said. “We have other components going for us, but we need to fight for that ball.”

The Dakota Valley Panthers have finished second in each of their last three trips to state. Though the Panthers are the third seed, their goal is the same: play for a state title.

The Panthers have competed in eight of the last nine state tournaments, with top-three finishes in seven of those tourney trips. Dakota Valley won titles in 2013 and 2016.

“Jorja is primarily a middle, but she gets a lot of swings from a lot of different places,” said Panthers head coach Mary Miller. “Sophie Tuttle is having a nice breakout season. Sammi Archer is undersized, but she gets her shots and has good ball control.”

Junior Logan Miller has handled the setting duties, recording 846 on the season. She also has 77 kills, 20 blocks and 164 digs.

“We have a setter that jump-sets everything. That opens up hitters for more one-on-one opportunities,” Coach Miller said. “We try to move around as much as we can so the blockers can’t catch up.”

Twins Kate and Reagan Van Rooyan, both juniors, help patrol the back row for the Panthers. Kate has 410 digs and 29 ace serves on the season, while Reagan has 193 digs and 20 ace serves.

“Hamlin had a great basketball team. They were in the finals,” Coach Miller said, referring to the Chargers’ athleticism. “Abraham is their go-to. She’s not explosive, but she’s steady.”

For the Panthers to make another run to the championship match, they need to take care of fundamentals, Coach Miller said.

“It comes down to serving and passing,” she said. “If we can stay in system and get the ball to Logan, our hitters will get a lot of nice swings. If we have our fundamentals going, we will be there Saturday night.”

A young squad with some key additions has Wagner in the state tournament for the first time since 2013.

“We had a great sophomore class coming back,” she said. “And the add-ons were awesome.”

“Emma probably wouldn’t have called herself a ‘volleyball player’ coming in. But she’s been a big offensive threat and has earned the opportunity to play all the way around,” Knebel said. “Nagel had a lot to learn, but she’s stepped in and been an energizer for us.”

“Averi has worked her tail off. She’s put in a lot of time to get better,” Knebel said. “Kya is a great blocker. Shona has really stepped into her role.”

Managing that offense is another sophomore, 5-9 setter Macy Koupal. Koupal has 908 assists, as well as 247 digs, 36 blocks and a team-high 57 ace serves.

“Macy has developed into quite the setter,” Knebel said. “She loves getting the ball to our hitters.”

Sophomore libero Madi Knebel has helped control the back row, posting 300 digs to go with her 53 ace serves.

To Coach Knebel, fifth seeded Hill City seems to be a favorable matchup for Wagner.

“We feel like we match up well,” she said. “We should pull out a win as long as we play our game.”

While the Red Raiders are focused on winning, Coach Knebel also wants the team to enjoy the moment.

“This is a group like no other, and we’ve got all our starters back next year,” she said. “A lot of them have never been to state before. I want them to take in the whole atmosphere.”

A balanced attack and a little determination have the Parkston Trojans in the state tournament for the first time since 2007.

“I knew we could get there,” said Parkston head coach Abbie Hobbick. “It was a matter of were we willing to work hard and play together as a team.”

“That’s been one of our weapons this year,” Hobbick said of the team’s offensive balance. “We can put it down from all positions.”

Spreading the ball around has been junior setter Faith Oakley (559 assists, 276 digs, 35 ace serves), who has also called her own number for 98 kills.

“Faith has been good at figuring out who to set the ball to, whether that’s the hot hitter or someone who can get through the other team’s block,” Hobbick said.

“We have figured out to go for the ball, and we’ve done a good job of that,” Hobbick said.

“They’re strong up front, with good blockers across the net,” Hobbick said of the Chargers. “The challenge will be finding a way through or around them.”

The Trojans will need to be on top of their game from the start, Hobbick said.

“We have to play some really good team defense. Our blockers need to be strong,” she said. “If we can take some speed off their ball so our defense can dig it for us, it will help.

“We need to continue to play well together, play for each other and keep working hard.”