The Yankton competitive dance team performed its Pom routine during the Yankton Invitational competitive cheer and dance competition at the Yankton High School Gym. The Gazelles compete in the state championships on Oct. 24 in Rapid City. 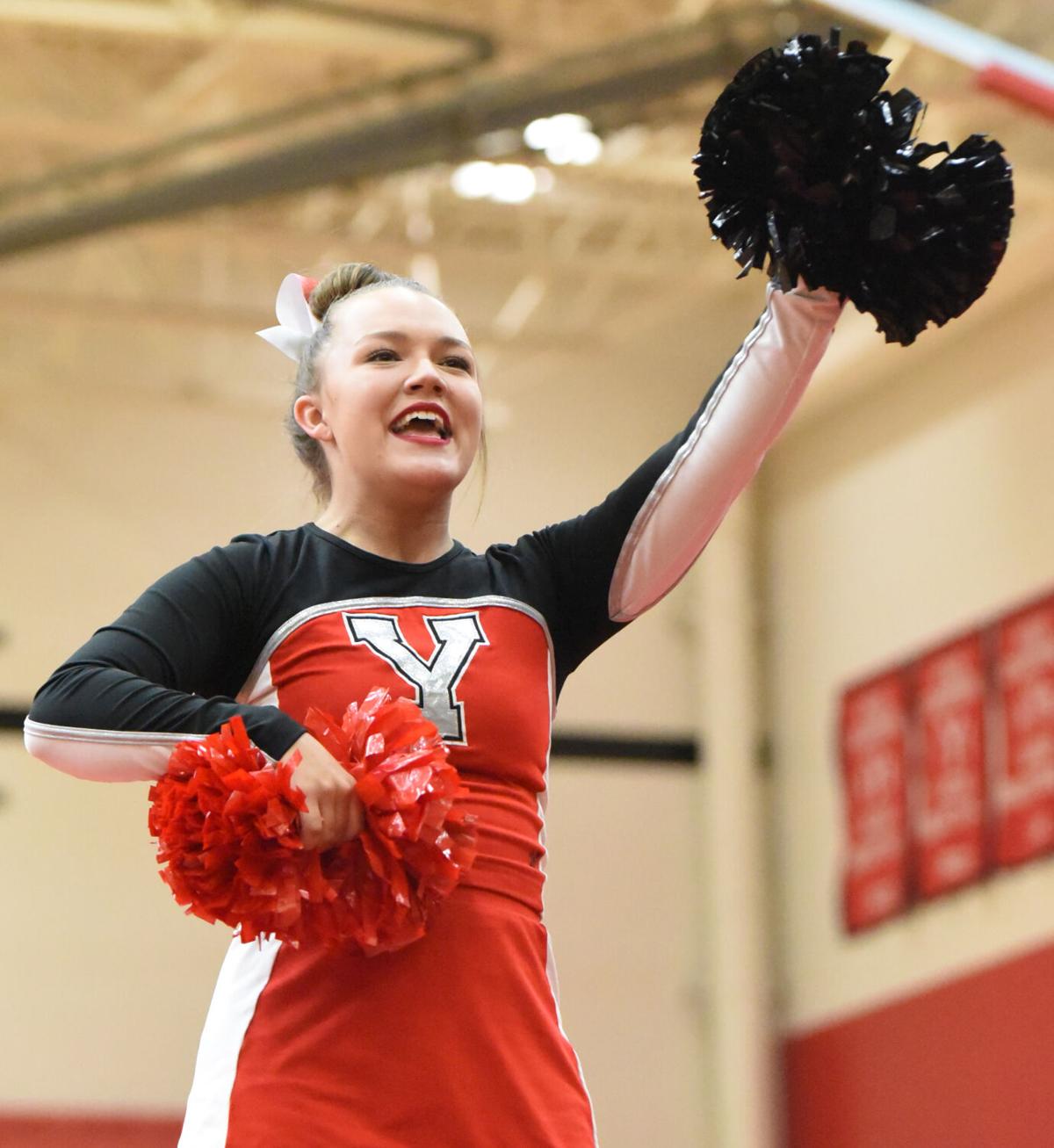 Members of the Yankton competitive cheer are headed west to the South Dakota State Cheer and Dance Championships in Rapid City. Class AA is set for Saturday, with Class A competition today (Friday).

The Yankton competitive dance team performed its Pom routine during the Yankton Invitational competitive cheer and dance competition at the Yankton High School Gym. The Gazelles compete in the state championships on Oct. 24 in Rapid City.

Members of the Yankton competitive cheer are headed west to the South Dakota State Cheer and Dance Championships in Rapid City. Class AA is set for Saturday, with Class A competition today (Friday).

After a season that both Yankton coaches felt might not get off the ground, the Gazelles competitive cheer and competitive dance teams are headed to the South Dakota State championships.

Class AA competition will be held on Saturday at the Rushmore Plaza Civic Center. The opening pod will begin at noon Central time, with the second pod, which includes Yankton, beginning at 3:30 p.m.

Yankton’s cheer squad will compete at approximately 4:02 p.m., with the dance team performing at 4:38 (Jazz routine) and 5:14 (Pom routine). The Gazelles will be the last team to compete in the event.

Here is a look at the Yankton and area teams competing in the event:

The Gazelles dance team has focused on one thing during the 2020 season:

From breaking down routines down into short segments to work on each move, to swapping out their poms for weights, the squad has done little things to make every move count.

“We’ve worked hard on sharpness, on crispness,” said Yankton dance coach Stacy Ryken. “We’re at the point where we (as coaches) can sit back, watch them dance and be so appreciative of the hard work they’ve put in.”

The hard work is evident when this season’s “parents’ preview” is compared with last week’s Eastern South Dakota Conference meet.

“Our turns were sharper and more together. They were more expressive,” Ryken said. “It was just amazing.”

Ryken would like to see the Gazelles move up one or more places from last year’s fifth place finish, a move that would give the squad hardware to bring home.

“I would love to come home with a first, second, third or fourth, some kind of plaque or trophy,” she said. “I want them to do the best they can that day.”

The Gazelles coach knows that, despite all the hard work to this point, the team will need to put everything together on the floor to make that dream a reality.

“At ESD, Brandon Valley had 17 points in deductions. They’re a great team, and (the deductions) are why they lost ESD,” Ryken said. “Like any other sport, just because you come in ranked number one doesn’t mean you can get away with having an off day.”

Yankton will compete in Pom and Jazz at state. One of the adjustments the SDHSAA made to Dance due to COVID-19 was reducing the number of dances per team to two, from three.

With the usual team bonding activities off the table, Gazelles coach Marissa Stephens and the squad had to find other ways to bring her young squad together.

“We made the best of what we had,” she said. “The girls have been grateful to compete.”

With a young squad, the early-season focus was on basics. The team has progressed greatly from there, Stephens said.

“It’s been amazing to watch them grow,” she said. “At the beginning of the season, our difficulty level was a 2. This weekend it will be between 3.5 and 4 (on a 5-point scale). It’s huge to make that big a jump.

“I’m proud of the growth they’ve made this season, and I’m excited to see where we’ll be next season.”

“Our goal is top 10. Realistically, I think we can get that,” she said. “We’ve been right there.”

Stephens also hopes to see her team “hit” the routine.

“I also want to see them come off the floor feeling like they did their best,” she said. “In Brandon (earlier this season), they were just stoked because they hit that routine. I’m hoping to see them reach that same feeling again.”

The Dakota Valley dance team will go for an 11th straight Class A title when it competes on Friday afternoon.

In cheer, teams will be looking to end Sioux Valley’s stranglehold on the division. The Cossacks are the only program to have ever won a Class A cheer crown.