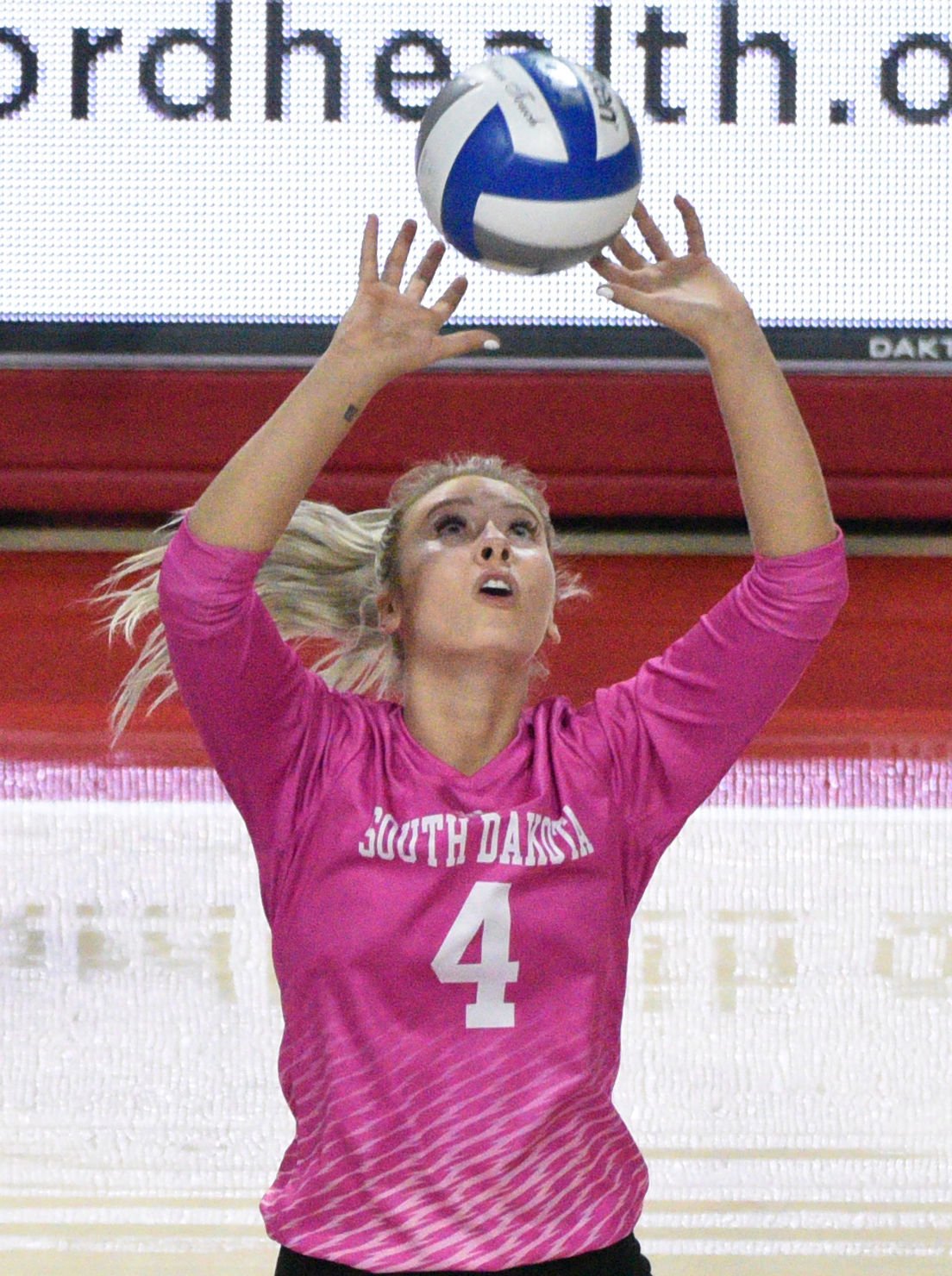 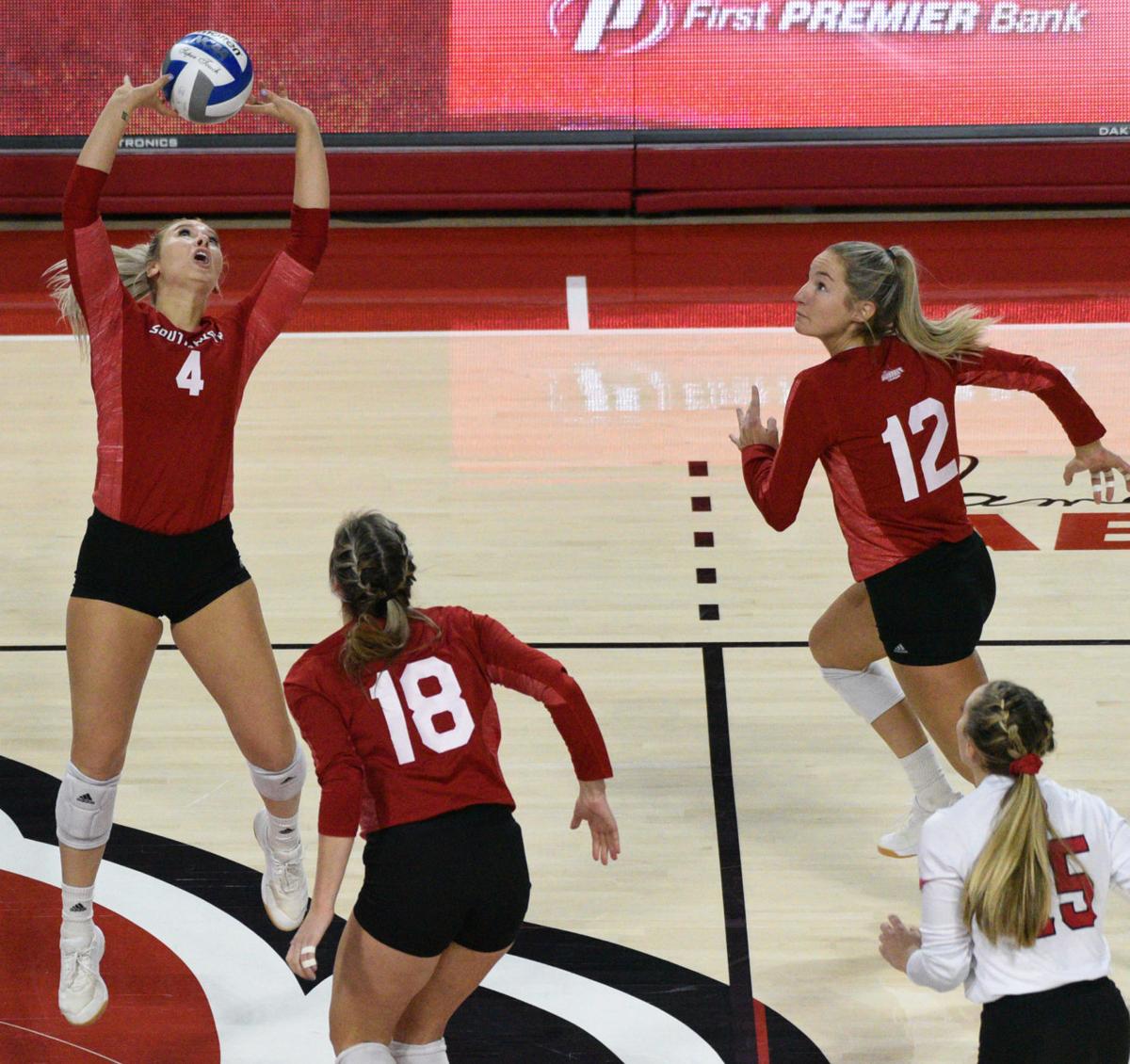 South Dakota's Madison Jurgens, 4, sets the ball as teammates Maddie Wiedenfeld (18) and Elizabeth Loschen (12) begin to approach the net during a Summit League volleyball match against Denver earlier this season at the Sanford Coyote Sports Center.

South Dakota's Madison Jurgens, 4, sets the ball as teammates Maddie Wiedenfeld (18) and Elizabeth Loschen (12) begin to approach the net during a Summit League volleyball match against Denver earlier this season at the Sanford Coyote Sports Center.

VERMILLION — How in the world could the South Dakota volleyball program ever replace Brittany Jessen?

Or, to rephrase it, how could anyone follow in those footsteps?

Madison Jurgens was ready for that challenge.

She sat out the 2017 season as a redshirt setter and watched as Jessen captured a third consecutive Summit League Setter of the Year recognition and polished off a career that included a program-record 4,826 assists.

“Her parents were always joking with me, ‘Go beat her records,’” Jurgens joked after Tuesday night’s win over South Dakota State.

“She helped me be the setter I am because of her competitive nature.”

Jurgens then adds, without missing a beat, “It wasn’t intimidating at all.”

The reins were then passed to Jurgens.

A sophomore from Odell, Nebraska, Jurgens ranks third in all of Division I with 11.54 assists per set, but importantly has emerged as a leader on a USD squad that has won 21 consecutive matches.

The Coyotes, now 24-1, can clinch the outright Summit League regular season title with a victory tonight (Friday) at home against North Dakota State. The match is set for 7 p.m. at the Sanford Coyote Sports Center.

Having already commanded an offense that won a conference tournament title and an appearance at the NCAA Tournament last season, Jurgens can now add yet another impressive accomplishment to a blossoming career.

“She taught me a lot,” Jurgens said. “Her being here and being that good really pushes me to be that good, too.”

Jurgens’ production as only a sophomore puts her in line (with 2,204 career assists) to potentially threaten the marks set by Jessen and Tori Kroll, the program’s last two four-year setters.

“They just set the ball so well, and I think ‘Jurgs’ has to really work for that sometimes,” said head coach Leanne Williamson, who has been with the program for all three setters.

“But she’s (Jurgens) really bought into learning the game, and I think that’s where she’s taking it to another level.”

No doubt Jurgens’ drive and grit have something to do with her being able to take the reins from Jessen and not miss a beat.

“I’m very determined in almost everything I do,” she said.

And it really doesn’t matter where.

It could be in the classroom, with family, with friends and yes, on the volleyball court. It’s a confidence she said comes from being pushed at a young age by her parents.

“It really formed me into the person I am today,” Jurgens said.

It’s a trait her teammates know well, too, according to senior Elizabeth Loschen.

“She always gives the best version of herself, either here or off the court,” Loschen said. “She prepares for every match like it’s a big match, which is really key for a setter.”

Even from last season to this season, Jurgens’ confidence and volleyball IQ and ability to make changes within a set have all improved, according to Williamson.

“Her knowledge of the game and our team and how we’re going to have success have improved tremendously,” Williamson said.

Prior to arriving at USD two years ago, Jurgens had already experienced plenty of success.

Her high school team (Diller-Odell) qualified three times for the Nebraska State Volleyball Tournament, and Jurgens was twice named her class’ Player of the Year (in D-1 and C-2).

She was then a redshirt on that Jessen-led 2017 squad at USD that won the Summit League regular season title.

But did Jurgens ever entertain any thought that she or the Coyotes would be at this level?

“I came in here wanting to win conference championships and win games at the NCAA Tournament, and now it’s a reality.”

As of this week, USD owns an RPI of 38, which would put the Coyotes squarely in the at-large pool for the NCAA Tournament should they not win the Summit League tournament.

“It’s just proving true that we can do this,” Jurgens said. “It’s really fun to know you can.”