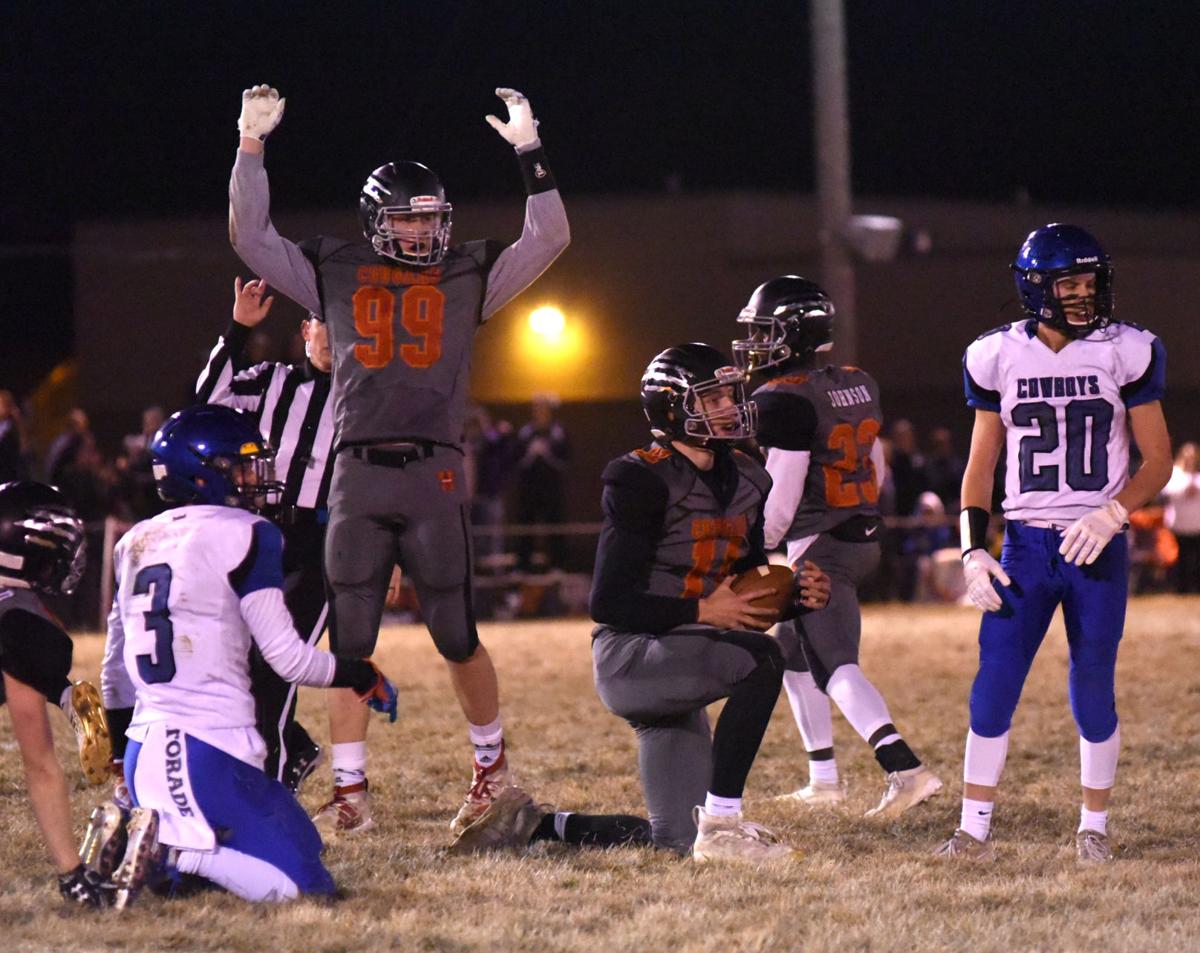 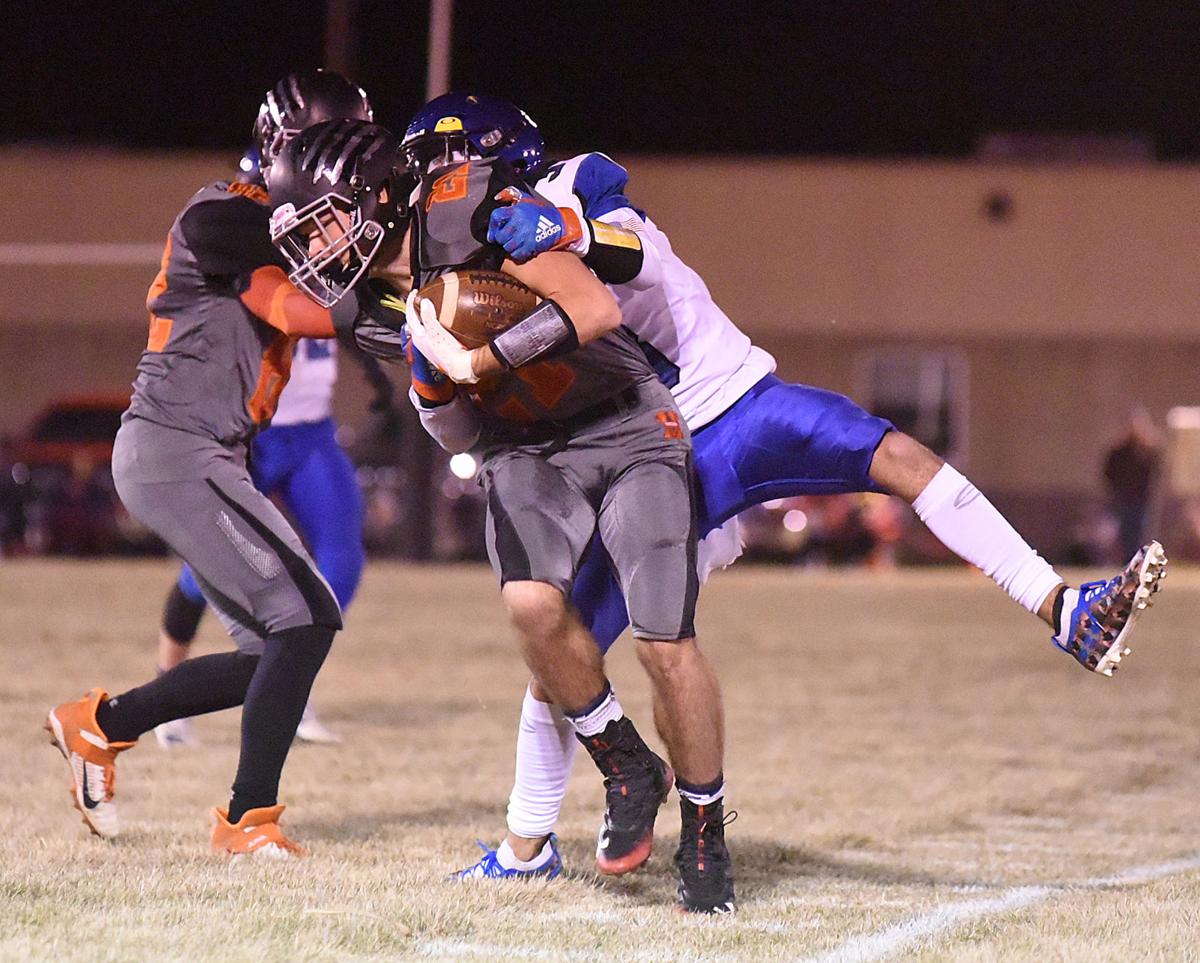 Viborg-Hurley's Carter Gust, front, is wrapped up by a Lemmon-McIntosh defender during Friday night's Class 9AA semifinal game in Viborg. 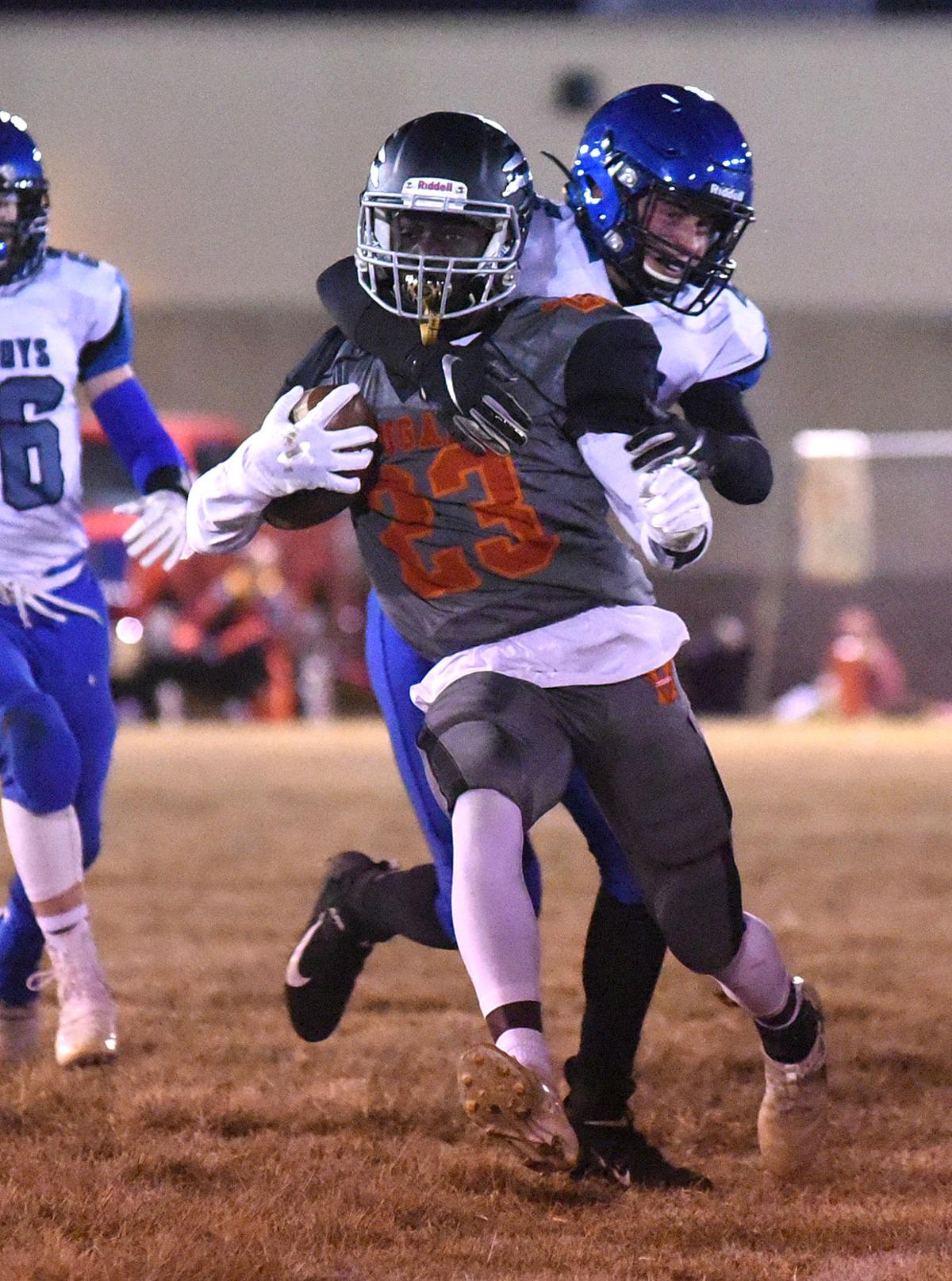 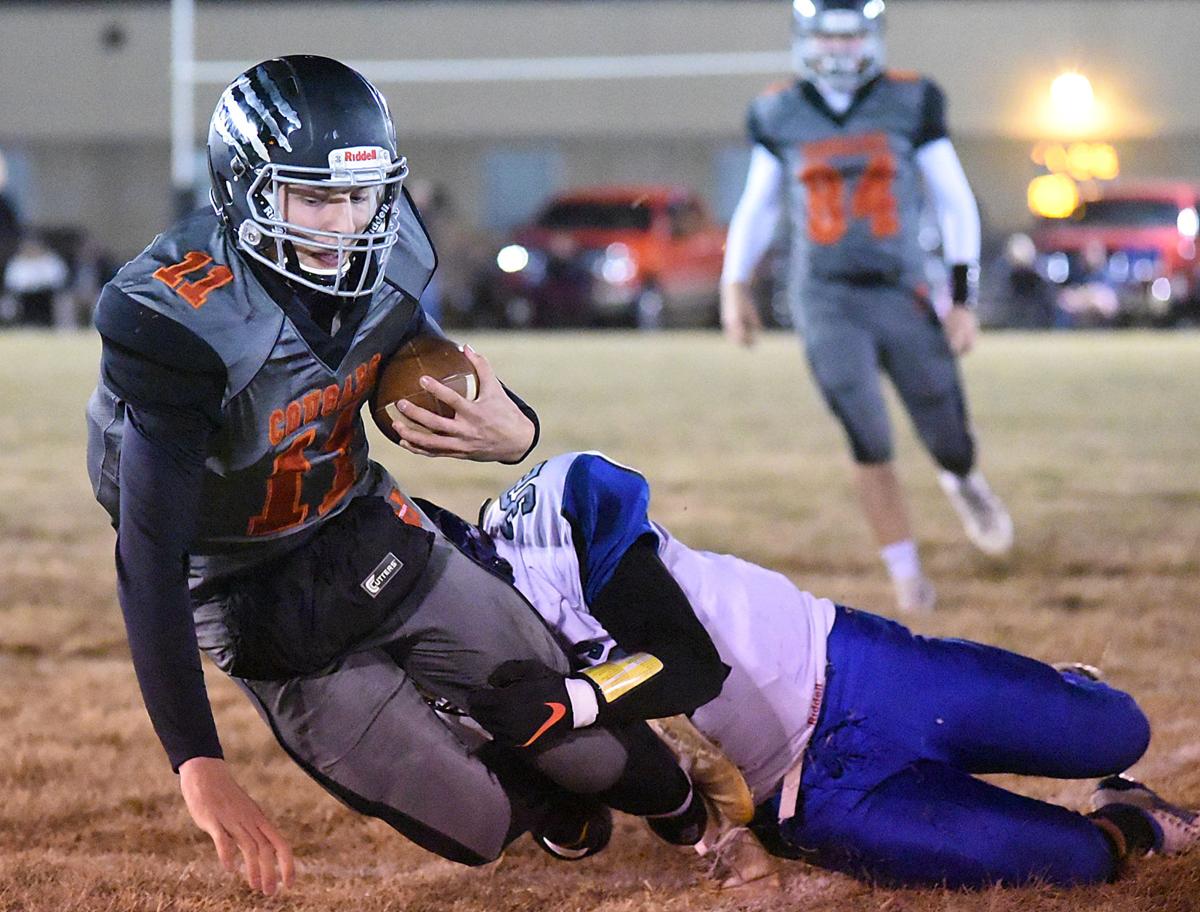 Viborg-Hurley quarterback Chase Mason, 11, is brought down by a Lemmon-McIntosh defender during Friday night's Class 9AA semifinal game in Viborg. 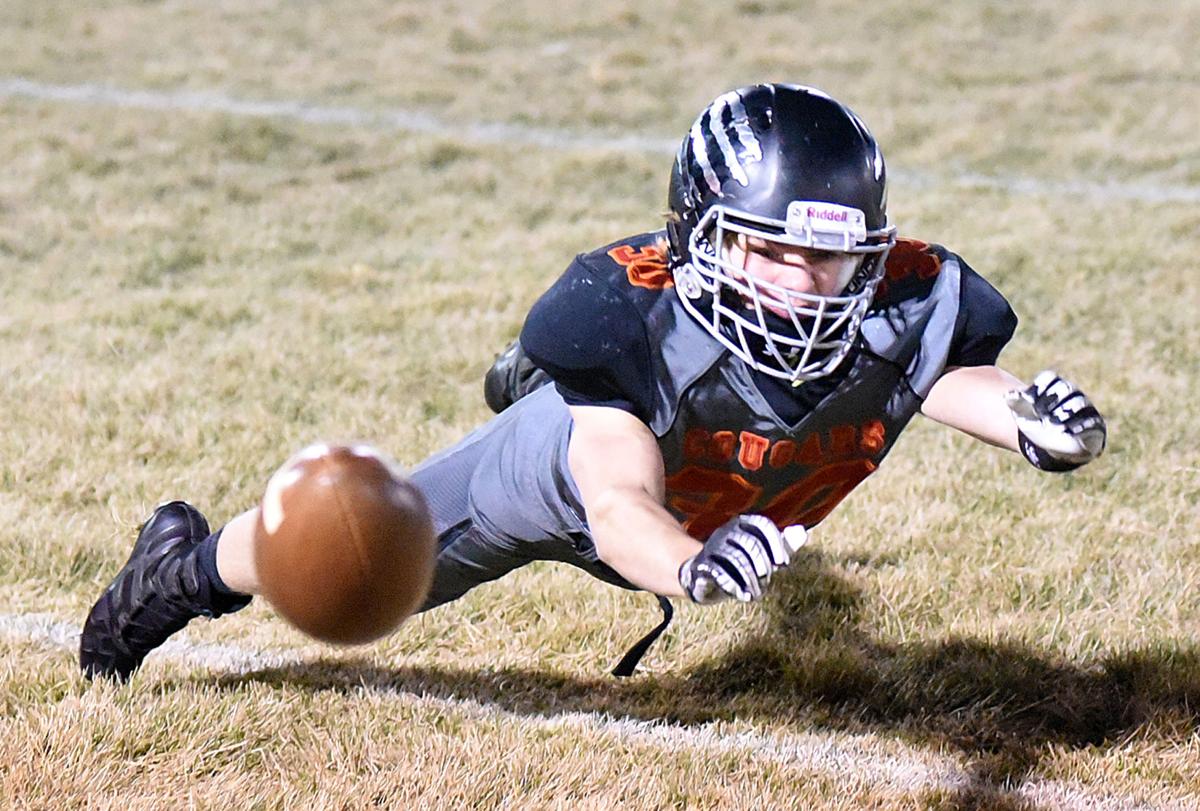 Viborg-Hurley's Carter Gust, front, is wrapped up by a Lemmon-McIntosh defender during Friday night's Class 9AA semifinal game in Viborg.

Viborg-Hurley quarterback Chase Mason, 11, is brought down by a Lemmon-McIntosh defender during Friday night's Class 9AA semifinal game in Viborg.

He got his chance.

Kessler had coached a handful of the current players on the Viborg-Hurley football squad during their junior football days. He then stepped away from education.

What he wanted, though, was an opportunity to some day coach those players again.

“I said a prayer,” Kessler said. “I wanted so badly to get a chance to coach these boys in high school.”

Five years ago he sought a way to get back into the teaching world. He was informed of an opening for a social studies teacher, and the rest was, as he said, history.

All these years later, Kessler’s team will play for a state championship.

That set off a celebration for the top-seeded Cougars (11-0), who will face Bon Homme in next Thursday’s 1:45 p.m. state final in Brookings.

It was all part of Kessler’s prayer.

“This is the culmination of a prayer from all those years ago,” he said during the post-game celebration.

The Cougars moved on thanks in large part to one crucial series of plays in the third quarter.

Viborg-Hurley had a 24-20 lead, but threw an interception deep in its own territory. Lemmon-McIntosh, which featured an explosive passing attack, then got the ball at the 10-yard line, but was unable to get closer and came away with zero points.

The Cougars then responded with a 70-yard drive that was capped off by a 5-yard touchdown run by junior quarterback Chase Mason.

What could have been a deficit for Viborg-Hurley turned into a two-score lead.

Lemmon-McIntosh (9-2) later scored on a Cody Thompson 1-yard touchdown run with 4:26 remaining in the fourth quarter, but Viborg-Hurley ran out the clock to secure the victory.

And that set off the celebration.

“I’ve been with this group for a long time now, and they’re really special to my heart,” Mason said.

As expected, it was a back-and-forth affair in the opening half.

So much so that the lead changed hands after each of the six touchdowns.

Viborg-Hurley pulled in front again on a Mason 17-yard touchdown pass to Cole Overgard at the 6:41 mark of the second quarter.

The two-point conversion gave the Cougars a 24-20 lead, and that’s the way it stayed through halftime.

Mason had a hand in three of Viborg-Hurley’s four touchdowns, while junior Angel Johnson added the other on an 8-yard run in the first quarter.

Those two were key contributors to a Cougars’ team that finished 4-4 last season, but it was a campaign that included a crucial performance that Kessler said set the stage for 2019.

Viborg-Hurley beat Howard in a game Kessler said not many would have given the Cougars a chance to win.

“What we realized is that these boys really have heart,” he said.

Viborg-Hurley then went out and put together a successful boys’ basketball season and then won a state track championship in the spring.

Then came a summer together in the weight room.

“This all started at the end of last year,” Mason said. “We had such a good end of the season, and then we worked hard over the summer.”

And now that hard work has paid off for the program’s first state championship game appearance since 2010.