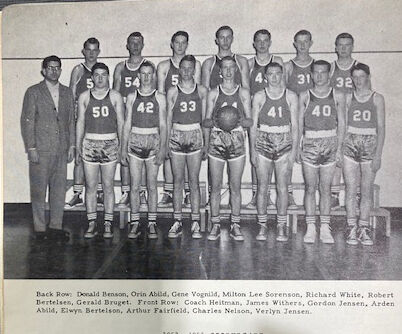 Wakonda Warriors from the 1952-53 season. Milt Sorenson is in the back row, fourth from the left. 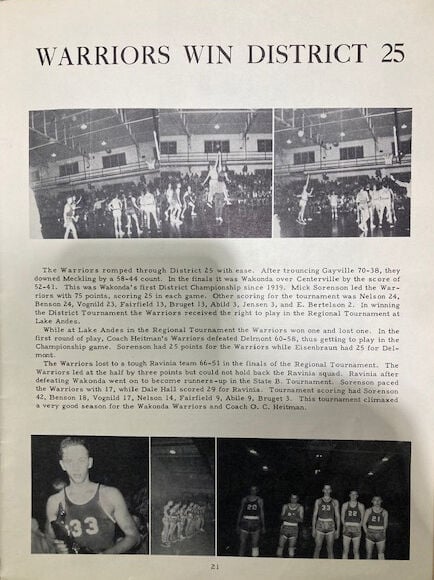 Wakonda Warriors from the 1952-53 season 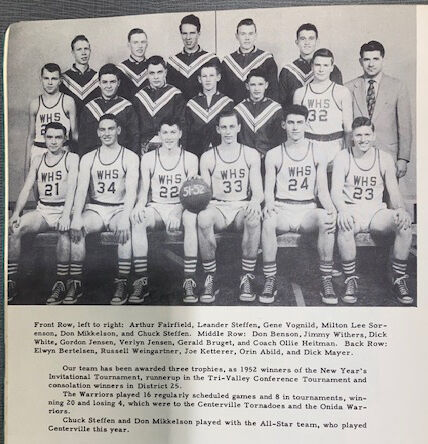 Wakonda Warriors from the 1952-53 season. Milt Sorenson is in the back row, fourth from the left.

Wakonda Warriors from the 1952-53 season

Has it, I wonder to myself.

It deserves to be retold, regardless, because there is likely a generation — or two — of basketball fans that has never heard of Milt Sorenson.

I’ll admit, I never had; only seen the name. Have you heard of him?

You should hear his story.

“He was like a legend,” says his sister, Nancy Swanson, when I reached her last week at her home in Sioux Falls.

And quite the prolific scorer; one of the best in this state’s history.

By the end of the current high school basketball season, Sorenson, however, will drop a few spots in the all-time rankings. He’s likely to be leap-frogged by one, potentially two, standouts: Yankton senior Matthew Mors and Dell Rapids St. Mary senior Connor Libis.

You’ve heard of those two.

Yet, I can’t help but think that Sorenson’s career has somehow flown under the radar half a century later.

Sorenson passed away in January 2013 at age 77, and although his sister — younger by six years — may wonder why you’re asking about him, she’s certainly not shy about boasting about her brother’s accomplishments.

“Evidently, my brother had a natural athletic ability,” Nancy says.

He played in a time when the young boys — most of them, at least — in Wakonda played as many sports as they could, but without the availability of advanced training facilities or team camps.

“They just learned to play and always played ball, whatever it was,” Nancy says.

Any kind of buzz over Sorenson’s scoring exploits, she adds, wasn’t circulated until the following day, because there weren’t large crowds to watch those games — not until postseason play, most likely.

“Kids didn’t go to games; it was another world,” Nancy says. “That was just life. We didn’t think anything of it.”

In fact, she can only remember watching her brother play on a few occasions at the old Wakonda gym — “it was very small.”

“In the sixth grade, I was not too aware of what was going on,” Nancy tells me. “I never went to any tournament game.”

She wasn’t alone, either.

“My parents hardly attended a high school game; I don’t know if my mother ever went to one,” Nancy says. “That’s a big difference from today. It’s a whole other experience.”

Following his high school career, Sorenson attended Southern Teachers College in Springfield, and then worked as a salesman until 1987. After his retirement, he worked at Elmwood Golf Course in Sioux Falls, and served as a high school official and referee for many years — I wish Colin Kapitan was still with us; I’m sure he’d have some great stories about Sorenson.

Even as the years passed, Sorenson held dear his high school basketball accomplishments. Nancy recalled to me a time when her brother suffered a stroke but tried to signal to her — he couldn’t communicate — that his career point total was on his mind.

“He got out his record books and would point to it; he couldn’t talk, but he would motion to the phone like he wanted me to call someone,” Nancy says.

So she did. She wanted to correct her brother’s total in the official record books. The number listed over the years wasn’t correct, at least in the family’s eyes.

With proof provided (Sorenson kept everything) to the proper officials at the S.D. Basketball Hall of Fame in Madison, Sorenson vaulted from sixth or seventh place all-time to No. 3 — “We feel 2,577 is true,” Nancy says.

His position will soon change, though.

With every 20-plus point game that Mors puts together for Yankton, we get closer and closer to Sorenson’s career mark being challenged — and keep in mind, Libis at Dell Rapids St. Mary will also likely crack the top-5 by the end of the season.

Let’s delve into the numbers a bit more.

Mors is averaging 26.2 points per game this season, and if he averages 26 points in those 15 games, that’s 390 more points to his tally — 375 more if he averages 25. Even if he only averages 20 points, that’s an additional 300 points, which would still pass Sorenson on the all-time list.

Mors (and Libis) will not reach Don Jacobsen’s second-place record of 2,825 points, but we’re still watching two of the best scorers in state history.

It’s during this part of the conversation that Nancy reminds me that when her brother played, there was no three-point line and that teams back then didn’t play as many games in a season. She also acknowledges that her brother began playing varsity basketball in the seventh grade, which certainly allowed him to get an early start on those 2,577 points.

Nancy, as I realize, is also familiar with Mors. Her children, she tells me, grew up in Canistota and that’s where members of the Mors family are from — “his grandpa was the oldest boy of one of the families; he was quite tall.”

At a funeral a few years ago, Nancy said she told someone, “That’s the kid from Yankton with all of the points” — “I could see the family features in his face,” she adds.