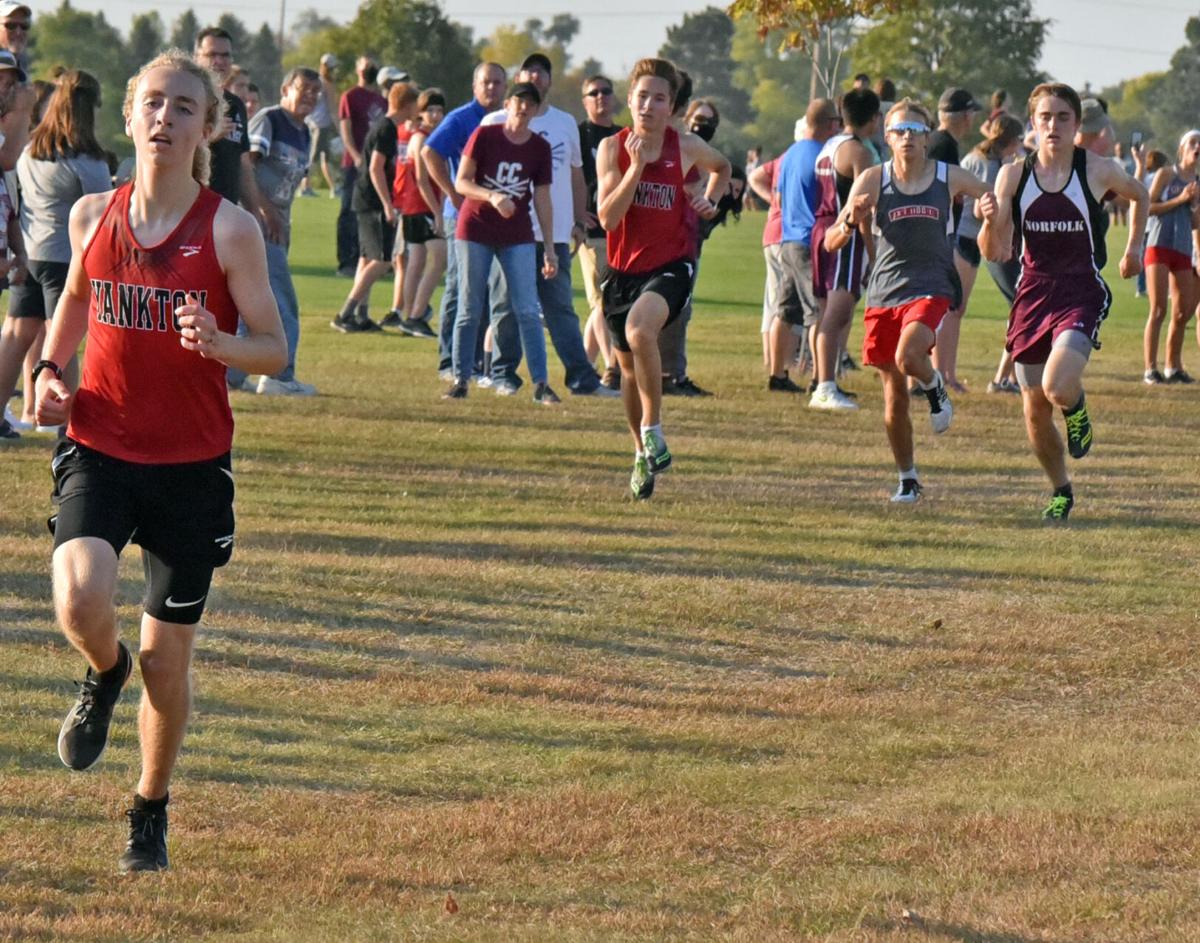 Yankton sophomore Zach Fedde, left, placed 20th at state a year ago. The Bucks are set to compete in the South Dakota State Cross Country Championships on Saturday.

Yankton sophomore Thea Chance was 16th at state a year ago. The Gazelles are set to compete in the South Dakota State Cross Country Championships on Saturday.

Yankton sophomore Zach Fedde, left, placed 20th at state a year ago. The Bucks are set to compete in the South Dakota State Cross Country Championships on Saturday.

Yankton sophomore Thea Chance was 16th at state a year ago. The Gazelles are set to compete in the South Dakota State Cross Country Championships on Saturday.

Yankton finished eighth in the girls’ race and 10th in the boys’ race in 2019. For the Gazelles that finish was “underachieving,” according to Youmans.

“You can do all the right things all year long, but if you don’t put it together in that one race, that race sometimes defines your season,” he said. “I think this year’s group is much better mentally and physically. They’re prepared for the adversity of expectations.”

The Gazelles have “been very consistent all year long,” but have closed the gap down the stretch.

“Last week, the gap between our first runner and our sixth was 39, 40 seconds,” Youmans said. “They’ve put in the time, paid their dues, and are now out for some of that success.”

Youmans has been pleased with the leadership of Kleinschmit, the lone senior headed west for Yankton.

“Tre has had a great close to the season,” Youmans said. “We want to send him off on a positive note.”

Another top-10 finish is the “first tier” goal for the Bucks.

“Second tier is top eight. It will take a little work,” Youmans said. “Third tier is, if we put it all together and get five across in good shape, sneaking on the podium (top six).

“If we do that, our guys’ team can surprise a lot of people.”

After a season that has been mostly hot and dry, the conditions for the state meet will be something different: a forecasted high of 29 degrees with snow likely as the day progresses.

“It will be a challenge for the kids. We’ve had nothing but nice weather, perfect conditions. Now, all of a sudden, it flips the switch,” Youmans said. “But it’s not unique — nobody’s had these cold, yucky days this season.”

To deal with the weather — and the rough Hart Ranch terrain — Yankton will need to “embrace the toughness.

“It’s going to be one of those weekends where your overall toughness will be tested,” Youmans said. “We’re counting on our kids to step it up and do our thing.”

The meet will follow a unique schedule this year due to COVID-19 concerns.

Awards for each class will follow that class’ boys’ race.

Here is a look at area entries in Class A and Class B:

The Watchdog girls return three of six runners from a squad that placed 10th as a team a year ago: seniors Laura Bogue and Gabrielle Engbarth, and junior Anna Atwood. Atwood just missed the podium, finishing 26th a year ago.

The trio are joined at state by sophomore Macy Quartier and seventh graders Harley Koth and Ella Merriman.

The Panthers will send a full boys’ squad to Rapid City.

Only one Dakota Valley runner was at state last year, junior Blake Schmiedt. He will be joined at state by senior Alex Messersmith, juniors Reede Donaldson and Keaten Wright, and sophomores Avery Bradshaw and Alex Olsen.

The Huskies will send one boy to state, freshman Joe Cross.

Ethan-Parkston will send a pair of freshmen boys to state, Evan Bartelt and David Brock. Bartelt ran at state a year ago.

The Pheasants will send one runner to state, junior Josie Leberman. She competed at state a year ago.

The Tanager boys will look for another high finish after placing second a year ago.

The quartet of returning runners are joined by sophomore Emery Bohnsack and freshman Joel Dahloff.

Freshman Taeli Barta just missed the podium a year ago, finishing 28th. She is joined by seventh grader Lydia Anderson.

The Red Raiders will send one boy to state, senior Michael Barnett.

The Cubs will send one boy to state, junior Karson Kruid.

The Andes Central-Dakota Christian Thunder will send two girls and one boy to state.

The Thunder girls feature sophomore Isabella Brouwer, fourth at state a year ago. She will be joined by seventh grader Lexi Schoenfelder.

On the boys’ side, the Thunder will be represented by freshman Peter Backes.

Freshman Tyler Tjeerdsma will make a return trip to state for the Pirate boys.

Junior Nate Hall returns to state for the Cavalier boys. He finished ninth a year ago.

He will be joined by one girls’ runner from Bon Homme, eighth grader Peyton Hellmann.

The Tornadoes will send a trio of Eide’s west for the girls’ race. Freshman Lillie Eide competed at state a year ago, and is joined by junior Sophie Eide and seventh grader Tessa Eide.

Because the Tornadoes send three runners, they will be able to score as a team if all three finish.

Also back for the Bearcats are junior Tim Epp and eighth grader Finley McConniel.

Jada Koerner will make another trip to state for the Bearcat girls. The junior will be looking to improve on last year’s 20th place finish.

Defending Class B girls’ champion Madison Fairley will look to bring home more hardware for the Raiders this year.

The Wolves send two boys and two girls to state.

The only area team in Class A or Class B to qualify both teams for state, Platte-Geddes will be looking for another strong showing.

The trio will be joined by sophomore Gavin Gustad and eighth grader Emmit Holzbauer.

They are joined this year by freshman Hannah Kirsch.

The Cougars qualified one boy for state, sophomore Gage Skjonsberg.