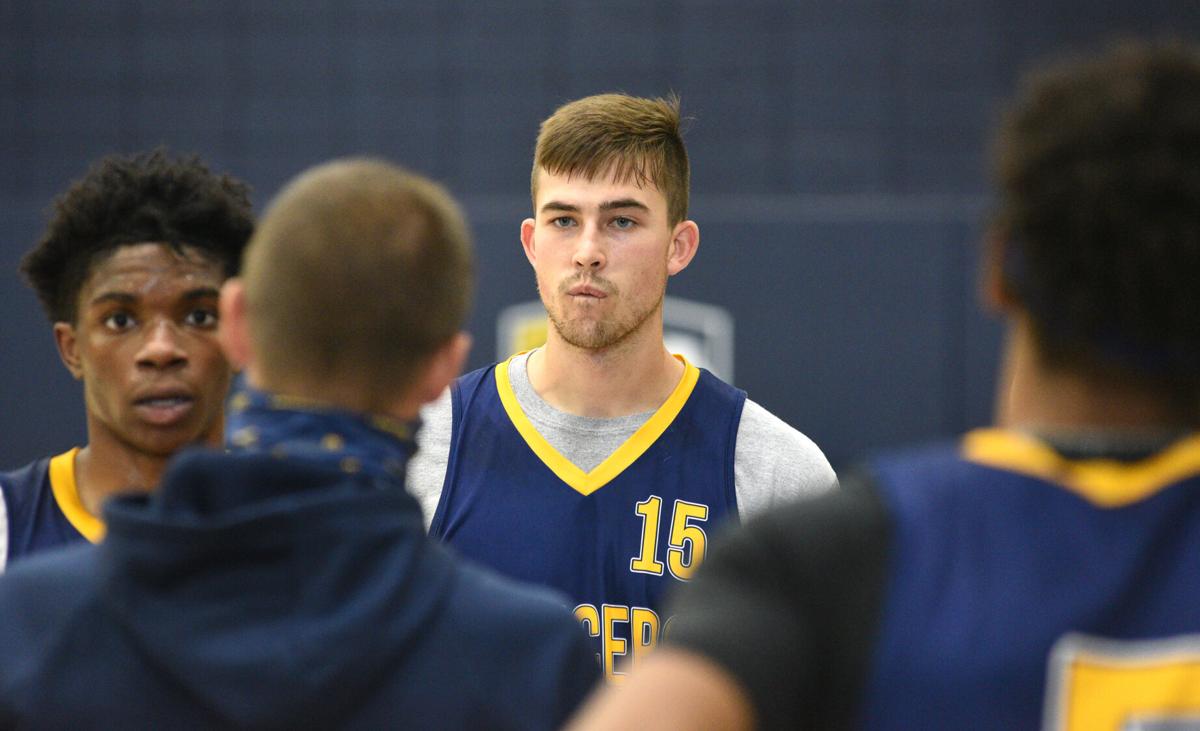 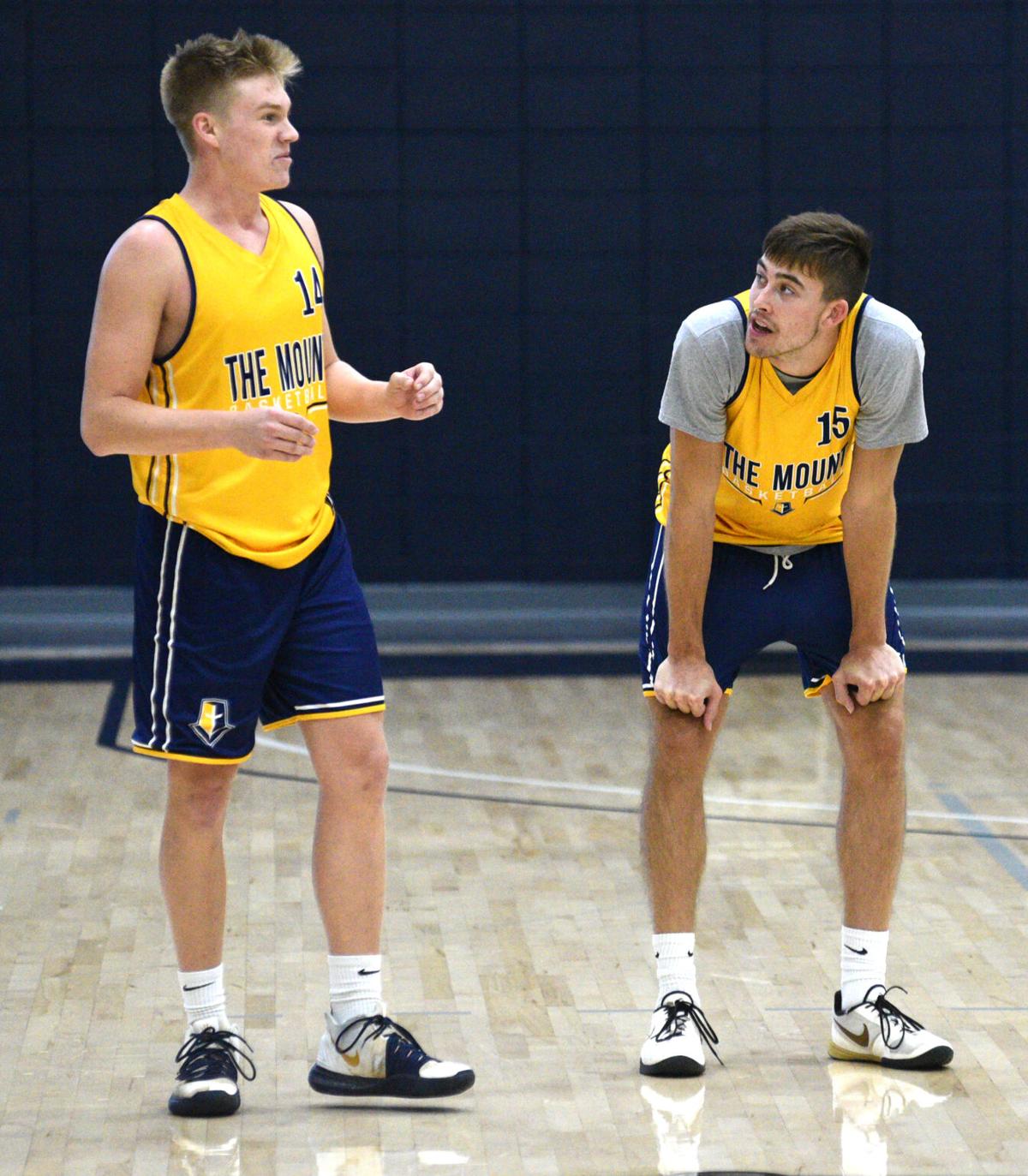 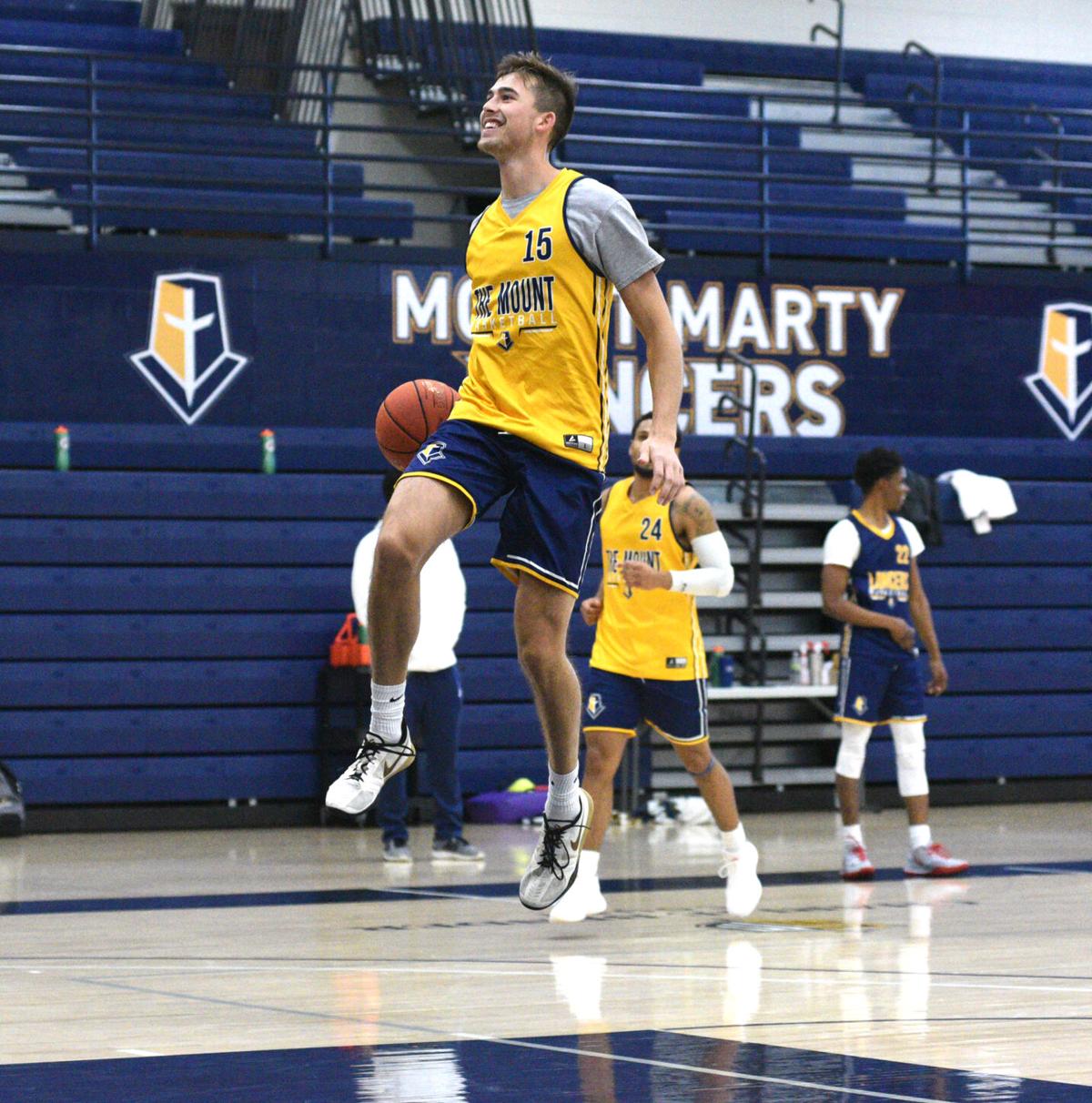 Chad Moran decides against going up for a dunk during a Mount Marty University men's basketball practice last Saturday at Cimpl Arena. 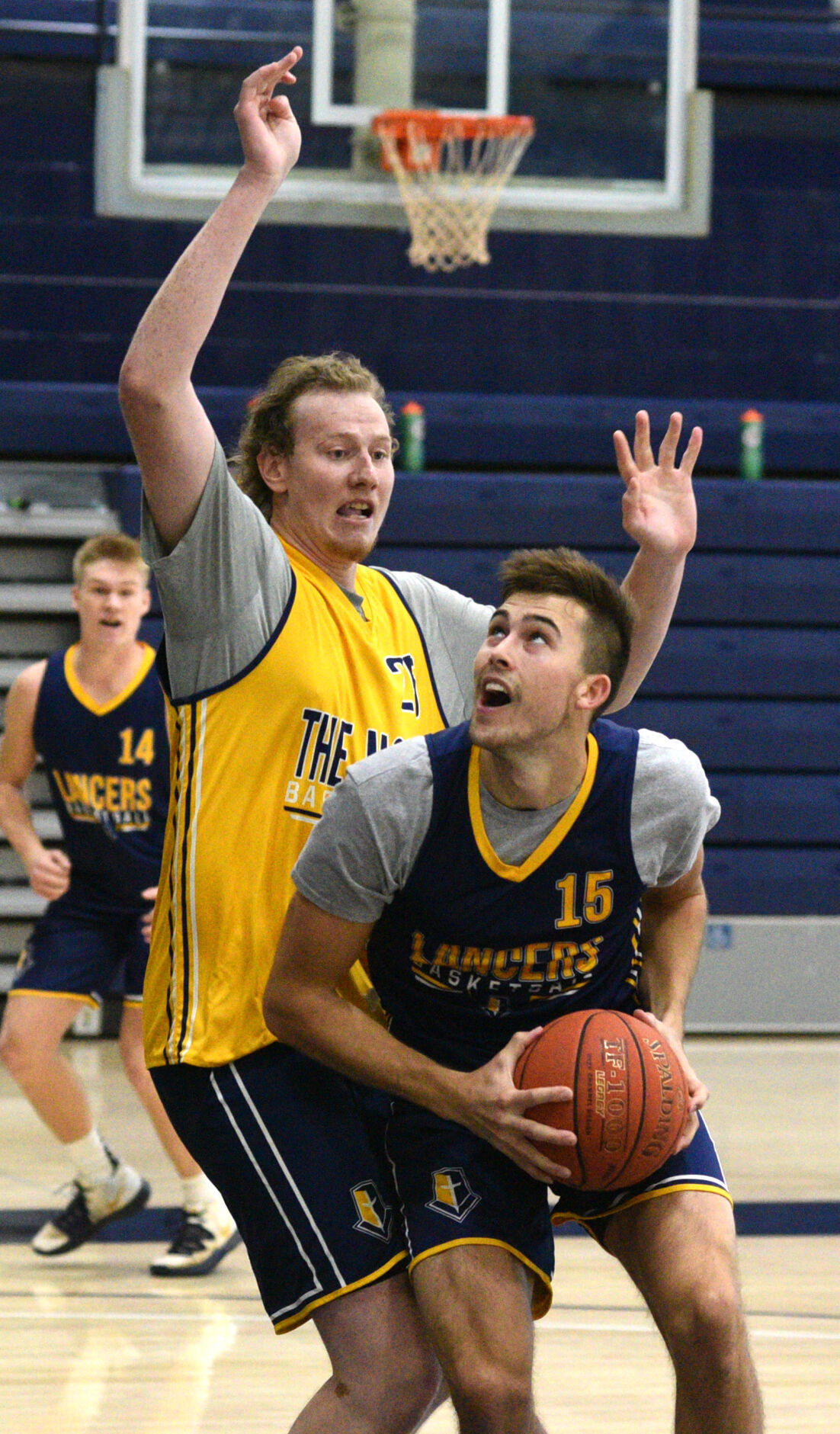 Chad Moran, 15, looks to go up for a shot against teammate Lincoln Jordre during a Mount Marty University men's basketball practice last Saturday at Cimpl Arena. 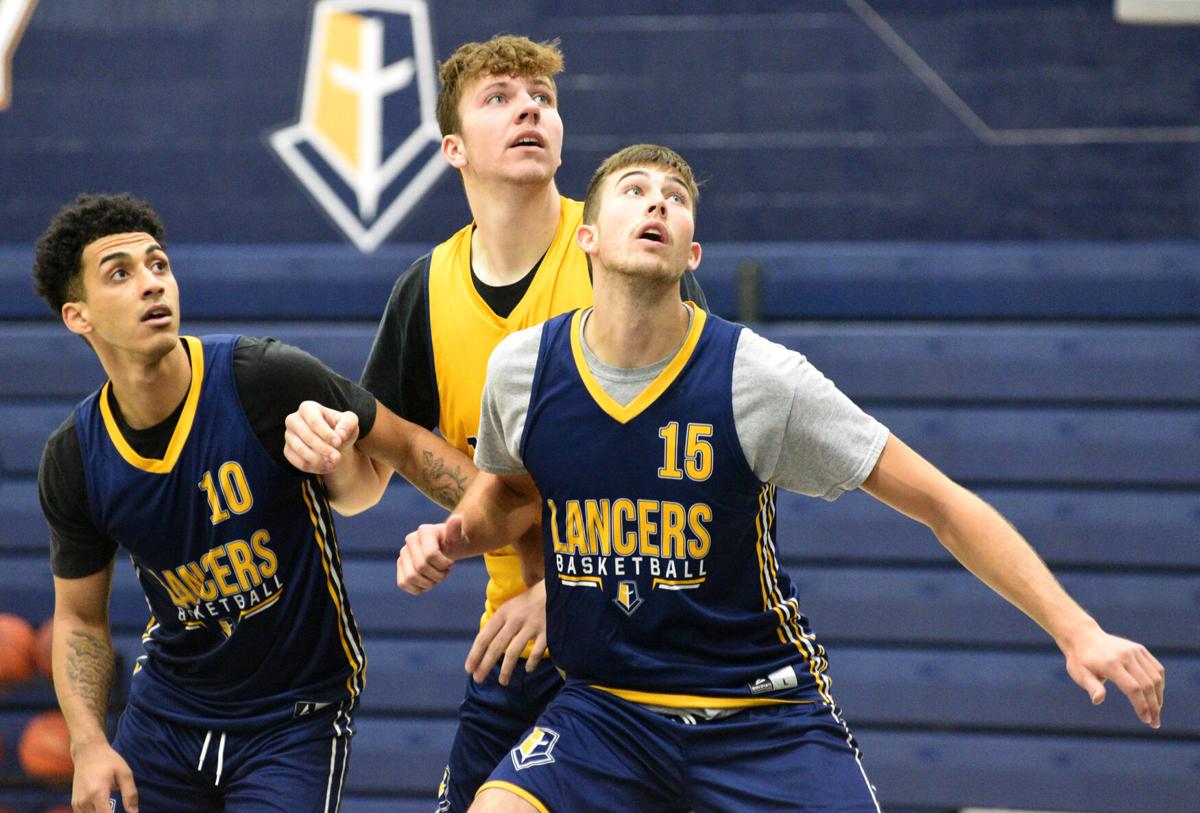 Chad Moran decides against going up for a dunk during a Mount Marty University men's basketball practice last Saturday at Cimpl Arena.

Chad Moran, 15, looks to go up for a shot against teammate Lincoln Jordre during a Mount Marty University men's basketball practice last Saturday at Cimpl Arena.

It was an attractive combination for Chad Moran, when he was deciding a year and a half ago where to land for his next college destination.

After two seasons at Southwestern Community College in his home state of Iowa, he decided on the University of Tampa, located in Tampa, Florida.

Moran — a 6-foot-4 explosive guard/forward from Honey Creek, Iowa — discovered, however, that it wasn’t the right fit. He never saw the floor last season (he redshirted) for the NCAA Division II program.

“The basketball side of things down there wasn’t quite what I wanted,” Moran added.

He then faced another dilemma: Where to next?

Why not reconnect with ‘Coach Lo?’

During his freshman season (2017-18) at Southwestern Community College, Moran had played for head coach Todd Lorensen. They had found success together. Moran had averaged 11.2 points and 4.6 rebounds per game for a team that won 29 games and finished third in the junior college ranks.

Moran then averaged 11.2 points and 4.7 rebounds as a sophomore, but Lorensen had departed after Moran’s freshman season to become head coach at Buena Vista University (Iowa). Lorensen was eventually hired to take the reins at Mount Marty University in Yankton prior to last season.

“I didn’t know where I wanted to go, but I knew he was a good coach, so I thought, ‘Why not team up with him and see what we can do?’” Moran said.

And so, after two seasons apart, Moran has teamed back up with Lorensen at Mount Marty.

Moran is a junior this season for the Lancers, who open the 2020-21 season Oct. 30 at home against Oak Hills Christian College at Cimpl Arena.

“I know how ‘Coach Lo’ runs his program, and how good of a coach he is, so I was excited to come back up here and play for him again,” Moran said.

In his debut campaign at Mount Marty last season, Lorensen guided the Lancers to a 20-12 record, which were more victories than the previous five seasons combined.

The success that Lorensen experienced in his first season at Mount Marty undoubtedly played a role in Moran’s decision, he freely admitted — “absolutely.”

“He is obviously doing something right if you can turn around a program that quickly,” Moran said.

“Quite frankly, it didn’t surprise me.”

Mount Marty found that level of success last season due in large part to the trio of Chris King, Jordan Johnson and Colby Johnson They were all seniors, however, which means the Lancers have some work to do to replace their production.

“They lost some big pieces, but we have a lot of new guys this year too,” Moran said. “We have to figure out our roles, but when we get it all figured out, we’ll be pretty good.”

The wins and losses will eventually come, but Moran said he has already enjoyed his time in Yankton and at Mount Marty.

Yankton is also a good fit because its proximity to Moran’s hometown, he said, which means his family can easily come watch him.

“They were able to come to almost every game when I was at Southwestern,” Moran said. “It’s nice to be close to home.”

Which is something he didn’t expect would happen a year ago at this time.

“I believe that everything happens for a reason,” Moran said.