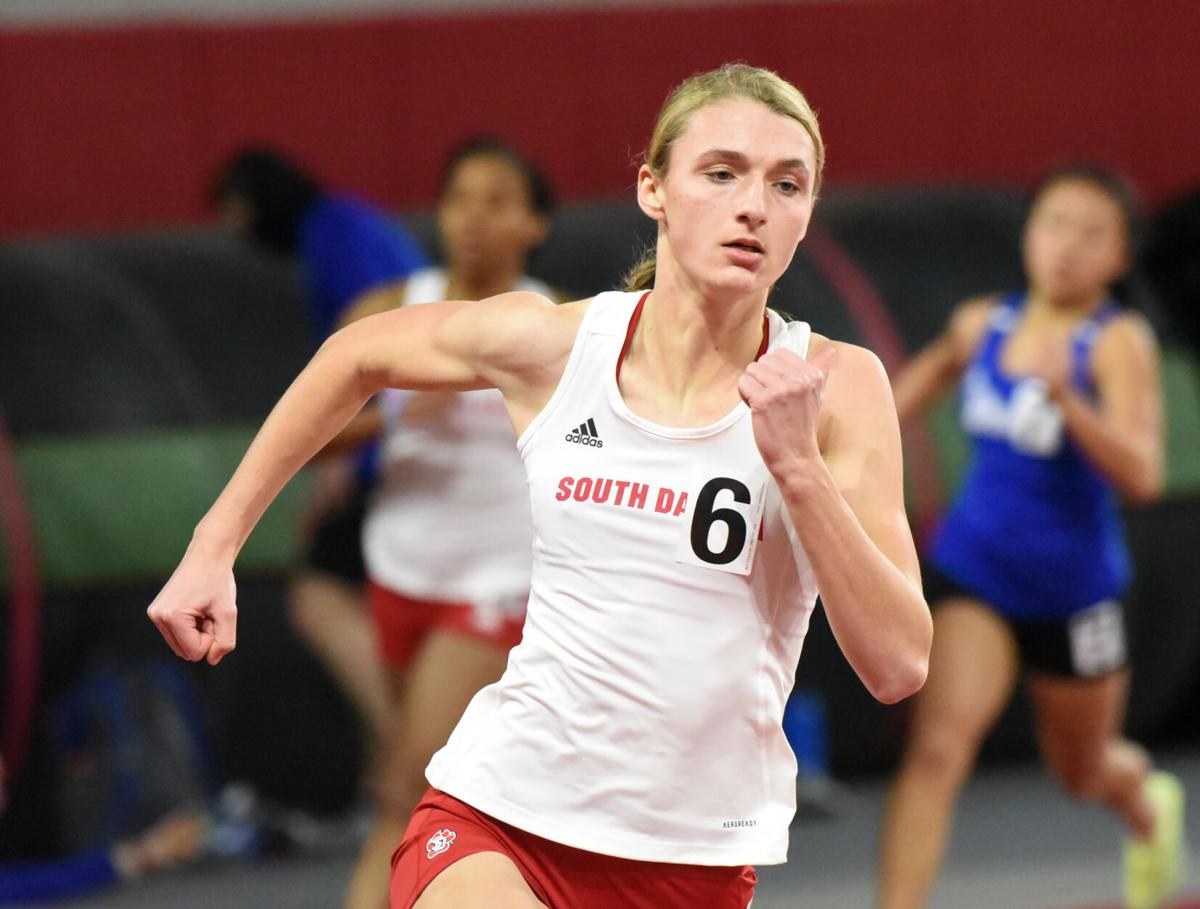 South Dakota's Sara Reifenrath leads the pack in the women's 400-meter dash at the USD Invitational meet earlier this season at the DakotaDome. The Hartington (Nebraska) Cedar Catholic graduate won the event in 56.64. 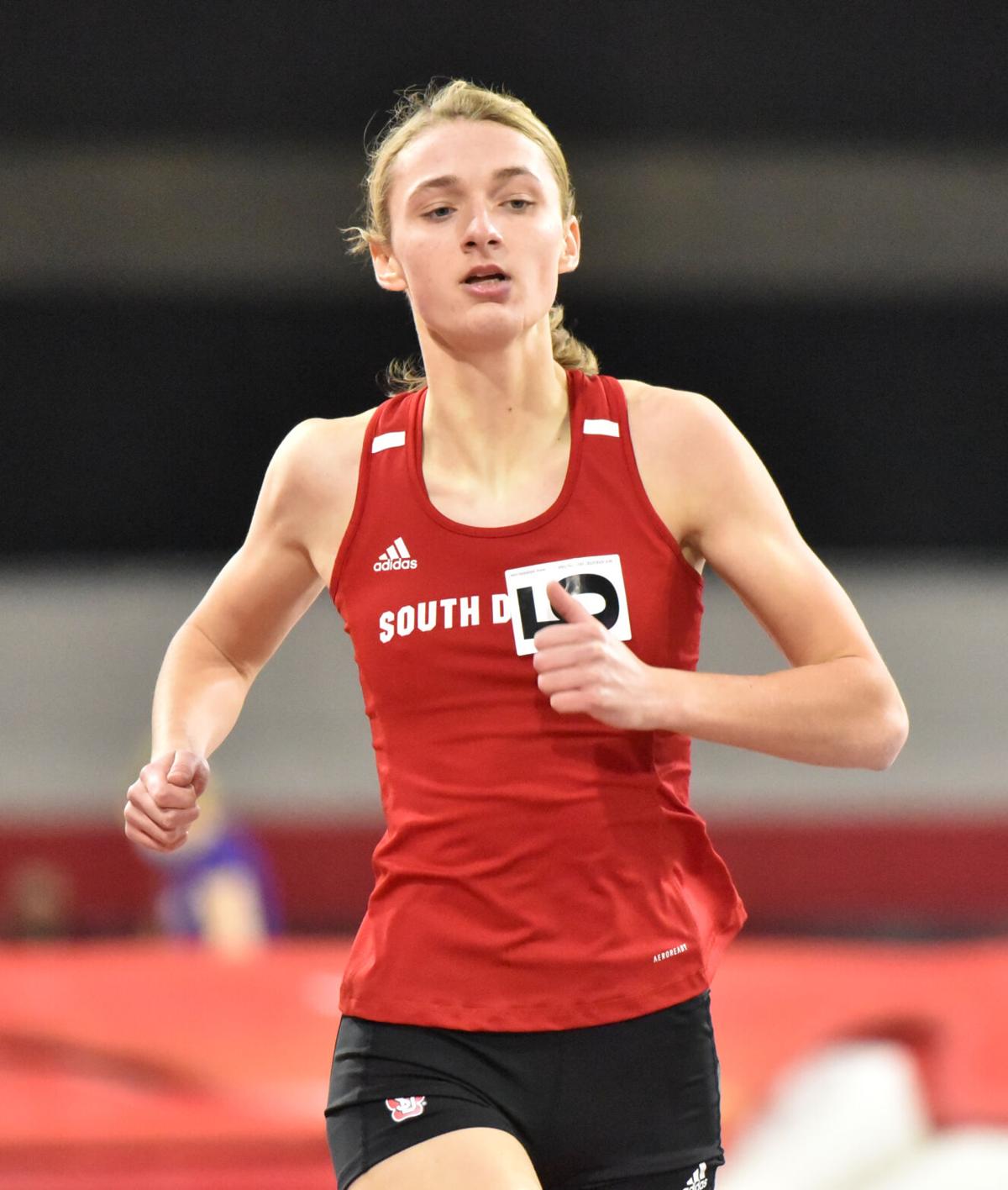 South Dakota's Sara Reifenrath crosses the finish line in first place in the women's 400-meter dash at the Dakota Realty Invitational earlier this season at the DakotaDome.

South Dakota's Sara Reifenrath leads the pack in the women's 400-meter dash at the USD Invitational meet earlier this season at the DakotaDome. The Hartington (Nebraska) Cedar Catholic graduate won the event in 56.64.

South Dakota's Sara Reifenrath crosses the finish line in first place in the women's 400-meter dash at the Dakota Realty Invitational earlier this season at the DakotaDome.

VERMILLION — With so much seemingly thrown at her over the past year, because of the pandemic and then heading off to college, what has the journey been like for Sara Reifenrath?

“It’s definitely a little surreal,” Reifenrath, a freshman at the University of South Dakota, said Thursday.

“In a way, high school just ended super suddenly, so it almost feels like I’m still kind of a high school student. It’s been weird, but it’s definitely been a lot of fun.”

She’s definitely not in high school at Cedar Catholic in Hartington, Nebraska, anymore, though.

No, she’s well on her way to a stellar track career for a Division I university.

Reifenrath has burst onto the Coyote scene by setting school indoor records in the 200-meter dash and 400-meter dash this season, and she leads the Summit League in both events heading into this weekend’s conference indoor meet in Brookings.

For everything she’s dealt with by simply being a freshman in college, Reifenrath seems to have adjusted well to life in Vermillion.

“It feels more competitive, but at the same time, it feels like similar to what I did in high school,” Reifenrath said.

“It’s a perfect blend of that, where I’m obviously getting better, but I still feel comfortable with my coaches and my teammates,” she added.

Reifenrath came to USD after a standout career at Cedar Catholic, where she won three Nebraska state track championships. She certainly had opportunities to run at a number of schools, but Reifenrath said she had always thought about attending USD.

“My aunt went here, and my sister (Anna) is here, so it was definitely one of my top options,” said Reifenrath, who is pursuing a computer science major.

“When I went here, it just felt familiar, even though I had never really been on campus that much. It felt like I could see myself being at home here.”

As much as the transition to college presented adjustments, Reifenrath maintained that she was confident in her abilities upon joining USD’s track program.

“I might not be the best on the team right away, but I thought I could definitely have a spot on the team,” she said. “I just wanted to come in and work hard.”

She wasted little time making a name for herself.

Reifenrath has clocked season best of 23.71 in the 200-meter dash and 54.33 in the 400-meter dash, and was also the anchor leg on USD’s league-leading 1600-meter relay quartet (3:47.11). She has earned Summit League Women’s Track Athlete of the Week honors three times this season.

As quickly as she has become one of the conference’s top women’s athletes, it wasn’t as though there was a specific moment where Reifenrath felt like she knew she could compete at the Division I level, she said.

“I just noticed at practice that I could keep up with some of the upperclassmen,” Reifenrath said. “It was exciting to see that I was getting better an athlete.”

All of Reifenrath’s work and progressions throughout the season will culminate in this weekend’s Summit League indoor meet.

“It’s definitely exciting, because didn’t really know for the longest time if we were going to have a season; if our training was going to pay off, but now it is,” she said.

“I’m super excited to see what times I can run with the best of the competition and to see how our team does.”

The USD women also come into the meet with the top-four qualifying marks in the pole vault, led by Gennifer Hirata (14-1.25). Additionally, Carly Haring ranks first in the high jump (5-10.75) and Holly Gerberding leads in the pentathlon (3739).

On the men’s side, USD will enter the Summit League indoor meet with the top time or mark in six events. The Coyotes boast the top-three qualifying marks in the high jump, led by Jack Durst (7-0.5).