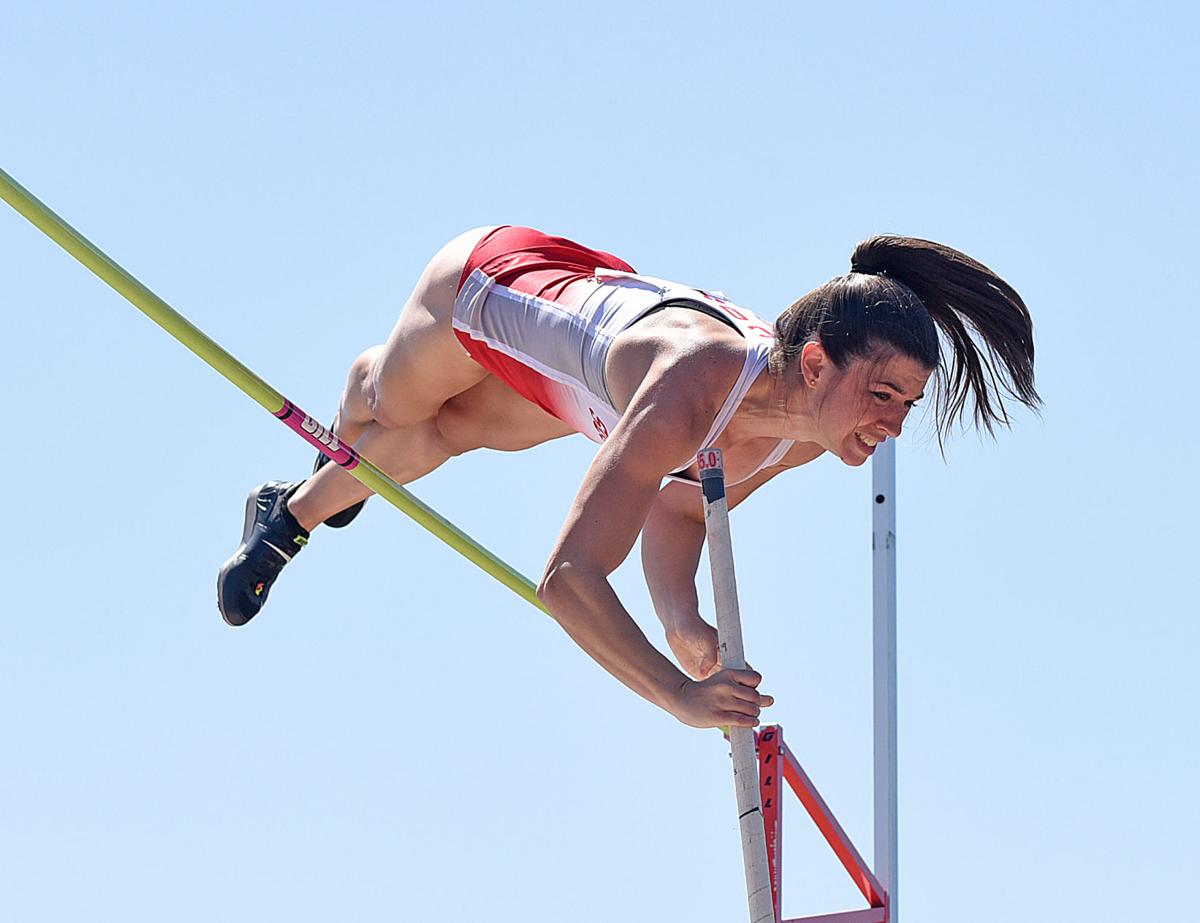 South Dakota’s Helen Falda tries to clear the bar at 14 feet, 1 3/4 inches during the 2019 Howard Wood Dakota Relays in Sioux Falls. Falda, a senior from Italy, is coping not only with the interruption to her training routine, but seeing what her family back home is facing due to COVID-19. 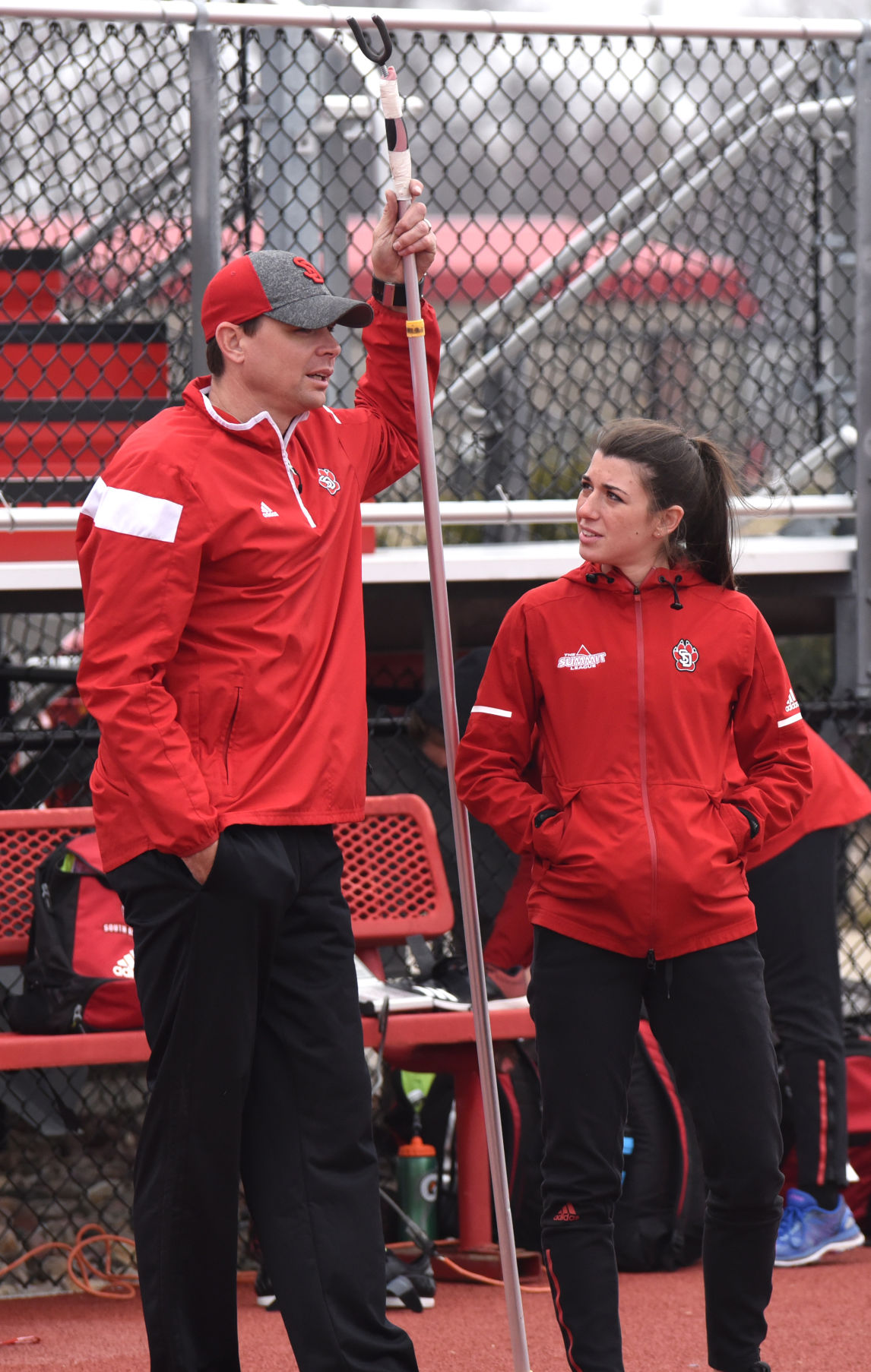 South Dakota pole vault coach Derek Miles, left, talks with Helen Falda during the 2019 South Dakota Invite in Vermillion. Falda hopes to return to training in the near future.

South Dakota’s Helen Falda tries to clear the bar at 14 feet, 1 3/4 inches during the 2019 Howard Wood Dakota Relays in Sioux Falls. Falda, a senior from Italy, is coping not only with the interruption to her training routine, but seeing what her family back home is facing due to COVID-19.

South Dakota pole vault coach Derek Miles, left, talks with Helen Falda during the 2019 South Dakota Invite in Vermillion. Falda hopes to return to training in the near future.

Helen Falda would much rather be with her family, but given where they are, she realizes it’s probably best she remains on the other side of the globe.

They’re quarantined in their homes in the wake of the COVID-19 pandemic, which has already killed more than 6,000 people in Falda’s native country.

Falda, a senior pole vaulter at the University of South Dakota, said this week that she keeps in daily contact with her family — everyone is safe.

“I’m in a better situation, but I’m still worried,” Falda said Tuesday afternoon by phone from Texas, where she is staying with her boyfriend.

The South Dakota Board of Regents announced Tuesday that the state’s universities have moved the rest of the semester online, and Falda and her fellow USD athletes already had their spring seasons canceled.

Without an option to continue her pole vault training in Vermillion, Falda decided to drive down to Texas (a 14-hour drive, rather than a flight) to stay with her boyfriend who has his own pole vault facility.

Falda was one of five USD athletes who traveled to New Mexico two weeks ago for the NCAA Division I Indoor Track & Field Championships. That meet was canceled, but by that point, Falda said she knew it was likely only a matter of time before the coronavirus impacted life in the United States.

“I was living for a few weeks with this weight on my chest that it was going to happen here, because I knew it was already in Italy,” she said.

“All we could do was prepare and be smart.”

It’s the same thing her family has done over in Italy, according to Falda.

The town — with 20,000 residents — where her part of her family lives has been divided into five areas, and the residents in each segment are designated one day a week to venture outside to get groceries, Falda said.

It’s a scary situation for everyone involved, isn’t it?

“It really is,” Falda said. “But it’s been almost a month now, so I’ve gotten used to it.

The knowledge that her mother works as a nurse in the healthcare field, however, really brings that fear home, according to Falda.

Her mother, Elina, is a nurse and does not deal with COVID-19 patients yet, Falda said, but there’s a strong likelihood that could change.

“They will probably move her soon, because they need more people,” Falda said.

Falda said she hopes to return to South Dakota at the end of this week to continue her pole vault work, in addition to her online courses.

The plan, she said, would be for a small group of vaulters (maybe 1-2 at a time) to compete at a time.

“Track, especially pole vault, is not a sport of contact,” Falda said.

In the meantime, she faces the proposition of not being able to travel to Italy to visit her family for some time — she hopes to this summer.

“That’s what worries me the most. If I wanted to go home, I couldn’t,” Falda said. “I’m on the other side of the world.”

At the same time, she knows her family members will make smart decisions — won’t venture outside when they shouldn’t — and will do everything they can to remain safe, she said.

As much as she’d like to be there, where Falda is now is the best option, she added.

All she can do is keep in regular contact with her family and hope for the best, she added.

“Everything will go back to normal again sometime, but hopefully soon,” Falda said.