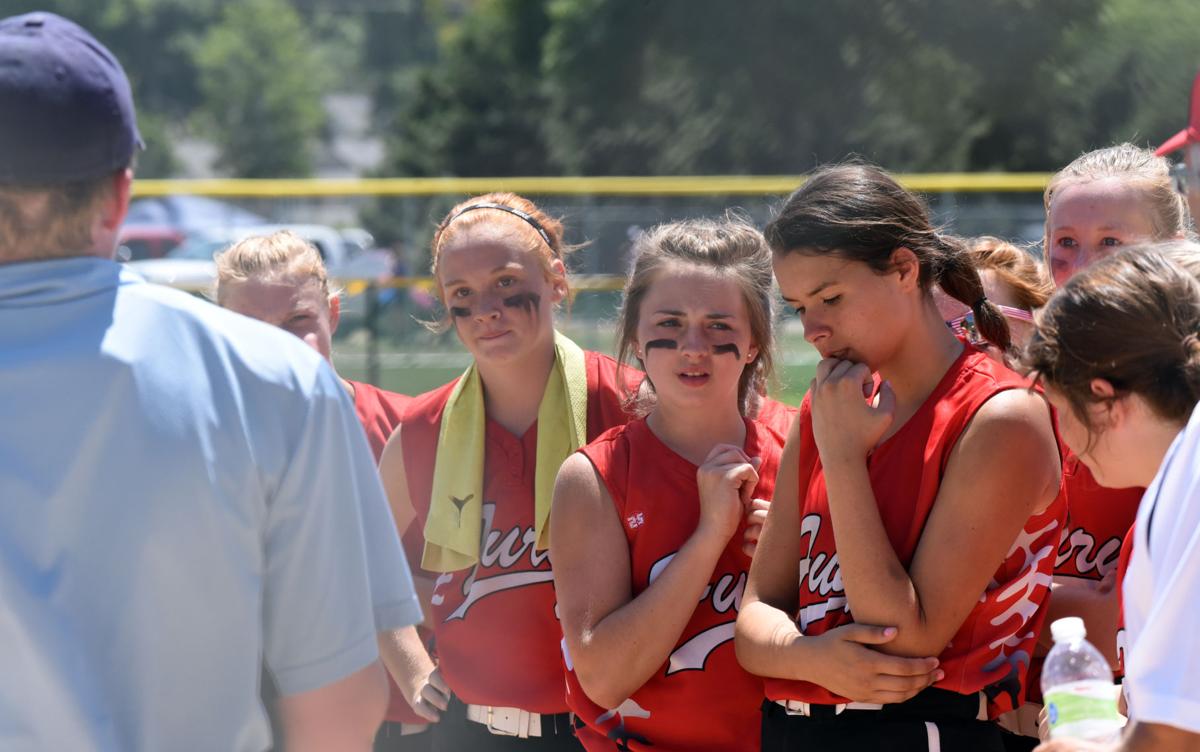 Yankton Fury 14s players listen to the umpires give final instructions prior to their game with the Brandon Valley Rage in the South Dakota ASA State Fastpitch Tournament, Saturday at Sherman Park in Sioux Falls. 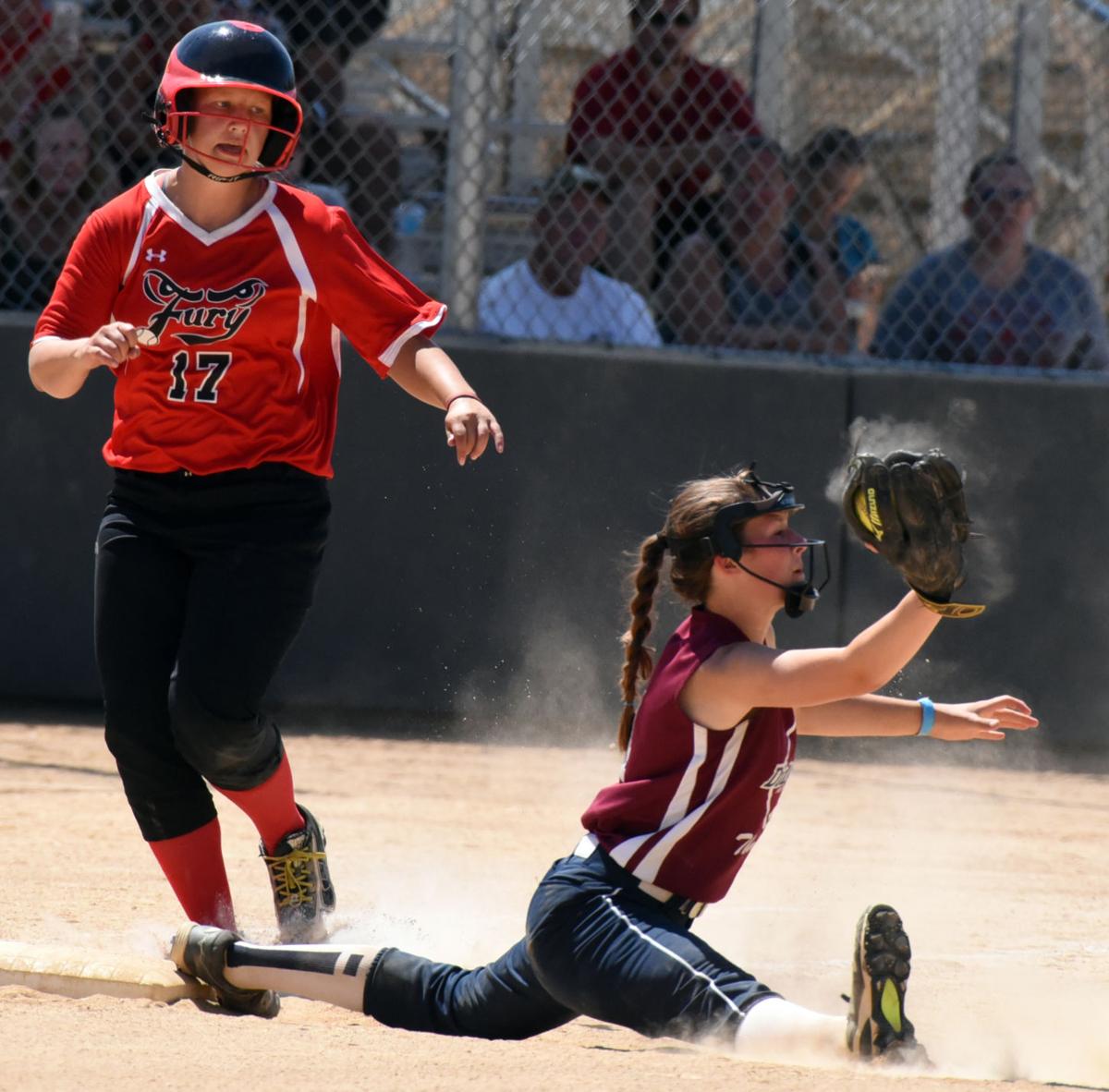 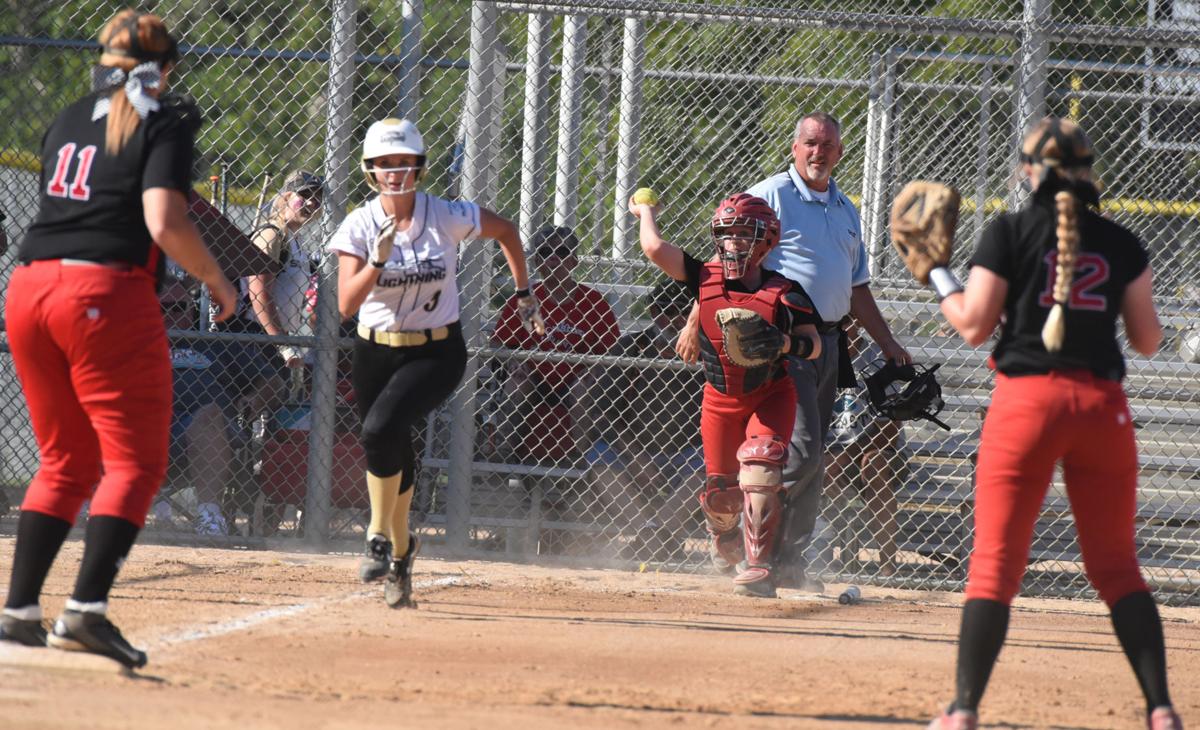 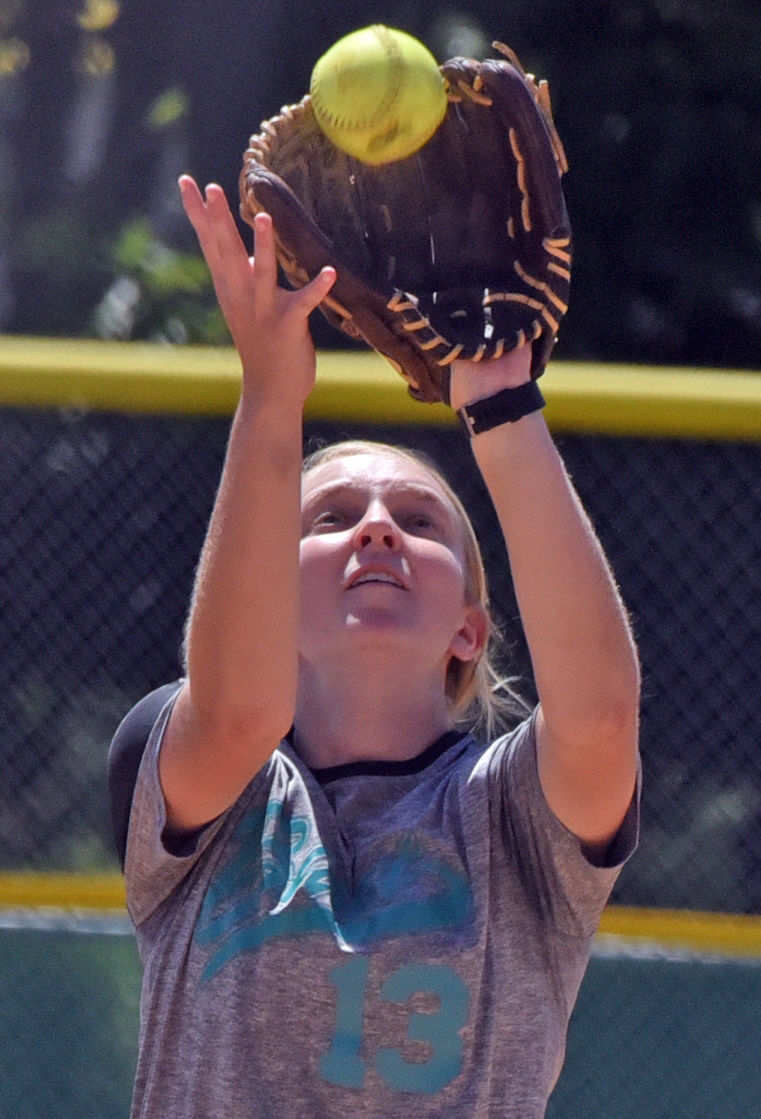 Vermillion Blast infielder MaKenna Koble catches a popup during her team's matchup with the Arrows in the South Dakota ASA State Fastpitch Tournament, Saturday at Sherman Park in Sioux Falls.

Yankton Fury 14s players listen to the umpires give final instructions prior to their game with the Brandon Valley Rage in the South Dakota ASA State Fastpitch Tournament, Saturday at Sherman Park in Sioux Falls.

Vermillion Blast infielder MaKenna Koble catches a popup during her team's matchup with the Arrows in the South Dakota ASA State Fastpitch Tournament, Saturday at Sherman Park in Sioux Falls.

In the ‘B’ division, the Yankton Fury Xtreme finished third, dropping a 4-3 decision to the Midwest Lightning on Sunday. The Lightning also handed the Fury Xtreme their other tournament setback, a 9-5 decision on Saturday.

In the ‘C’ division, Tabor dropped an 8-1 decision to Pierre in the championship. The Lady Bluebirds forced a second final with an 8-5 victory earlier in the day.

Tabor advanced to the final with a 9-0 victory over Platte, as Platte finished in third place.

Midwest Lightning overcame a 10-6 deficit in hits to eliminate Yankton.

Hannah Matthies went 3-3 with two RBI, and Alix Peterka had two hits to lead Yankton. Megan McCorkell doubled, and Bailey Peterka, Traia Hubbard, Taylor Bauder and Lexie McCorkell each had a hit in the effort.

The Fury Xtreme used a seven-run fifth inning to stay alive on Sunday.

Six different Yankton players had two hits each, led by a triple and single by Alix Peterka. Lexie McCorkell, Hannah Mattheis and Traia Hubbard each doubled and singled, with Hubbard driving in a team-best three runs. Jill Orwig and Taylor Bauder each had two hits. Megan McCorkell had the other Yankton hit.

Orwig picked up the win, striking out five.

Yankton scored seven runs in the first to pull away from the Marauders on Saturday.

Midwest Lightning jumped out to a 6-0 lead and held on for a 9-5 victory over the Fury Xtreme, handing Yankton its first setback of the tourney.

Hannah Mattheis went 3-3 with two home runs and a double to lead Yankton. Lexie McCorkell had a pair of hits. Traia Hubbard and Britney Davis each had a hit.

Jill Orwig took the loss, striking out four in four innings of work.

The Vermillion Flamez fell to the Diamonds Fury 8-0 in the ‘B’ final. The Flamez won twice Sunday by a combined 22-4 to advance to the title game.

Vermillion was held to three hits as Diamond Fury clinched the ‘B’ title on Sunday.

Kailee Brinkman, Emma Brinkman and Sydni Hughes each had a hit for Vermillion. Emily Stockwell took the loss, allowing one earned run and striking out four.

Brinkman went 2-2 with a home run and a double, and Alisa Leber doubled and singled for Vermillion. Emily Stockwell, Bizzy Wood, Kailee Brinkman, Sydni Hughes, Brooke Assmus and Sydney Stockwell each had a hit in the victory.

Stockwell picked up the win, allowing two hits in the three-inning contest.

Elsie Marquardt, Rachel Hamburg and Olivia Hummel each doubled and singled for Yankton. Marquardt had three RBI and three runs scored, Hamburg had a RBI and a run scored, and Hummel scored twice in the effort.

Chloe Koletzky also had two hits. Olivia Larson had a hit and two runs scored. Trinity Fitch drove in three runs, Taryn Bailey drove in a run and Kayli Jelsma scored a run for the Fury.

Vermillion used big innings in the second and fourth innings to pull away from the Storm.

Kailee Brinkman and Sydni Hughes each doubled and singled to lead the Flamez. Emily Stockwell, Bizzy Wood and Brooke Assmus each had two hits. Payton Vellek tripled and Sydney Stockwell had a hit in the effort.

Emily Stockwell picked up the win, striking out three.

The Yankton Fury 14s lost both games Saturday to be eliminated. The teams that beat the Fury — the Brandon Rage and the Venom — faced off in the ‘B’ division championship.

Dakota Valley lost to Roy’s Force in the ‘C’ final, 4-3. The Panthers advanced to the final with an 8-3 victory over Scotland, as Scotland finished third.

Joslyn Walloch and Lainie Keller each had a hit for Yankton as the Fury were eliminated.

Lexi Madson had a hit and a run scored for Yankton as the Fury suffered their first setback. Joslyn Walloch and Addison Binde each had a hit. Larkyn Mason scored a run in the effort.

Yankton’s Haley Lande drove in the game’s only run for a walkoff win over the Rapid City Storm on Friday night.

Lainie Keller, Addison Bindi and Lexi Madson each had a hit in the win.

Madson picked up the win, striking out eight.

Lexi Madson and Lainie Keller each doubled and singled, with Madson scoring a run, as the Yankton Fury opened state tournament play with a rout of the Madison Rage on Friday afternoon.

Emma Sedlacek, Carley LaFrentz and Larkyn Mason each had a hit and a run scored for Yankton. Haley Lande and Addison Binde each had a hit. Joslyn Walloch and Paige Gullikson each scored in the win.

Madson struck out two in picking up the win.

The Yankton River Bandits dropped an 8-1 decision to Sioux Falls Diamonds Storm in the ‘A’ final. The River Bandits beat the Tigers 9-1 and the Brandon Valley Outlaws 11-9 to advance to the title game.

The Yankton Fury Black went 1-1 on Saturday and were eliminated.

In the ‘C’ division, Dakota Valley was the only team in the 2017 tournament to win the final after coming through the loser’s bracket, beating the Royals 9-1 in the ‘if’ game. Dakota Valley forced a second championship game with a 4-1 decision.

Ellie Karolevitz, Emma Yost, Hannah Sailer, Addison Sedlacek and Grace Behrns each had a hit for Yankton. Karolevitz and Behrns pitched in the effort.

The Sioux Falls Fusion jumped out to a 5-0 lead and held on for a 12-5 victory, leaving Yankton in third.

Paige Hatch doubled and singled, driving in two, and Regan Garry and Tori Vellek had two hits each to lead Yankton. Britta Pietila had the other Yankton hit.

Elle Feser had a double, a single, three RBI and two runs scored as Yankton edged Brandon Valley to advance to the final.

Emma Yost and Hannah Sailer also doubled and singled with a run scored, with Yost also driving in three runs. Ellie Karolevitz had a double and three runs scored.

Also for Yankton, Jill Eidsness, Addison Sedlacek, Grace Behrns, Thea Chance and Nora Welker each had a hit. Behrns drove in two runs, Eidsness scored twice, Sedlacek had a run scored and a RBI, and Chance scored in the effort.

Behrns picked up the win, striking out five.

Brookings used a pair of six-run innings to pull away from the Fury Red.

Addison Sedlacek had two doubles and a RBI as Yankton opened Sunday’s action with a win, avenging a loss to the Tigers.

Emma Yost had two hits, and Jillian Eidsness, Thea Chance and Grace Behrns each had a hit. Eidsness scored twice, Chance had a RBI and a run scored and Behrns scored in the win.

Karolevitz picked up the win, striking out five.

Yankton dropped into the loser’s bracket after a close loss to Harrisburg on Saturday.

Grace Behrns struck out nine to pick up the win as Yankton earned an opening victory.

Yankton rallied from an early 5-1 deficit to claim a 9-7 victory on Saturday.

Tori Vellek had a double, a single and three RBI to lead Yankton. Paige Hatch had two hits and four RBI. Brooklyn Townsend also had two hits. Camryn Zoeller doubled, and Grace Brockberg, Regan Garry, Annika Gordon and Britta Pietila each had a hit in the effort.

Gordon picked up the win, striking out five.

The Yankton Fury Hornets dropped an 11-10 decision to the Hartford Hotshots in the ‘B’ final. The Hornets, who lost 10-5 to Hartford earlier in the day, beat Brookings Red 13-10 to advance to the final.

In the ‘C’ division, Dakota Valley beat Lennox 15-4 for the title. The Yankton Fury Twisters won three straight games Saturday before falling in Saturday’s final game to be eliminated.

Yankton had seven hits in the final, including a double, two singles and a run scored for Kenadee Kozak. Mia Donner doubled and singled, scoring three times. Aubrie Lloyd had a double and a run scored. Quincy Gaskins also had a hit and a run scored. Madison Girard scored twice, and Olivia Binde and Isabella Maldonado each had a hit in the effort.

Kenadee Kozak and Taylor Hamburg each had three hits to lead Yankton.

Kozak picked up the win, striking out six.

Yankton pounded out five doubles on the way to a victory over Harrisburg on Saturday.

Also for Yankton, Tori Hanson had a hit and a run scored. Taylor Hamburg, Isabella Maldonado and Aubrie Lloyd each scored a run in the win.