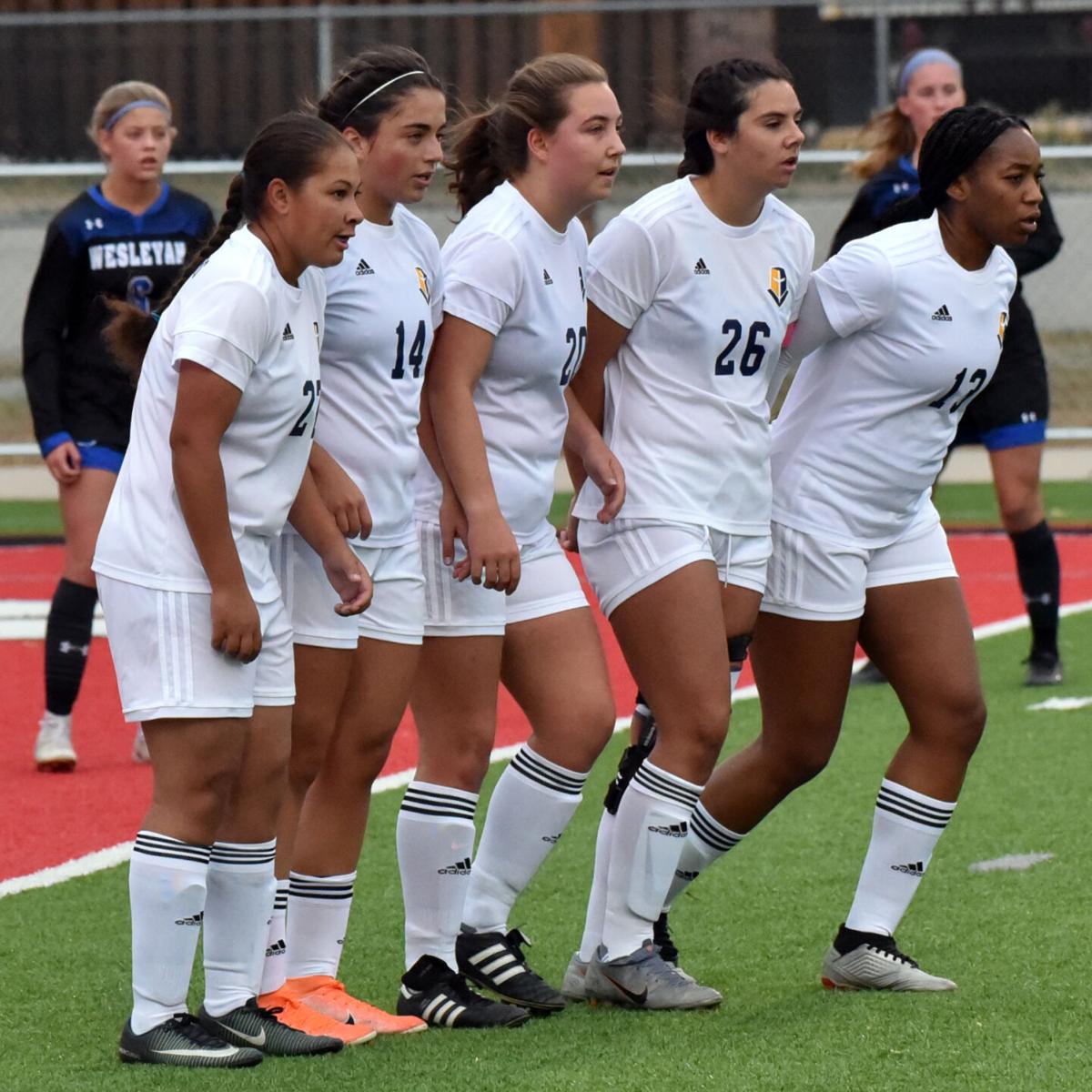 Mount Marty's Taylor Dunn, 26, stands in the wall with teammates Claire Buhr (27), Tuenedi Villicana (14), Becky Wilkins (20) and Kenyonique Thompson (13) on a Dakota Wesleyan free kick during their Great Plains Athletic Conference women's soccer match on Wednesday at Crane-Youngworth Field. Dunn scored both goals for the Lancers in a 6-2 setback. 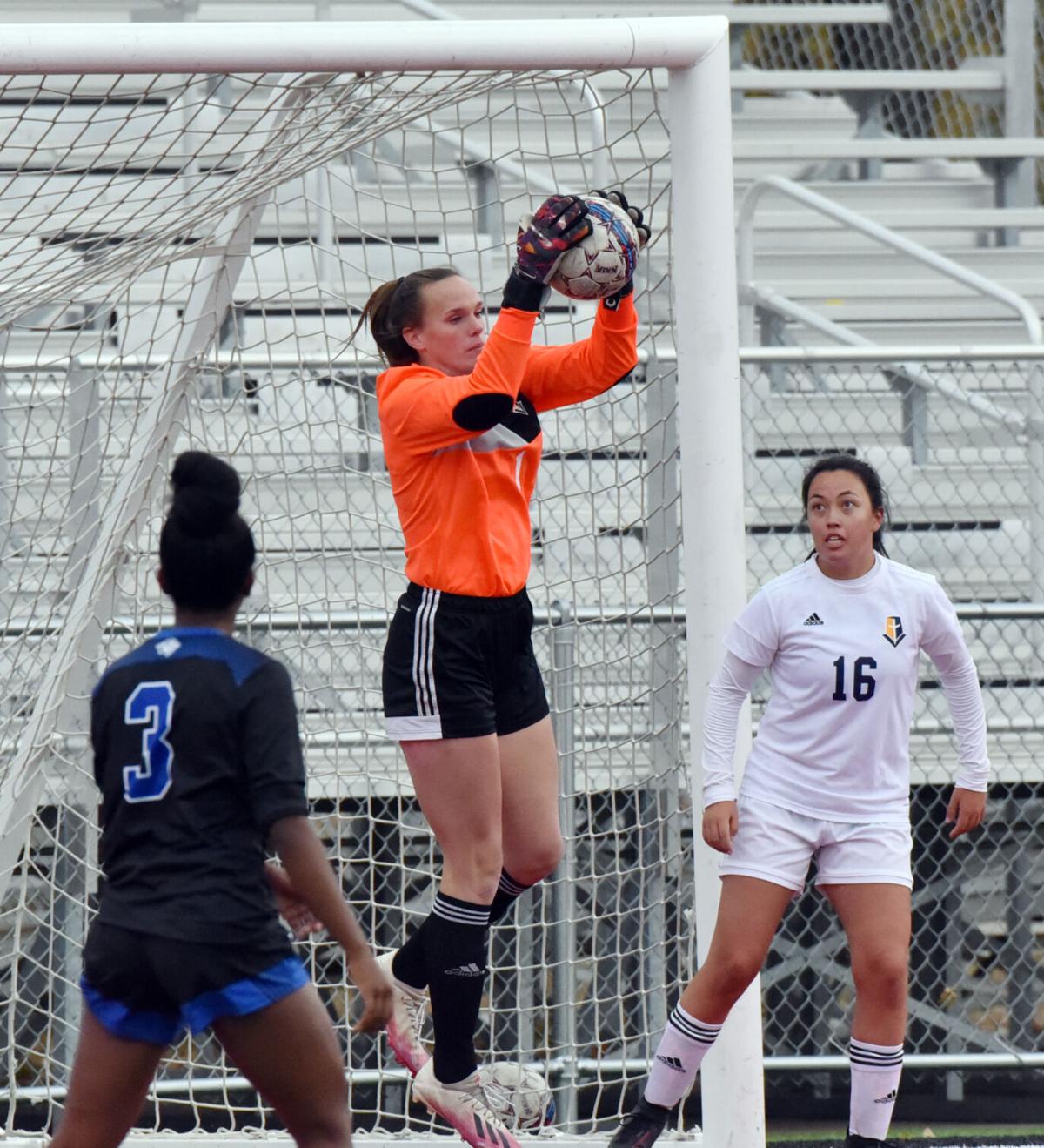 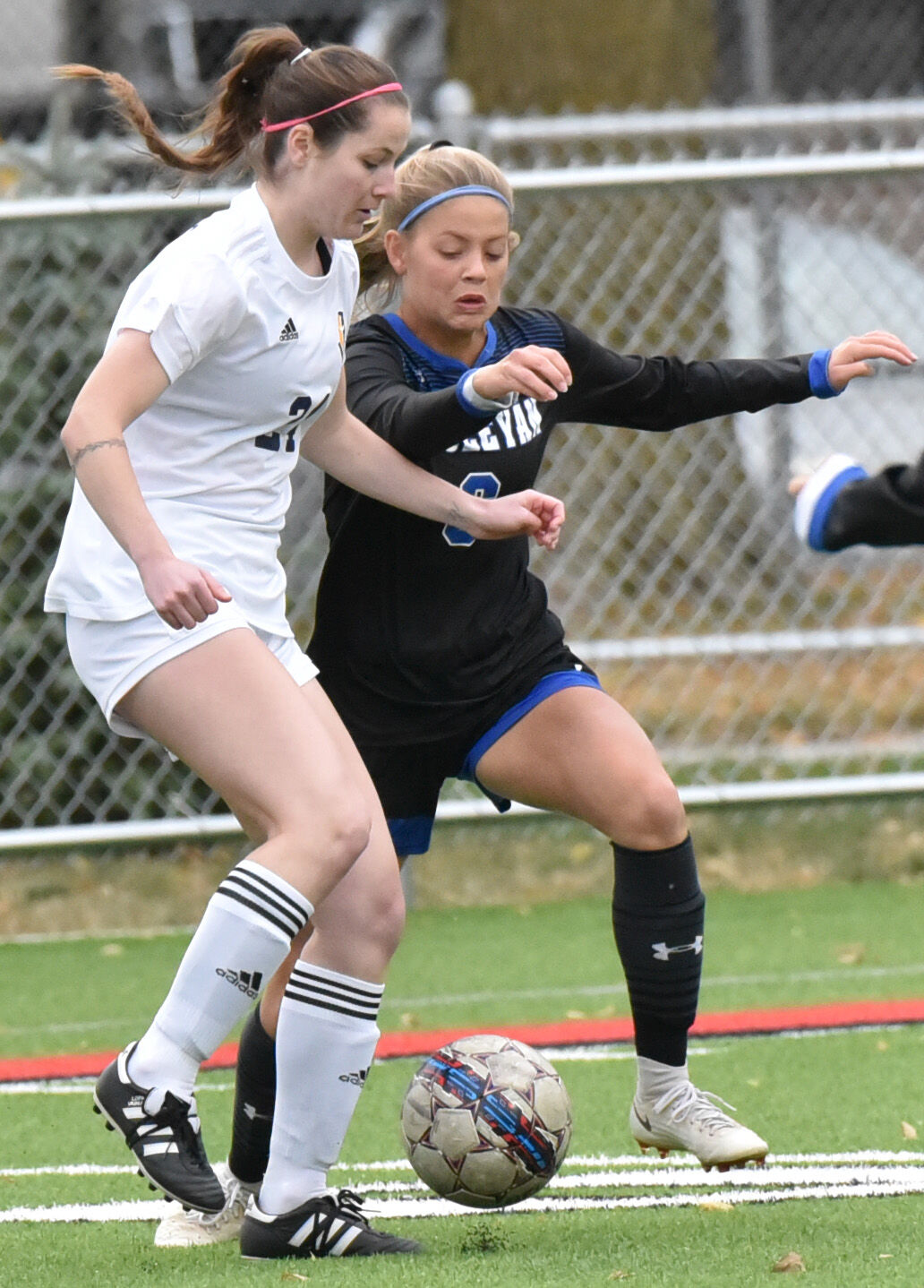 Mount Marty's Torrye Provencher tries to get around the defense of Dakota Wesleyan's Kassidy Johnson during their Great Plains Athletic Conference women's soccer matchup on Wednesday at Crane-Youngworth Field. 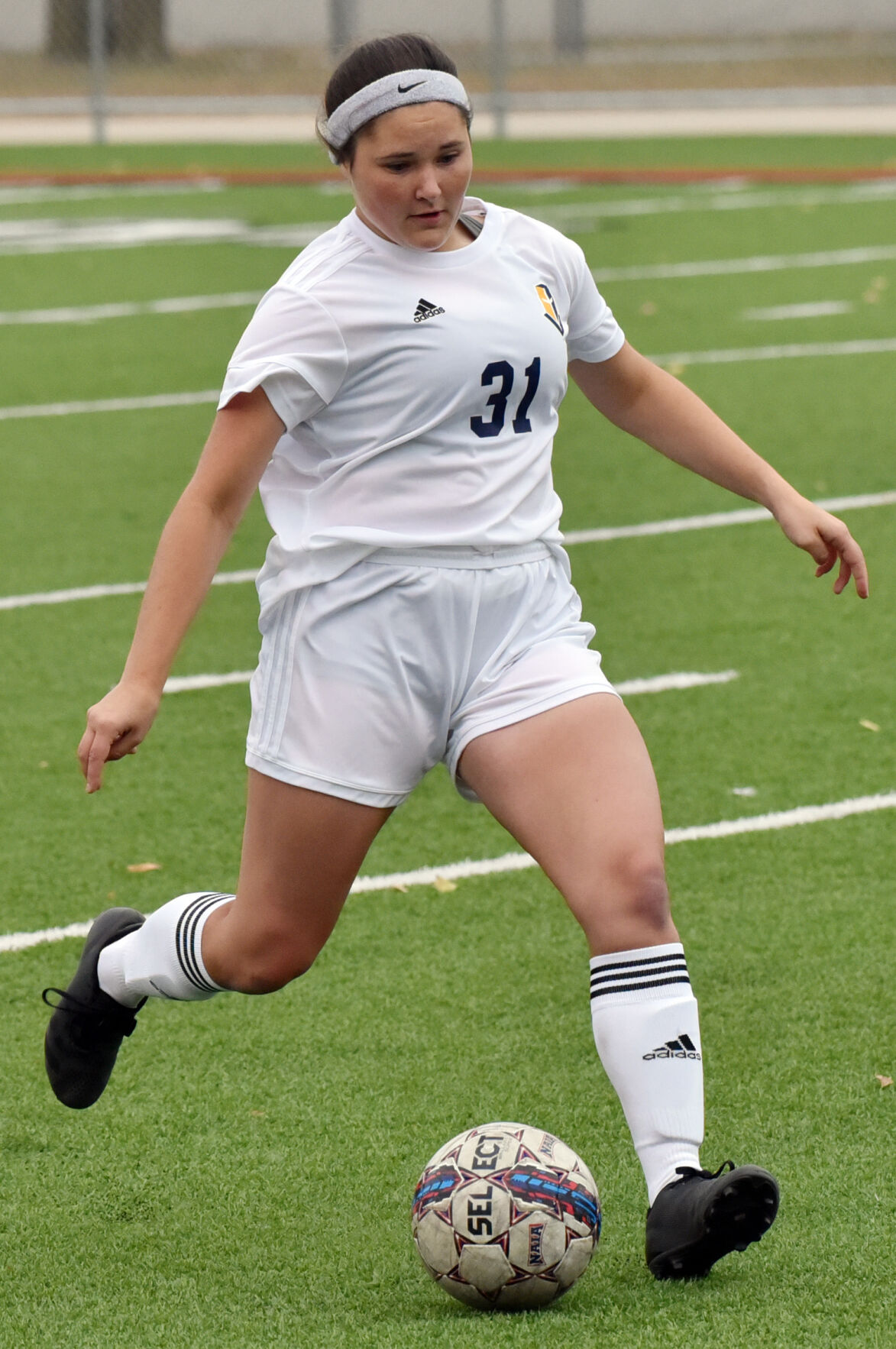 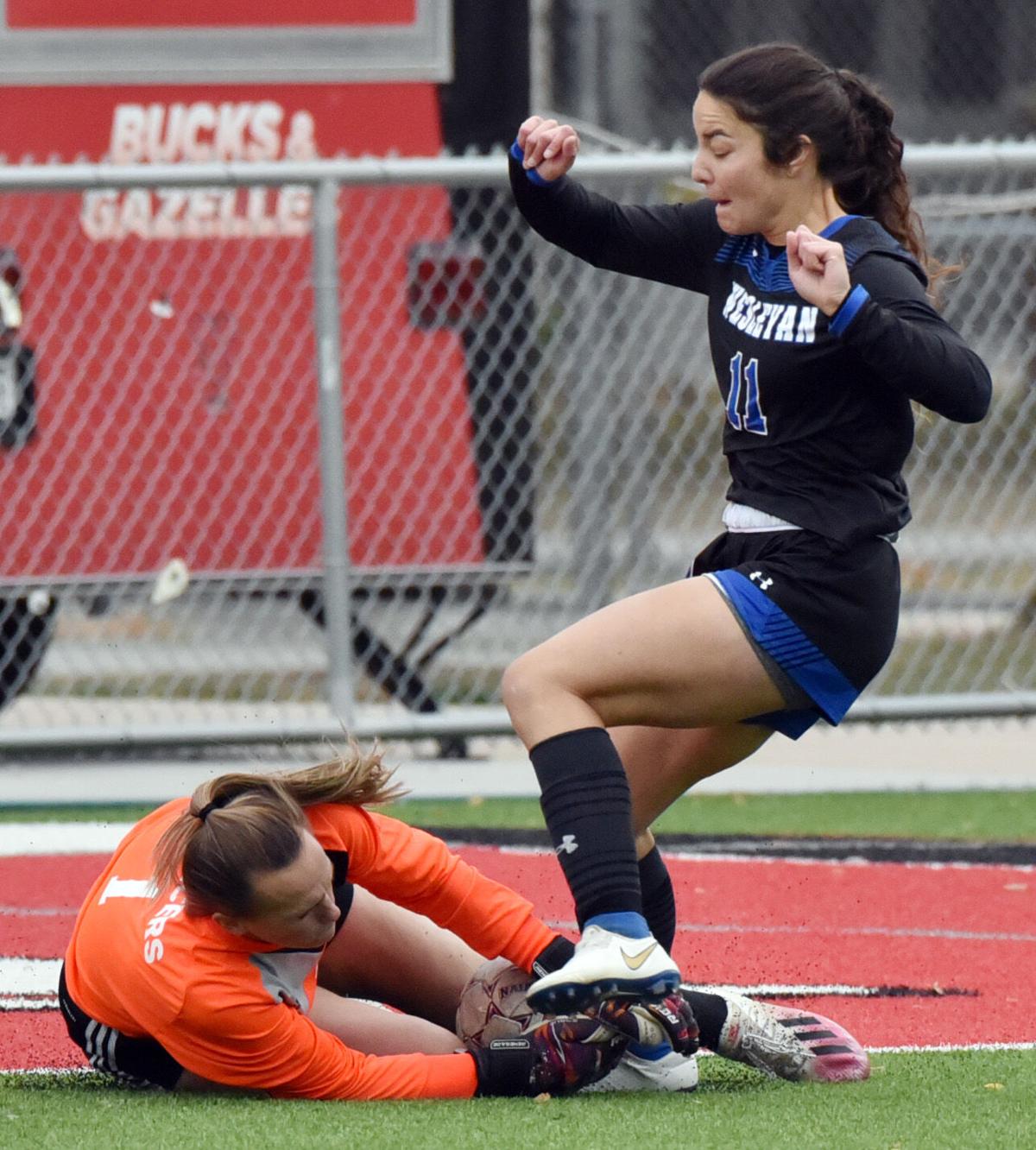 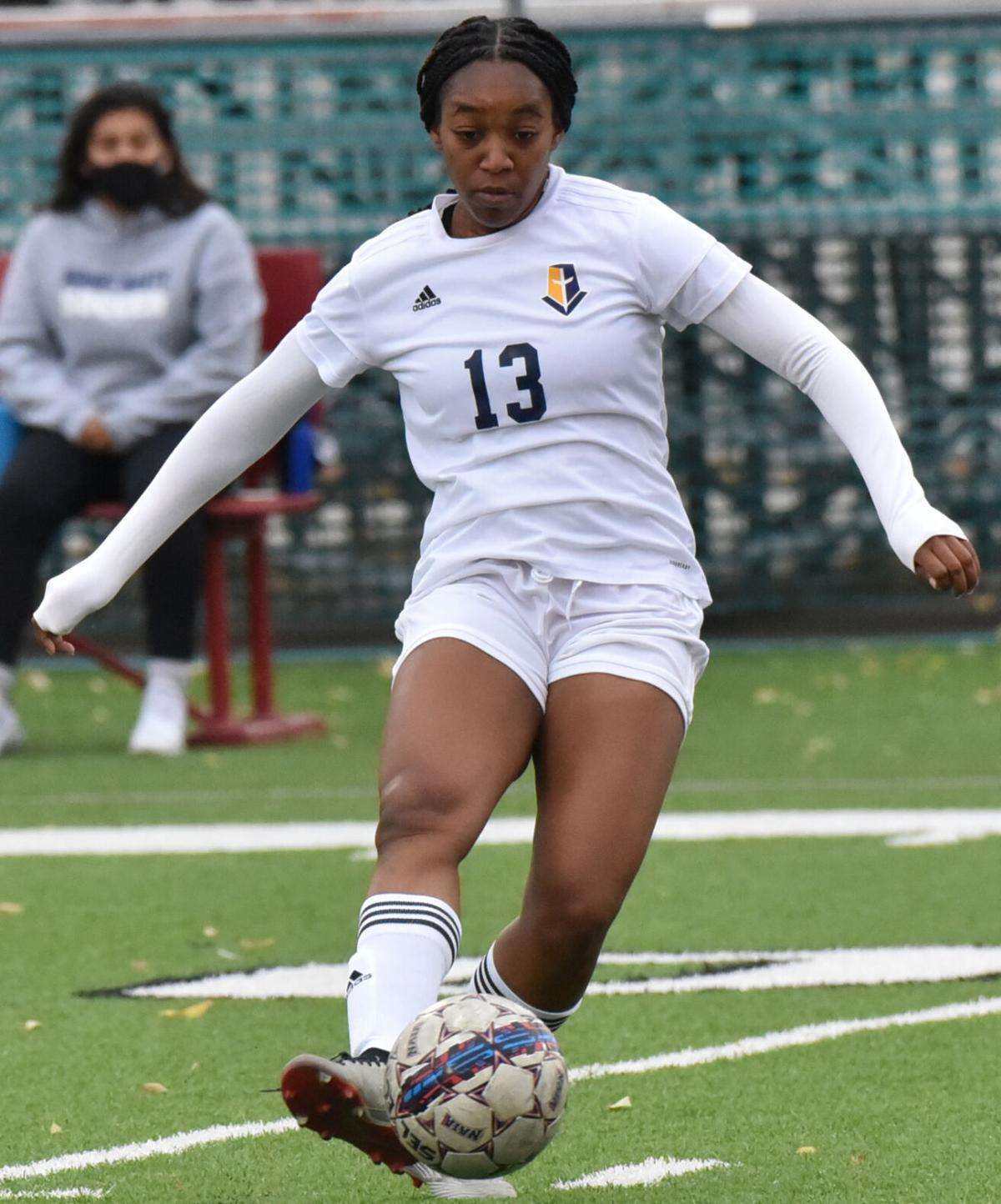 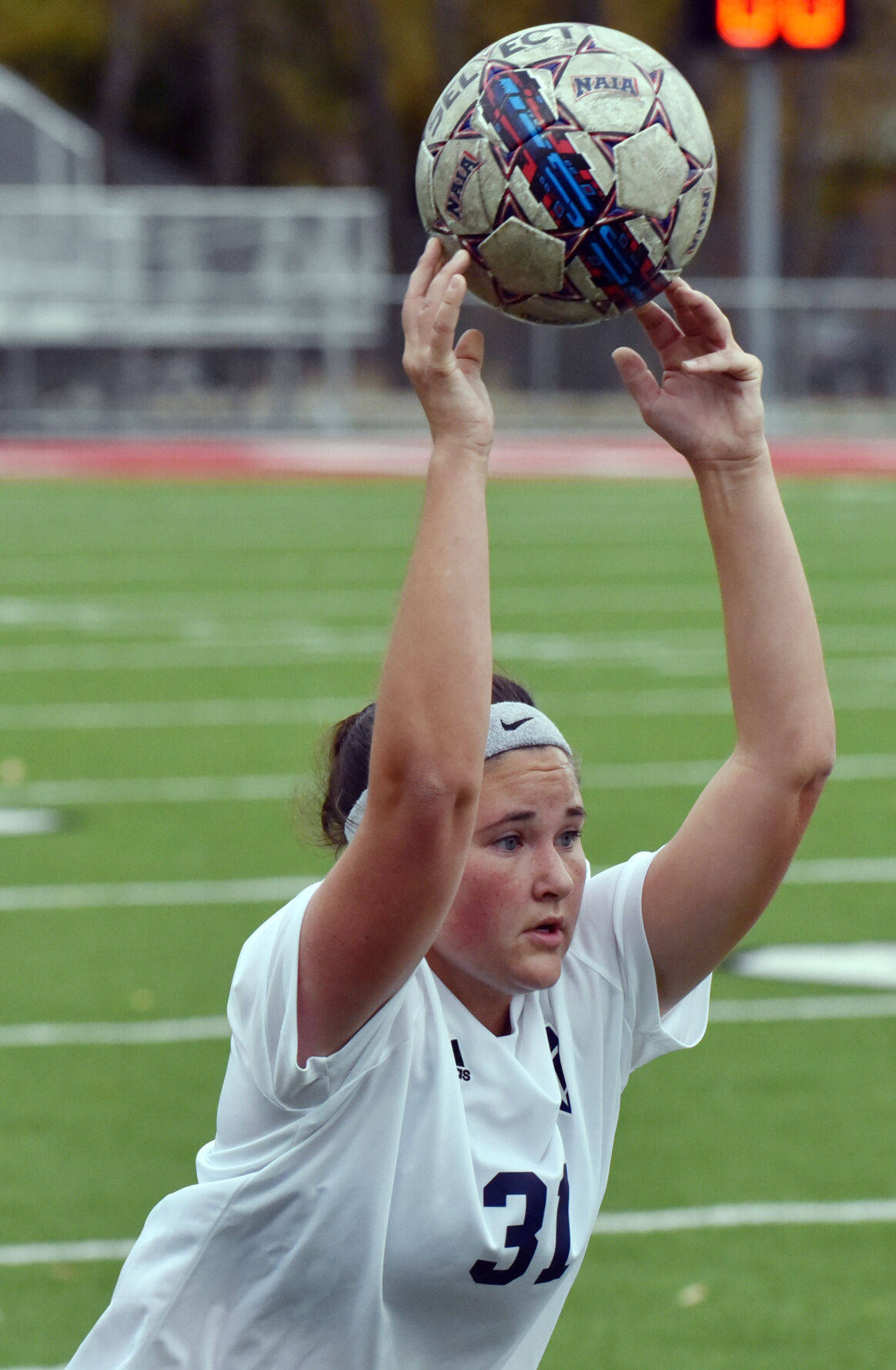 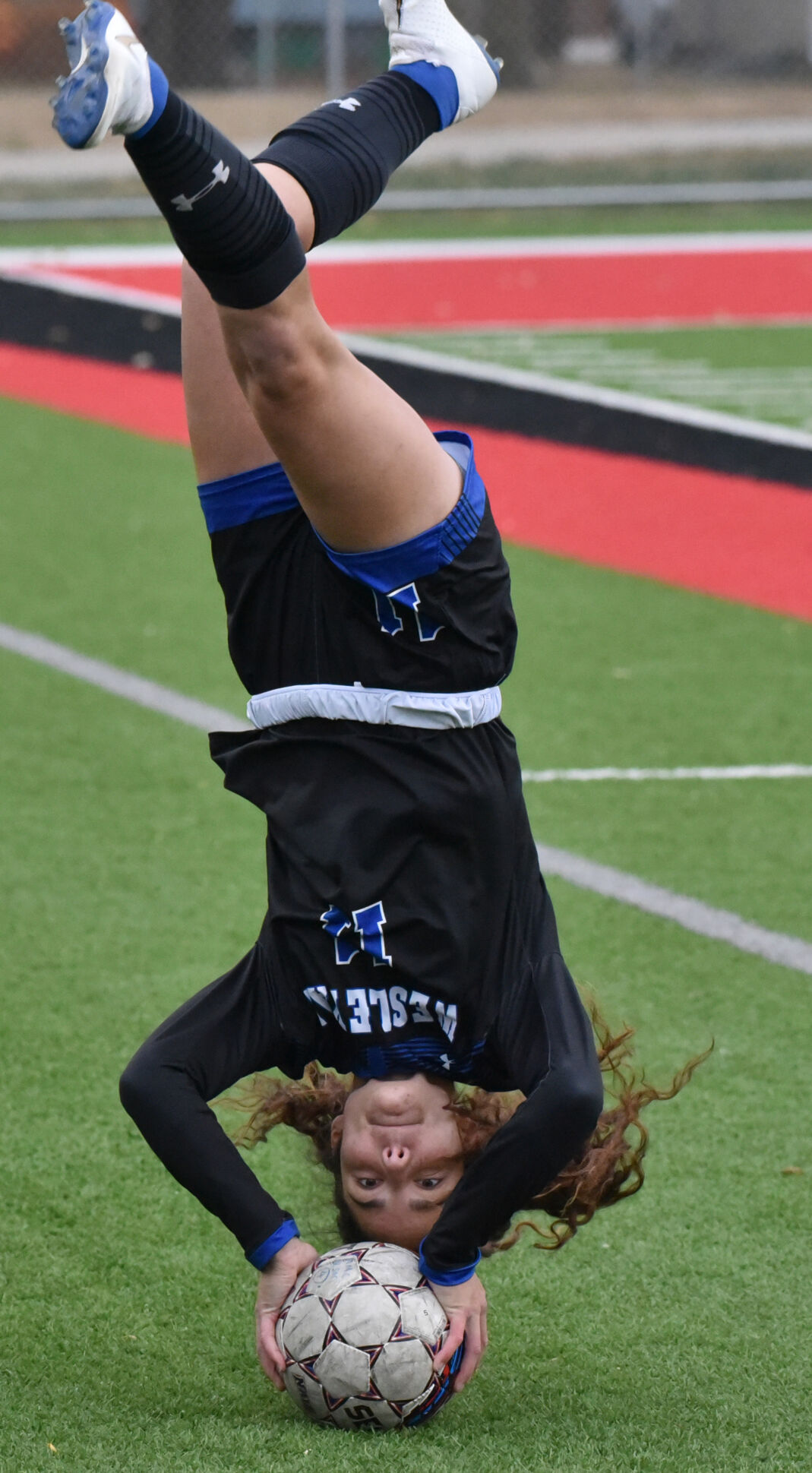 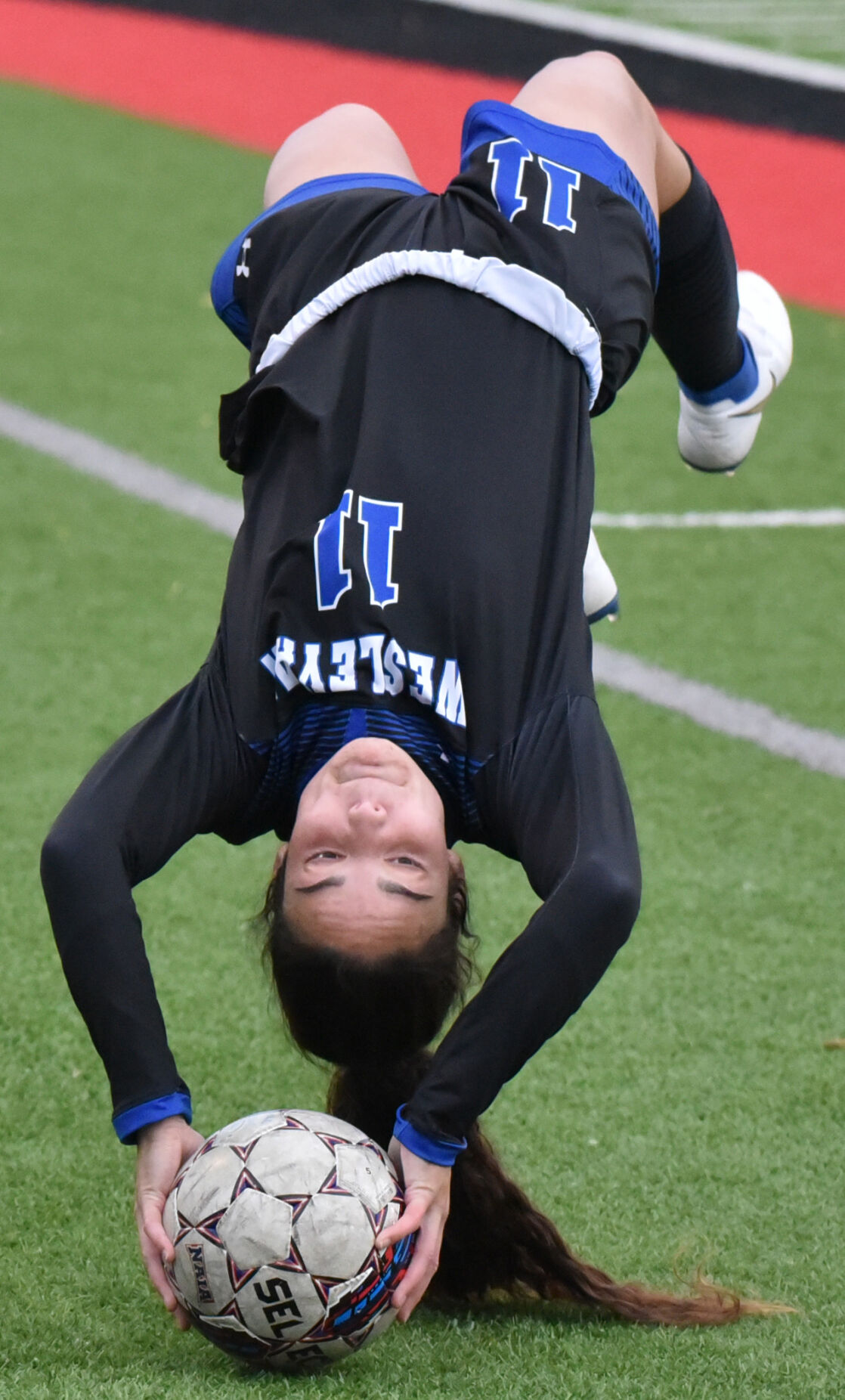 Mount Marty's Taylor Dunn, 26, stands in the wall with teammates Claire Buhr (27), Tuenedi Villicana (14), Becky Wilkins (20) and Kenyonique Thompson (13) on a Dakota Wesleyan free kick during their Great Plains Athletic Conference women's soccer match on Wednesday at Crane-Youngworth Field. Dunn scored both goals for the Lancers in a 6-2 setback.

Mount Marty's Torrye Provencher tries to get around the defense of Dakota Wesleyan's Kassidy Johnson during their Great Plains Athletic Conference women's soccer matchup on Wednesday at Crane-Youngworth Field.

You’re more than welcome to throw an obstacle in front of Taylor Dunn.

She may not be able to break through those barriers with the same speed she once had, but she’s going to find a way through.

Dunn, you see, has twice torn the same ACL in her left knee. And both times, the California native has returned to the soccer field to play the game she loves.

The senior at Mount Marty University tore the ACL in her left knee for the first time while in high school, where she was a standout soccer player.

“I didn’t think I’d be able to play soccer anymore after that,” she said.

Dunn then played at a junior college and later came across Mount Marty on a scouting website. She was in the market for a school where she could play for her two final seasons of college soccer.

“It was the kind of small school and family atmosphere I was looking for, and it looked really appealing,” Dunn said.

She arrived at Mount Marty a year ago and became one of the top players on the women’s soccer team. Dunn then, however, tore the same ACL.

“I didn’t know how I’d adjust, because it was so hard coming back the first time,” she said.

Dunn may not have the same level of speed she once had, but she said she’s found a way to keep playing.

“I feel like I have to think more about runs and all the contact,” she said. “It’s just not the same.”

And her coaches and teammates have admired how hard Dunn has worked to get herself back on the field.

“Taylor has done a lot for herself and a lot for our team, and I don’t think people realize it,” MMU head coach Neil Mancktelow said. “She’s worked so hard behind the scenes to be able to get back out here and she deserves everything she’s received.

“She’s the type of player we want.”

If the Lancers (0-4) could have bottled the opening stages of each half in Wednesday’s game into a full 90-minute performance, they would have certainly given themselves a chance.

They held the Tigers off the scoreboard for the first 23:15 of the first hlaf and the opening 24:18 of the second half.

It were the final stages, though, that doomed the Lancers.

Dakota Wesleyan (7-2) took a 3-0 lead at halftime and then scored three more goals in the second stage of the second half to pull away from the Lancers.

Injuries and illnesses have wreaked havoc on Mount Marty’s roster this season, according to Mancktelow. The Lancers, for example, were limited to one substitute in the first half and zero subs in the second half.

“Anyone can see that we’ve struggled this season, with number of players and what we’re trying to do,” he said.

“And it’s entirely because of COVID. It’s just been a challenge.”

Down 3-0 at halftime, the Lancers quickly got going in the second half.

Dunn’s first goal, in the 53rd minute came on a shot from about 45 yards out. Her second goal, in the 64th minute was also from a good distance out, and it cut the margin to 3-2.

Dakota Wesleyan, however, got one back in the 70th minute (Josephine Bardsley’s second) and then scored twice within a 75-second span (Alyssa Weidler’s second and Deandrea Johnson) to put the game out of reach.

Mount Marty has a week off before a non-conference game next Wednesday against Presentation at 5 p.m. at Crane-Youngworth Field.