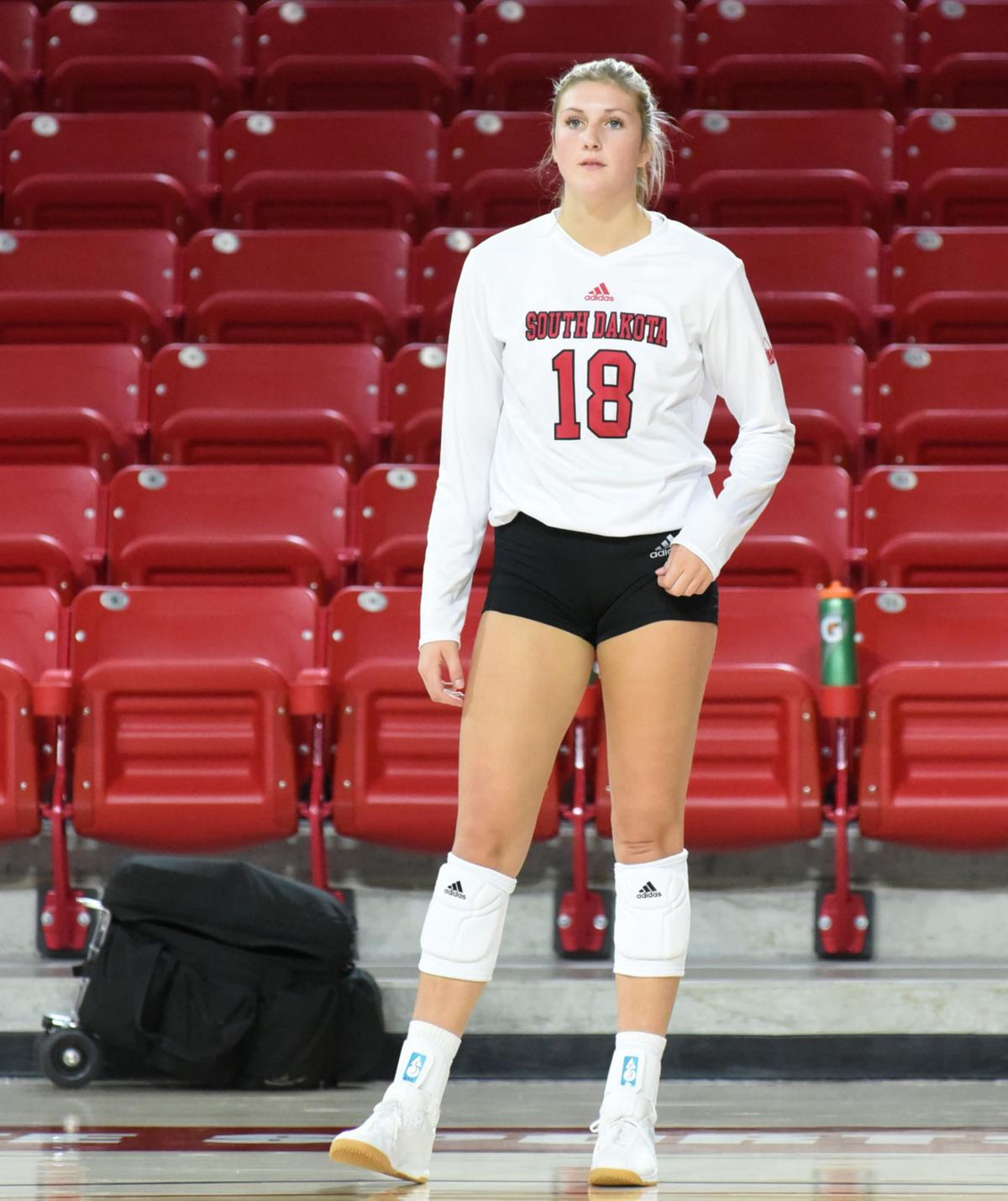 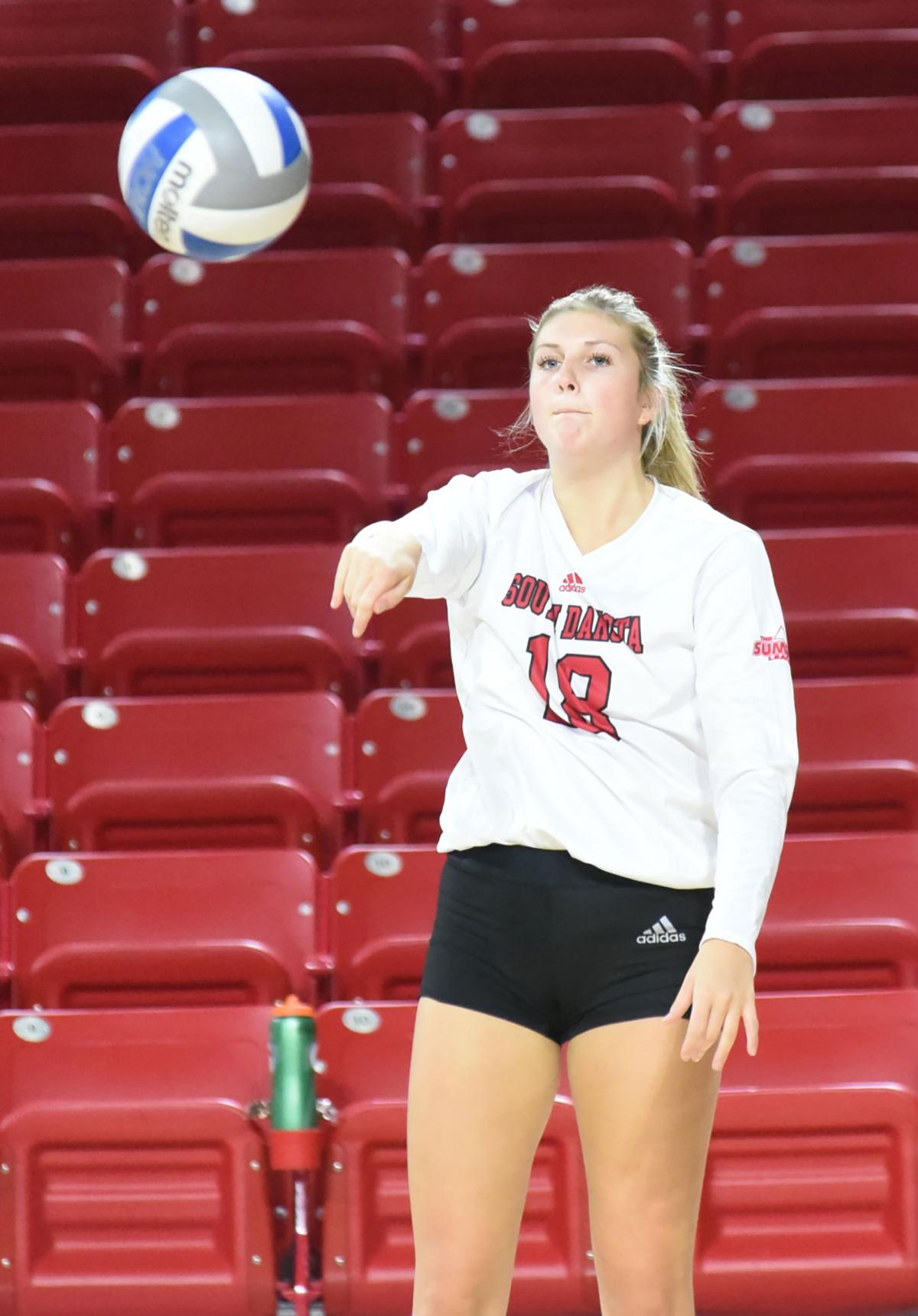 Maddie Wiedenfeld, an Omaha, Nebraska native, hits the ball over the net during Thursday's South Dakota volleyball practice at the Sanford Coyote Sports Center in Vermillion. Wiedenfeld's parents are from Hartington, Nebraska, and both attended Mount Marty College. 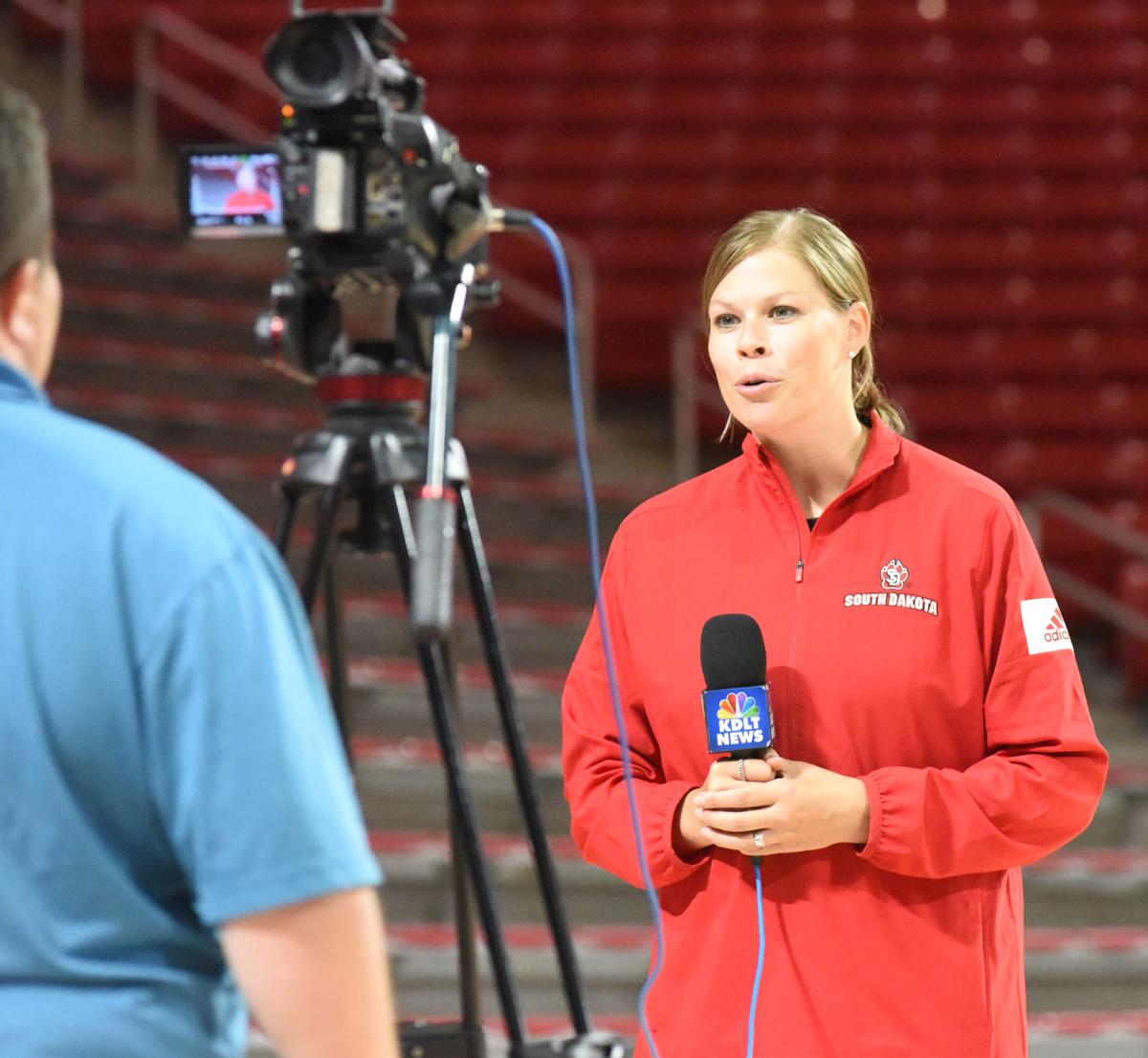 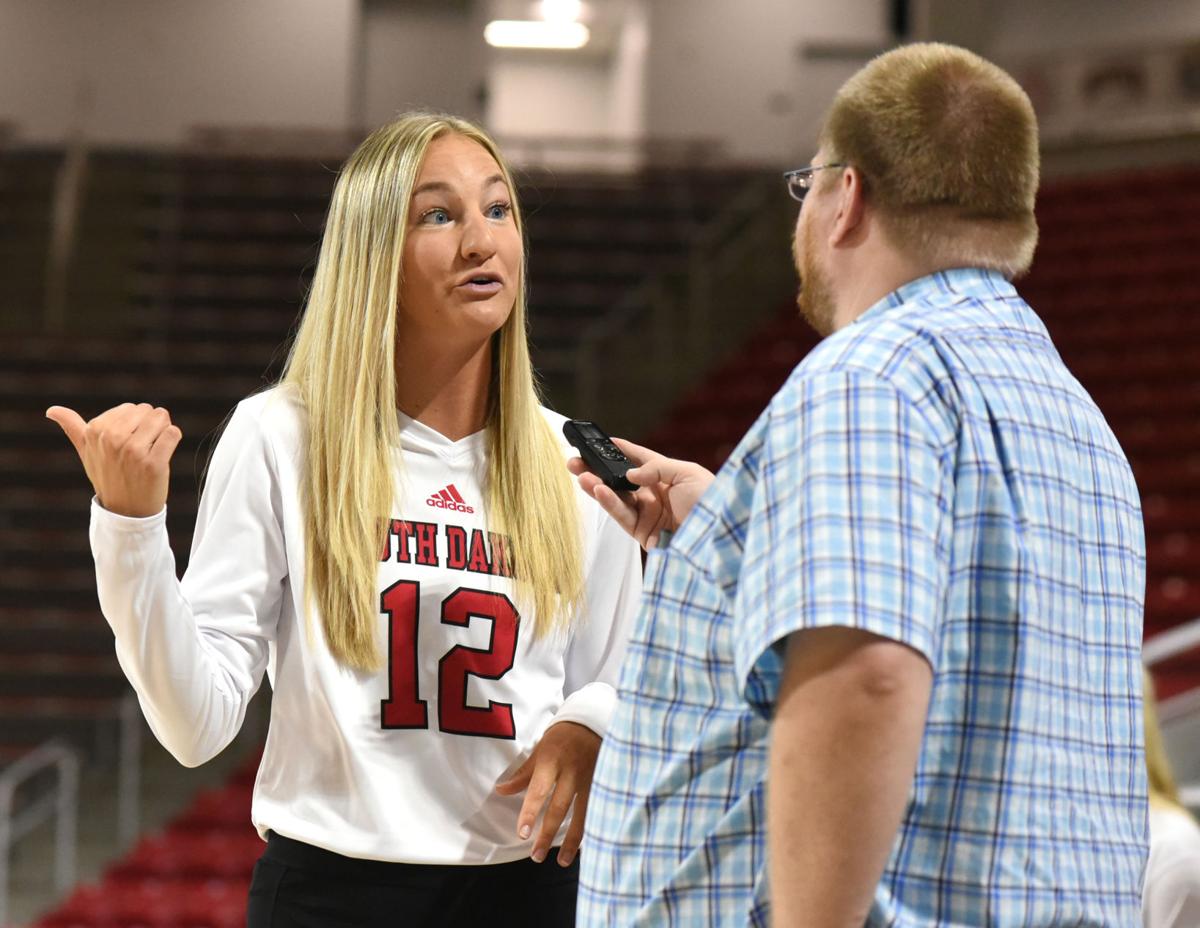 Maddie Wiedenfeld, an Omaha, Nebraska native, hits the ball over the net during Thursday's South Dakota volleyball practice at the Sanford Coyote Sports Center in Vermillion. Wiedenfeld's parents are from Hartington, Nebraska, and both attended Mount Marty College.

And for a kid from Nebraska, it doesn’t get much different than New Hampshire.

Imagine that conversation at home.

But that was the opportunity presented Wiedenfeld two years ago: She was given the chance to continue her volleyball career — after a standout career at Omaha Marian High School — at the University of New Hampshire.

Eventually, the distance became an issue.

“As time went on, I realized I needed to be closer to home,” Wiedenfeld said.

So began an odyssey that has taken Wiedenfeld — a 6-foot-2 middle blocker — from Omaha to the East Coast and now to Vermillion. She transferred to the University of South Dakota and will take the court next week for a Coyote program riding high after last year’s run to the NCAA Tournament.

“I wanted to continue playing volleyball and play at a high level.”

Now, the self-described ‘homebody’ is much, much closer to home.

Wiedenfeld, who has family in the area, arrived at USD with plenty of experience. She appeared in all 27 matches as a freshman last season at New Hampshire, and recorded 252 kills and 59 blocks.

Shortly after her decision to transfer became official, Wiedenfeld received an email from the USD coaching staff.

The opportunity provided her the best of both worlds: She’d be closer to home (close enough that her parents, grandparents and cousins could attend her matches) and could still play Division I volleyball.

“This just gave me everything,” Wiedenfeld said.

Her father, Chris, and mother, Stefanie, are both natives of Hartington, Nebraska, and both were athletes at Mount Marty College in Yankton. Chris played basketball for the Lancers, while Stefanie was a volleyball standout — she was inducted into the school’s Athletic Hall of Fame in 2002.

Although the family now lives in Omaha, Wiedenfeld spent quite a bit of time in Hartington when she was growing up.

“I love the small-town life,” she said.

As far as the Mount Marty connection, Wiedenfeld said she can remember traveling to Yankton with her mother for Lancer alumni games and for the Hall of Fame induction ceremony in 2002.

“They were excited that I was coming here,” Wiedenfeld said. “They’ve been so supportive, and they just knew it was a good thing for me.”

There’s one other connection that certainly helped solidify Wiedenfeld’s decision to transfer to USD: Her former high school teammate, Elizabeth Loschen, is a senior for the Coyotes.

“I saw her come here and I knew she loved it here,” Wiedenfeld said.

And don’t think the USD coaches used that connection to their advantage. The message to Wiedenfeld was, in essence, you already know Loschen; she could help answer any of your questions.

“I definitely contacted her a few times,” Wiedenfeld said, with a smile.

Let’s just put it this way: She had no idea.

“The coaches did tell me, ‘We’re looking at her,’ and I was like, ‘What the heck? She’s transferring?’” Loschen joked Thursday.

After Loschen had helped Omaha Marian win state championships as a sophomore (2014) and junior (2015), Wiedenfeld was a part of the state title team as a senior (2017). While Loschen continued her career in Vermillion, Wiedenfeld headed east.

It’s crazy how things work out, however.

“It’s so fun. It’s like a little piece of home,” Loschen said.

Wiedenfeld and Loschen are playing volleyball again together.

“We just picked up right where we left off,” Loschen said.

Of course, in Wiedenfeld’s case, it’s not exactly where she left off. She’s back in the Central Time Zone.

Her journey home suddenly became much easier. Instead of needing two flights to reach Omaha, Wiedenfeld is now a two-hour away.

“Now being here, I actually have the opportunity to go home whenever I need to,” Wiedenfeld said.

* A deluxe 2-bedroom apartments, water/garbage. Up and downstairs available.