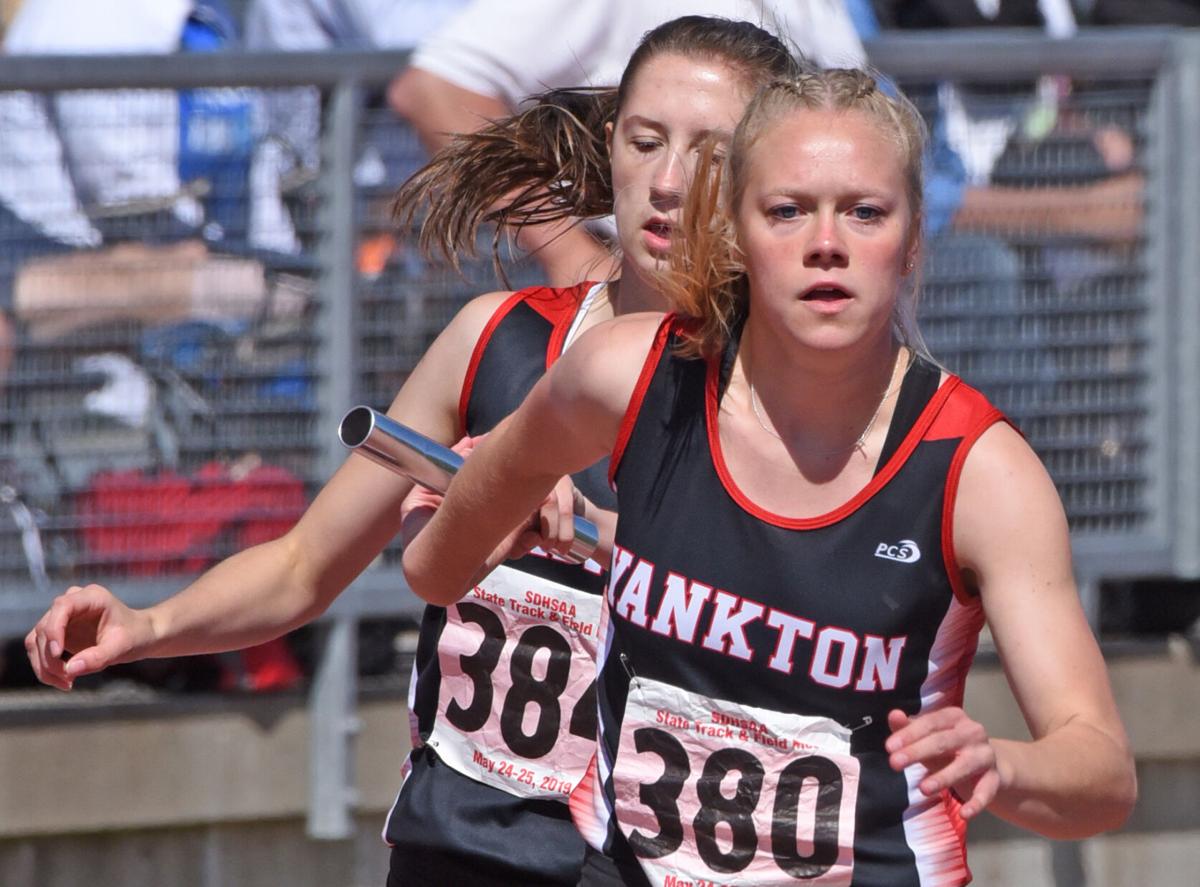 Yankton’s Kelsey Oswald (380) reaches back to take the baton from teammate Cora Schurman in the Class AA girls’ 800-meter relay during the 2019 South Dakota State Track and Field Meet. Both would have been key members of the 2020 Gazelles squad, which was sidelined along with the rest of the spring sports teams by concerns regarding coronavirus. 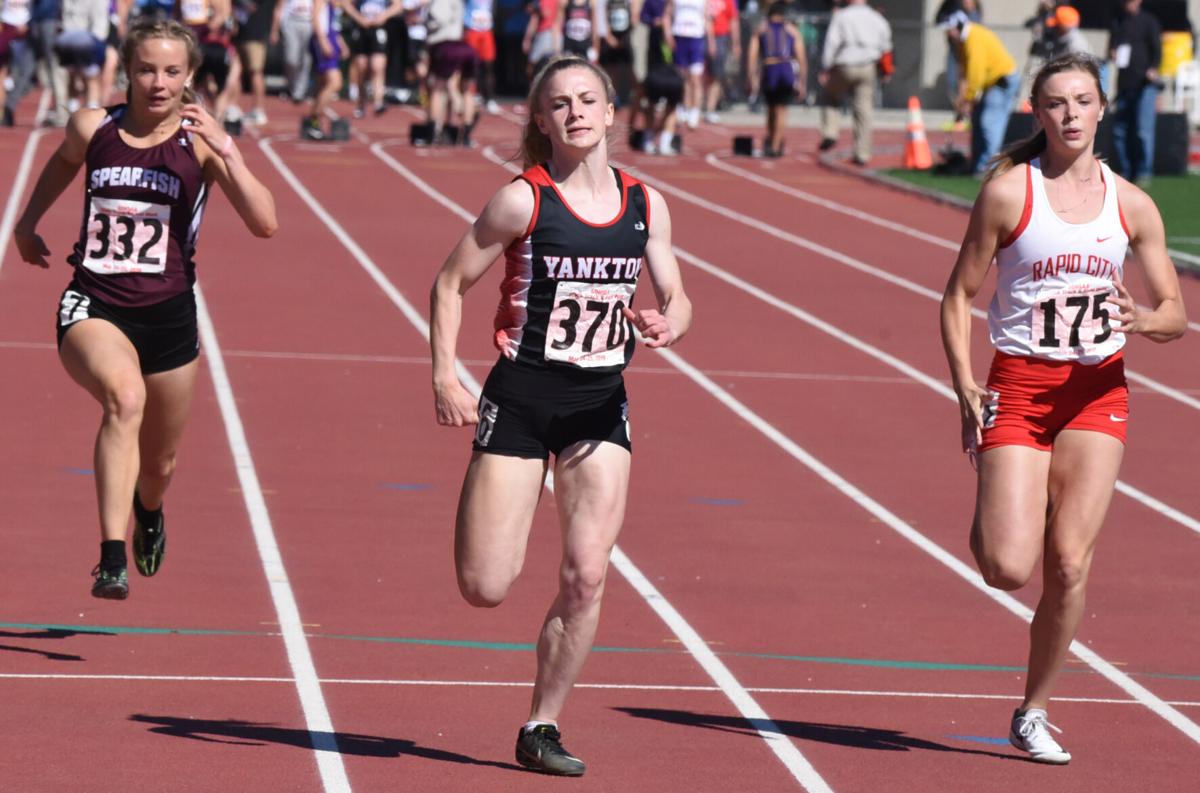 Yankton’s Jaiden Boomsma, center, finished second in the Class AA girls’ 100-meter dash during the 2019 state meet. Boomsma, who was also second in the long jump and fifth in the 200-meter dash, was poised for a potentially record-breaking senior season. She will compete in track and field at South Dakota State.

Yankton’s Kelsey Oswald (380) reaches back to take the baton from teammate Cora Schurman in the Class AA girls’ 800-meter relay during the 2019 South Dakota State Track and Field Meet. Both would have been key members of the 2020 Gazelles squad, which was sidelined along with the rest of the spring sports teams by concerns regarding coronavirus.

Yankton’s Jaiden Boomsma, center, finished second in the Class AA girls’ 100-meter dash during the 2019 state meet. Boomsma, who was also second in the long jump and fifth in the 200-meter dash, was poised for a potentially record-breaking senior season. She will compete in track and field at South Dakota State.

EDITOR’S NOTE: This is the final installment in our ‘Lost Season’ series, which documents how student-athletes adjusted to their seasons being cancelled due to the coronavirus pandemic

All of her training was geared toward one end: Track season.

Suddenly, it was all taken away in March, due to the COVID-19 pandemic.

Gone for seniors like Boomsma was the remainder of their school year; in-class instruction at least. Gone were traditional senior-year events. Gone was the track & field season. Gone was the state meet.

It was all taken away.

An opportunity, she added, to improve on her own performances at the state meet (she notched a pair of runner-up finishes and totaled 20 points) and her team’s performance (the Yankton girls finished ninth in Class AA).

When official word came down that the spring sports seasons would not be held in South Dakota and that there would be no state track meet, Boomsma was training at Williams Field (adjacent to YHS) with her cousin Seth, who runs an athletic performance program based in Sioux Falls.

“I saw the alert on my phone, and my heart kind of dropped,” Boomsma said. “I was super bummed.

“This year was supposed to be my year.”

While Boomsma had spent the winter months preparing herself for the spring track season, a handful of her senior classmates were gearing up for the upcoming state girls’ basketball tournament in mid-March.

Kelsey Oswald was obviously in basketball mode at that point, but she said she remembers quickly thinking about the spring.

“Right when it happened, the big focus was, ‘Would we have our state tournament?’, but then it was ‘Oh my gosh,’ what about track?’” Oswald said.

While Oswald and her basketball teammates were preparing for the program’s first state tournament appearance since 2011, the YHS track coaches were already in planning mode for the spring season.

There was, after all, an early season indoor track meet in Mitchell quickly approaching by that point. Head coach Luke Youmans said he can even clearly remember sitting in the locker room planning for that first meet with his coaching staff.

“We as coaches shared the same sentiment, that it would be a special year,” Youmans said.

In the end, however, it wasn’t meant to be.

Those seniors like Boomsma and Oswald didn’t get an opportunity for one final season and one final state track meet. The coaches, on the other hand, will be back, and Youmans even admitted that’s been a hard pill to swallow.

“Every year I get to relive another World Series; I get to do this every year,” Youmans said. “But for these kids, they don’t have that.”

A year ago at the state track & field meet, the Yankton girls recorded 43 points and finished ninth in the Class AA team standings.

It would’ve taken quite a jump for the Gazelles to ascend into the state championship conversation, but with what they had back for this spring — all 43 points would’ve returned — expectations were understandably high.

“There was a feeling that this could have legitimately been our year,” Youmans said. “What that means; either winning state or placing at state, we had that conversation many times.”

Here is a look at what the Yankton girls would have returned this spring, with top-eight performances from last year’s state meet:

A number of other athletes also qualified for individual events at the state meet, and the Gazelles also finished third in the 800-meter relay, fourth in the 3200-meter relay and seventh in the 1600-meter relay.

Optimism was high, according to Boomsma.

The Gazelles were especially excited to see how their 800-meter relay quartet would finish, with all four members back: Madison Schroeder (Sr.), Cora Schurman (So.), Oswald and Boomsma.

“That was a huge bummer,” Oswald said. “This was our year. Three out of the four were seniors, and we’ve been working together for five years.”

Although the Yankton boys’ team recorded only 13 points (Matthew Mors was the high jump runner-up and the medley relay finished fifth) at last year’s state meet, there were also plenty of reasons to be excited for the Bucks this season, according to Youmans.

“We had some young distance guys coming off tremendous cross country seasons and we were excited about them moving up through the ESD ranks,” the coach said. “They were ready to make that next jump.”

Although Oswald and Boomsma missed out on a chance to compete at the state meet last weekend, they were able to at least have some sort of final hurrah.

They joined a handful of other athletes (boys and girls) for a kind of time trial meet with Boom Athletics — the program run by Boomsma’s cousin — in Mitchell.

“You work so hard for so long to reach a certain point, so we wanted to see how things would go,” Oswald said.

“It was a kind of closure for us.”

Oswald had heard the cliché many times.

Every high school student has.

They’re told to make sure to enjoy every step of the journey because the days and weeks and months and years will fly by.

“Everyone always says high school goes by so fast, but wow, you never realize how quickly it could go,” Oswald said.

Not only did seniors like Oswald and Boomsma get the remainder of their high school athletic careers taken from them, they wouldn’t get to experience traditional senior year events such as prom.

That’s where the guidance of their coaches became critical — a reassurance, Youmans said, that if this was the biggest obstacle in their life, they would live a good life.

“It’s also been a great reminder that there will be bigger pains and obstacles,” he said. “We’ve tried to convey that message to them.”

Time was necessary, though, for the immediate sting to fade away.

“To be honest, I didn’t see any good in the situation at the beginning,” Boomsma said.

“But then I realized that it’s good that everyone is staying healthy.”

In time, another realization set in, according to Boomsma: Those athletes were rather fortunate.

“The whole experience made me realize that we’re so lucky to have such great coaches and teammates,” Boomsma said. “You almost take for granted that you have this opportunity.”

Though their careers didn’t end the way they planned (in the case of Oswald and Boomsma, at the state track meet), they’ve enjoyed their journey.

“We’ve had such great support and I can’t thank everyone enough,” Boomsma said.