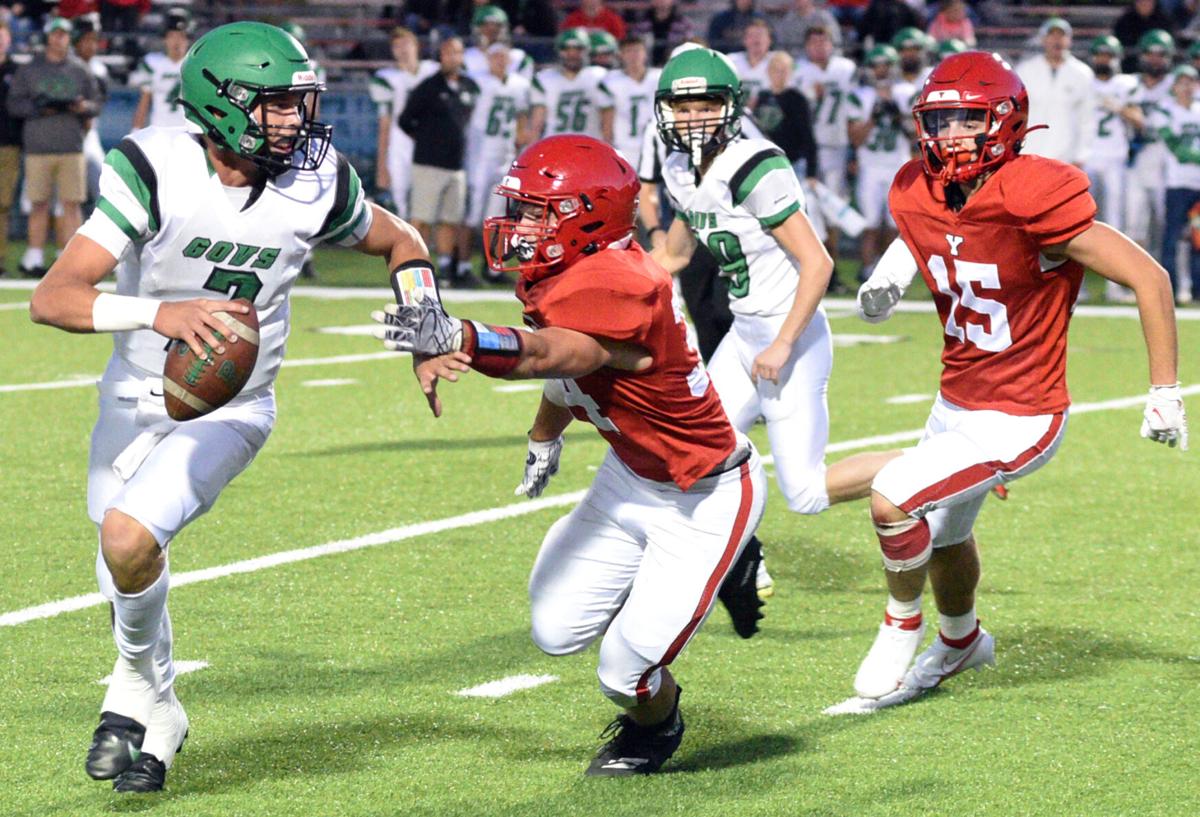 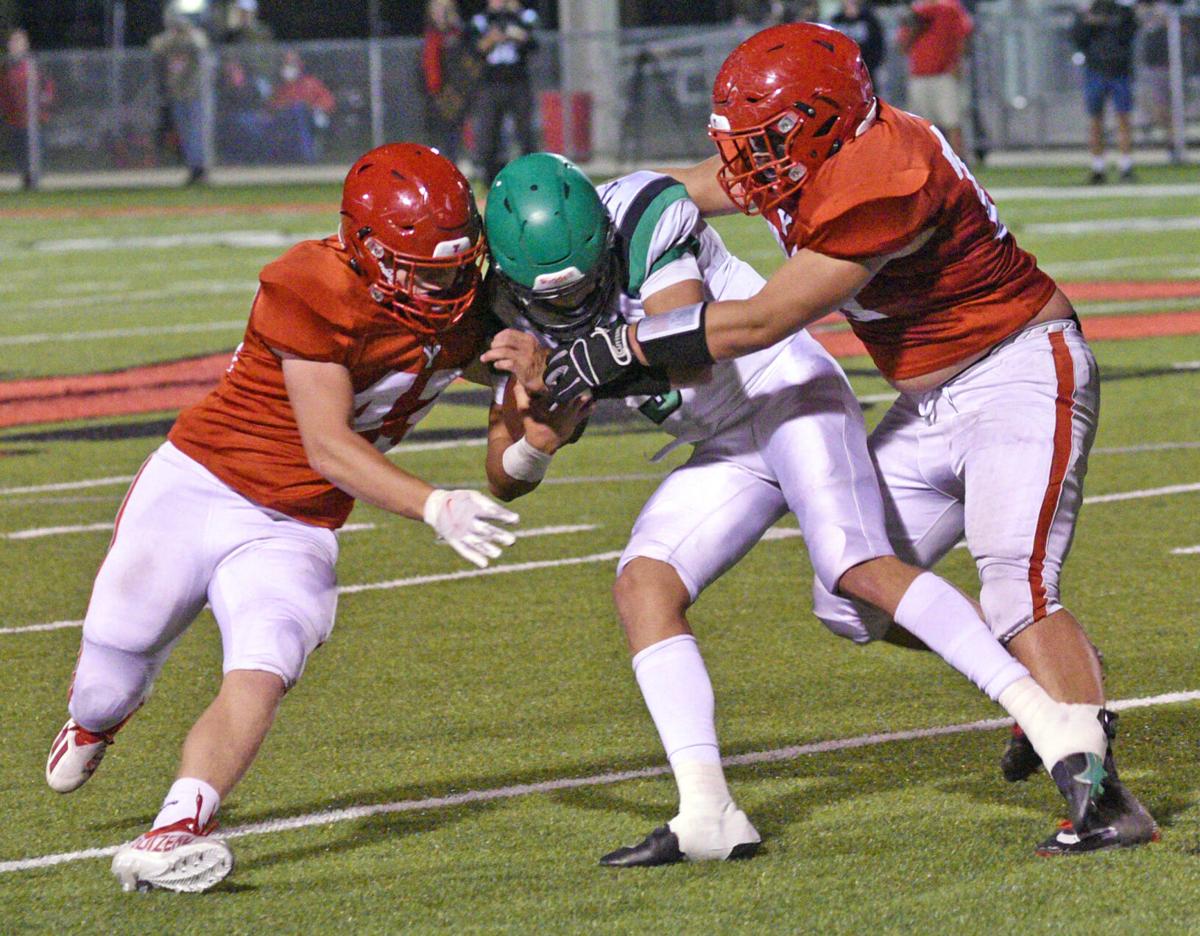 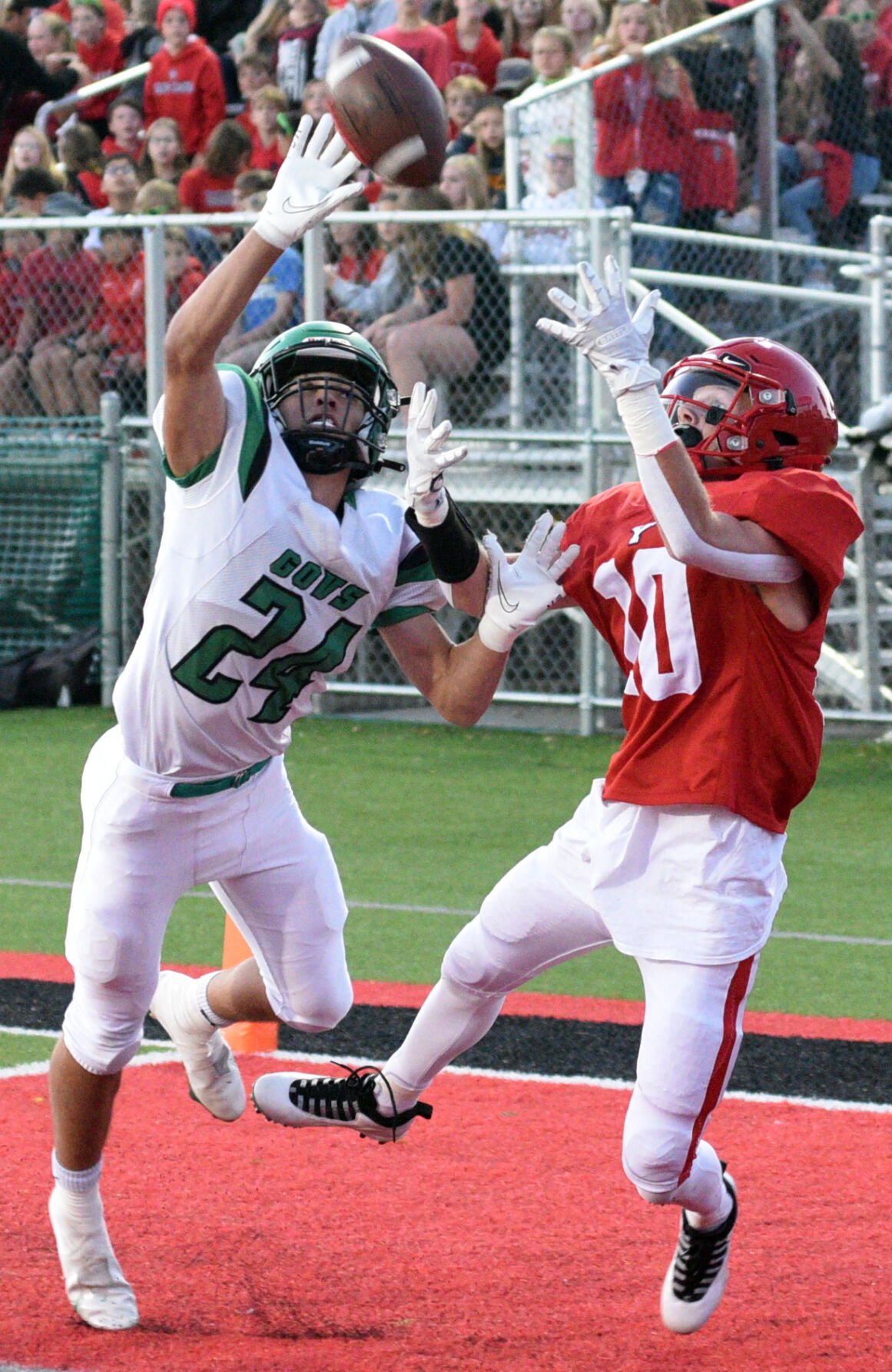 Pierre's Deegan Houska, 24, breaks up a pass in the endzone, intended for Yankton's Tyler Sohler during their Eastern South Dakota Conference football game on Friday at Yankton's Crane-Youngworth Field.

Pierre's Deegan Houska, 24, breaks up a pass in the endzone, intended for Yankton's Tyler Sohler during their Eastern South Dakota Conference football game on Friday at Yankton's Crane-Youngworth Field.

Yankton was looking to get back on track on homecoming, while the four-time defending state champion Pierre Governors were looking to play spoilers Friday at Crane Youngworth Field.

Pierre jumped out to an early two-touchdown lead and didn’t look back in a 24-10 win over Yankton.

“I thought they played hard, I don’t think we’re ready to play, and that’s on me,” Bucks head coach Brady Muth said. “It was a two score game and we had busts early on. I’m happy with the way we responded, but we have to stop putting ourselves in those positions.”

Pierre started off the game with the ball and took one play to put themselves ahead by a score. Lincoln Kienholz found Jack Merkwan for a 71-yard touchdown pass.

After a Yankton 3-and-out offensively, Kienholz and the Governor offense marched down the field and scored on a short touchdown run by Kienholz. The Bucks were reeling as the ensuing kick-off was fumbled by the Bucks and Pierre had the ball with an opportunity stretch the lead to three scores before Yankton could blink.

“I thought our defense responded well, I just wish we didn’t have to respond,” Muth said. “It’s a long season, this one stings a little bit because this is not who we are, it’s not what our fans deserve.”

Pierre missed a field goal, and the Bucks were still down 14-0. Yankton’s second drive on offense resulted in points, as Trevor Paulsen kicked a 45-yard field off a goal-post and through for three. The Bucks now trailed 14-3 after one quarter.

That would be the score at the half as well as each team’s defense stiffened up in the second quarter. Rugby Ryken and the Bucks would move inside the Pierre 30-yard line before Ryken threw an interception in the end zone that was picked off by Kienholz.

The two teams exchanged punts for the remainder of the half until Kienholz fumbled the ball in his own territory and Yankton was able to line up for a 41-yard field goal at the end of the half. Paulsen’s field goal went wide left and the Bucks trailed 14-3 at the intermission.

The Bucks punted on their first possession of the second half, but was able to force a Kienholz interception when Jaden Supurgeci won a jump ball. Yankton again punted on the ensuing position. At the end of three quarters, the score remained 14-3.

Pierre extended the lead to 14 with a field goal 17 seconds into the fourth quarter. After the Bucks were unable to move the ball on the offensive side, Pierre marched down the field, ticking time off the clock and scoring on a one-yard run by Kienholz.

“After the first three series, we were fine,” Muth said. “I thought our defense really settled in. Offensively, we’ve got to do a better job of finding answers.”

Ryken was able to find Cody Oswald for a 36-yard touchdown with less than two minutes to play, cutting the Pierre lead to a 24-10 advantage.

Pierre was about able to run out the clock and leave Crane Youngworth with a win. The Bucks are back in action Friday at Mitchell. Kick-off is set for 7 p.m.