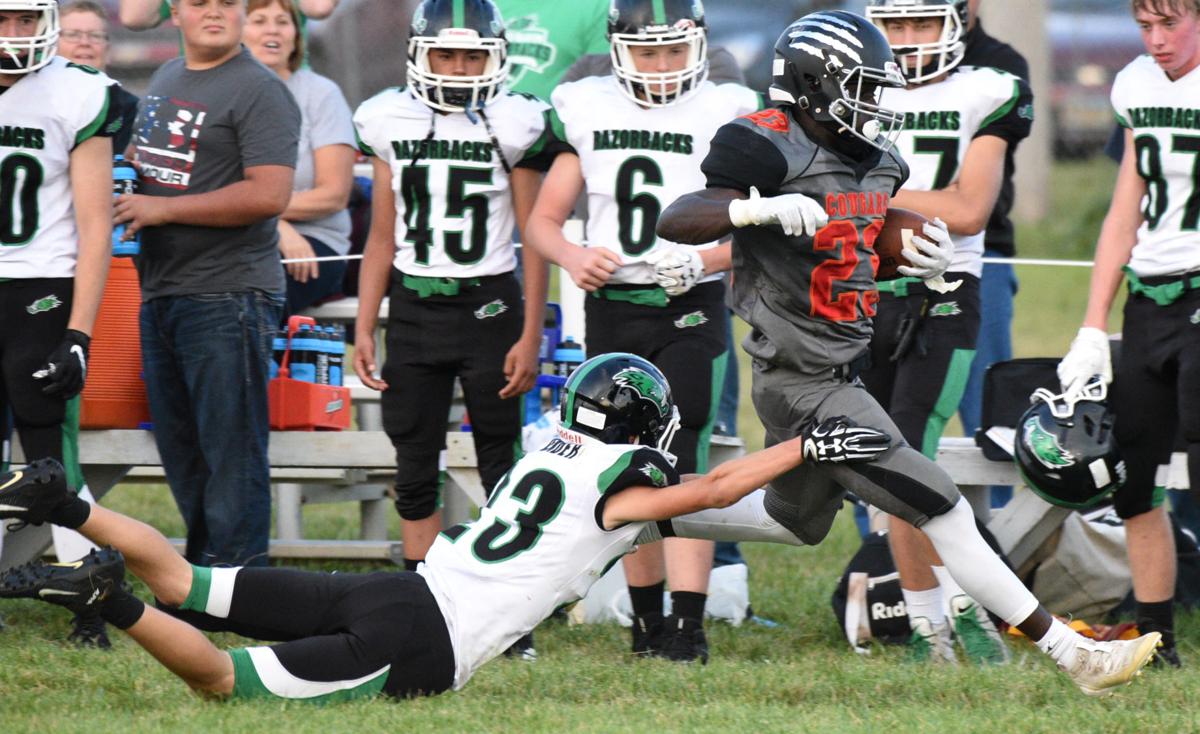 Viborg-Hurley's Angel Johnson avoids a diving tackle attempt by Menno-Marion's Levi Bender on the way to a touchdown during their prep football game on Friday in Viborg. 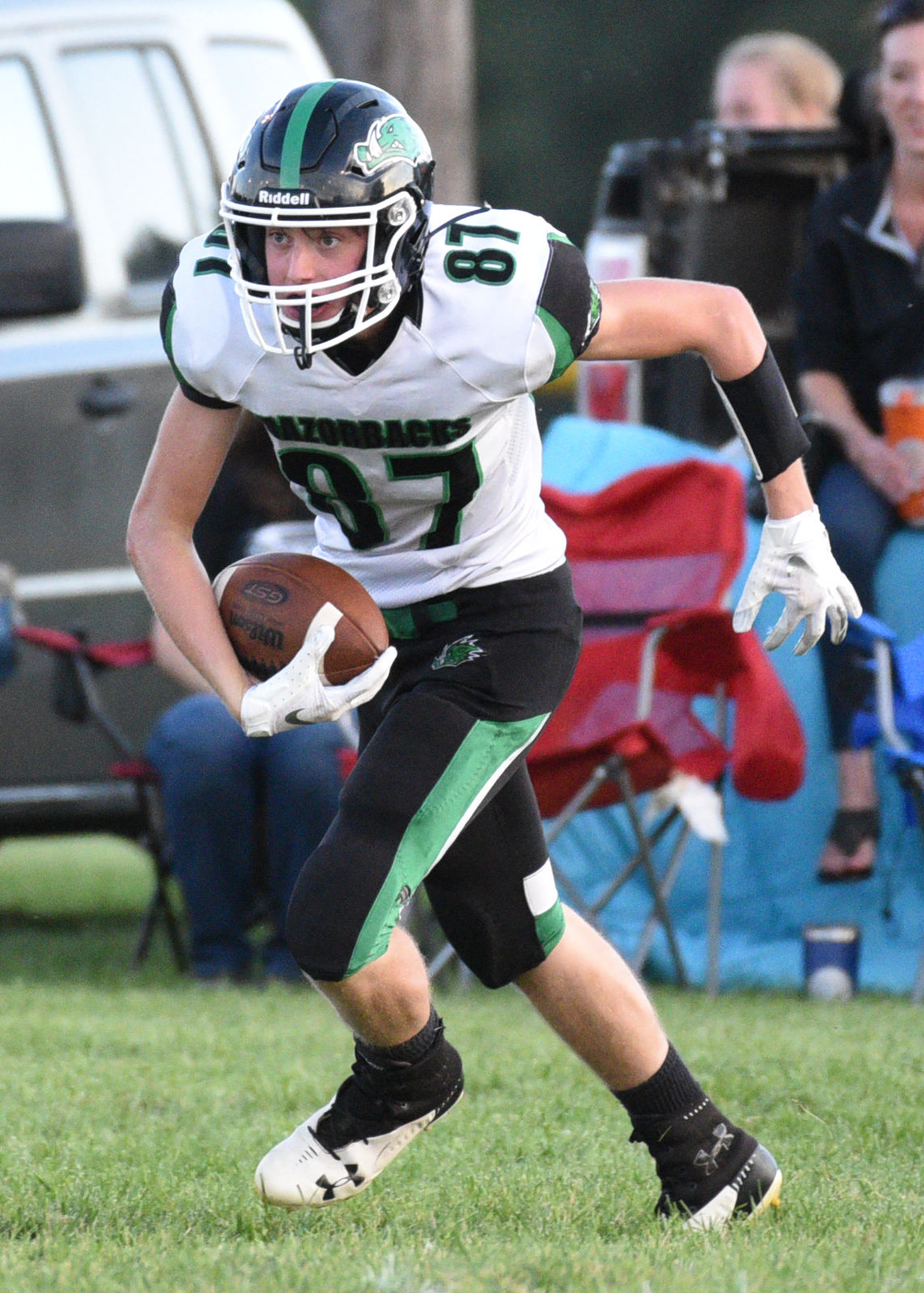 Menno-Marion's Aidan Friesen takes off after fielding the opening kickoff of a prep football game against Viborg-Hurley on Friday in Viborg. 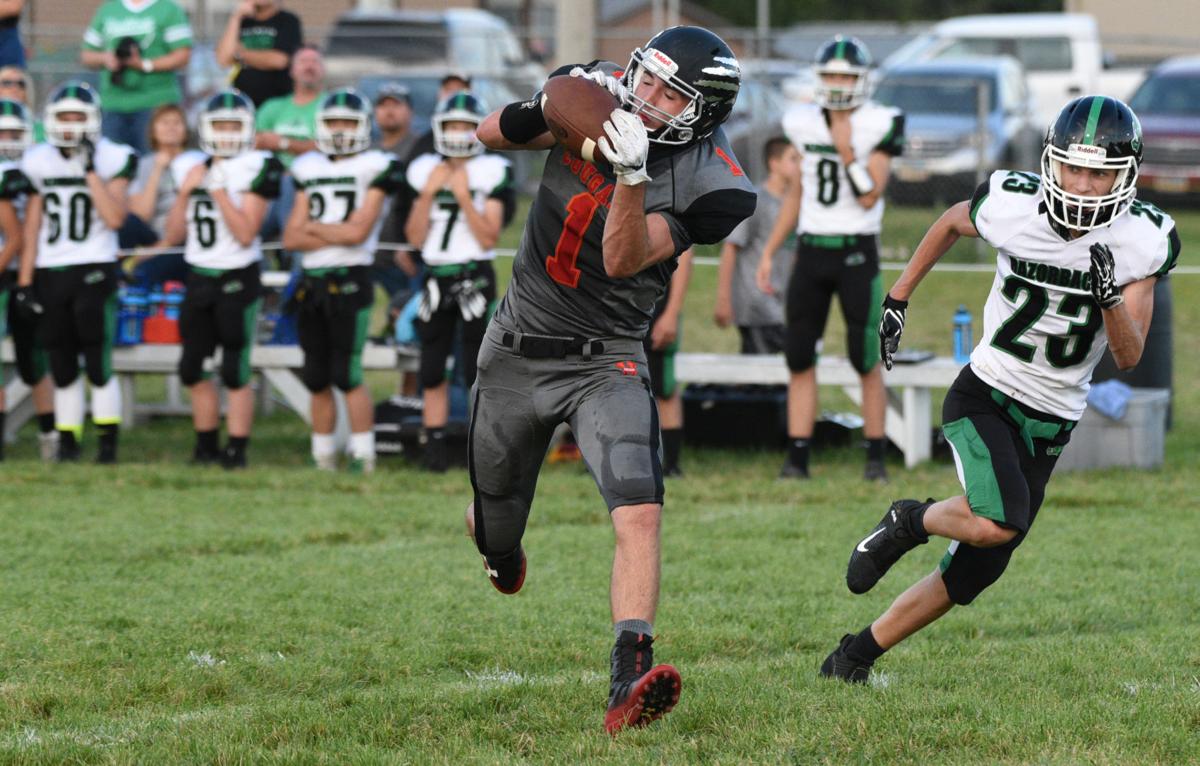 Viborg-Hurley's Shane Andersen hauls in a pass as he is pursued by Menno-Marion's Levi Bender during their prep football game on Friday in Viborg. 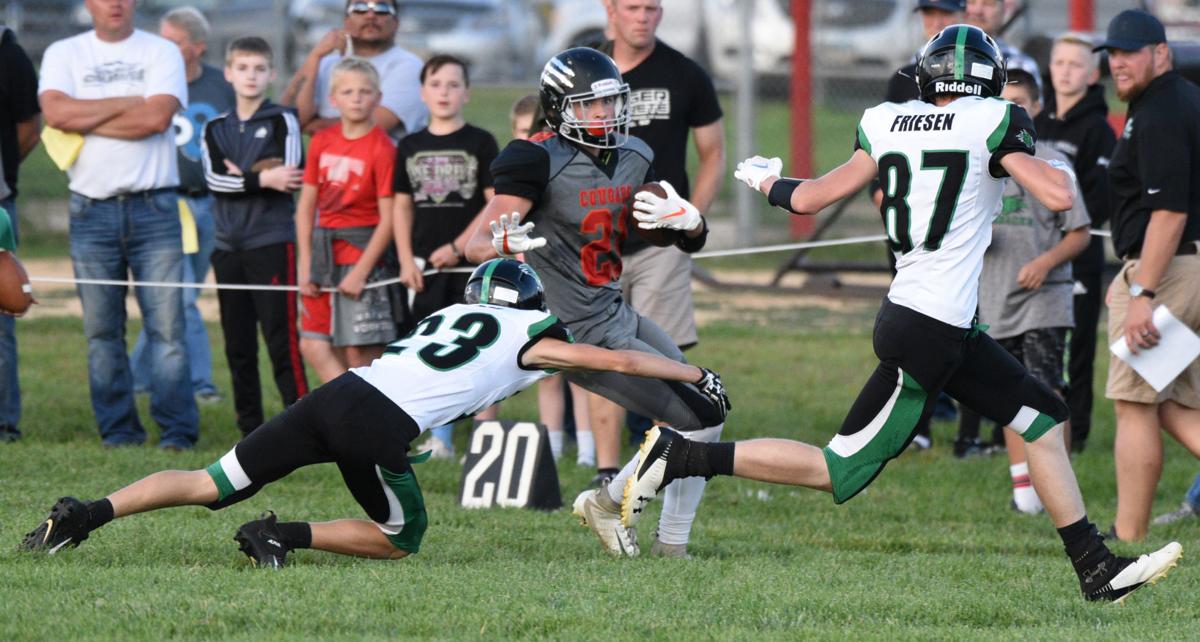 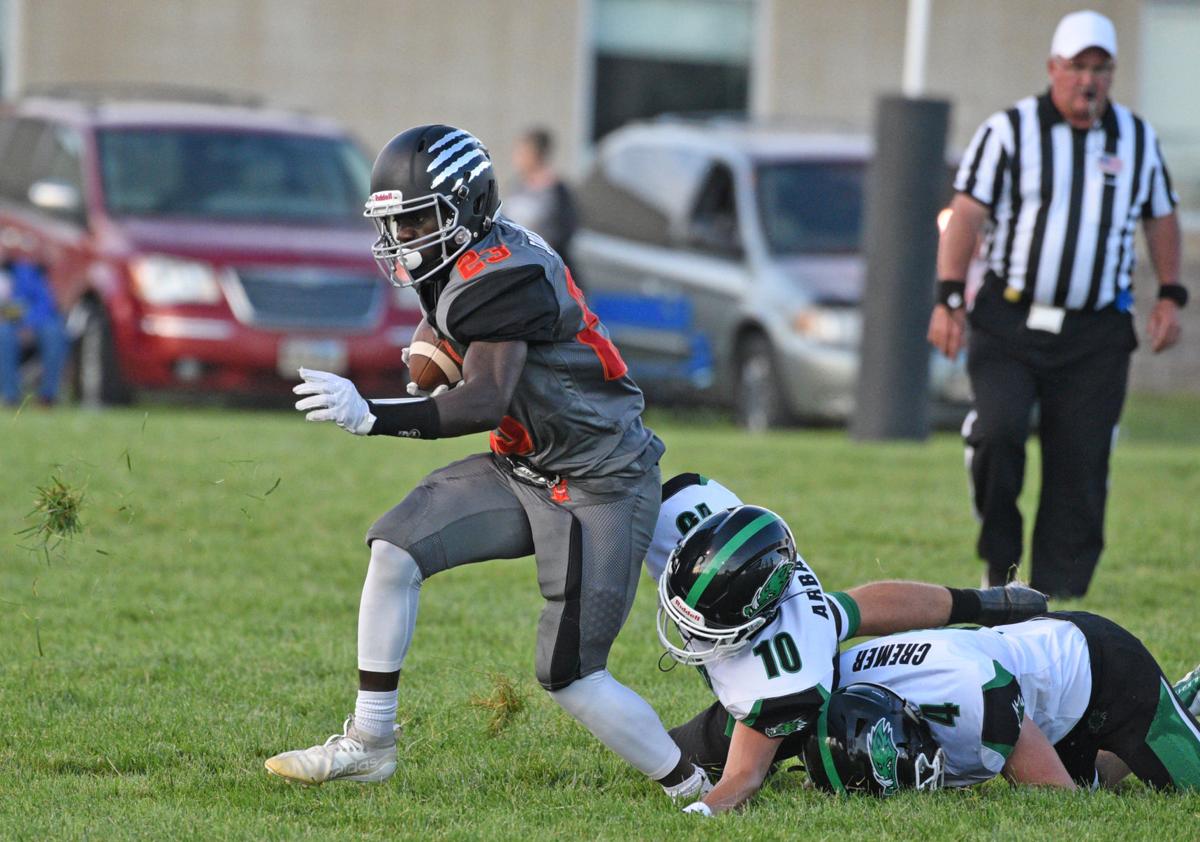 Viborg-Hurley's Angel Johnson (23) tries to escape a diving tackle attempt from Menno-Marion's Payton Arbach (10) during their prep football game on Friday in Viborg. 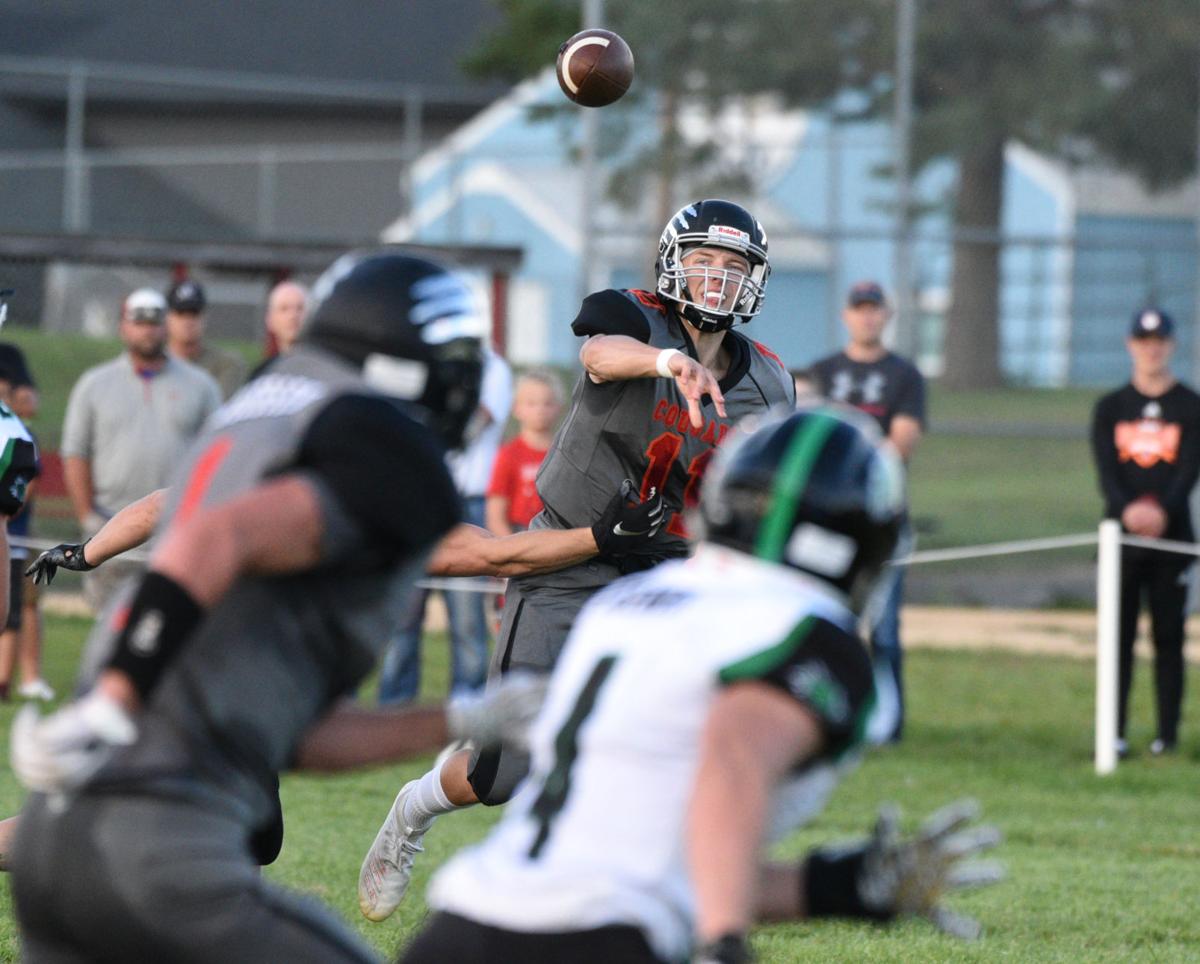 Viborg-Hurley's Chase Mason fires a pass to teammate Shane Andersen (left) during the Cougars' prep football game against Menno-Marion on Friday in Viborg. Defending on the play was Menno-Marion's Danny Cremer.

Viborg-Hurley's Angel Johnson avoids a diving tackle attempt by Menno-Marion's Levi Bender on the way to a touchdown during their prep football game on Friday in Viborg.

Menno-Marion's Aidan Friesen takes off after fielding the opening kickoff of a prep football game against Viborg-Hurley on Friday in Viborg.

Viborg-Hurley's Shane Andersen hauls in a pass as he is pursued by Menno-Marion's Levi Bender during their prep football game on Friday in Viborg.

Viborg-Hurley's Angel Johnson (23) tries to escape a diving tackle attempt from Menno-Marion's Payton Arbach (10) during their prep football game on Friday in Viborg.

Viborg-Hurley's Chase Mason fires a pass to teammate Shane Andersen (left) during the Cougars' prep football game against Menno-Marion on Friday in Viborg. Defending on the play was Menno-Marion's Danny Cremer.

PARKER – The Parker Pheasants continued their strong play this season, as they defeated the Hanson Beavers 42-20 in Parker on Friday night.

Hanson got off to a quick start after Reggie Slaba hit Peyton Schroeder on a 49-yard touchdown pass in the first. Tanner Even then had two touchdown runs of 34 yards, and two yards, to put Parker up 14-6 going into half time. Colby Olson then had an 11-yard run for the Pheasants to begin the second half, before Hanson’s Jackson Jarding returned the ensuing kickoff for a 73-yard touchdown.

However, Parker kept up the strong offense, as Mace Plucker had a 62-yard touchdown run, while Matt Van Vleit had a 1-yard touchdown to go up by 22, before Hanson had their last score of the night on a Reggie Slaba touchdown pass to Peyton Schroeder from 19 yards out. Tanner Even would then seal the game for Parker with a 61-yard touchdown run late in the fourth quarter.

Overall, Parker rushed for 404 yards, with Even finishing with 137 yards, and three touchdowns. Lane Wieman would also have 15 carries, and 101 yards for the Pheasants.

Next Friday, Parker will play Menno/Marion in Menno, while Hanson will be at home against Corsica-Stickney.

Skylar Zomer carried the ball 23 times for 82 yards and a touchdown for Wolsey-Wessington (2-1). Marty Gohn and Caleb Liebnow contributed 38 yards a piece.

Bon Homme plays Parkston in Tyndall next Friday. Wolsey Wessington travels to Gregory next Friday for a game with Gregory.

Serck threw for three touchdowns and added another score on the ground to lead the Cubs (3-0). Serck eclipsed 90 yards through the air and 89 yards on the ground. Reed ran for 61 yards and two scores. Jovey Christensen led the team with 100 rushing yards. Jaxon Doering (17 yards), Kolby Schiefen (17 yards) and Alex Winquist (13 yards) each hauled in a touchdown reception.

Owen Hunter ran for 63 yards and Jack Walters 52 yards to lead Centerville (0-2). Hunter Ellis and Walters accounted for nine and a half tackles apiece to lead the Centerville defense.

PARKSTON – Nolan Kirsch led the Kimball/White Lake WildKats to a 46-20 victory over the Parkston Trojans on Friday night in Parkston.

The WildKats will play again on Sept. 20 in Platte against Platte-Geddes. Meanwhile, Parkston will travel to Tyndall next Friday to face Bon Homme.

AVON —Mason Dennis scores through the air and on the ground in the third quarter to lead Scotland past Avon 22-6 Friday night.

Mason Dennis threw for 77 yards and ran for 67 to lead Scotland. Turner Nicholson tallied 90 yards on 17 carries. Lucas Dennis accounted for 66 of the 87 team receiving yards.

Kory DeJong carried the ball 14 times for 78 yards and a 34-yard touchdown for Avon (0-3). Lincoln Thury led all defenders with nine tackles and Brady Bierema contributed eight and a half (seven solo, three assisted).

Avon hosts Centerville next Friday in Avon. Scotland will host Chester Area in Scotland on Sept 13.

RUTLAND – In a battle of undefeated teams, Canistota/Freeman defeated Oldham-Ramona/Rutland 58-6 in Rutland on Friday night.

Neither team would score in the second half until a 6-yard touchdown run by Jacob Swensen would end the game early in the fourth quarter.

Overall, Canistota/Freeman rushed for 311 yards, with Tyce Ortman having 137 yards rushing, and two touchdowns on the night. . Bailey Sage also finished with 70 yards rushing to go along with his game-high eight tackles on the night.

Oldham-Ramona/Rutland will play next Friday in Elkton against Elkton-Lake Benton. Canistota/Freeman, meanwhile, will continue their undefeated season next Friday on the road against Howard.

LAKE ANDES – The Gregory Gorillas used an explosive second half to defeat the T-D/A/AC/DC Thunderhawks 64-14 in prep football action on Friday.

Gregory took a commanding 36 to 14 lead into halftime, before adding 28 more in the third quarter.

The Thunderhawks were led by Michael Lue with nine carries for 59 yards, while Lue also recorded six tackles on the night. Tyler Faulkner also had one reception for 83 yards.

The Gorillas will play next Friday at home against Wolsey-Wessington, while the Thunderhawks will play at Sunshine Bible Academy.

VERMILLION – The Tea Area Titans won their seventh straight game dating back to last season, as they defeated the Vermillion Tanagers 36-6 in Vermillion on Friday night.

Before an offensive play had even been attempted, both teams scored their first touchdowns of the night. In what would be Vermillion’s only score of the night, John LaCognata returned the opening kickoff 98 yards for the touchdown. No sooner did the Titans respond, then a 78-yard kick return for a touchdown by Brayden Thompson on the ensuing kickoff.

Tea Area would score twice more in the first quarter, with an Austin Lake 9-yard run, and a 13-yard pass from Lake to Garrett Kolbeck. The Titans would then score once more in the first half on a Joey Headrick touchdown run from 13 yards out to take a strong 27-6 lead into halftime. Headrick would then score on a 52-yard run in the third quarter, before a Charlie Ward safety in the third finished off an impressive win for the defending 11A State Champions.

Headrick finished the night with 126 yards on 10 carries, and two touchdowns.

For the Tanagers, Kobe Culver, and Trevor Tarr, both led Vermillion with 14 tackles.

EJ Big Eagle completed eight passes for 141 yards and a score for Sunshine Bible Academy (0-3). The touchdown pass was thrown to Jade Burma, who caught three passes for 92 yards. Burma led the defense with eight tackles.

Burke has a bye week next week, followed by a home game against Colome on Sept 20. Sunshine Bible Academy hosts Tripp-Delmont-Armour-Andes Central-Dakota Christian on Sept 13 in Miller.

SIOUX FALLS — John Overby connects with Noah Van Stedum for a 12-yard touchdown with 3:56 to go in the fourth quarter to seal a 26-23 victory for Sioux Falls Christian over Mitchell Friday night in non-conference play.

Overby completed 11 passes for 158 yards and 4 touchdowns to lead the Chargers (2-0). Van Stedum pulled in six receptions for 96 yards and two scores, and Zach Witte three for 26 and a pair of touchdowns. Jaxon Hogan carried the ball 23 times for 119 yards.

Austin Kerr led the rushing and passing attack for Mitchell (1-1). Kerr threw for 75 yards, including a 19-yard touchdown to Carter Jacobsen. Kerr ran for 53 yards on 18 carries and two touchdowns (7 and 12 yards).

Sioux Falls Christian’s next game is Sept 13 against Beresford in Sioux Falls. Mitchell will travel across the state to take on Spearfish in Spearfish next Friday.