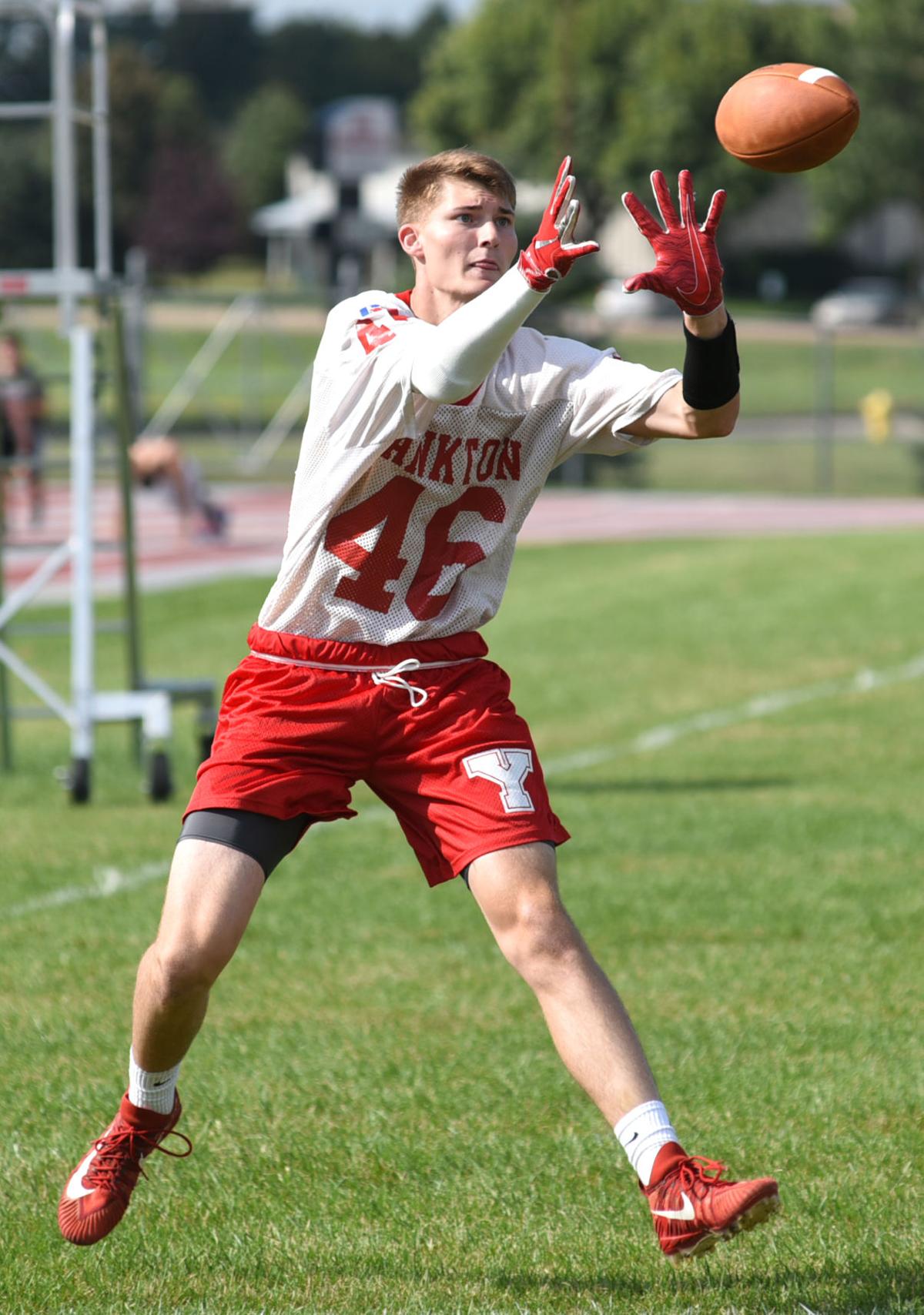 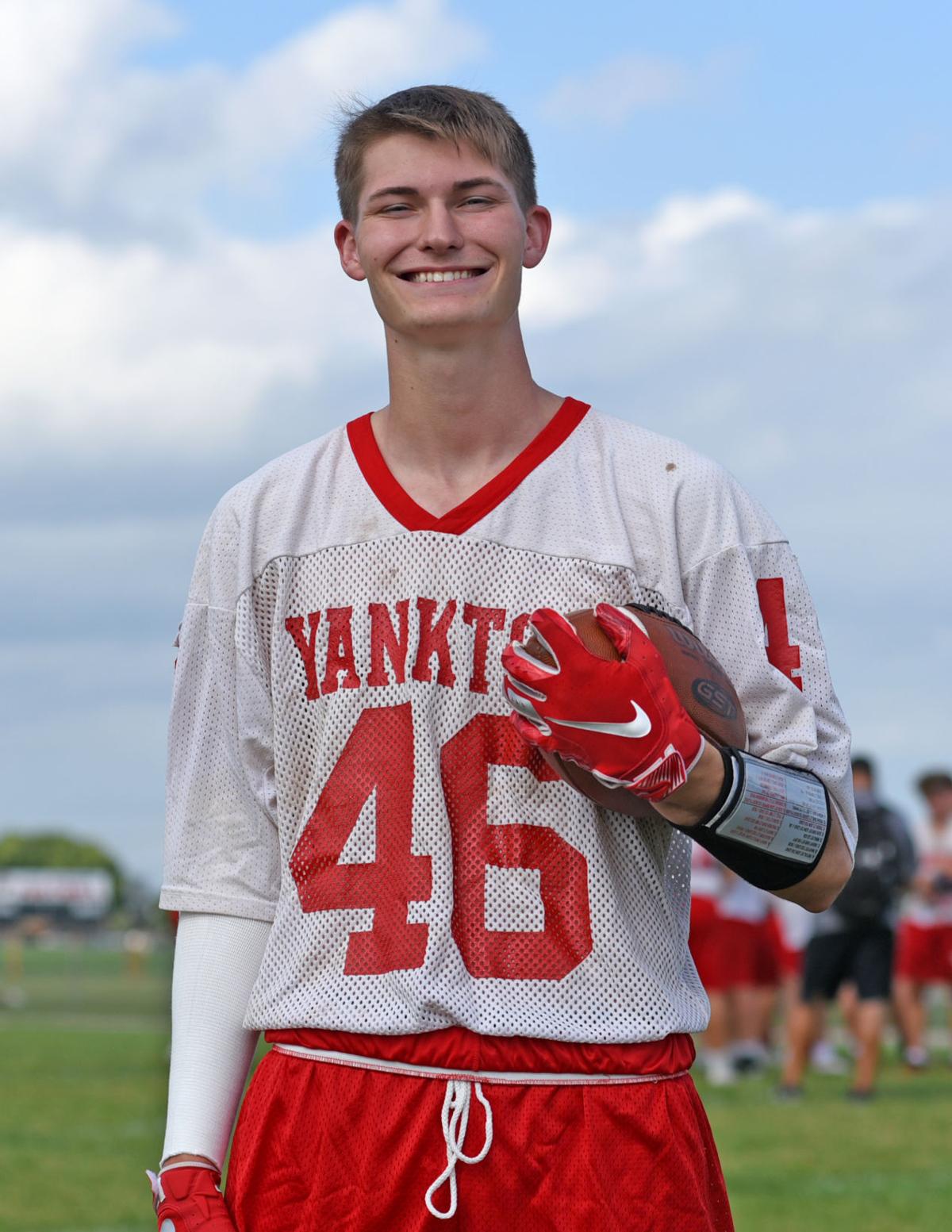 Yankton senior tight end Reggie Bruder, pictured before Monday's practice at Williams Field, has gotten an opportunity to make a name for himself on the varsity squad this season.

Yankton senior tight end Reggie Bruder, pictured before Monday's practice at Williams Field, has gotten an opportunity to make a name for himself on the varsity squad this season.

Reggie Bruder will never forget his first catch in a varsity football game.

It was two weeks ago. Under the bright lights of Crane-Youngworth Field. In front of a capacity crowd.

Bruder ran across the middle of the field, caught a pass from quarterback Cooper Cornemann, was hit by a Spearfish defender and popped right back up.

“But I didn’t really feel the hit, I was too much in the moment,” Bruder, a senior on the Yankton football team, said before Monday’s practice at Williams Field.

Later on, it him, though.

“I remember coming home to my mom and talking about the crowd cheering,” he said.

Bruder, a 6-foot-5 tight end, has progressed through the Yankton football system to now be in a position to be a varsity weapon. He has caught four passes for 44 yards over the first two games for the Bucks (1-1).

He finally has his chance.

“It feels good to know you’re on varsity and can get your name out there for the team,” Bruder said. “It’s a surreal feeling to be out there.”

Following the graduation of a handful of senior playmakers from last year’s Yankton offense that broke a number of program records, Bruder knew he’d have an opportunity.

“It made me work harder in the off-season, knowing I would have to work for my spot,” he said. “I knew I had to show out.”

And work is exactly what Bruder has done.

Not really one to talk much, Bruder instead put his head down and got after it.

“He’s modest, but I really like how hard he works.”

Bruder was one of the top receivers on Yankton’s junior varsity team last year, with 15 catches for 216 yards.

He’s now one of many current varsity players in the same boat: Emerging on the varsity level.

Being with his teammates is what drives Bruder, he said Monday.

“Whatever I’m doing, they’re doing it too,” he added. “We’re all doing it together.”

Possessing ideal height for a tight end, Bruder’s role within the offense is crucial, according to his coach.

“For our offense, the tight end is really important,” Muth said.

Like Michael Drotzmann did last year, Bruder is in a position where he does things that sometimes don’t show up in statistics. For example, he’ll draw attention of a safety or a linebacker so someone else can get open, or he’ll block those defenders on a run play.

It’s the same things that someone like former Yankton standout Evan Greeneway also did, Muth pointed out.

“I’m not saying he’s (Bruder) Evan Greeneway or will get to where Evan is, but the amount of work Reggie has put in reminds me a lot of Evan,” Muth said.

And so it’s no surprise that Bruder has already made a difference at the varsity level, Muth added.

“We’ve been telling Reggie for a while he’s going to be special, and I think he’s starting to believe it now,” Muth said.

Bruder and the Bucks will travel to top-ranked Pierre on Friday. Kickoff is set for 7 p.m. in the capitol city.