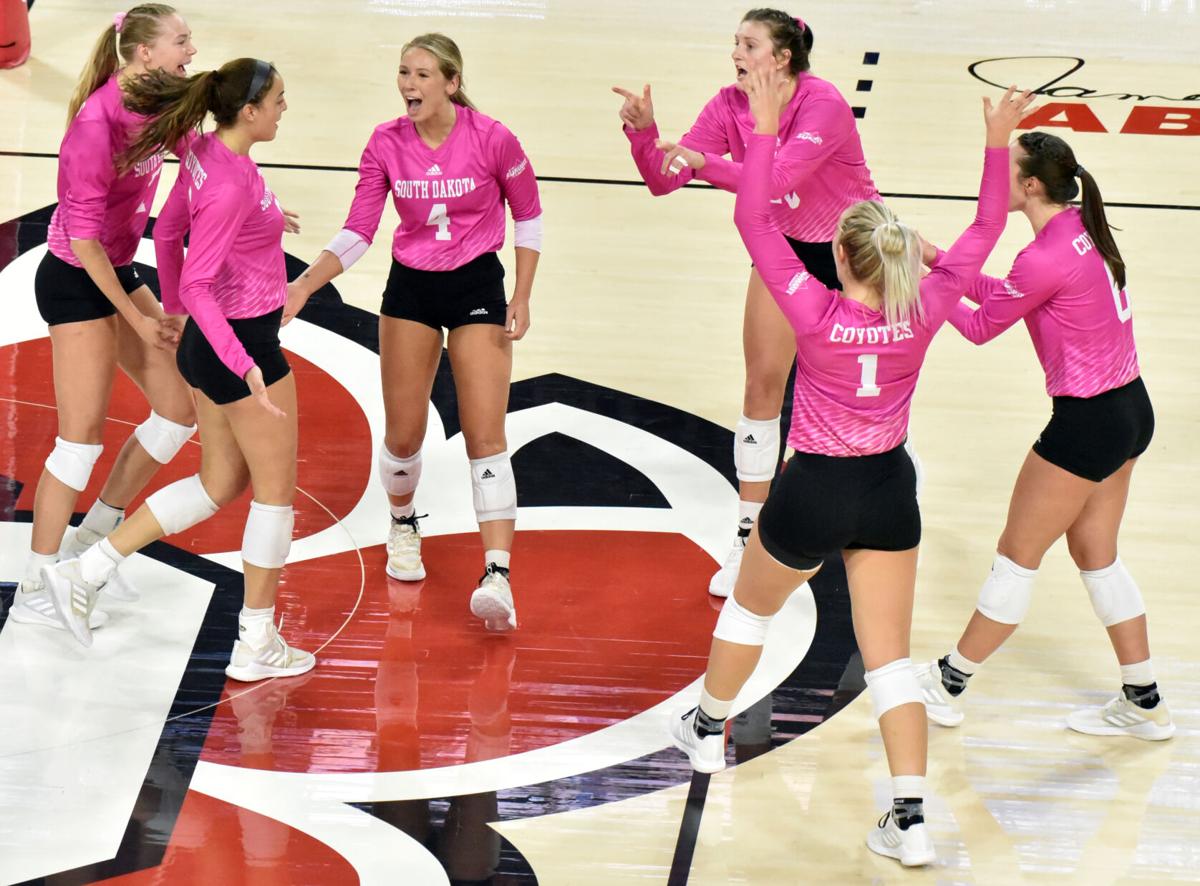 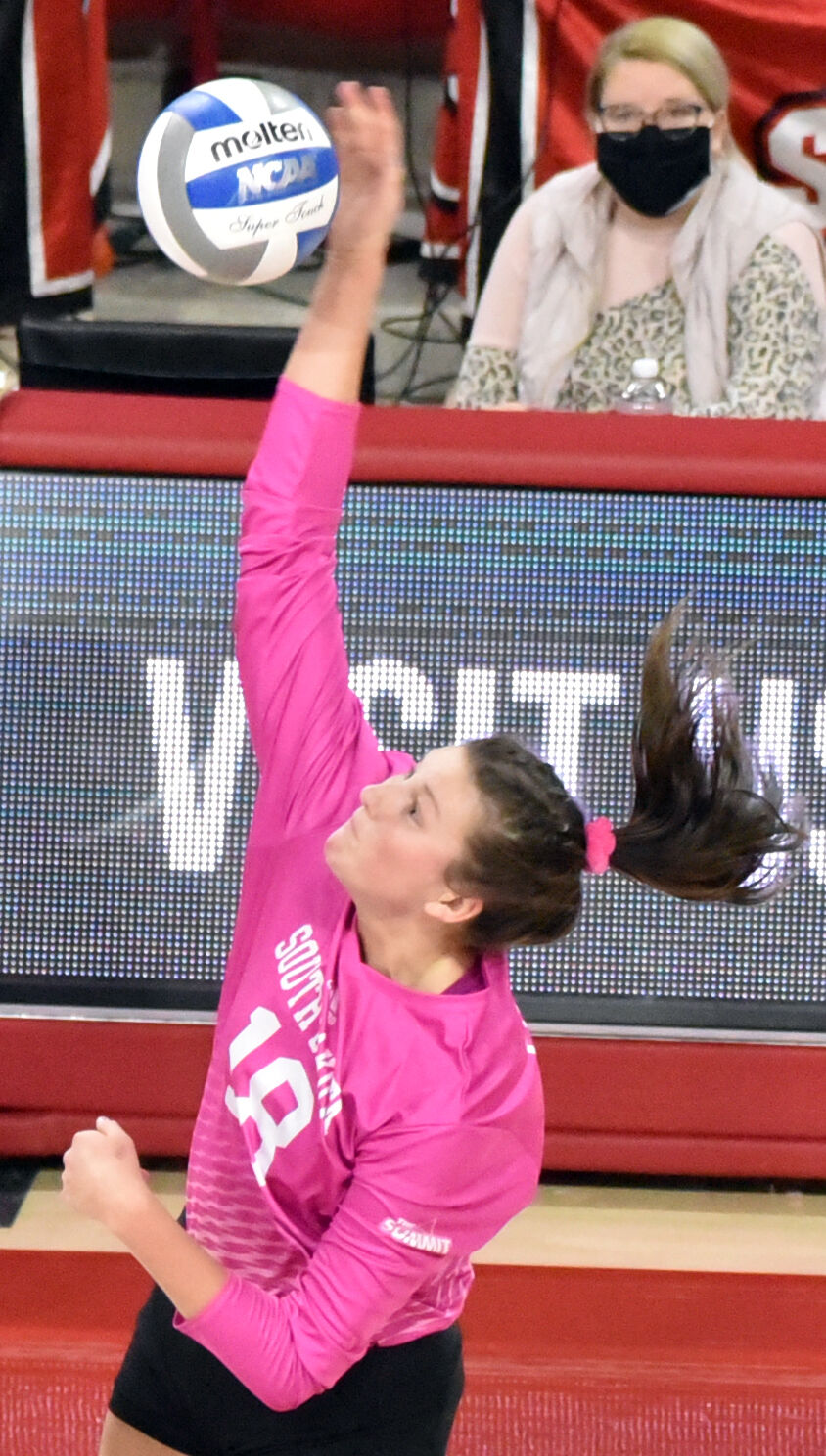 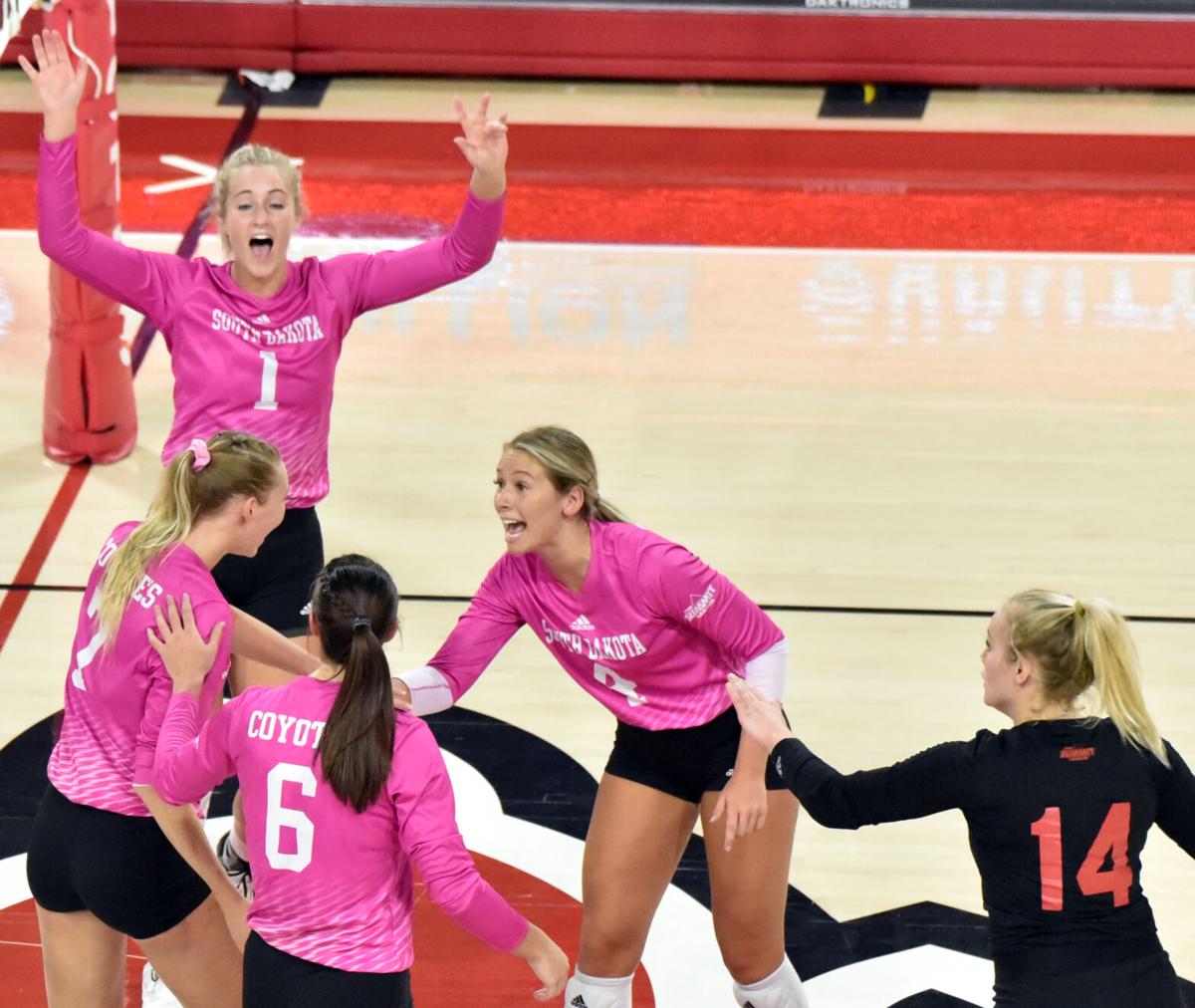 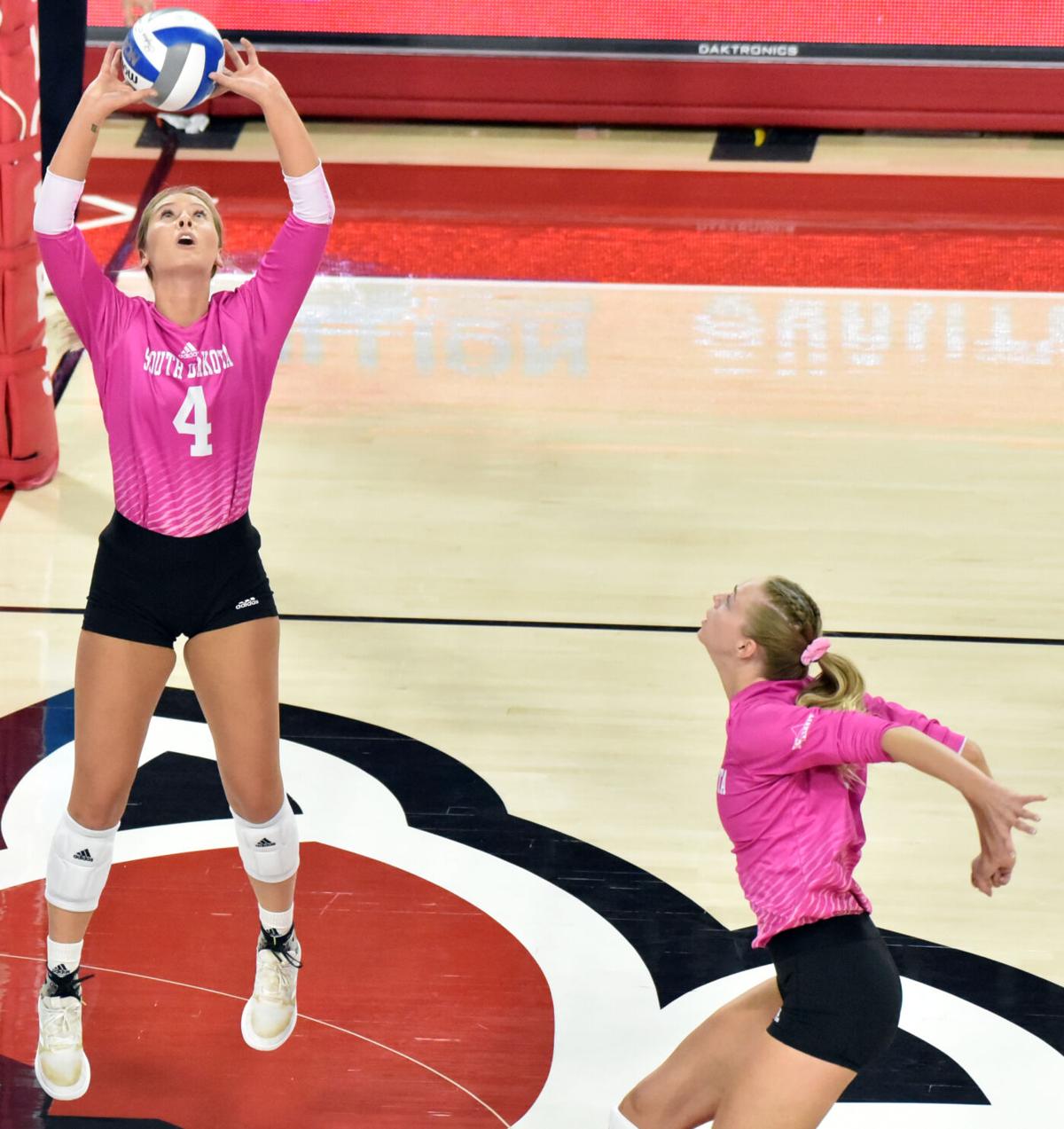 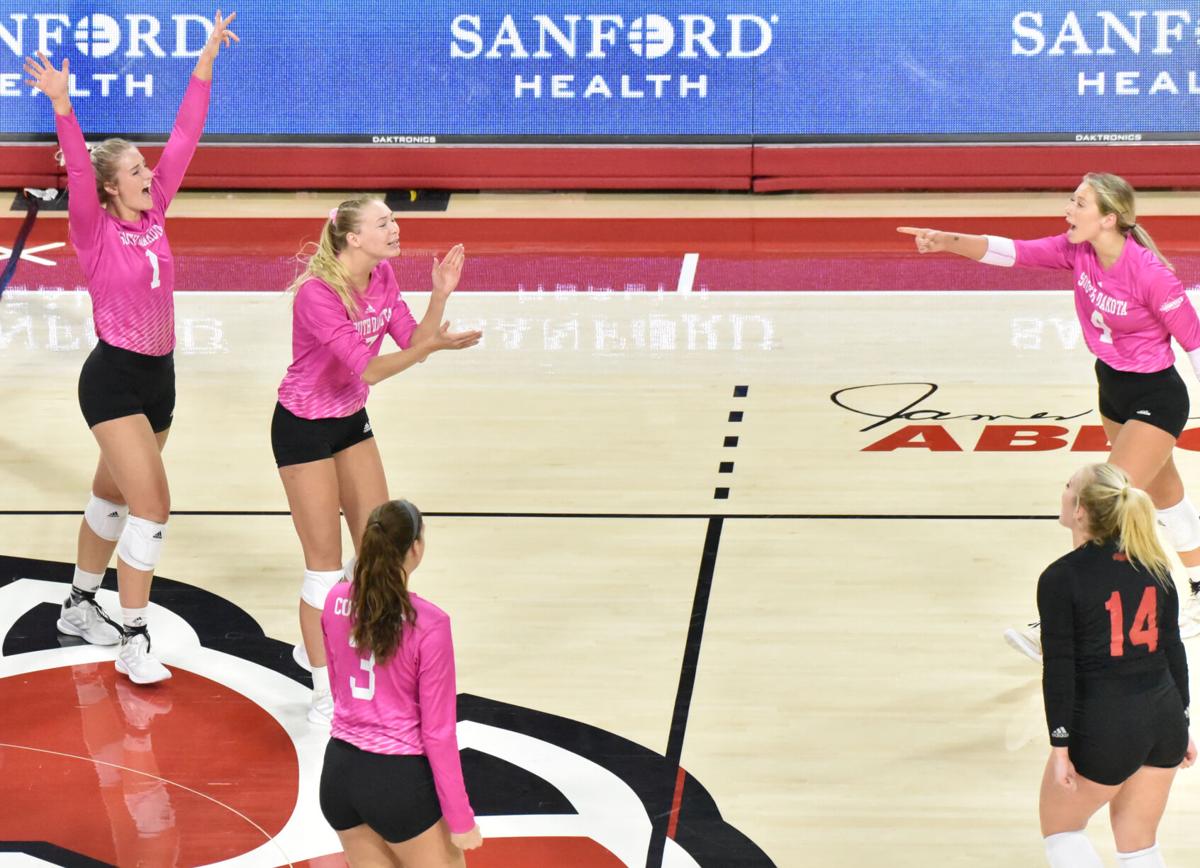 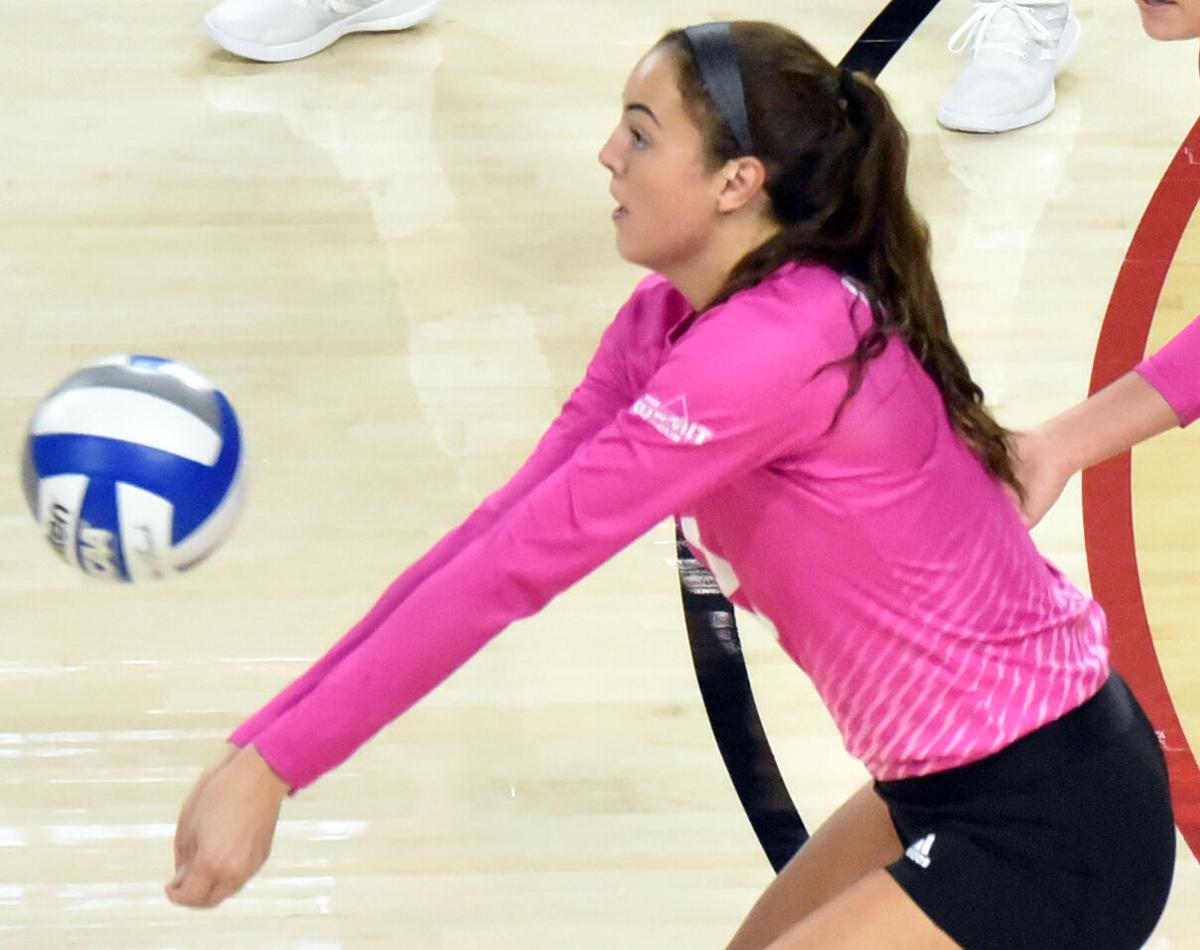 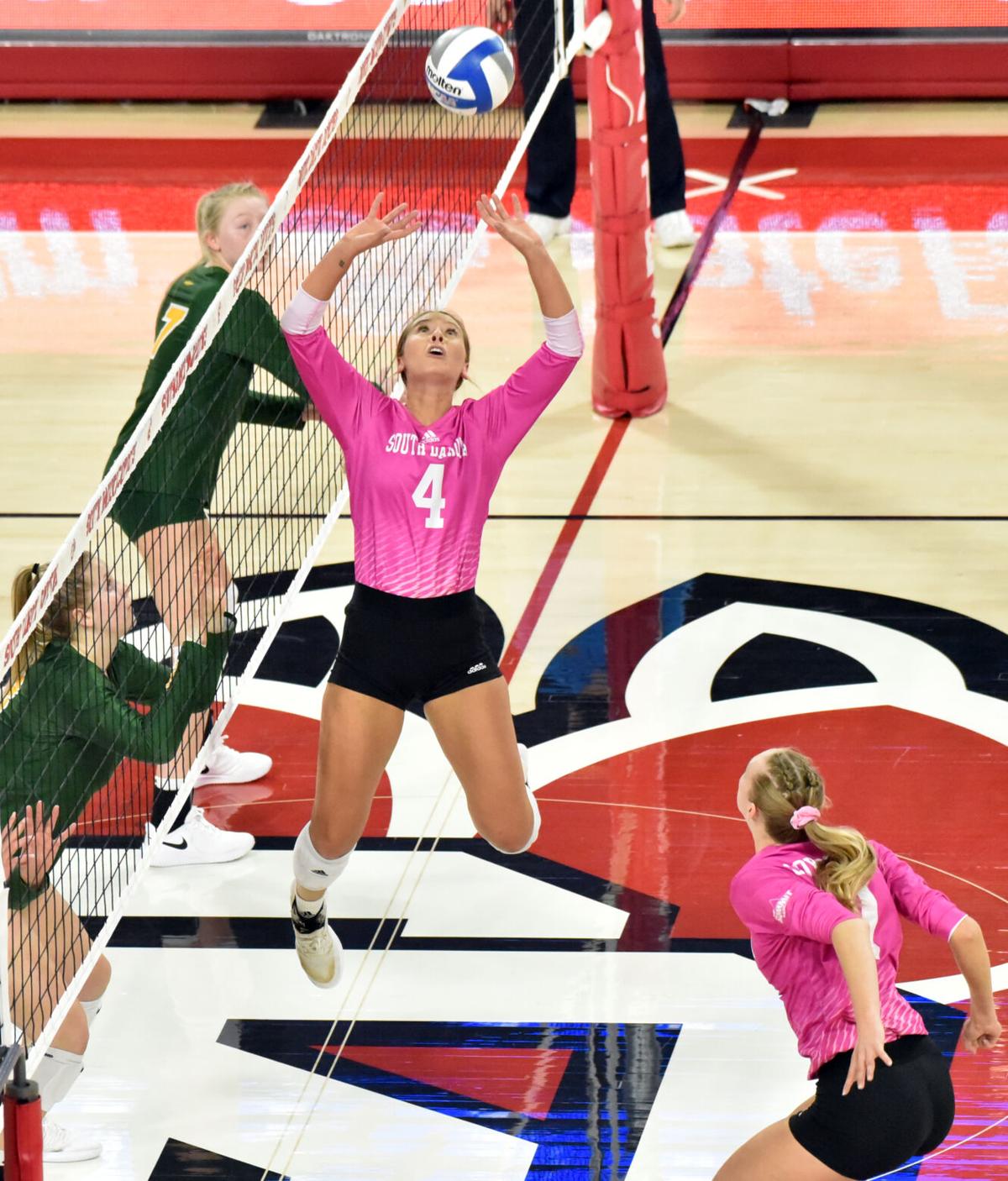 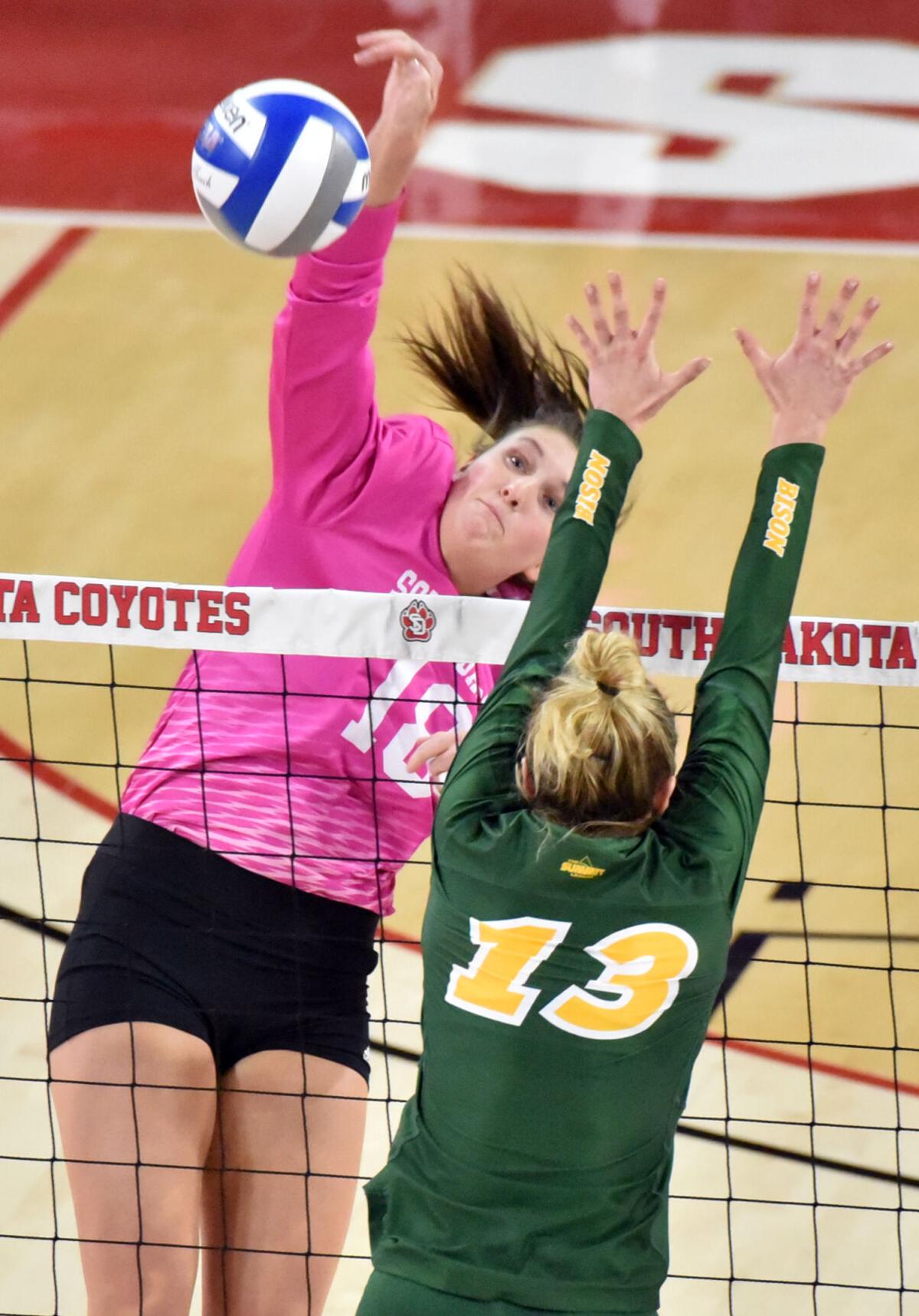 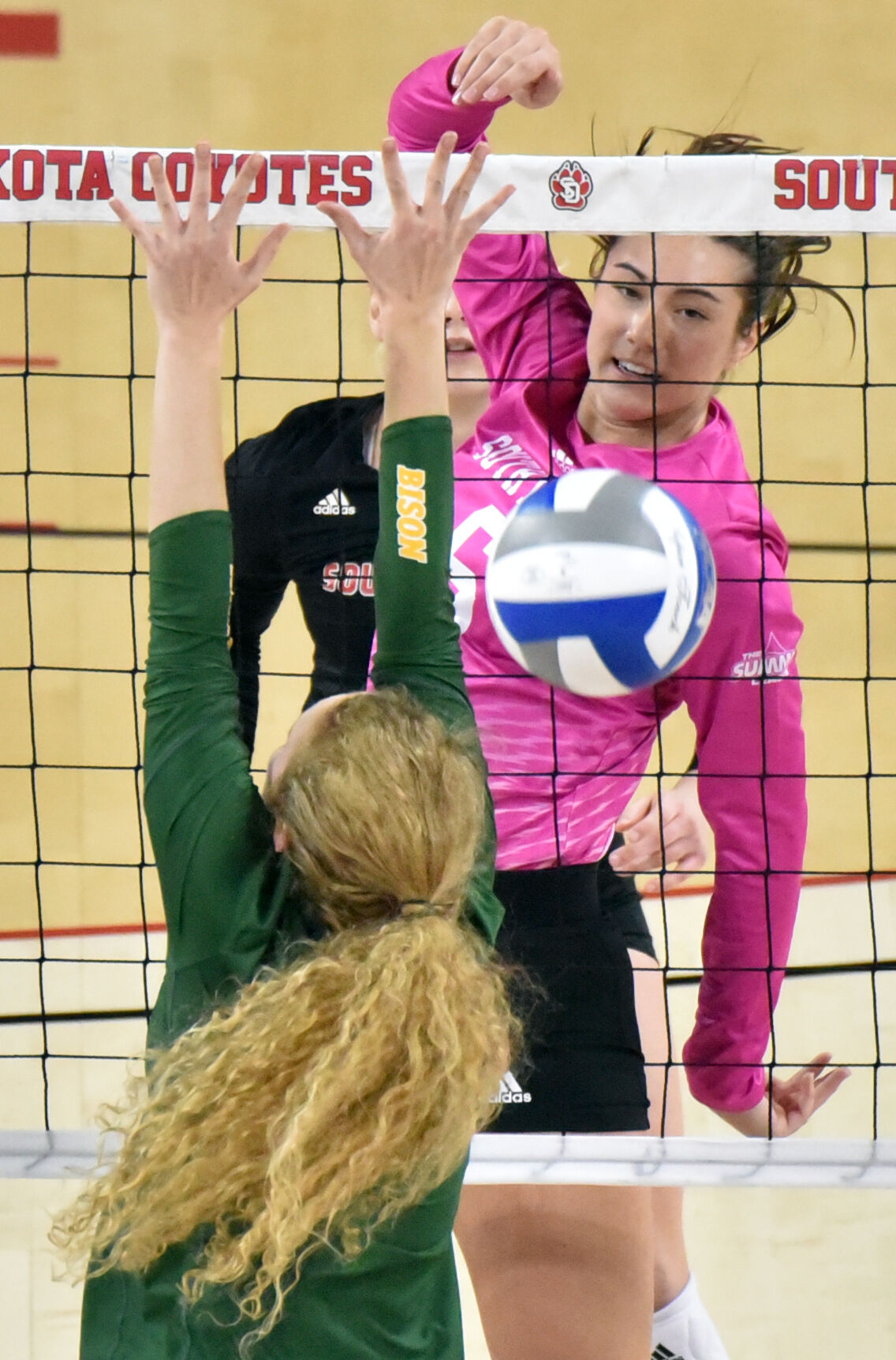 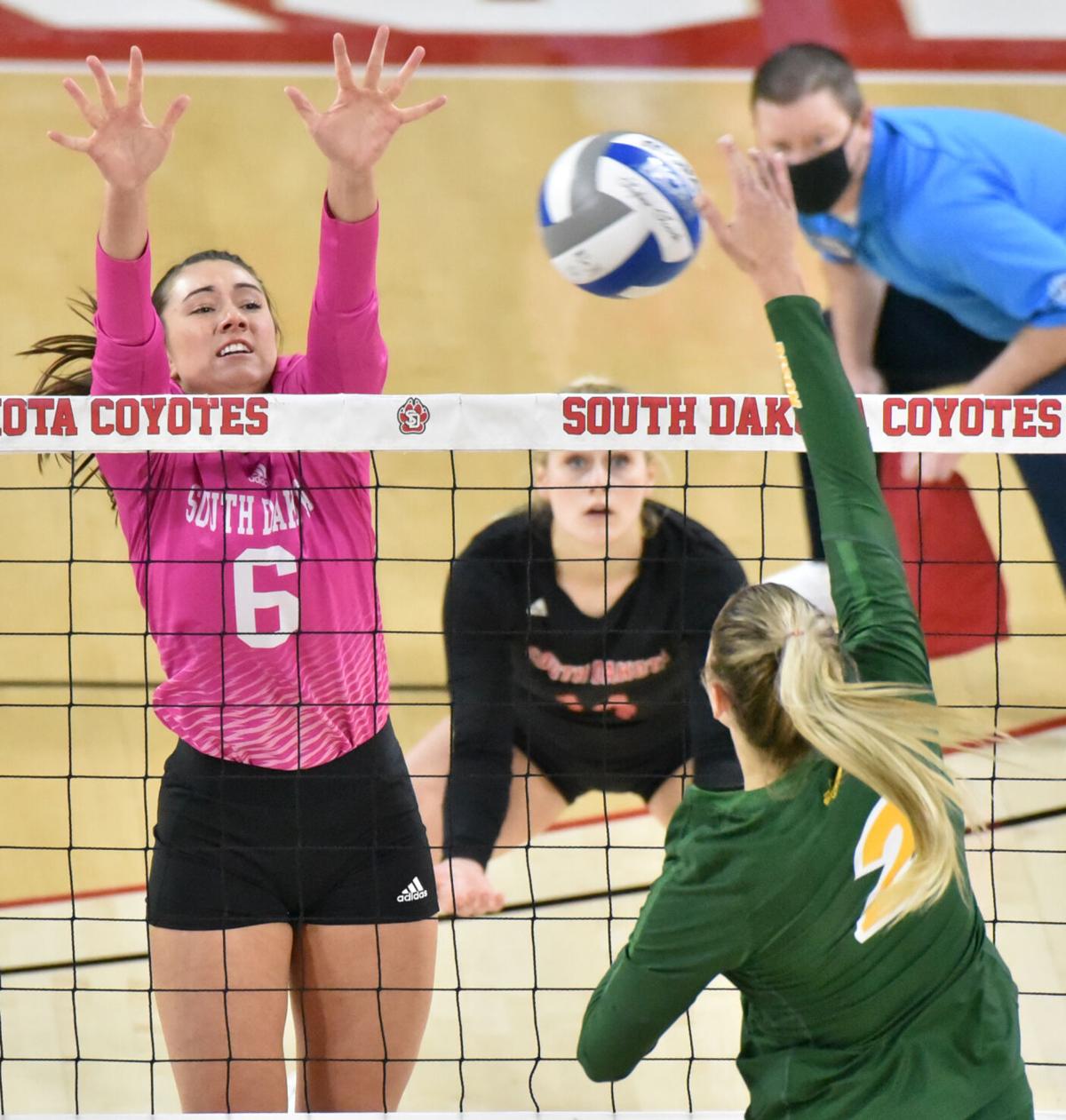 South Dakota's Elizabeth Juhnke goes up for a block against North Dakota State's Allie Mauch during their Summit League volleyball match on Sunday at the Sanford Coyote Sports Center. 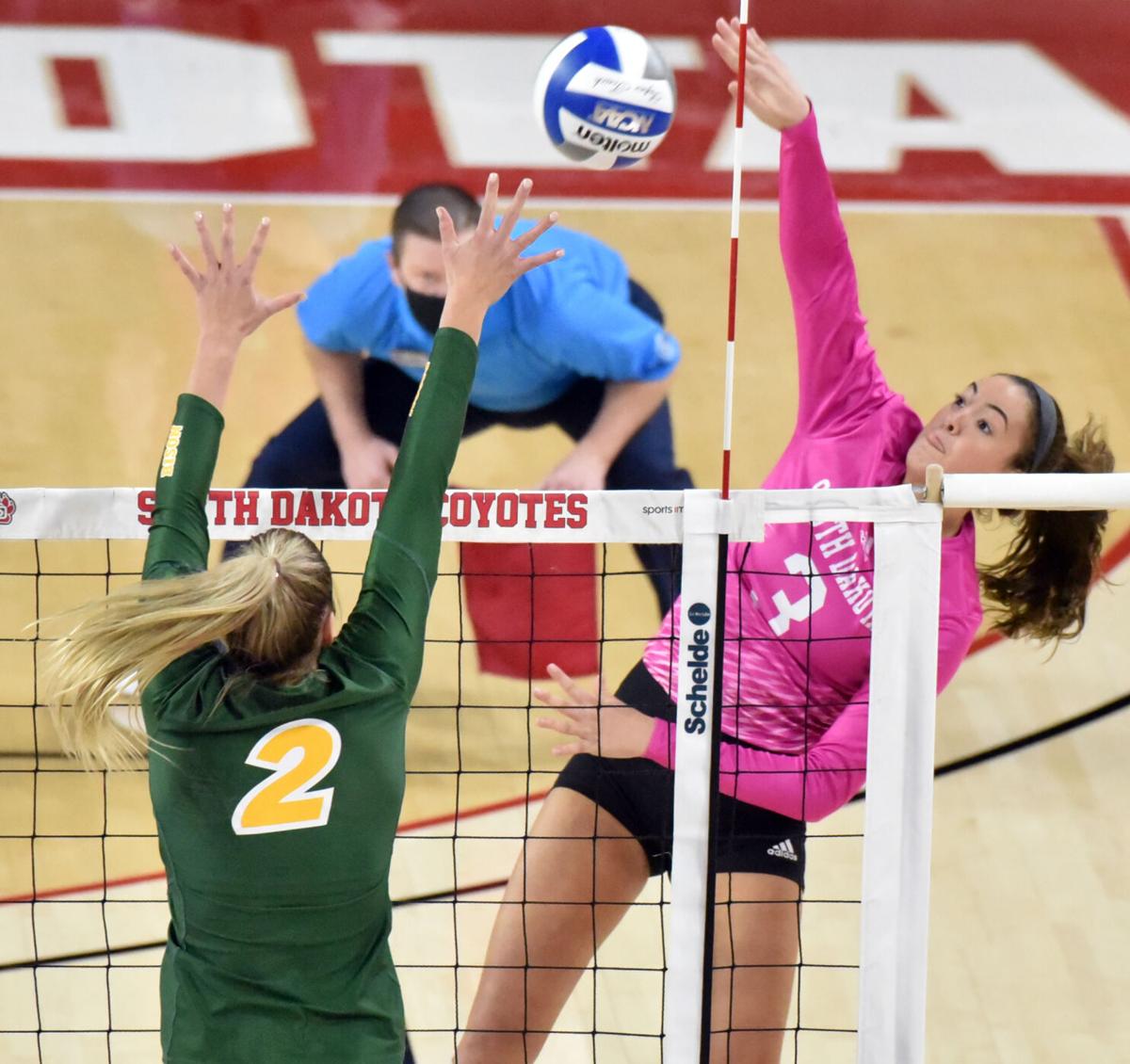 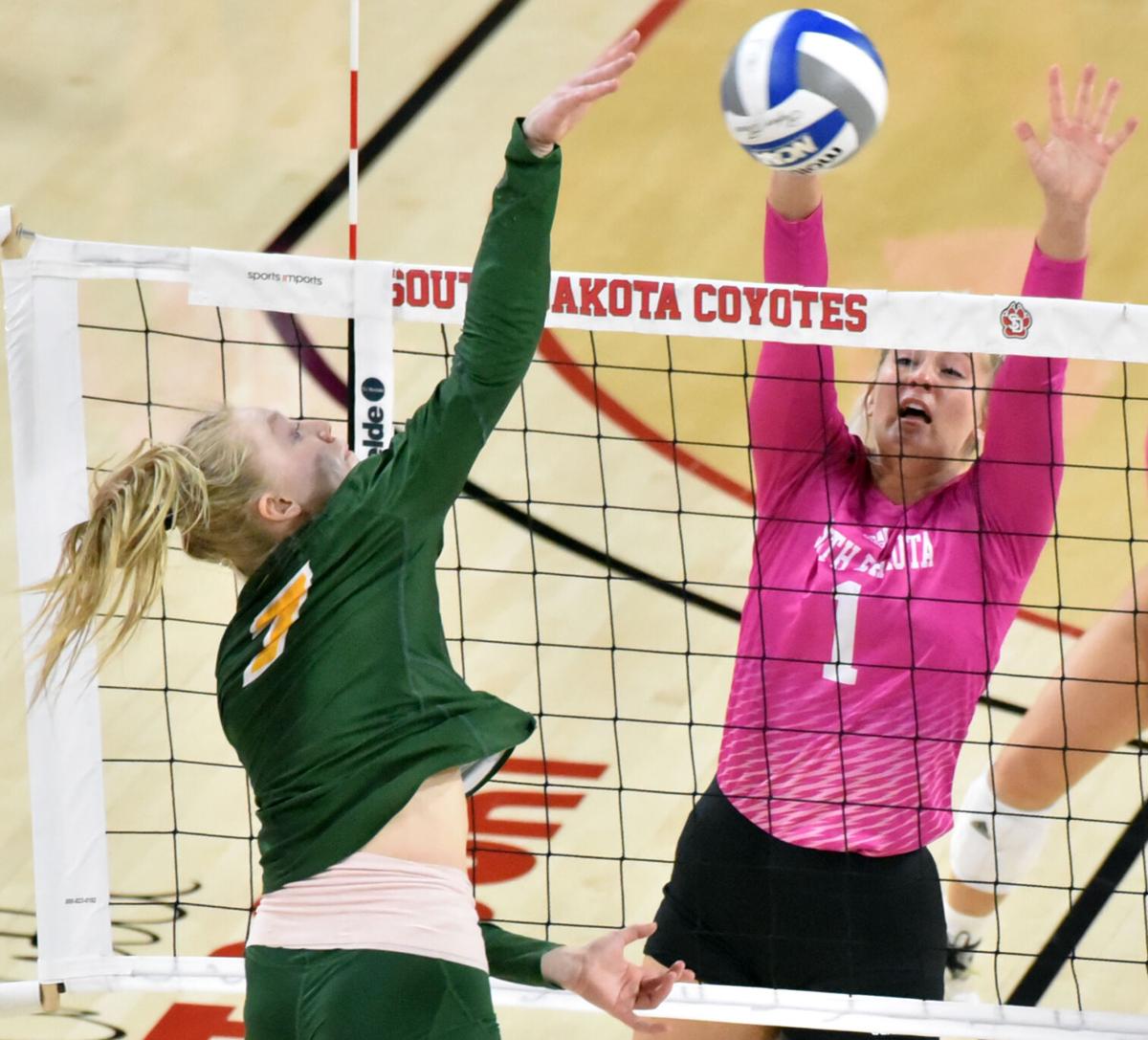 South Dakota's Aimee Adams goes up for a block against North Dakota State's Ali Hinze during their Summit League volleyball match on Sunday at the Sanford Coyote Sports Center. 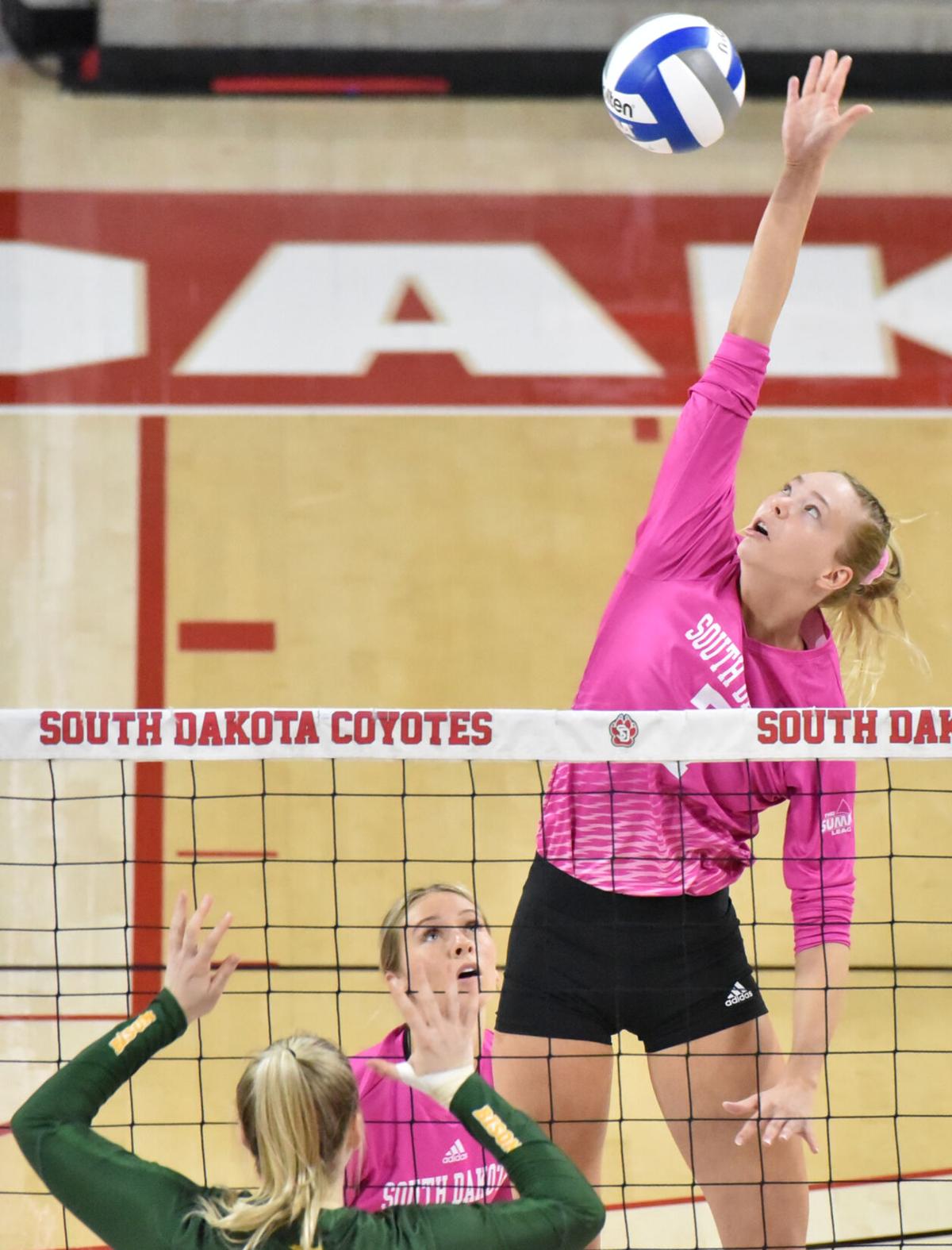 South Dakota's Elizabeth Juhnke goes up for a block against North Dakota State's Allie Mauch during their Summit League volleyball match on Sunday at the Sanford Coyote Sports Center.

South Dakota's Aimee Adams goes up for a block against North Dakota State's Ali Hinze during their Summit League volleyball match on Sunday at the Sanford Coyote Sports Center.

VERMILLION- The NCAA added challenges to volleyball prior to the 2020-2021 season, and Leanne Williamson utilizes one to win the fourth set and take the match 3-1 over North Dakota State Sunday night in the Sanford Coyote Sports Center.

“I think they've (the refs) done a good job this year of calling good games and then we as coaches were able to use those challenges to hopefully correct some of the random ones that that they miss, like that out call at the end,” USD head coach Leanne Williamson said.

The Coyotes rallied in the fourth set, trailing 23-19, evening the score at 24. The Coyotes got to a match point leading 25-24, before NDSU answered. USD got their second match point of the set and third of the game leading 26-25.

Maddie Wiedenfeld’s serve was originally called out long, but Leanne Williamson and the Coyotes had nothing to lose by challenging the call. The refs went to the monitor, and overturned the call, giving the Coyotes the set 27-25 and the match 3-1.

“I think that fourth set really just came down to like the 19-23 after that we just kind of went with our backs against the wall,” Madison Jurgens said. “We just thought we just got to play all out on every point and I think we did that. I think there were times, we went rollercoaster a little bit but there's consistency in there somewhere and we're looking to find that tomorrow.” The Coyotes won the first two sets 26-24 and 25-19 to hold a 2-0 lead headed into the third set. USD got match point at 24-23 in the third set, but NDSU rattled off three straight points to take the third set 26-24, setting up the thrilling fourth.

“In the fourth set, I think that's when we started to have the mentality of having fun,” Lolo Weideman said. “I think we got a little bit jittery there in the third set and got more tense than we normally do. And when we have fun we play well so we really try to switch our mindset there.”

“She has been very intentful this last week and really the last few weeks are really trying to, she would say fix her block, and yet obviously last week she was Defensive Player of the Week with her blocking,” Williamson said. “She's just a very hard worker. She wants to continue to get better and she knows that there's a couple things that she can still improve on in order to help not only herself get more blocks and it's not always about the block number, but to take away the space that she's supposed to.”

The Coyotes and Bison are back in action Monday night at 6 p.m. in the Sanford Coyote Sports Center. Last weekend the Coyotes picked up a win Sunday, but lost Monday. Williamson look to prevent a repeat of that Monday.

“I think we learned our lesson from last weekend,” Jurgens said. “That's just a mentality that we have to get used to. And I think we know when we get into that second day of playing there's more fatigue involved, which means we just have to be more disciplined and I think we know that going into tomorrow and it's a good opportunity to change from what happened last weekend.”