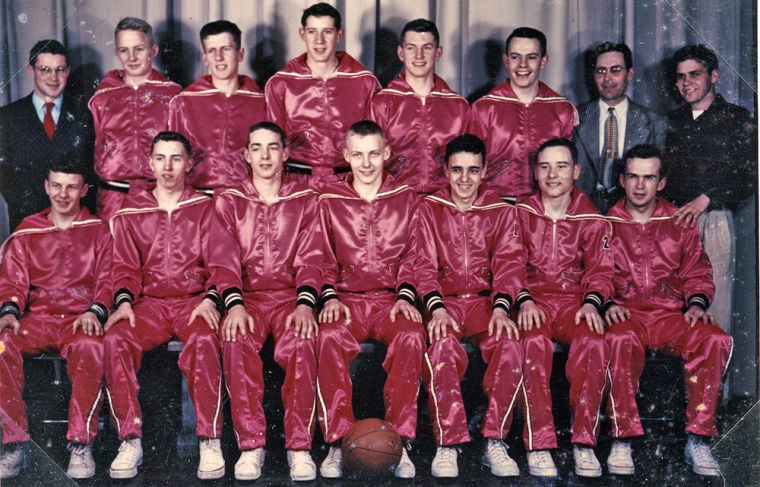 The 1949-50 Yankton Bucks boys’ basketball team, coached by Dwane Clodfelter (back row, second from right). Clodfelter went on to coach the University of South Dakota men to a NCAA Division II national championship in 1957-58. 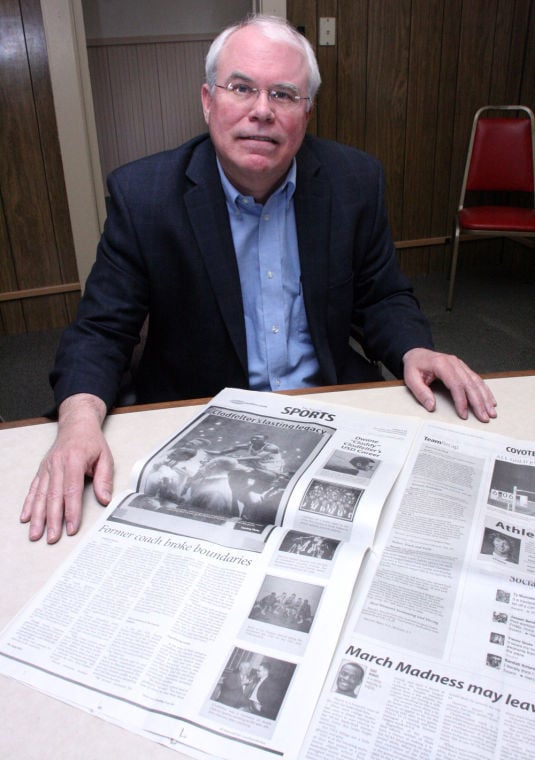 Kim Clodfelter, Dwane’s son, was in Yankton recently researching a book that he is doing on his father.

The 1949-50 Yankton Bucks boys’ basketball team, coached by Dwane Clodfelter (back row, second from right). Clodfelter went on to coach the University of South Dakota men to a NCAA Division II national championship in 1957-58.

Kim Clodfelter, Dwane’s son, was in Yankton recently researching a book that he is doing on his father.

Among the well-known coaches to have spent time and found success in Yankton is one who graced this town for only 10 months over 60 years ago.

The nickname says it all.

Victor “Dwane” Clodfelter, a former high school and collegiate coach who later won a small school national basketball title at the University of South Dakota and passed away in 2006, is the subject of a forthcoming biography by his son, Kim.

The full story of “Cloddy” is not complete without the inclusion of his one year, 1949-50, as football, basketball and track coach at Yankton High School, according to former Bucks standout Don St. Clair.

“That was a magical one year with him,” said St. Clair, a 1950 YHS graduate who himself later became a successful basketball coach in California, where he resides.

“It wasn’t even a full year, but we were so fortunate that we were around when he came to Yankton.”

Notable for his soft-spoken but motivating style, Dwane Clodfelter arrived in Yankton in August 1949 and within three months, had guided the Bucks to their first Eastern South Dakota Conference (ESD) football title in eight years.

The following March, his YHS basketball team — well-known since for its pink warm-up jerseys during the post-season — qualified for the State Class A Tournament. For good measure, the Bucks took fourth place at the state track meet.

By June 1950, Clodfelter was gone, headed to Huron High School.

His brief stay in Yankton, though, meant quite a bit to his father, according to Kim, whose biography — appropriately entitled “Cloddy” — does yet not have a publisher.

“The bottom line is, he enjoyed his year here,” Kim said during a stop to the Press & Dakotan last week. “He met some people who became lifelong friends.”

Saying he wanted to “write about the high school years and move on from there,” Kim said his research path has taken him down new roads.

“I’m finding out so much more to this story,” Kim said.

Taking the job in Centerville at age 25, Clodfelter soon found that the school only had a dirt track. A plea to the superintendent for funding didn’t work, so Clodfelter was able to wrangle some cinder blocks and cement.

“He went into the study hall and took the boys out and put them to work with shovels and wheelbarrows,” Kim said. “It took three of them to pull the cement compactor, but they got it done.”

The manual labor paid off, as the Tornadoes won a pair of Class B state track titles.

Though success seemed to eventually develop wherever he went, Clodfelter inherited a Yankton football program in 1949 that had been rather talented under former coach Bob Burns. The Bucks were 8-2 in 1947 and 8-1-1 the following year.

“He came in there with not a lot of expectations,” St. Clair, the team’s left guard, said. “Coach Burns had been at Yankton and had two very good teams before that.”

Burns left in 1949 for Sioux Falls Washington High School, and as St. Clair says, “It didn’t look like the Bucks would be nearly as good as the previous two, but we surprised everybody.”

Yankton was dealt an early blow that fall, however, as two cases of polio in town delayed the football team’s pre-season conditioning. A few days later, the team returned to the field together and got an early glimpse of their new coach.

“Here was this very quiet, English-looking professor,” St. Clair said. “He was so soft-spoken. We were used to having Bob Burns, who looked like a football player and was a golden gloves boxer. Cloddy was just the opposite.”

The team’s debut under Clodfelter was rather anticlimactic, as the Bucks dropped a 13-0 game at Sioux City (Iowa) East in a torrential rain storm. Many of the players suffered burns on their face, arms and hands because of an acid-based chalk that was lining the field that night, St. Clair said.

As the season progressed and the players got to spend more time around their coach, both in the YHS halls and on the field, they got to see how much of a “psychologist” Clodfelter was, St. Clair said.

The Bucks went on to win five of their next six games, with their only blemish a 6-6 homecoming tie against Mitchell. That set up a Nov. 29, 1949 showdown in Yankton with Aberdeen for the ESD title — a game in which Clodfelter used his psychology prowess.

“The wind was blowing like crazy,” St. Clair said. “He made sure we had the wind with us in that last quarter. We’re down 7-6 and Kaye Andrews (one of Yankton’s captains) quick-kicked on third down and booted it 72 yards.

Ever a coach to surprise his players, Clodfelter found a secret way to reward his players after that ESD championship. Working with the cooperation of parents, the players were surprised to see Greyhound buses parked out front of the Gurney Hotel following a team meal.

“We got on those buses about midnight and drove all night to Minneapolis. The next day we saw Minnesota play Wisconsin,” St. Clair said. “I don’t think anybody slept that entire drive.”

Most of those same players — from St. Clair, to Jim Fleveras, to Bill Kabieseman, to Bob Binder — played key roles in the ensuing basketball season for the Bucks under Clodfelter.

Yankton entered the 4-team sectional tournament with Madison, Sioux Falls and Vermillion at Nash Gymnasium on the Yankton College campus playing “quite good by that point,” St. Clair said.

As was the tradition in those days, the school held a large and festive pep rally to honor the team. Prior, though, Clodfelter called the team down to the locker room for a little pep talk, St. Clair said.

“And by golly, here are these boxes with brand new warm-ups,” he said. “They were a silky pinkish color; something we hadn’t ever really seen before. So we go out there and that place was hollering; everyone loved them.”

For good measure, the Bucks went on to win of three games in the sectional tournament, and eventually finished fifth at the State Class A Tournament in Sioux Falls.

What lives on in local legend, though, is those bright pink jerseys — bright enough to appear as if they were glowing under fluorescent light.

One of the original jerseys still hangs in the trophy case at YHS, and according to Jim Robinson, a 1961 YHS graduate, that particular one belonged to Wayne Pasco, a freshman during the 1949-50 season.

“I found it buried somewhere in the high school, and I said, ‘I’m keeping that one,’” Robinson said. “Nobody was ever going to wear those again, but they’re unique enough to still show them off.”

“When people come in to the high school and look at that case, they look at the old-time stuff,” Winter said. “That’s what they’re interested in, especially that pink uniform.”

Winter said that during a visit to YHS one year, Hauff remembered exactly what number that particular cloth was, and that similar bright green jerseys were shipped to Winner High School.

“He said those were the only two sets of the fluorescent colors he sold,” Winter said.

Though they were worn for only a short period of time, the bright color lives on, according to Kim Clodfelter. Talking about those warm-ups, Kim said, “Dad liked flash.”

“Dad was good at getting into booster’s pockets,” Kim added, smiling.

He was also a kind of prognosticator. Clodfelter had purchased the jerseys before post-season play and bet quite a lot that his team would advance to the state tournament, according to Kabieseman — a junior on those Clodfelter teams.

“He must’ve just expected us to get to state,” said Kabieseman, a 1951 YHS graduate who still lives in Yankton. Kabieseman later spent 41 years as a science and math teacher at USD, where he once had Kim Clodfelter in a class.

“Those things really stood out; they took the state by surprise.”

In those 10 months in Yankton, Clodfelter left a lasting impression on his players.

The way Kabieseman and St. Clair both put it, Clodfelter was a master at psychology.

“One of the things that stands out was is sense of humor,” Kabieseman said. “He had a lot of psychology when he coached. He got you revved up, and you really never knew why.”

There were times, though, when the coach pushed his players; a kind of tough love that produced results, his son said.

“He was pretty tough,” Kim said. “You went by the rules or you don’t play. He once kicked an all-conference kid off the team in Centerville; he could be rough, but I think his players respected him for that.”

For all the tough love, Clodfelter was also known as a good motivator, his son said.

Years later at a Yankton football reunion, a story was related by St. Clair that before a key game against Aberdeen, Clodfelter took him on a walk around the block to motivate him — “to let him know the team, personally, really needed him to step up,” Kim says.

Well, as the story goes, other players chimed in to say, “He did that for you too?”

Later, during his stint at USD, Clodfelter was invited to a coaching clinic in California, where St. Clair was establishing himself as a successful coach.

“We’re sitting there in the bleachers, and out comes this fella. I told myself, ‘He reminds me of Cloddy,’” St. Clair said. “He starts talking about the pyramid of success, and not many people really knew who he was.”

That coach? John Wooden from UCLA.

“I asked him if he ever met Dwane Clodfelter from the University of South Dakota, and he says, ‘Cloddy? Oh yeah, I’ve served on some committees with him,’” St. Clair said. “Ironically, they knew each other.”

Those are the kinds of stories likely to reach his biography, written by his son.

Though he doesn’t have a publisher for his book yet, Kim said that by the time he finishes it — within 12-18 months, he estimates — he will have conducted over 100 taped interviews.

Still, there is work to be done and stories to be shared.

“If word gets out for the book, it helps me and makes for a better book,” Kim said. “Dad’s stomping grounds are in this area, and I’m sure people remember his teams.”

To reach Clodfelter with stories about his father or other relevant information, Kim welcomes emails to kimclodfelter@gmail.com.