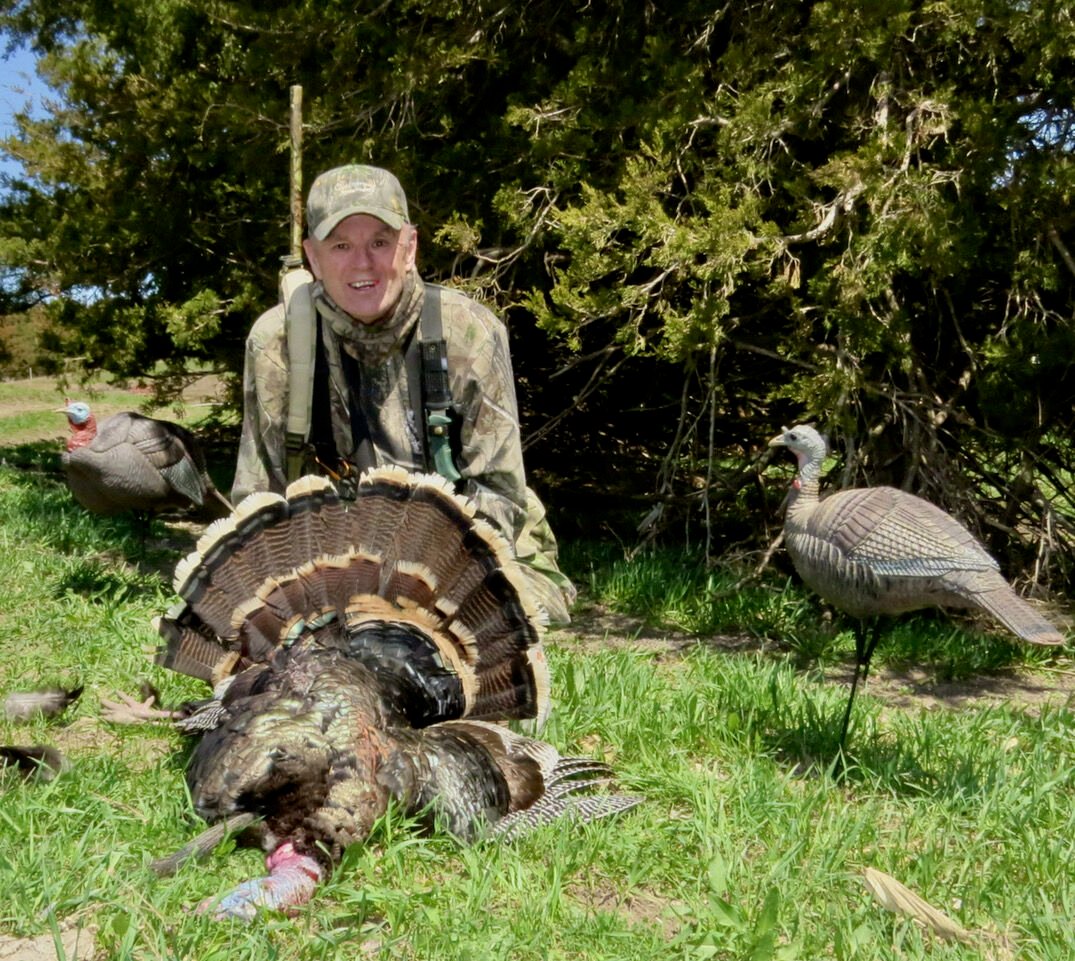 This tom fell to my shotgun during a late morning hunt in the hills of northeast Nebraska not far from my home in Hartington. 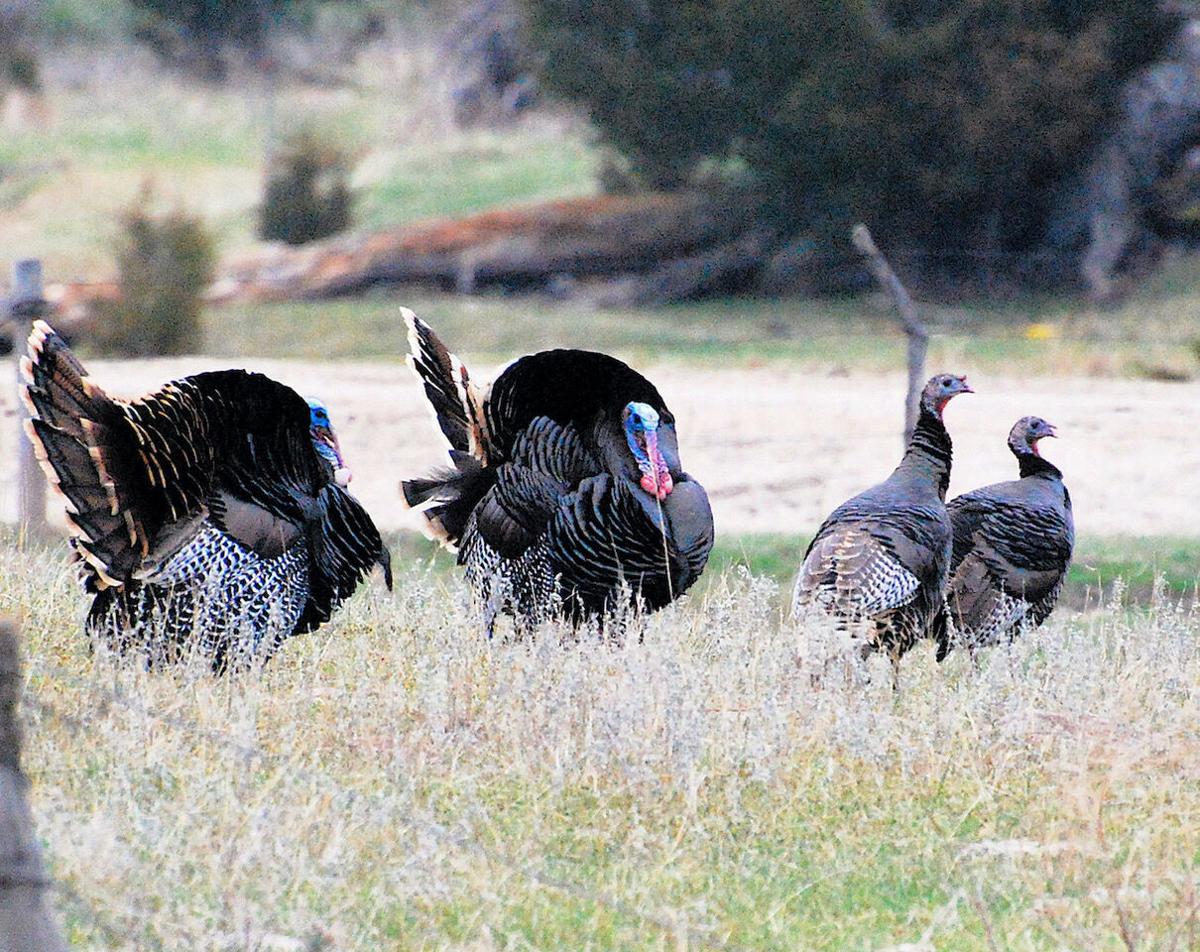 When toms are strutting with hens they will be very difficult, if not impossible, to call to your position. But, there are some things you can do to put the odds on your side.

This tom fell to my shotgun during a late morning hunt in the hills of northeast Nebraska not far from my home in Hartington.

When toms are strutting with hens they will be very difficult, if not impossible, to call to your position. But, there are some things you can do to put the odds on your side.

It’s “0 dark 30” and you’re standing on a wooded ridge in turkey country. Suddenly, far away, on another ridge you hear a faint gobble. Your heart picks up a beat. The turkeys are finally waking up.

The gobble is encouraging, but it’s too far away for you to begin a hunt. Then, another gobble blasts away the morning darkness. You almost jump out of your camo. Your heart begins to sound like someone beating on a brass drum. This gobbler is close. Maybe too close. You drop down to the base of the tree you were leaning on. And wait.

This isn’t your first rodeo. You’ve long ago learned never to stand just anywhere in the turkey woods. You always look for something to sit down against in case a gobbler surprises you. A close-in gobbler is no time to be stumbling around looking for a place to set up.

Now you wait. And try to still your pounding heart.

More gobbles in the far ridge. That sets “your” gobbler on fire. He answers loud and clear.

The gobbling exchange continues for several more minutes. The night has moved into what poets call the grey light of dawn. There’s a blush of orange on the eastern skyline and the woods are lighting up with each minute.

It’s time to let “your” gobbler know you, a 200 pound hen, are nearby and willing. You scratch out a few weak tree yelps on your slate, hoping it sounds like a 12 pound willing hen. It’s answered by thunderous gobbles from “your“ bird. So, you wait. He knows you are here. Hopefully, he will fly down and come over and say, “Good morning.”

Yet another busted dawn hunt.

A high population of turkeys, which we are experiencing in most places at the present time, is both a blessing and a curse. With lots of birds, Toms are rarely without hens. And they really do rely on the old adage, “A bird in the hand is worth two in the bush.”

So, what can you do if fly-down toms aren’t interested.

If you hear an old boss hen yelping her heart out, trying to tell the others what to do, answer her. Step on her yelps. Get into an argument with her. Challenge her. Turkeys, toms and hens, are always willing to fight. Old boss hens are more than ready to put the fix on a young upstart and with any luck at all, she’ll come looking for you.

And guess what. That big, old tom will follow right along like a dog on a leash.

But what if the hens aren’t vocal. Then you have to be. Begin yelping like a hen on steroids. And keep it up. That tom just might come looking. This is a good tactic on Merriams and hybrids. Not so much on Easterns. But, what do you have to lose. Try it.

There is one other option. That’s to try to circle around and get in front of the group of birds. Easier said than done unless you routinely win marathons. You might have a chance if you’ve done your scouting and know where the birds are heading.

That brings us to another subject. Scouting. Few of us have the time to scout properly. It requires getting on your hunting property right at dark and finding where the toms are roosting. Prowling around the woods after the birds fly up and using shock gobbling techniques such as owl calls or coyote howls will cause the toms to gobble and give their location away. Next morning get out there early and see where they go to feed and strut. Now you know where they go.

When you set up at dawn on opening day, set up on their path to the fields. Of course that only works if the birds are roosting in the same area night after night. As a general rule, turkeys will use the same roosting sites year after year. However, there are a lot of extenuating circumstances. Not the least of which is the availability of other suitable roosting trees. Hunting pressure or farming activities can also cause them to change locations. There are no sure things in turkey hunting.

Twenty years ago that’s how just about everybody hunted turkeys. In the woods an hour before dawn and take your chances. Today? Not so much.

“It used to be the toms roosted separate from the hens and jakes,” he says. “But somewhere along the line, something changed. Now it seems they all roost together. Maybe it’s just because there are more turkeys. So that dawn hunt is a lot more difficult.

“Most of the hunters I know are heading into the woods about 10 a.m. and leaving about 3 p.m.” he continues. “As the season progresses, more hens are leaving the toms to lay an egg in their nest so a tom might find himself alone late morning or early afternoon. A lone tom will come running to a mid-day call.

“I’ve adopted the same procedure in my hunting,” he says. “I rarely go out in the dark anymore. However, I do miss that. Some of my best turkey hunting memories are not about harvesting toms, but about what occurred in the darkness, the sounds of coyotes howling, the owl calls, the crashing through the underbrush by something startled by your arrival. Listening and watching while the woods wake up.”

So you head out late morning. What are you looking for?Turkeys like to strut in open fields, but they will be close to cover so they can cut and run if danger approaches. When hunting you should stay in the cover of the woods. Occasionally, give a yelp on one of your calls. When you stop to call, do so by a tree where you can sit down immediately if a gobbler lights up close in. The first yelps should be a relatively quiet series. Listen for a gobble. If nothing, yelp again only this time louder. If you get a gobble, sit down and wait. Get your gun up on your knee and get comfortable. After a few minutes, yelp again (using a diaphragm call unless you can conceal the movement of your hands with the box or slate).

If he gobbles again and sounds closer, you’ll very likely close the deal.

Lone gobblers will likely not be in an open field. They’ll be stalking though the woods looking for another hen. It’s not unusual for mid-day gobblers to go silent, so you can’t entirely depend on a gobble. That’s what makes turkey hunting so challenging.

If you are not hearing gobbles, set up in an area with a lot of turkey sign, put out a decoy or not, and give it a half hour or more. How long you set up depends more upon the size of the area you can hunt. A small area might be best to just sit there all day. On large areas you can move around more.

Silent toms usually come in silent. But if they see your decoy, they usually can’t help but gobble. That’s a sound well worth waiting for.

There are no guarantees in turkey hunting. The best you can do is get out there and try. No one ever shot a turkey from the comfort of their living room.

Gary Howey is an award-winning writer, producer, broadcaster, former tournament angler, fishing and hunting guide and in 2017 inducted into the "National Freshwater Fishing Hall of Fame”. He developed and was the Producer-Host for 23 years of his award winning gary Howey’s Outdoorsmen Adventures television series. He’s the Host of the award-winning Outdoor Adventures radio program carried on Classic Hits 106.3, ESPN Sports Radio 1570 in Southeastern South Dakota, KWYR Country 93 AM and Magic 93 FM in Central South Dakota, As well as on KCHE 92.1 FM in Northwest Iowa. If you’re looking for more outdoor information, check out www.GaryHowey'soutdoors.com , and www.outdoorsmenadventures.com, with more information on these Facebook pages, Gary Howey, Gary E Howey, Outdoor Adventure Radio, Outdoorsmen Productions and Team Outdoorsmen Productions. The Outdoor Adventures television show is available on numerous Independent markets, and the MIDCO Sports Network.