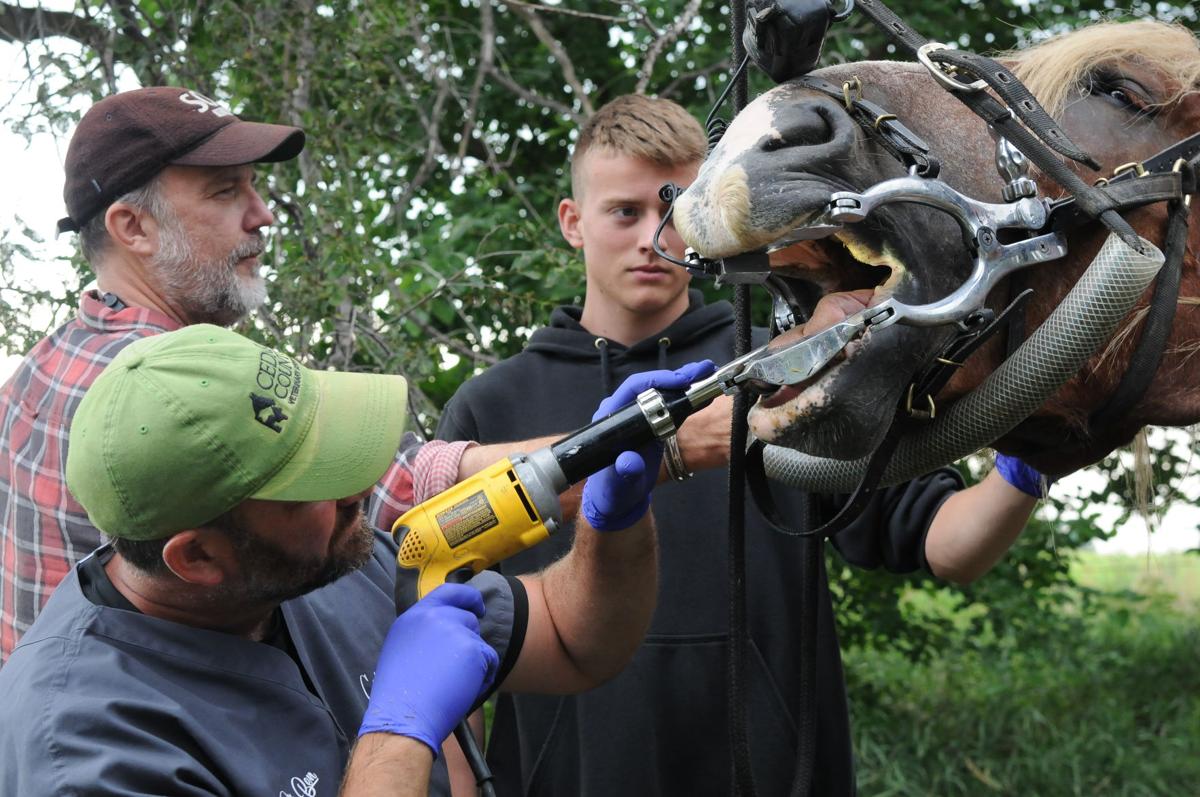 Dane Lawing (left), the crew’s director of photography, moves in for a close shot of Ben Schroeder working on a horse’s teeth with the assistance of son Charlie. 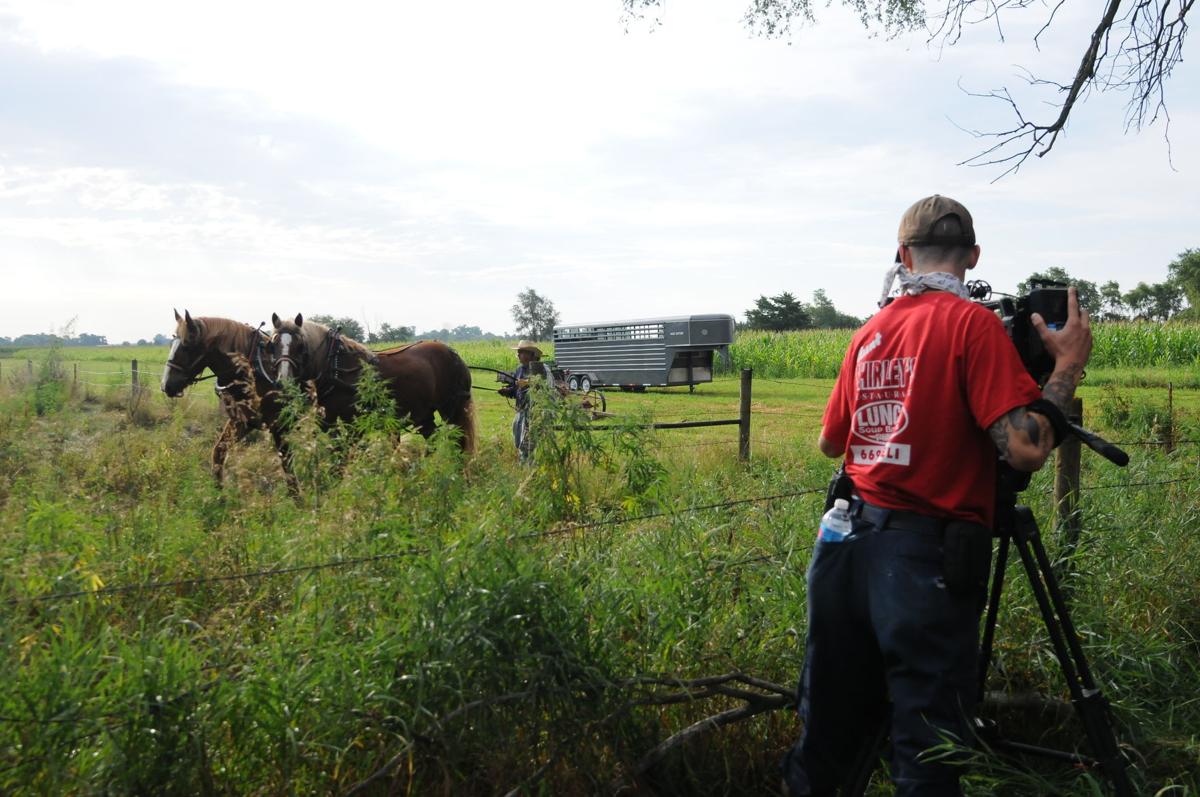 The film crew captures Alan Sorensen with horses as he approaches the area where the horses will receive dental care. Sorensen and his wife, Loretta, have raised horses for 45 years.

Dane Lawing (left), the crew’s director of photography, moves in for a close shot of Ben Schroeder working on a horse’s teeth with the assistance of son Charlie.

The film crew captures Alan Sorensen with horses as he approaches the area where the horses will receive dental care. Sorensen and his wife, Loretta, have raised horses for 45 years.

When it came to his latest veterinary patient, Dr. Ben Schroeder took things straight from the horse’s mouth.

Schroeder and his wife, Dr. Erin Schroeder, form a husband-and-wife team operating the Cedar County Veterinary clinics in Hartington, Nebraska, and Vermillion. This week, they responded to a call from Alan and Loretta Sorensen seeking dental work on their Belgian horses.

The Schroeders didn’t arrive by themselves at the Sorensen farm northeast of Yankton — they came with a film crew in tow. The Glass Entertainment Company crew has been shooting footage of the Schroeders for a National Geographic Wild series.

"It’s been given the working name of ‘Homestead Vets,’ but that could change," said executive producer Matt Carter. "National Geographic Wild has ordered a series of six one-hour shows that are scheduled to start airing in January 2020. We’re hoping — and it’s the hope of every series — that we get picked up for several years."

How did a network learn about the everyday lives of working veterinarians in northeast Nebraska?

Actually, the initial contact didn’t necessary arise because of the animal care, Ben Schroeder said. The networks were intrigued by the couple’s other business project.

"We had purchased and were restoring the Hartington Hotel. We were featured in an article in the Omaha World Herald," he said. "It was a story about two extremely busy veterinarians who were remodeling a historic hotel."

The World Herald story caught the attention of television networks. However, the networks’ interest didn’t necessarily focus on Schroeders’ work as veterinarians.

The Home and Garden Television (HGTV) network would have continued the refurbishing angle, Ben said.

"There had been a pitch to HGTV to remodel our vet clinic. I just said, ‘No, we don’t want to do anything like that. How about something to do with our vet life?’" he said. "The idea was pitched to National Geographic Wild. They loved us, and they ordered six episodes."

Carter emphasized from the outset that the series, while entertaining, would remain informative and respectful of the Schroeder family, which includes their two sons.

The crew arrived in Hartington last March, Erin said. Besides spending long days shooting footage of the family, the seven television crew members have stayed at the Schroeders’ hotel and have eaten meals with the family.

"This needed to include the whole family. Otherwise, we would be spending a tremendous amount of time away from our boys," Erin said. "We had already spent a great deal of time and hard work on restoring the hotel. It was very time consuming and tedious. Now, we would spend time away from the boys with our veterinary practice and the television series."

Ben sees the boys’ involvement as important in two ways. They help with the work, and Ben sees a bit of himself as he helped his veterinary father, Dr. John Schroeder, while growing up in Coleridge, Nebraska.

The boys have shown their comfort around the film crew, challenging others to a chin-up contest on the stall holding the Sorensens’ horses. The family and film crew also bantered and tossed around jokes.

"With teenagers, you never know their response," Erin said. "But now, they’re used to it. They can say some funny things."

However, things get serious when the film crew starts rolling. The "set" becomes still with no room for outside noises, sights or distractions.

Carter noted the scenes aren’t staged and the shooting times aren’t arranged or scripted. The film crew remains prepared 24/7 for whatever calls are received at the veterinary clinics.

Those "patients" come in all shapes, sizes and species, Carter said.

"They (the Schroeders) have done leg surgery on a chick, removed the tumor from a dog and rescued the eye of a baby opossum," he said. "They had a touching story of a baby deer they encountered in a field who had lost the use of both legs."

In addition, the Schroeders helped with the delivery of a birth at an inconvenient time, Carter said.

"They had a corgi (dog) who needed a C-section at 7 a.m. on Easter morning," the film director said. "It didn’t matter; it was out the door."

The Sorensens became part of the series when they contacted Ben about checking their horses’ teeth.

"They have been our vets for our Belgians for several years. They asked if we were willing to have a call filmed and we thought that would be great," Loretta said. "We have two Belgian geldings, 15 and 16 years old, who needed dental work. The horses’ names are Pat and Mike. We bought them in 2006 at a Waverly, Iowa, fall draft horse sale. We believe they were probably raised by Amish but have no proof of that."

Alan holds a special connection with the two horses.

"The last horses my dad bought were named Pat and Mike, and I said that I would give those names to the first horses that I bought," he said. "I use the same harness that my dad used for his horses in 1955."

The Belgians weigh about one ton each, Ben said. Despite their huge size, they don’t receive the full dosage of anesthesia.

"Horses’ teeth keep growing. When you open up their mouth, you see very sharp teeth," Ben told the Sorensens. "Do you want to feel them? These teeth are just like razors."

A stall was set up to hold the horse in place during the procedure. Ben administered the injection to put the horse to sleep during the dental work. Soon, the horse dropped its head and started snoring.

Charlie Schroeder held back the horse’s tongue while his father performed the dental work. They could see an ulcer in Mike’s cheek, and the horse’s teeth weren’t working together to grind down the sharp edges

"This horse had wolf teeth, which needed to be planed, or ground down," Ben said.

Ben took off the rough spots with a special electronic drill. When the procedure was done, the boys drew water into a large syringe and rinsed out the horse’s mouth.

Meanwhile, the film crew was capturing every moment — sometimes very up close and personal. A camera or sound man often stood in the midst of the procedure or conversation to catch each candid moment.

"We do interviews along the side, rather than shoot first and then conduct interviews later," Carter said, noting the result comes across more natural and captures the spontaneity of the moment.

Carter watched two cameras to follow what Lawing and Dahlberg were filming and direct them on angles and either close-up or pulled-back shots. He could also hear the sound for any imperfections.

Carter wasn’t ready for Ben’s next comment. "We’ve got a penis bean," the veterinarian said, referring to a waxy build-up interfering with the horse’s urination.

It’s all part of expecting the unexpected, the director admitted.

The film crew arrived last March, just ahead of the bomb cyclone that inundated Nebraska with flooding and created massive devastation which remains months later.

The series will incorporate the flooding’s impact but also the resiliency of those affected by it, Carter said.

"The flooding is depressing. But on a bright spot, these people have really bounced back and come together," he said. "That’s a message that will be received all over the country. The impact of the flooding is ongoing, but these people (living amidst it) aren’t going away."

The film crew has completed four of the six episodes, but the Schroeders still feel at times as if it’s all a dream.

"It’s like a long haul and a slow-moving train," Erin admitted. "But they are representing us in a positive way, how we work and play. We put them up at the hotel. There are seven of them and four of us. It’s like having a family of 11."

Erin believes the series goes far beyond their family, teaching much of the nation about rural life and agriculture. In the process, it will hopefully erase many stereotypes, she said.

"This shows what life is like in the middle of the country," she said. "People on the coasts and in the cities have a very preconceived notion about what we do and how we treat animals."

Carter agreed, showing the strong feelings that livestock owners hold toward their animals.

"We show the length they will go to provide their animals an exceptional high quality of life," he said. "This is their livelihood. They give them an exceptional amount of care."

Rural areas play an important role in the nation and hold dear many traditional values such as neighborliness, Erin said. "People are yearning for that connection, and they also have to know about the history of the heartland," she said.

Ben agreed. "Many people on the coastal areas have no clue what it’s like in the Midwest. This series can help educate them in the way we live," he said.

Carter noted his crew has been adopted not only by the Schroeders but also by the larger community. When the crew first arrived, Ben introduced them at a cattleman’s banquet and announced that people could expect seeing the film crew around the area.

"These are incredible people, and there has been a tremendous bonding," Carter said. "There is trust among us and confidence in what we all do. In this series, we want to show the role that veterinarians play in their community. On a daily basis, they’re making a large difference in the lives of their patients, and we want to communicate the relationship they hold with their clientele."

The Schroeders have turned out to be every bit — and much more — of what the film crew hoped when the series was sold and the work started, Carter said.

"They offer a broad reach. They are young, very accessible, very articulate, very good looking and they live in the middle of the country," he said. "This tells the story of their lives, what they do and why they do it. They are very relatable."

Ben said he has learned about the hard work that goes into making a television series. He’s less certain what the future holds when the series airs next year.

"It’s all been so surreal," he said. "We’re not sure what a hit show would mean for our family. We hope it’s a hit show."

Carter feels confident about the series and can make one prediction.

"This will change their lives, and I believe it will definitely change it for the better," he said.