This photo, taken Thursday by the Tripp Police Department, shows the wall of dirt approach the Hutchinson County community. The dust storm, known as a haboob, was followed by a derecho wind storm with gusts of 107 miles per hour. Thursday’s storms brought devastation to South Dakota and Nebraska, including the Yankton region. 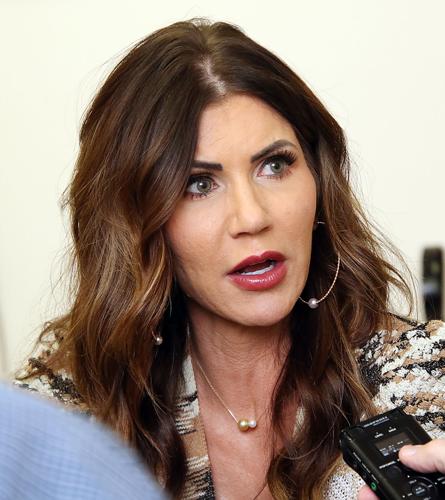 South Dakota Gov. Kristi Noem discussed storm relief efforts with local media when she was in town Monday to speak at the Friends of the NRA banquet at the NFAA Easton Yankton Archery Center.

This photo, taken Thursday by the Tripp Police Department, shows the wall of dirt approach the Hutchinson County community. The dust storm, known as a haboob, was followed by a derecho wind storm with gusts of 107 miles per hour. Thursday’s storms brought devastation to South Dakota and Nebraska, including the Yankton region.

South Dakota Gov. Kristi Noem discussed storm relief efforts with local media when she was in town Monday to speak at the Friends of the NRA banquet at the NFAA Easton Yankton Archery Center.

Gov. Kristi Noem said the recovery effort is moving along after last week’s devastating storms across eastern South Dakota, but there are also limits on state and federal assistance.

Noem spoke with media prior to her appearance Monday at the “Friends of the NRA” banquet in the NFAA Easton Yankton Archery Center (NEYAC).

South Dakotans have pulled together after last Thursday’s storm that swept across multiple counties, Noem said.

“People are doing well, considering this was an unprecedented weather event,” she said.

The region, including the Yankton area, was hit by a one-two punch, according to Meteorologist Alex Trellinger.

“First came the haboob, a wall of dirt normally found in desert areas such as Arizona and New Mexico, or in desert countries,” he told the Press & Dakotan. “We don’t normally have them in this area because we’re too green.”

The haboob was followed by a derecho, specific kind of wind damage that cuts a swath of more than 240 miles with wind gusts of 58 miles per hour or greater. During Thursday’s storm, winds of 70-90 miles per hour (mph) covered a wide area and reached 107 mph at Tripp in Hutchinson County.

The storm swept through multiple states, including Nebraska and the Dakotas. As of Monday, damage assessment was still under way. Many parts of the Yankton region sustained damage to highway traffic signs, homes, businesses, and farm bins, silo and equipment.

Churches also sustained damage, with St. Wenceslaus Catholic Church in Tabor losing the cross at the top of its structure. The church forms a large part of the skyline for the Bon Homme County community of 400 residents known for its Czech heritage.

Two people died in eastern South Dakota, including a Yankton native, as a result of the storm, Noem referenced during Monday’s interview. In addition, the size and scope of the storm has left widespread damage.

“Typically, we have a tornado or a bad storm hit a small area, but this hit 28 different counties that sustained significant damage. And it wasn’t just the towns that were devastated -- it was the farms located between them,” Noem said.

“People’s lives will never be the same. Obviously, we had two tragedies (with the lost lives), which is horrific for those family members and for others. But you have farmers and others who have their entire businesses gone.”

Noem has ordered the South Dakota National Guard and the Department of Public Safety’s (DPS) Wildland Fire Division and Highway Patrol to assist impacted communities. In addition, the DPS’s Office of Emergency Management has opened an Emergency Operations Center to coordinate the state’s response with local government authorities.

However, there are limits to state assistance, Noem said.

The state maintains a disaster fund for public infrastructure, such as power lines, the governor said. However, the state doesn’t have the resources necessary to handle the storm losses for private citizens and property.

“The National Guard’s help during this is not supposed to be used on private property,” she said. “It can be used on roadways and streets, but it can’t help clear yards and homes.”

The Federal Emergency Management Agency (FEMA) can provide dollars if a damage threshold is met, but those funds are usually available for public assistance such as infrastructure and not for private property.

“A lot of this is not something FEMA would cover. You have personal property that, because of inflation, is now underinsured,” she said. “Buildings that cost $100,000 to put up now cost $160,000 to $200,000 to rebuild, and they’re not going to get it replaced. The reality of this (storm) is the financial loss it’s going to take, and it will take a toll on their future.”

The South Dakota Department of Social Services (DSS) has worked to place residents in touch with resources for dealing with storm-related mental health issues, Noem said.

The assistance included students whose schools were destroyed or closed because of storm damage and are feeling a loss with the school year ending sooner than scheduled, the governor said.

Students experiencing problems at home may feel a particular sense of loss because school gave them a safe place and sense of stability, the governor added.

“They watched all of this destroyed, and they were left pretty empty,” she said, adding the counseling services are open to all ages.

Two more rounds of storms may hit the region this week, Trellinger said.

“It’s entirely possible that we’ll have another run of thunderstorms, most likely the first chance is Tuesday during late afternoon and into the evening,” he said.

“Yankton has a marginal 1 out of 5 risk for a severe storm. The big threat would be large hail and strong winds, nothing like we saw Thursday. A tornado isn’t very likely, but there is always the possibility.”

“After those two events, we don’t have any signs of chances of severe weather for the rest of the week,” Trellinger said.

Temperatures look to soar the remainder of the week, approaching 90 degrees, he said. “When you have more heat, it generally gives us more instability for thunderstorms and severe weather,” he said.

Trellinger stresses the need for remaining prepared for storms and alert for warnings from the news media and several social media platforms.

“If you have plans for outdoors, remain aware of any severe weather, especially if you’re going out on the water and need time to get back to shore,” he said. “Remember, the outdoor sirens are only intended to alert those who are outside to get indoors. The sirens usually can’t be heard indoors.”

During Monday’s interview, Noem said she saw countless examples of people helping each other following last week’s storms. One of those stops carried special significance to the governor, as her hometown of Castlewood, south of Watertown, was devastated and one of the hardest-hit communities.

“One family moved from California to Castlewood and had just closed last week on their house located next to the school,” she said. “Their home was wiped out by the storm, but they were most amazed by the community members who turned out to see how they could help.”

The spirit of helping each other following a disaster can be found across South Dakota, Noem said.

“People from other states who moved here said, ‘Yes, this storm was horrific and what happened to us was devastating, but what I can’t believe is the community members who showed up to help us,’” the governor said.

“It seems normal to those of us in South Dakota, but it’s not normal across the country. Here, you wrap your arms around each other and say, ‘We’ll take care of you.’”