The Tabor-to-Platte rail-to-trail project may be at a crossroads.

Amid a great deal input from the public, the South Dakota State Railroad Board opted Wednesday to postpone a vote on a proposed project from the Friends of the Tabor-to-Platte Rail to Trail.

The proposal called for converting approximately 30 miles of unused rail beds between Tabor and Platte to a bike trail.

During public comment time, commissioners heard arguments both for and against the project.

Arguments against included the effect on adjacent landowners, as well as liability issues.

Mike VandenBos said that the trail, which proposes to not allow guns, affects hunting rights in the areas around it.

“We won’t be able to hunt within 500 feet of the trail, which is 1,000 feet because of both sides,” he said. “We would actually lose 187 acres of ‘huntability’ along the trail, not to mention the effect on wildlife in the area. It would cut into that.”

Amy Allhiser shared her concerns about how any injury to people on the trail could create liability issues.

“I will no longer be able to hand my 17-year-old son a gun and say, ‘Go down to grandpa’s pond and shoot some ducks,’ because that pond is — on our land — within 150 feet of that trail,” Allhiser told the board.

However, Marcus King told the board he was in favor of the trail because it would help the small towns along it survive into the future.

Tom Travis, who spoke in favor of the proposal, said he has been a resident of the Platte area for all of his 70 years. He currently still farms, but has also worked as an auctioneer, a real estate agent and a letter carrier, he said.

“I’ve watched the population decline in our area. I also see what has happened to our town, our schools, what could come about with the potential loss of our hospitals or medical (access),” he said. “If it hadn’t been for the fact that I’m 15 miles from a hospital — versus 60 miles to Mitchell or anyplace else — I wouldn’t be here talking to you today.”

The trail, he said, could provide needed economic stimulus for the area.

On addressing the board for the Friends group Wednesday, Bob Foley said the group had modified its initial proposal to include an endorsement from the board to obtain funds for a feasibility study, develop a master plan for the project and convert a five-mile display section that is all on rail property.

“We have a vigorous debate on either side, a lot of strong opinion,” he said. “We want to obtain funds for a study by a dispassionate professional group of the rail-to-trail proposal that will address these issues.”

Foley said that the group plans to apply for American Recovery Act funds through the Economic Development Administration of the U.S. Commerce Department.

“South Dakota is in the Denver region, along with seven other states,” Foley said. “There’s a pool of about $19 million for all of these states, on a competitive grant basis, for transformational recreational projects.”

The group would seek about $775,000 in grant money for the first phase of the project, leaving about $2.5 million for the remaining portion of the trail, he said.

“Should the study and the discussion that it engendered produce some consensus, we would go forward, though, committing to the study is not committing to the project,” Foley said. “We ask for your support because we have to have that for the grant. If you say there can be no trail from the rail, the grant can’t work.”

Board members said they needed more information to make a decision. They also encouraged Foley to seek input from the state Department of Transportation for the portions of the project that would connect using existing roads.

The board said it would reconsider the request from the friends group at its December meeting. 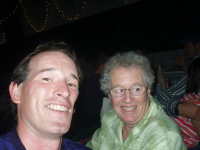 Good ideas. I have rode my bike on the cowboy trail between Norfolk and Valentine. I wonder how these concerns were dealt with on that trail? I would say the maintenance such as weed control and keeping the surface free of vegetation on something like this will be a big factor.