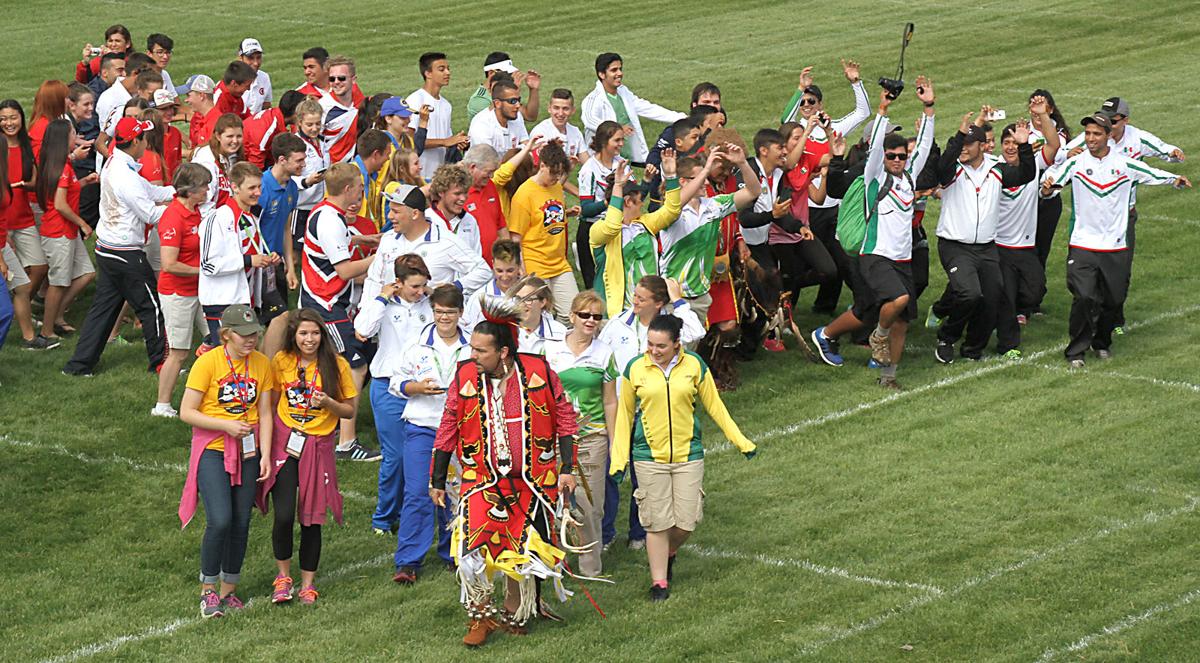 A member of the Osni Ponca Heduska Society leads archers, coaches and others in a dance around the field during the opening ceremony at the World Archery Youth Championships (WAYC) in Yankton Sunday afternoon. More than 50 nations are represented in the weeklong tournament, To see more photos, visit www.yankton.net/. 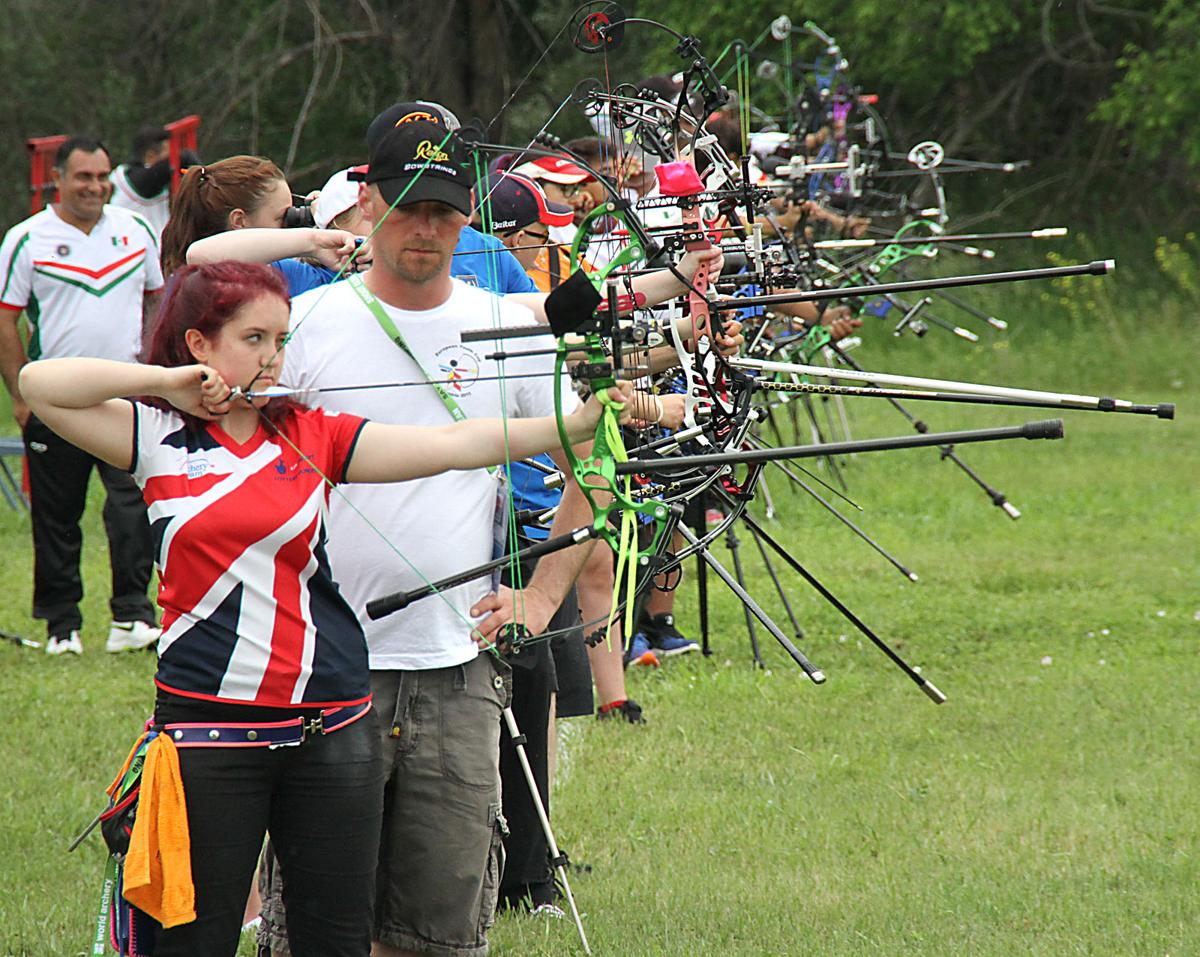 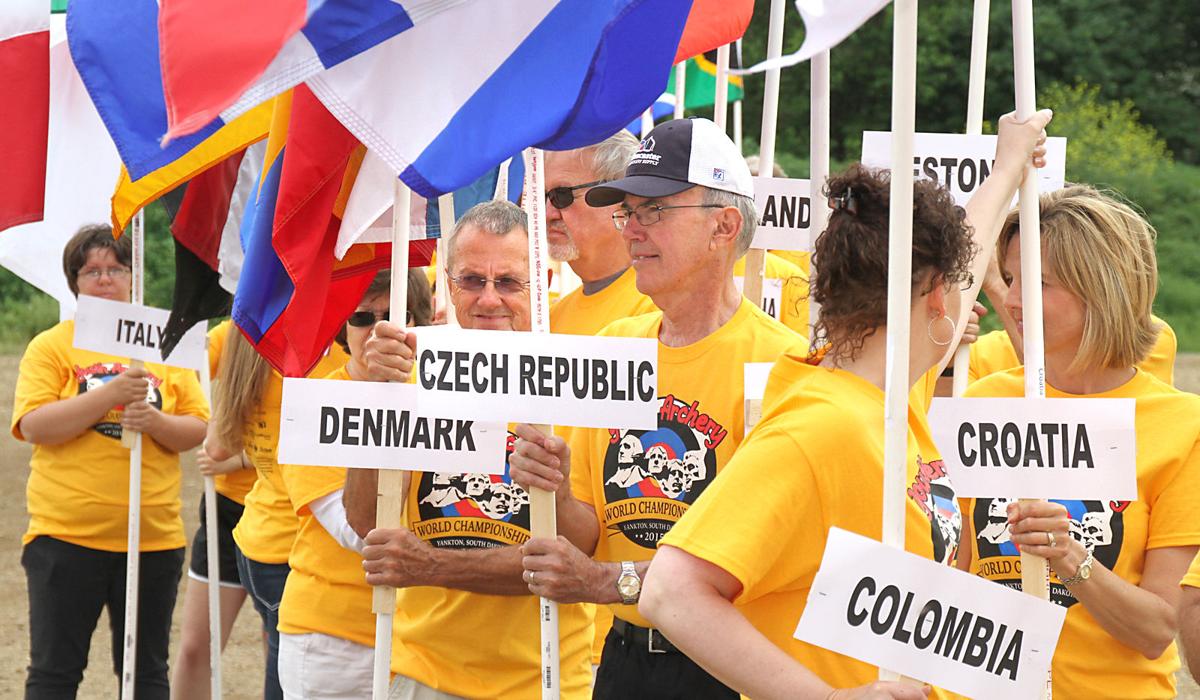 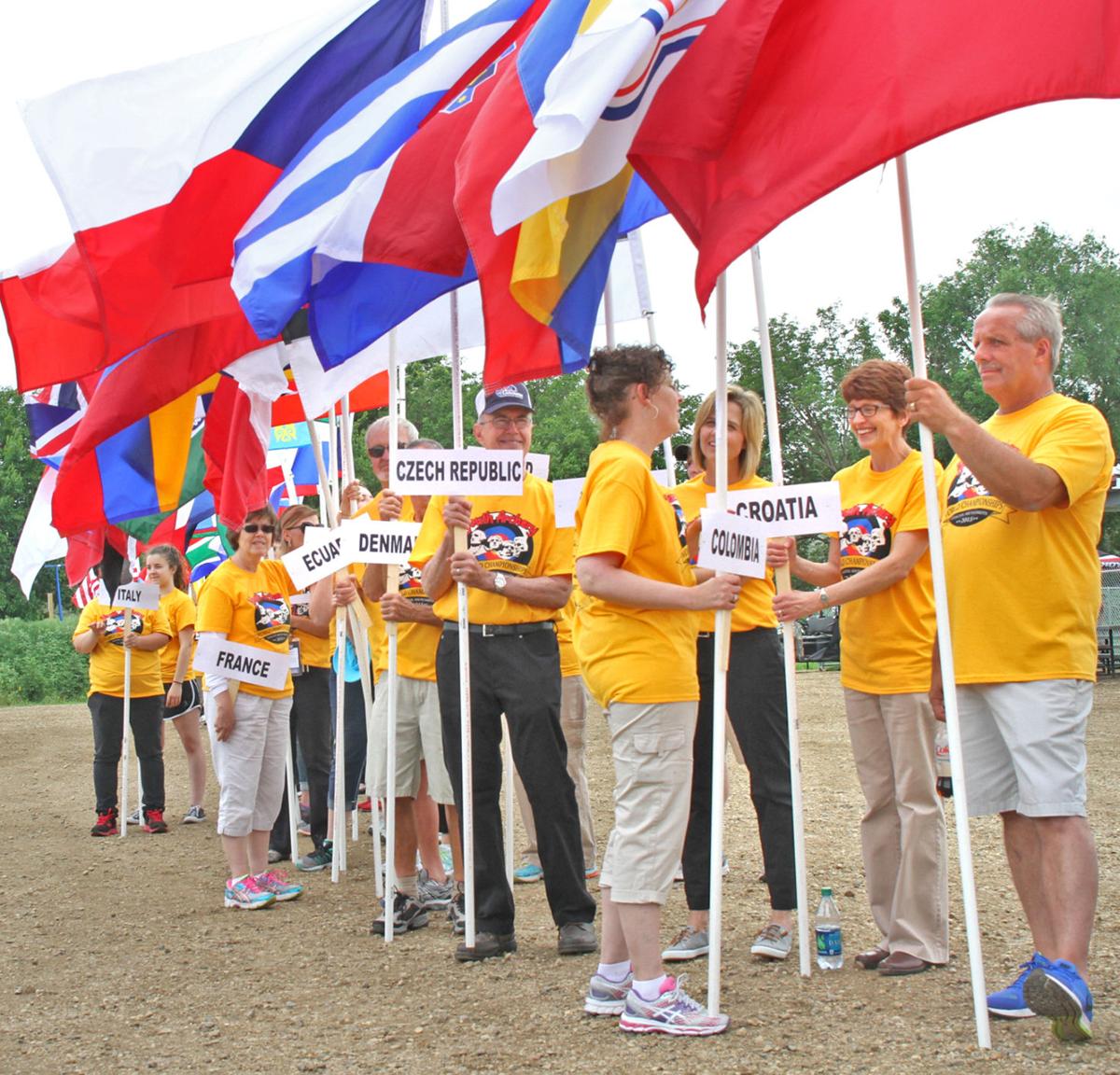 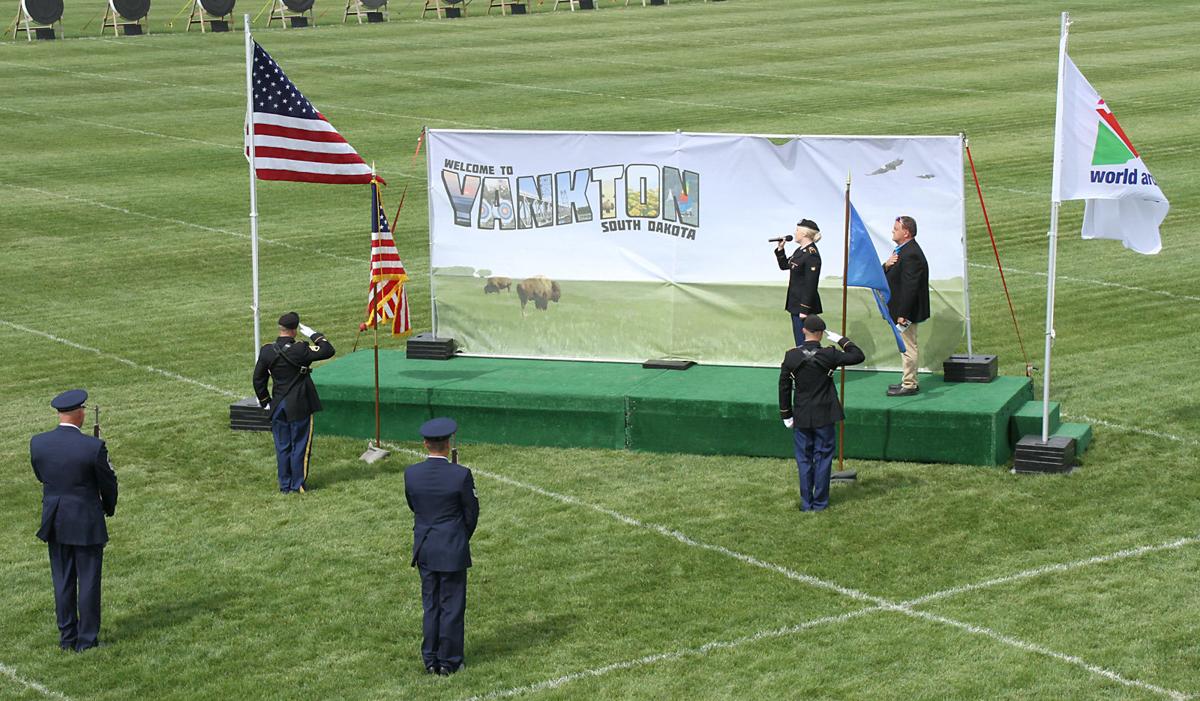 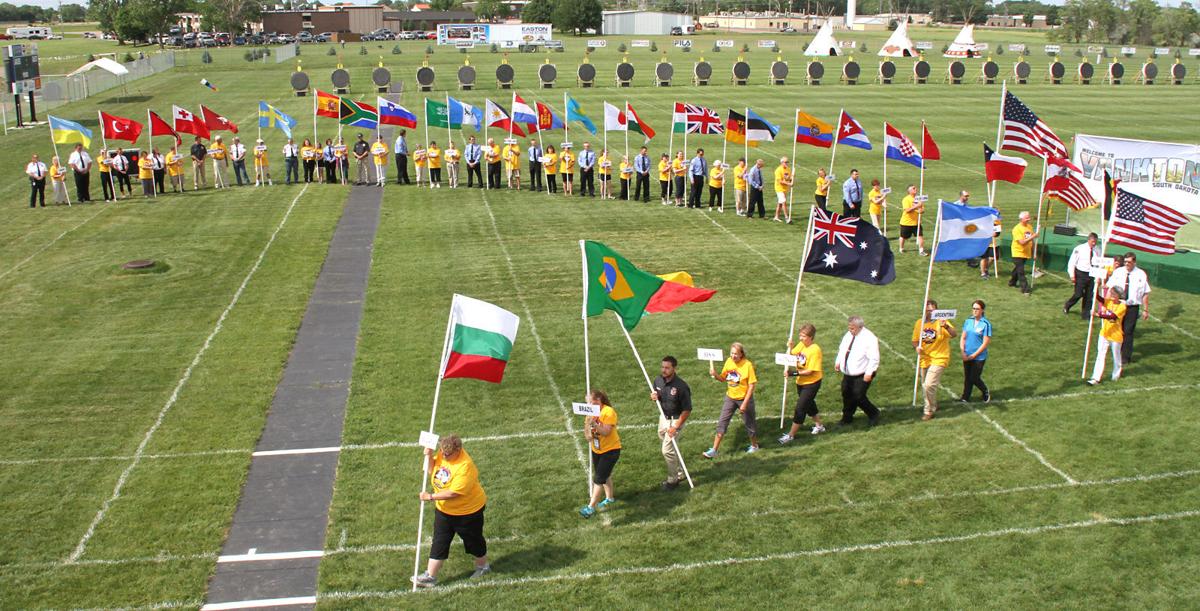 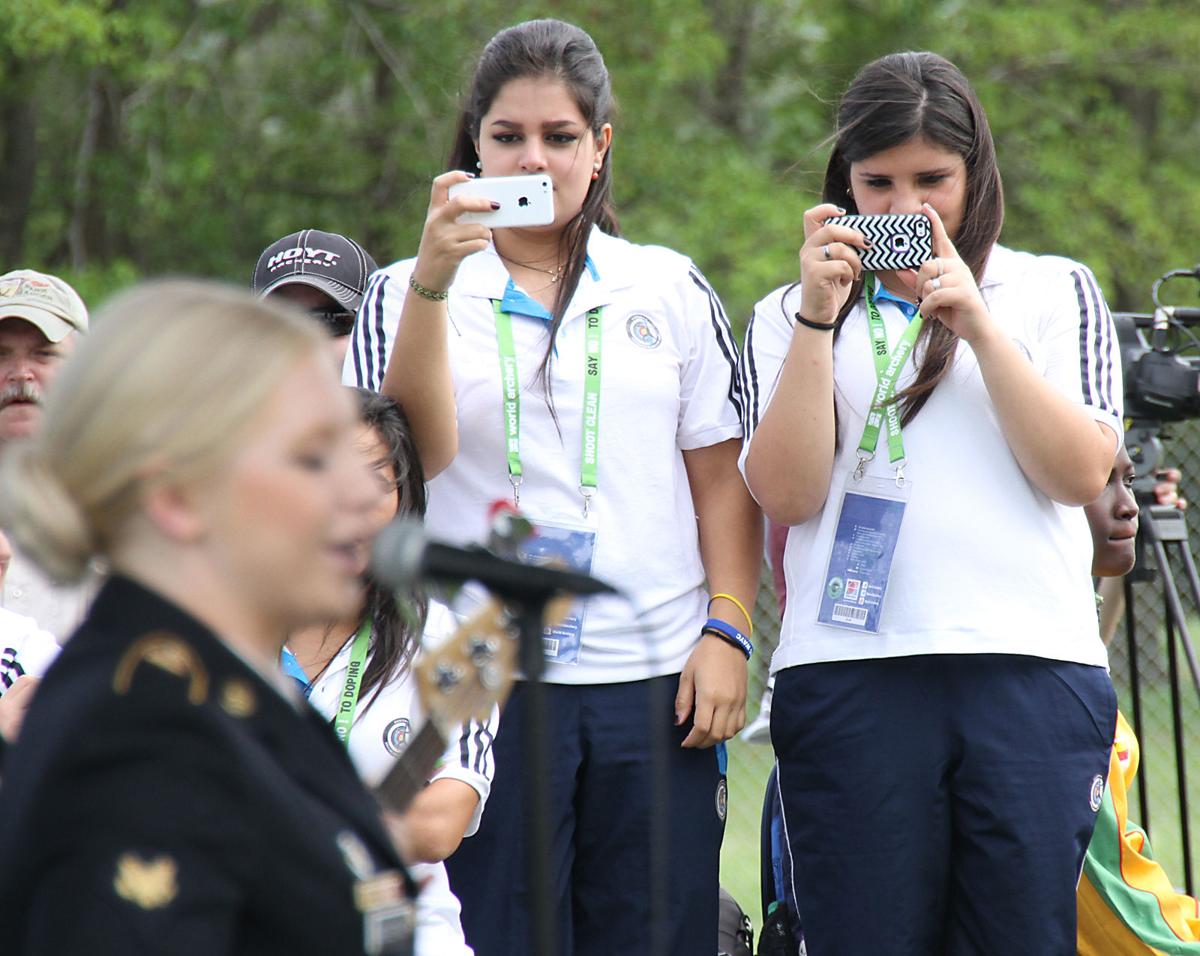 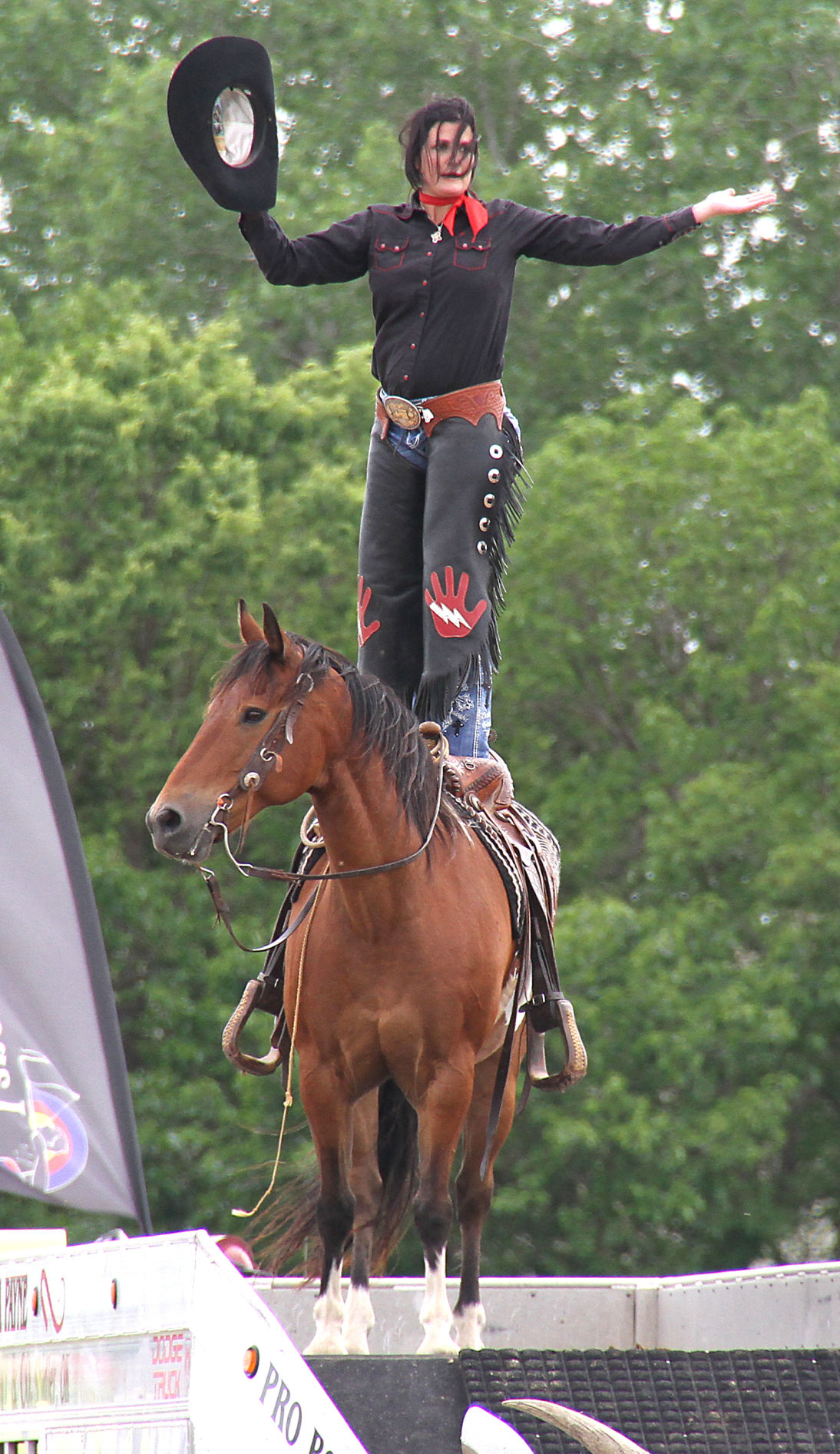 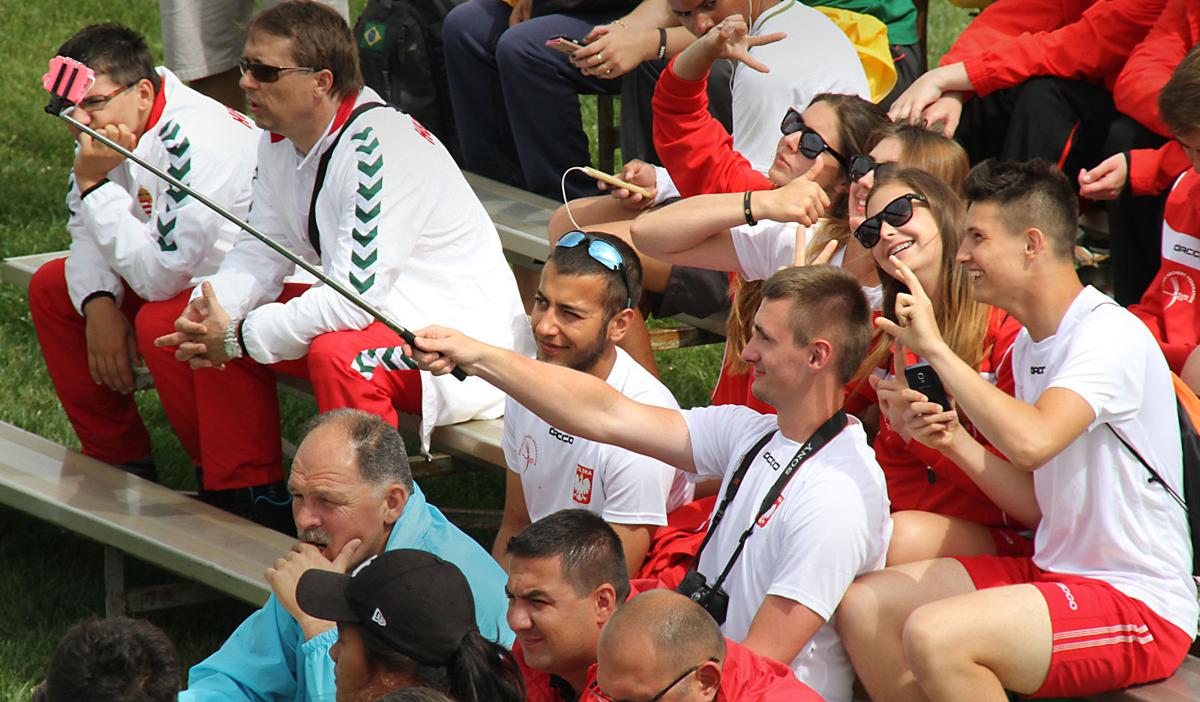 A member of the Osni Ponca Heduska Society leads archers, coaches and others in a dance around the field during the opening ceremony at the World Archery Youth Championships (WAYC) in Yankton Sunday afternoon. More than 50 nations are represented in the weeklong tournament, To see more photos, visit www.yankton.net/.

A rainy Sunday morning gave way to sunny afternoon skies to help welcome some of the world’s best young archers to Yankton.

World Archery Secretary General Tom Dielen told the crowd of archers and spectators that he’s hoping for a spectacular tournament.

“We hope that it will be a fantastic week for all of the athletes,” Dielen said.

More than 500 archers representing 51 countries are in attendance this week.

Dielen made special note of one country that was supposed to be in attendance for the tournament, but dropped out at the last minute due to issues with obtaining travel visas.

“I would like to give a small, special word to our athletes from India who unfortunately could not make it due to some administrative problems,” he said. “Please send a warm message to your colleagues (in) India and I hope we’ll see them next time.”

In a further show of support for team India, the flag of India was still included in the parade of nations.

In addition to a performance by the South Dakota National Guard band, archers also got a taste of the wildlife present in the old west as Amanda Payne of The One Arm Bandit & Company put on a show featuring two trained bison. The ceremony also featured a performance of three songs by the Osni Ponca Heduska Society Native American group. During one of the songs, archers were encouraged to get up and dance around with the Native performers.

Archer Obai Arafat of Riyadh, Saudi Arabia, told the Press & Dakotan this was one of his favorite parts of the ceremony.

“I think this (opening ceremony) is different because the archers dance here and get involved,” Arafat said.

NFAA president Bruce Cull called the dance one of his highlights from the opening ceremonies.

“I think when you literally see people on their own accord jump up and get into a dance, that takes a lot,” Cull said. “It’s not like you’re jumping up on stage at a concert or something — these people had to come out in front of all their competition and show their excitement and their involvement. I think that’s really cool.”

Arafat added he likes the city.

“It’s really nice because of the trees and greenery,” he said. “We have deserts.”

Cull said overall, the opening ceremonies were a great kickoff to the tournament.

“Absolutely, without a doubt, a success,” he said. “Seeing the turnout we had from the community, I think that pretty much says what we’re working for. Watching the athletes interact with the community and all the people that were here, I just think that’s exactly why we got the bid and I think it’s just proof that this is a great community and this is a great place to have it.”

Dielen said he’s already noticed how much the city and its many volunteers have embraced the week-long tournament and its participants.

“I’ve only been here since (Saturday), but I already see that the city of Yankton is living this world championship,” he said. “I’ve seen many, many yellow shirts in the streets yesterday (evening) and this morning. Thank you very much to all the inhabitants of Yankton to make everyone feel at home here in your beautiful city. (Yankton) might not be the biggest city in the U.S., but this year and this week, it will be the heart of world archery.”