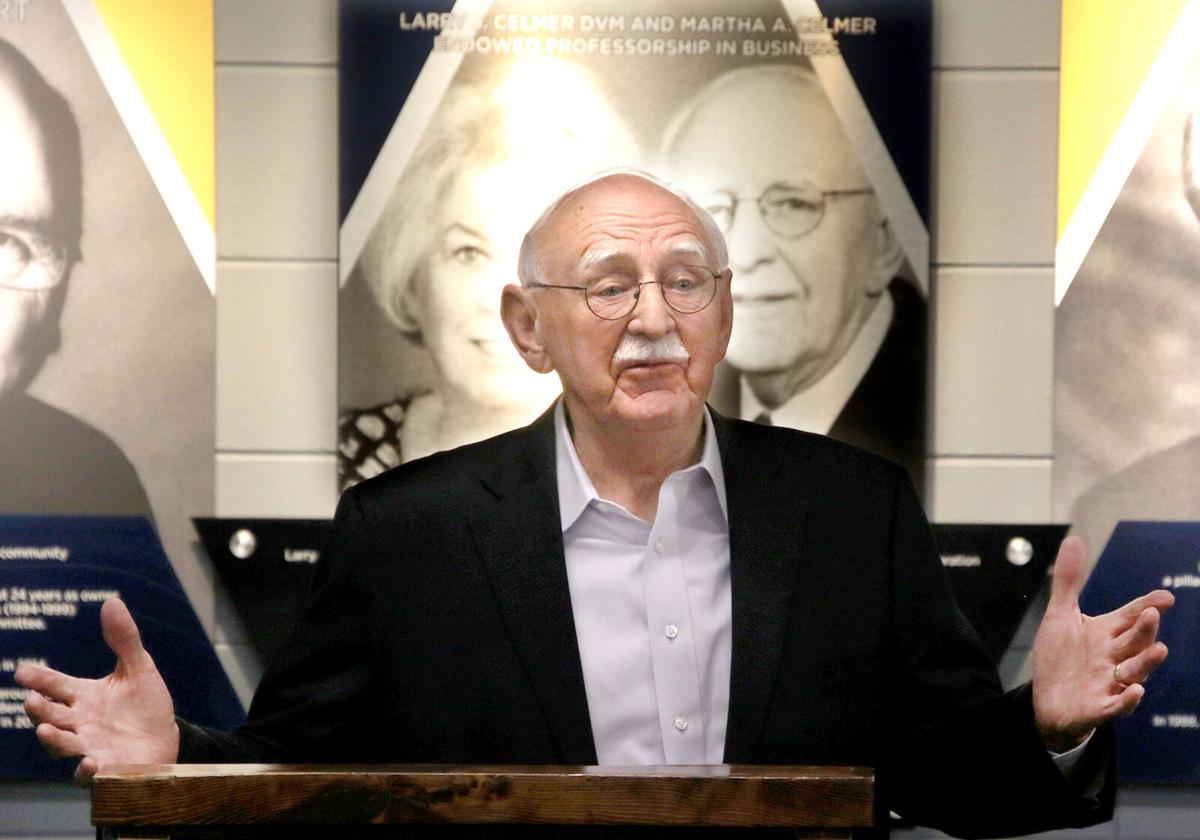 Standing in front of a poster featuring he and his wife, Martha, Larry Celmer speaks during a press conference Wednesday night announcing a gift establishing an endowed professorship in Business at Mount Marty University. 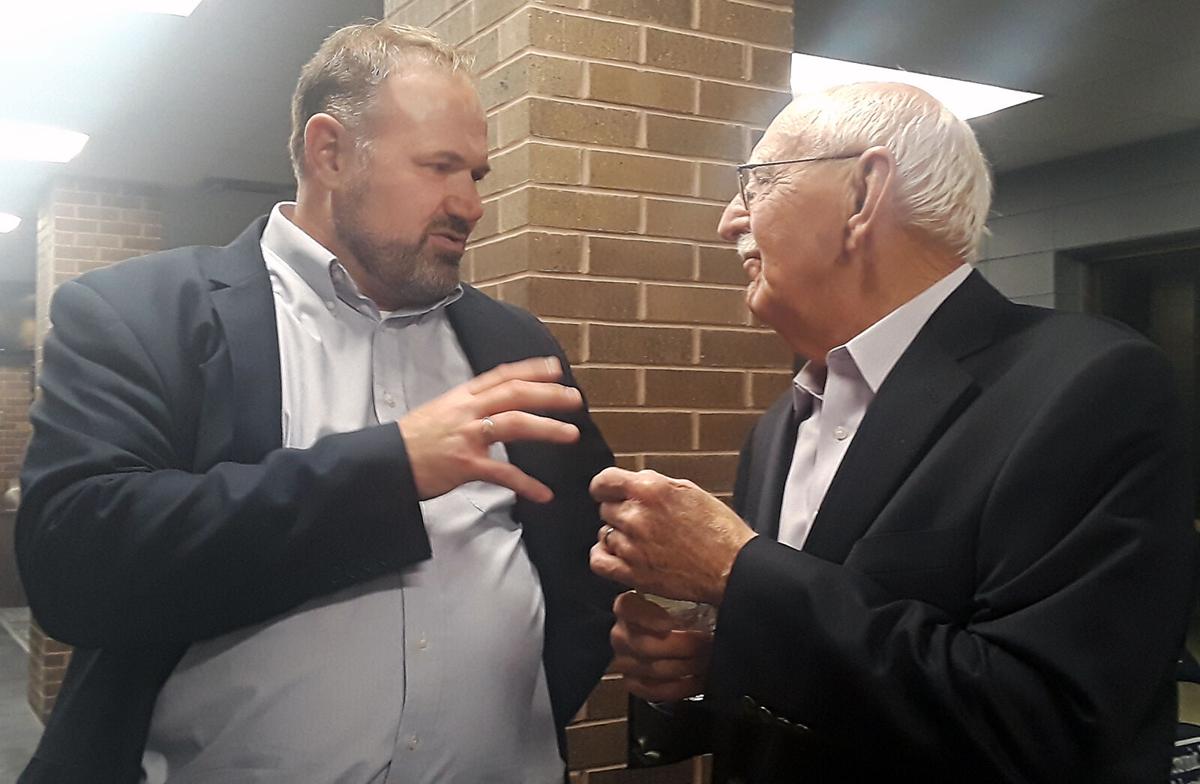 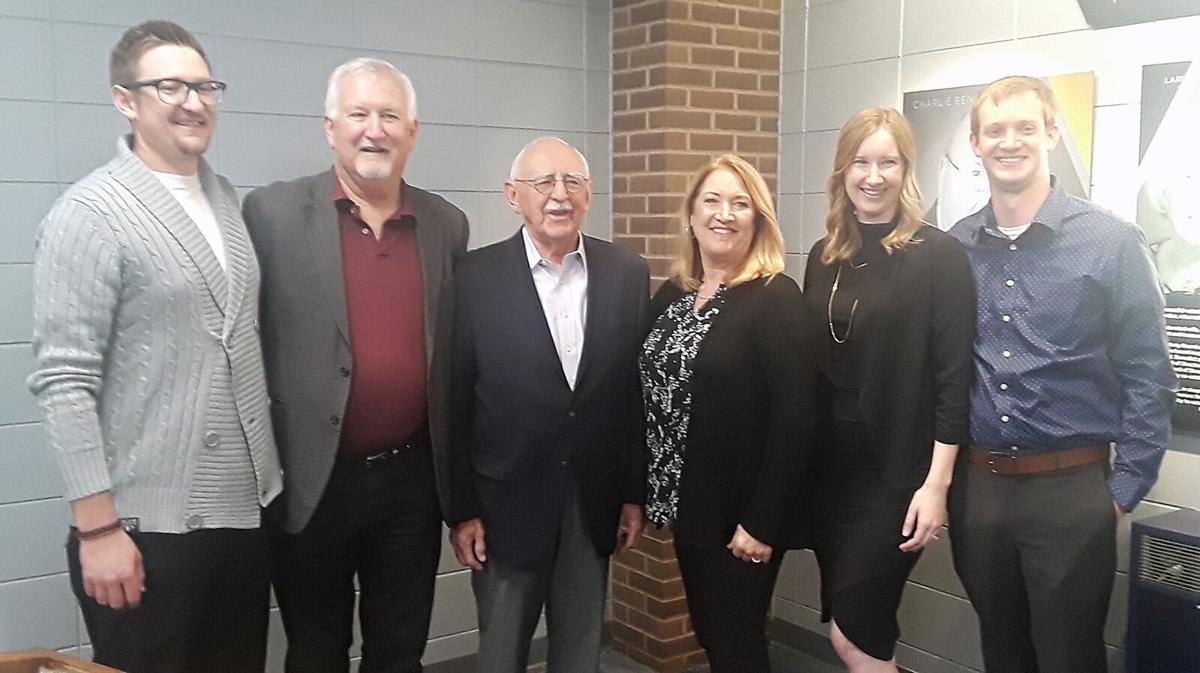 Standing in front of a poster featuring he and his wife, Martha, Larry Celmer speaks during a press conference Wednesday night announcing a gift establishing an endowed professorship in Business at Mount Marty University.

As a veterinarian, Dr. Larry Celmer felt confident about working with animals but felt unprepared in running a clinic or other practice.

The Yankton native took his skills to California in 1961, where he ran into the cold realities of tackling tough business decisions.

“I spent seven years at Iowa State University. I left with a veterinary degree but felt something was missing,” he said. “I went out into the big world without a business course. The school of hard knocks took its toll.”

Celmer and his wife, Martha, returned to Yankton in 1990. Larry rekindled his lifelong connection, dating back to his childhood, with Sacred Heart Monastery and the Benedictine Sisters. He served on the then-Mount Marty College board of trustees from 1995-98 and again from 1999-2002.

Now, he has combined his love for Mount Marty University and the Sisters with helping today’s students avoid the challenges he faced with his lack of a business background.

On Wednesday, MMU officials announced the Celmers’ major gift establishing an endowed professorship in business. The event was held in the front lobby of Cimpl Arena.

The Celmers’ gift will help meet several goals, according to MMU officials. Those objectives include attracting and retaining business faculty, strengthening ties with the business community and building the school’s business program and enrollment.

The Celmers have requested the amount of their gift not be disclosed. However, the interest from the endowment will fund the professorship, which is a two-year term at a time.

President Marc Long described the donation as an estate gift, and the amount can change over time. The university will receive the funds upon the Celmers’ deaths, but planning can begin now for the professorship.

“Currently, we only have two endowed professors — in nursing and theology — and business will be the third one,” Long said. “We hope to add more in the future.”

Barb Rezac, MMU vice president for mission and advancement, told the Press & Dakotan that the Celmers’ gift is one of the largest received by the school. She described it as “substantial” and “transformative.”

The Yankton region holds a major stake in the Mount Marty business program for its labor force and economic development, Rezac said.

“We want young people here. They’re our greatest asset. How do you get and keep young people in Yankton and South Dakota?” she asked. “The tools for a great program include an internship program with local businesses, who might hire those young persons and keep them in Yankton.”

Mount Marty has received another boost with Yankton Thrive’s assistance with organizing the Business Club on campus, Long said. The MMU business program has seen strong growth, nearly doubling its enrollment in recent years, he added.

“This fall, we have 102 business students compared to just 55 five years ago,” he said. “In the coming years, we anticipate continued growth as we build on the Benedictine Leadership Institute with a curriculum focused on faith-based and ethically-driven decisions.”

The Celmers’ gift will allow Mount Marty to grow its business program and expand its work with area businesses, Long said.

“Any university is only as good as the quality of its faculty, and that’s the thing Dr. Larry Celmer brought to me shortly after I arrived in Yankton (in 2015),” Long said. “From his time on the board of trustees, including his time as chair, he knew the importance of having a top-notch faculty at a university.”

During Wednesday’s announcement, Larry Celmer referred to the college students attending the event.

“I hope every one of you has the opportunity to leave Mount Marty with some kind of business behind you so at least you can manage your personal affairs,” he said.

A strong business foundation has become necessary, regardless of a student’s major, Celmer told the Press & Dakotan.

“I really feel strongly, for us to survive today with the complications of life, it’s a necessity that we need all the tools we can get to be prepared (with our finances),” he said.

Martha Celmer was unable to attend Wednesday’s program. However, other family members were present, along with MMU faculty and members of the Yankton business community.

Wednesday’s presentation featured portraits of the Celmers along with major donors Charlie Bender and Laddie Cimpl. The activities center, opened in 1988, was renamed following a gift from Cimpl, a local businessman. In the summer of 2018, Cimpl Arena underwent a $1 million renovation courtesy of Bender’s family.

“This is our own Mount Rushmore,” Rezac said, pointing to the three portraits. “(The three men) all served on the board at the same time, through difficult and dark times. Over the years, they have expressed the importance of the Sisters in their lives.”

Wednesday’s announcement came at a very emotional time for Mount Marty and Sacred Heart Monastery, as the funeral was held that morning for Sister Jacquelyn Ernster. She formerly served as monastery prioress and as the last monastic president for Mount Marty.

Celmer, Cimpl and Bender, along with major benefactor Jim Donohoe, all held a deep respect and friendship with Sister Jacquelyn, Rezac said.

Looking ahead, the Celmers’ gift for an endowed professorship will provide additional momentum for the program, said Jamie Rounds, chairman of the MMU business department.

“This type of donation is always wonderful. It shows the support of the community and the loyalty toward Mount Marty,” he said. “This (gift) helps us be more steady and stable in our offerings and to meet the needs of a growing business department.”

Business has become the second most popular major on campus behind nursing, Rounds said.

“We eventually want to have a magnet program,” he said. “We’re in the process of reviewing our curriculum and hoping to create changes that set our university apart from other schools.”

The Business Club reflects the growing campus diversity and number of international students, Rounds said. The president comes from Germany, the vice president from Argentina, the treasurer from Italy and the secretary from the United States.

“We’re seeing more things like that happening, and we want it to continue,” Rounds said.

Celmer saluted MMU’s current leadership and vision, starting with Long and continuing through the entire faculty and staff.

“And I can’t say enough about your students that represent your school so well,” he said. “Your students have got the spirit that I haven’t seen here in years. It’s very motivating and very stimulating. I’m glad they’re here tonight.”

Wednesday’s program was followed by a Thanksgiving meal served by MMU baseball coach Andy Bernatow, staff and volunteers. Bernatow, who also serves as interim athletic director, has organized the meals for students who can’t go home for holidays.

Those attending the program were invited to stay and join the MMU community.

That sense of hospitality and community is what makes Mount Marty special, Long said. Those values are taught in the business courses and other aspects of campus life, he added.

“It’s how you live your life, following values based on the 1,500-year-old Benedictine rules. It’s directly applicable to the society we live in now. It’s an appreciation for belonging to a community,” Long said.

Celmer said he considers his family’s donation as more than just a gift. He also sees it as a legacy and an investment in the future.

“I’m really impressed to have been able to talk to a portion of the student body. They represent themselves so well, and they’re such a spirited group of young people,” he said. “I’m glad they are associated with Mount Marty and were interested enough to be here. I’m very impressed with the student body. The university has come a long way.”