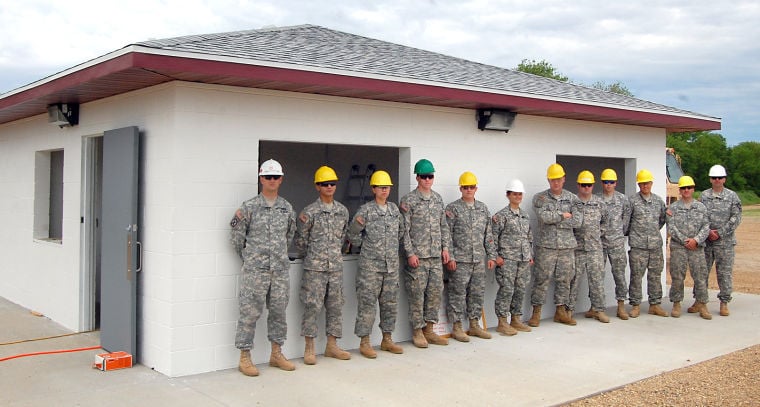 These are 12 of the approximately 50 155th Engineering Company members who worked on the comfort station at the National Field Archery Association grounds earlier this summer. The project was completed in mid-June for the NFAA as part of a South Dakota National Guard summer training camp. 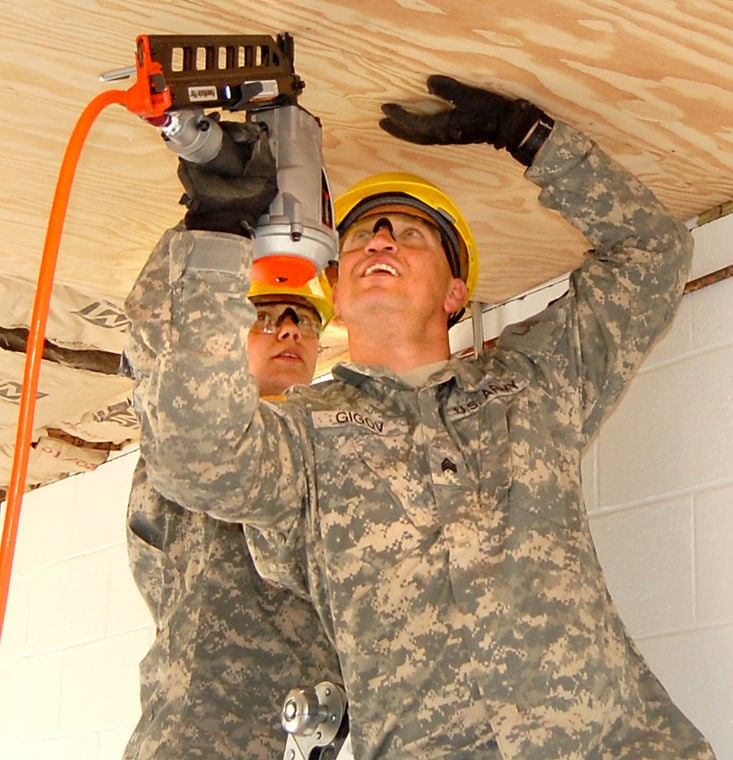 Sgt. Alex Gigov and Spc. Ariel Delgado put the ceiling of the comfort station in place.

These are 12 of the approximately 50 155th Engineering Company members who worked on the comfort station at the National Field Archery Association grounds earlier this summer. The project was completed in mid-June for the NFAA as part of a South Dakota National Guard summer training camp.

Sgt. Alex Gigov and Spc. Ariel Delgado put the ceiling of the comfort station in place.

As part of a summer training camp, the South Dakota National Guard recently completed a project on the National Field Archery Association (NFAA) grounds in Yankton that will benefit the general public.

A comfort station that includes a bathroom, concession stand and registration area was started by the 155th Engineering Company of Wagner May 4 and finished in mid-June.

“We built it from the ground up. We put in the footings, poured the floor, plumbed it, ran the water and sewer lines and we are wiring it,” said Chief Warrant Officer Tyler Vogt. “It gives our members the experience and confidence to do construction if we were to be deployed and have to do this in the theater. Some of the guys have construction experience from their civilian jobs, but a lot of them are college students or office workers who don’t get to do this every day.”

The National Guard regularly does work for non-profits, according to Vogt. The 155th Engineering Company specializes in vertical construction.

“Last year, we worked for the U.S. Forestry Service in the Black Hills during our summer camp,” he said.

“It’s going to be really cool to have people here from 60 countries a year from now (for the 2015 World Youth Championships) using something that our military built,” he stated.

The NFAA and the City of Yankton combined their resources to build the comfort station.

In 2013, the Yankton City Commission agreed to give the NFAA up to $38,000 to reimburse it for the purchase of materials used to construct the facility. A perpetual easement will be in place so the general public has access to it. The NFAA agreed to pay for any future maintenance to the comfort station.

Eventually, city and NFAA officials anticipate the Auld-Brokaw Trail will extend from Paddle Wheel Point east through the NFAA grounds and run past the comfort station.

“It was a big community effort that has required a lot of entities to come together,” he said.

A total of approximately 50 soldiers ranging in age from 19 to 46 worked on the project during different rotations.

“It is nice to give back to South Dakota as a guardsman,” said Sgt. Alex Gigov. “It gives me pride in what I am doing.”

Added Lt. Jason Sussner, “Fifty years from now, soldiers can show their grandchildren something they built that is still standing in the community.”

Cull said the comfort station will get its first use later this month when the NFAA National Field Championships get under way.

Does anyone know where I might be able to contact Alex? We had met back in Northern State University in Aberdeen, SD. I tried to keep in contact over the years but I couldn't. Now that I am doing a lot better, I wish to contact him again. If anyone knows, please let him know that I am looking for him again and wish to catch up.