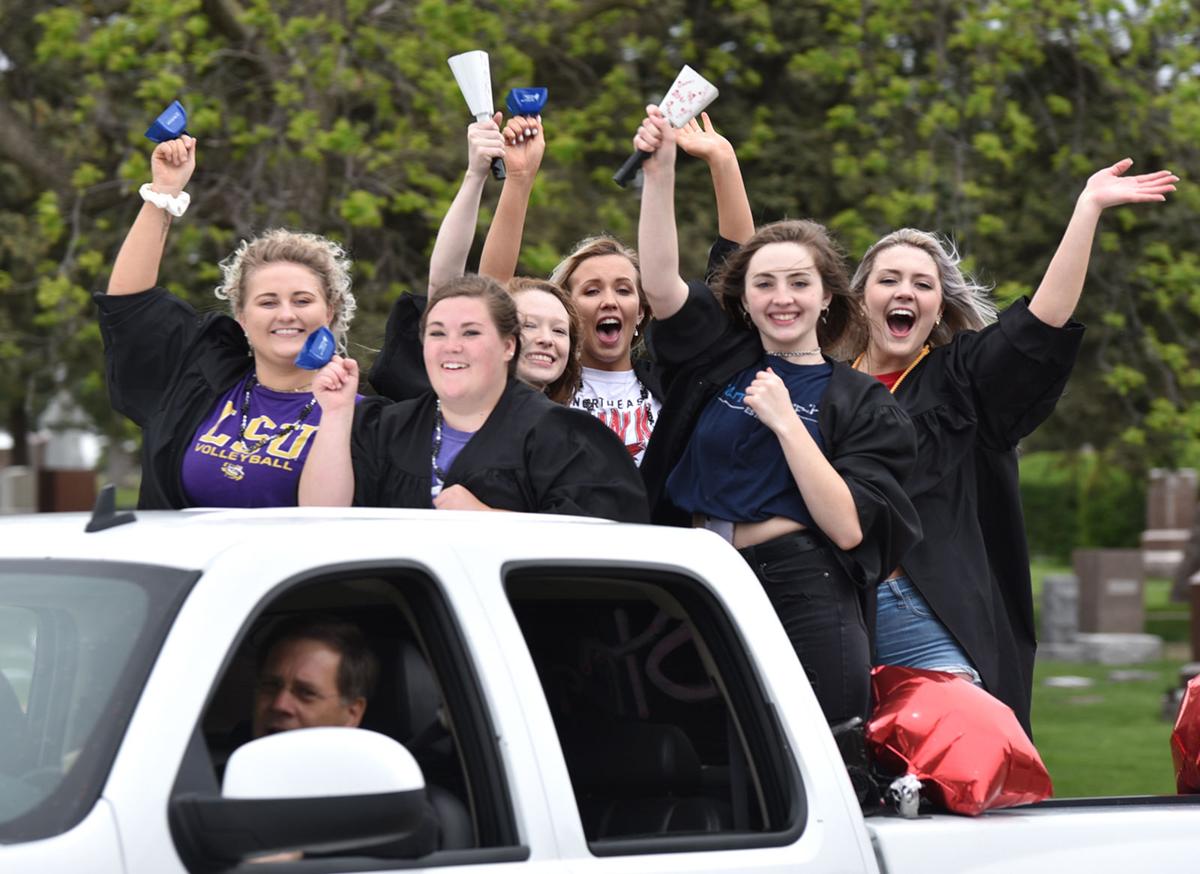 Members of the Yankton High School Class of 2020 were in the spotlight during a special parade held Saturday in Yankton. Since YHS will not be holding an in-person commencement this weekend, several parents developed the idea of a parade winding through the community. Many people were spread out along the route to cheer on the graduating seniors. To view videos and a slideshow from the parade and other graduation festivities, visit www.yankton.net. 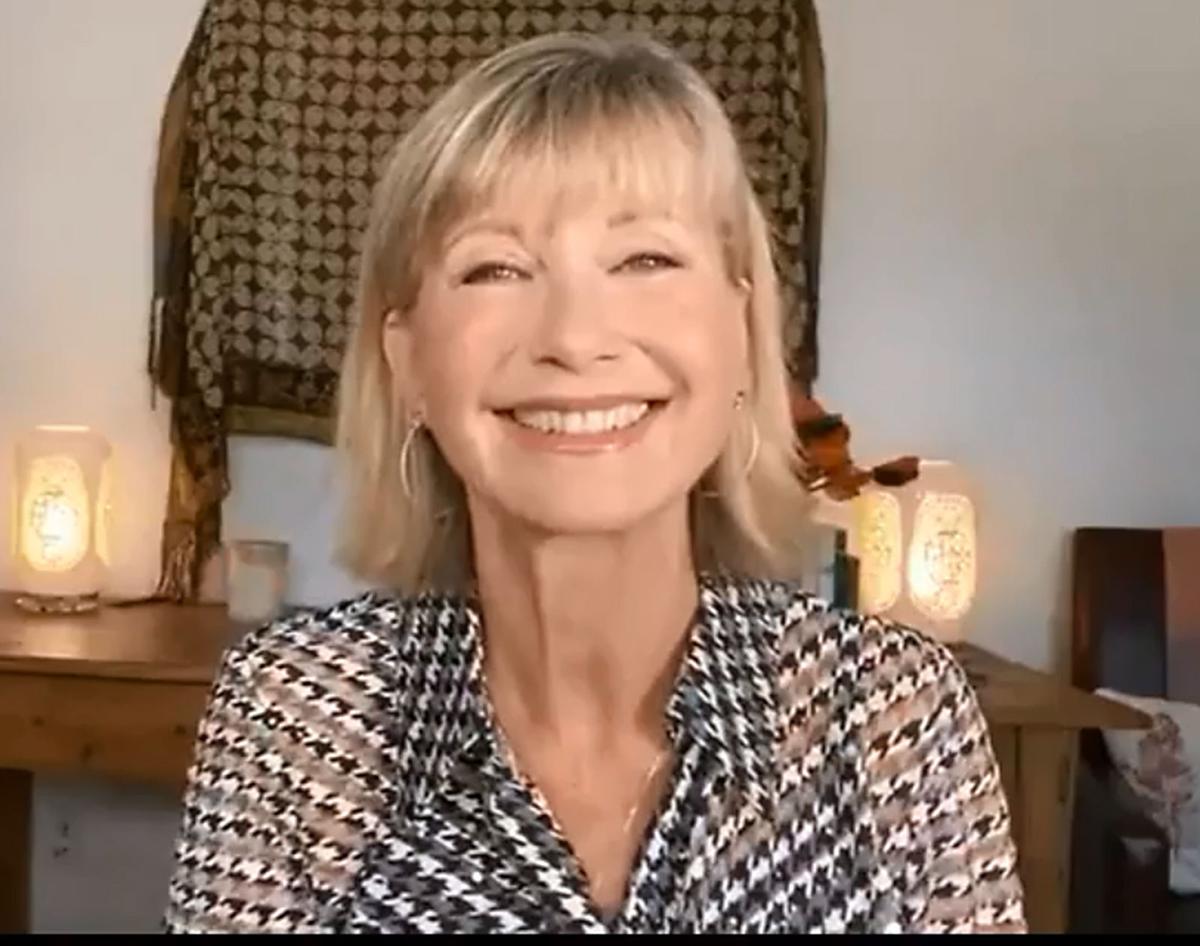 Members of the Yankton High School Class of 2020 were in the spotlight during a special parade held Saturday in Yankton. Since YHS will not be holding an in-person commencement this weekend, several parents developed the idea of a parade winding through the community. Many people were spread out along the route to cheer on the graduating seniors. To view videos and a slideshow from the parade and other graduation festivities, visit www.yankton.net.

The pandemic forced cancellation of the YHS spring musical, “Xanadu” — so the movie version’s star, Olivia Newton-John, stunned graduates by speaking at their virtual commencement ceremony.

Newton-John’s career has spanned five decades. She has sold more than 100 million albums and recorded 10 No. 1 hits, along with winning four Grammy Awards and numerous Country Music, American Music and People’s Choice Awards. She received her breakthrough movie performance in 1978, co-starring with John Travolta in “Grease,” and she danced with Gene Kelly In the movie “Xanadu.”

In addition, she has survived battles with breast cancer, sang at the Vatican at the request of then-Pope John Paul II, and sang for an estimated worldwide audience of 4 billion at the Opening Ceremony of the 2000 Summer Olympics in Sydney, Australia.

YHS theater director Amy Miner reached out to Newton-John, who agreed to produce a video for the ceremony.

“I just did it on a whim,” Miner said. “I didn’t tell anybody because you didn’t expect it to happen.”

Miner was seeking some meaningful, memorable way to honor the seniors.

Miner wanted more for the Class of 2020.

“I know our seniors, and they’re a special group,” she said. “I wanted them to have a spectacular send off.”

“I was thinking, ‘Xanadu … Olivia Newton-John?’ Oh, what the heck, what can it hurt to ask?” she said.

“I always throught (Newton-John) seemed like a lovely person. I always loved her performances,” Miner said.

“She wanted to do good things in the world before the pandemic. She was raising funds for (battling) wild fires in Australia. She wanted to use her celebrity for good. She’s an inspiration to a lot of followers.”

Miner follows the actress/singer on Twitter and Facebook, and she figured it would be the best way to reach the celebrity or her agent.

“I sent her an email and suggested, ‘If you were inclined, would you mind saying a few remarks to the graduates of Yankton and the ‘Xanadu’ cast?’” Miner said. “I explained that our kids were really disappointed (at the cancellation) because they wanted to perform ‘Xanadu’ so badly. I sent some still photos and video from our rehearsals.”

Graduation was three weeks away, and Miner realized it would be a time crunch, if Newton-John would respond at all.

The YHS director didn’t need to wait long for an answer.

“I was so surprised, I heard back in a day. Her agent said, “Olivia would love to do it. When do you need it?” Miner said.

Miner left the message itself to the actress/singer.

“I told them, ‘She’s Olivia Newton-John. She can say anything she wants! Don’t let me be putting words into her mouth!’” Miner said. “I was so excited, I was doing the happy dance all around the room!”

Miner notified YHS principal Jennifer Johnke about the new “addition” and asking if Newton-John’s video could be incorporated into the ceremony.

It didn’t take Johnke long to give a response.

“Dr. Johnke started doing the happy dance all over her office,” Miner recalled.

Newton-John provided a 20-second video, tailored for the YHS graduates, which ran during the online ceremony. She offered the following message:

“Hello, Yankton High School graduates! This is Olivia Newton-John. First of all, congratulations for graduating!” she said.

“And secondly, I’m sorry to hear that you had to cancel the production of ‘Xanadu’ because of the pandemic. That must have been really disappointing, but just remember that, this too, will pass and you will get to do it eventually, and it’ll be a lot of fun. I had a lot of fun making the movie. So sending you all the best! Please stay safe! Bye!”

On Sunday morning, Miner had sent a “reminder” to students, advising them to watch the virtual graduation. “There’s a tiny surprise we thought you might enjoy,” she wrote in her teaser message.

And then … the screen shifted to an image of Newton-John, apparently in her home.

The graduates included twin sisters Claire and Cecilia Kouri, who were watching the video together. Claire had performed in 11 YHS productions, receiving the MVP Theater Award, while Cecilia had worked with the tech crew for 12 productions.

During the introduction of the guest speaker, Claire thought it might have been Tim Hausmann, a 2002 YHS graduate who has performed on Broadway and with national tours and regional productions. Hausmann had returned to Yankton this spring to join “Xanadu” as a guest artist playing Danny Maguire, a role originated by Gene Kelly in the 1980 movie.

“When Olivia Newton-John came on, I was so shocked. It was the craziest thing ever. I was, like, the open mouth with your hands to your face, just like (the character Kevin) in the movie ‘Home Alone,’” she said.

“All I could think was, ‘Oh, my gosh! I can’t believe this is happening!’ I was so obsessed with ‘Grease.’ If you had told me that Olivia Newton-John would be speaking at my graduation, I would have said, ‘No, way!’ But here she was on screen, and I was losing my mind.”

Miner received immediate feedback from students and others. The video received more than 20,000 views on Instagram and 200 views on the Facebook page for the YHS spring musical.

“I knew it was going to be a great surprise, and it was really going to put a smile on people’s faces. It’s been a very heavy spring (emotionally), and we all needed it,” the director said.

“Here you had Olivia Newton-John — who didn’t have to do anything for us — go out of the way to make the day so special. She gave 30 seconds of uninterrupted attention to us for a shout out. It was such an act of kindness on her behalf, and it was a wonderful message for all of us.”

Claire Kouri expressed her gratitude to Miner for arranging the surprise.

“What I love about Miss Miner, she pushes the boundaries, and she is just so positive about things,” Kouri said. “She is also loving and understanding and just genuinely nice.”

Miner returned the compliment, noting the Class of 2020 has shown strength in overcoming the past two months.

“It goes back to the three graduation speeches, where the girls spoke about compassion and kindness. They asked, ‘What will your kindness be? And how can you put that kindness out into the world?’” Miner said.

“This class has shown they know how to take care of their friends, checking in and taking care of each other. But they have also gone outside their circle to help others. They look to do good for those around them.”

Miner would love to reschedule “Xanadu” for summer 2021, bringing back the recently graduated seniors. Regardless, the class members have shown their desire to achieve great things in the world, she said.

“I love their resiliency. I love their ability to grieve the things they lost this spring, but I also love their optimism,” she said. “These are spectacular kids, and they’re going to be OK.”

SLIDESHOW: A Salute To 2020's Seniors

It was an awesome parade. All the kids seemed to enjoy it. The wonderful folks of Yankton came out to encourage and celebrate them. Just wanted to say a special Thank You to the Mom's who made it happen. I know my daughter and her friends spent hours and hours making sure that every single kid had a sign...The class of 2020 will never be forgotten. Great job to all!