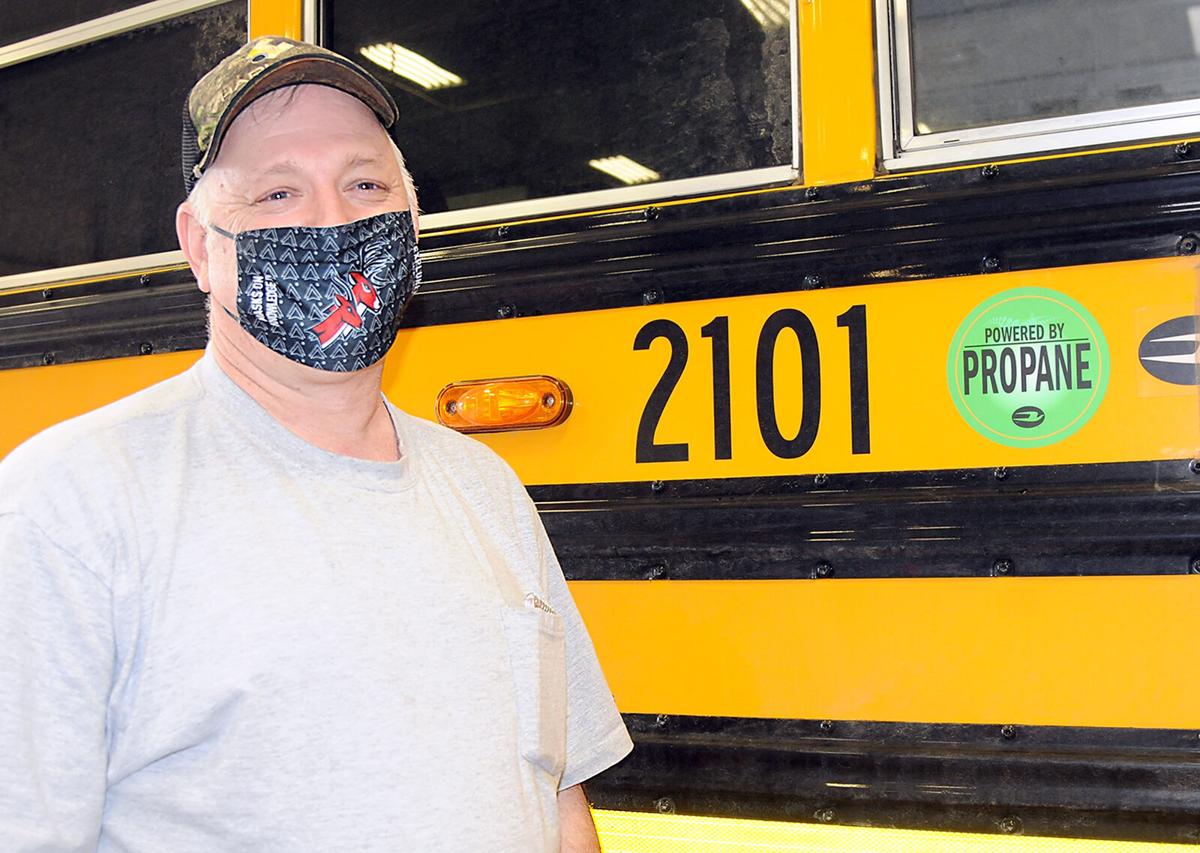 Tony Anderson, the Yankton School District transportation supervisor, stands next to one of the district’s new propane buses. Yankton and Gayville-Volin are among six South Dakota school district chosen for a grant program to encourage the purchase of propane buses. 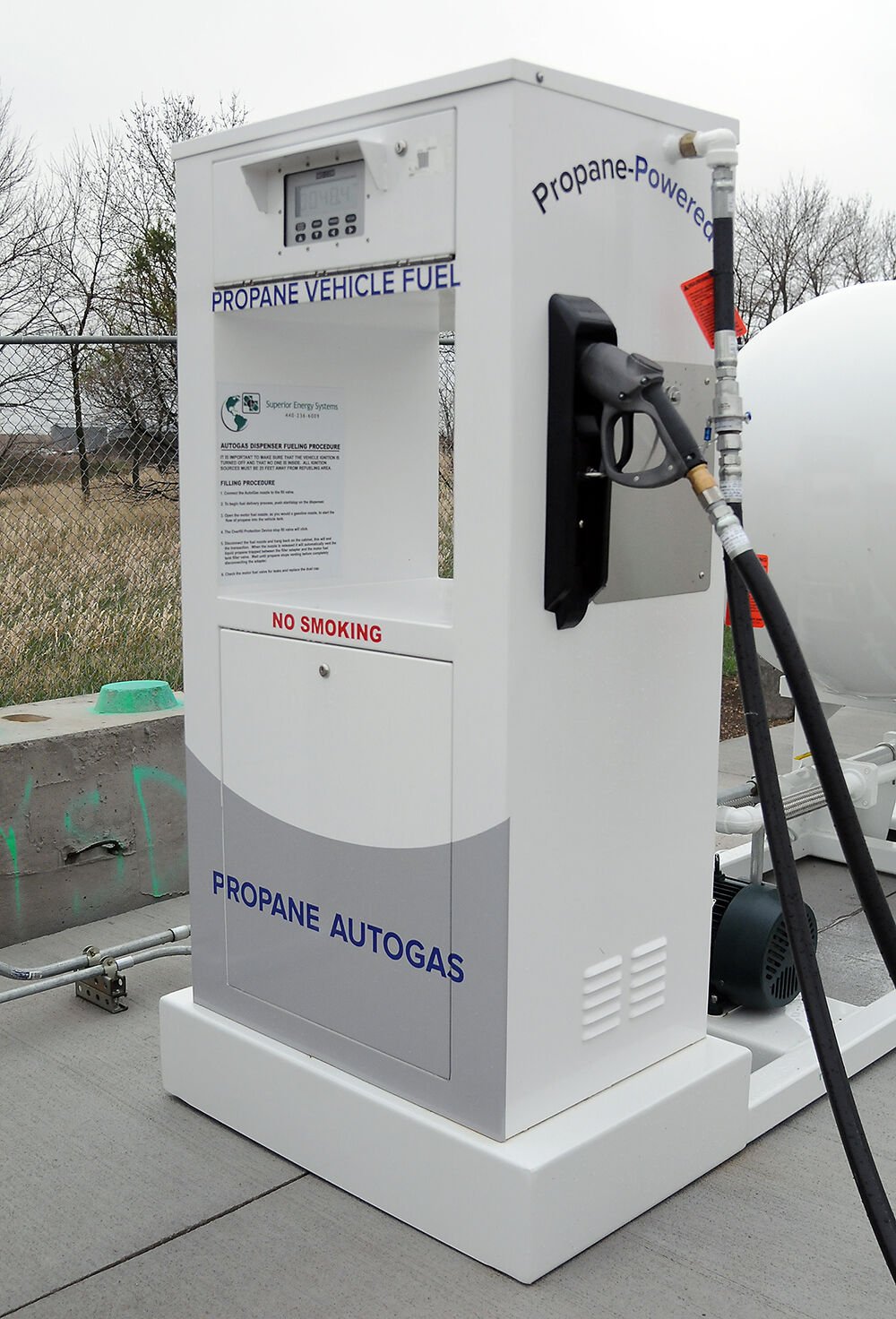 The Yankton schools maintain a propane filling station near the district bus barn.

Tony Anderson, the Yankton School District transportation supervisor, stands next to one of the district’s new propane buses. Yankton and Gayville-Volin are among six South Dakota school district chosen for a grant program to encourage the purchase of propane buses.

The Yankton schools maintain a propane filling station near the district bus barn.

The vehicle may look yellow, but Tony Anderson refers to it as the “green bus.”

Anderson serves as the transportation supervisor for the Yankton School District. He gives the “green” title to two new members of the 29-bus fleet purchased from the Blue Bird Company of Minnesota.

“Our buses all look the same until you look above the door of these two new buses. They’re propane-fueled, while the rest use diesel fuel,” he said. “You see a green-colored bird on the propane buses because they’re ‘green’ vehicles that are environmentally friendly.”

Other unique features of the new buses include a special “propane” sign on the side and the different-shaped area for filling the tank.

Besides Yankton and Gayville-Volin, the other four schools receiving the DENR funds included Brookings, Harrisburg, Lennox and Madison Central.

“Gayville-Volin is excited to receive the Clean Diesel Grant and with the incentive program. We plan to purchase two new propane buses,” Superintendent Jason Selchert said. “We have received the grant in the past but used it to purchase newer diesel engine-powered buses.”

Selchert pointed to the benefits of purchasing propane buses.

“The whole purpose of the program is to replace older and higher fuel emission engines with cleaner burning technology,” he said.

The districts chose the Blue Bird Vision Propane buses, according to a news release. The buses emit fewer greenhouse gases, smog-producing hydrocarbons and nitrogen oxides compared with the diesel buses they will replace. In addition, propane operating costs are significantly lower.

As a result, the Yankton and Gayville-Volin school districts received DENR funding to cover 35% of the purchase price for the new propane buses. The propane buses also qualify for federal alternative fuel excise tax credits, which cover 36 cents per gallon of propane purchased.

Yankton operates its own propane filling station, which is automatically monitored and refilled by an outside party, Anderson said. In contrast, he must monitor the underground diesel tanks and ensure they are refilled, along with switching between winter and summer versions of diesel fuel.

“I switched over to summer fuel during Easter weekend, but I have to keep watch so we don’t get (a return to wintry weather),” he said. “If you have the wrong type of diesel during cold weather, it gels and then you’re stuck.”

At Gayville-Volin, the current fleet consists of six diesel-powered buses, with five of them used for daily routes, according to G-V instructor Tyler Wuebben, who works with the buses.

“The fill station is very easy and safe to use to fill the new buses,” he said. “Propane is non-toxic and non-poisonous. It poses no harm to groundwater, surface water or soil. It doesn’t spill, pool or leave any residue when released but dissipates into the air.”

Propane is one of the cleanest burning engines right now, which is important when students are waiting for or riding in the buses, Anderson said.

“It’s a big deal when you’re working with school kids,” he said. “Years ago, when you had diesel, you had a lot of black smoke that the kids were breathing in.”

Selchert echoed those thoughts. “The purpose of the program remains getting higher emission student transportation off the roads, and we believe the propane engine will do that for the health of our students,” he said.

Anderson pointed to the quieter ride of propane buses, similar to a car. “The kids like it because it’s quiet, and then you can hear the students and keep a lot better track of them,” he said.

Because of tougher government standards, diesel buses have implemented features to reduce their emissions, Anderson said. Those additions have added to the bus costs, and diesel vehicles still don’t burn as cleanly as propane buses, he added.

Yankton has committed to purchasing a total of six buses during a three-year pilot program. Buses usually run $100,000-125,000 each, but the pilot program reduces those costs dramatically for propane buses.

The district purchased its first two propane buses last August through the DENR program. The district will purchase another two buses in each of the following years.

The three-year pilot program allows Yankton to evaluate the buses, Anderson said. After three years, the district can decide whether to keep the propane buses or sell them back to the Blue Bird company.

He likes what he sees so far, but he continues monitoring the buses’ performance. He’s also checking whether the government and private incentive programs continue.

“With their lower maintenance, cleaner emissions and quieter ride, we plan to keep buying propane buses,” Anderson said. “We won’t do that all in one year, but we’re looking at making the change over time.”

Currently, Yankton operates an onsite propane fueling station. The district pays about half the cost for propane autogas compared with diesel per gallon.

Propane school buses reduce harmful nitrogen oxides by 96%, according to a 2019 study by West Virginia University. Exposure to nitrogen oxide exhaust can have negative health effects on children and is a leading cause of asthma, according to the EPA.

At Gayville-Volin, transportation director Pat Haisch has researched the program and the propane technology, Selchert said. The district decided to use propane buses based on its research and the current use with other South Dakota districts.

“Actually, propane-powered engines have been around for a long time and are really efficient and just as safe for student transportation as gas or diesel,” Selchert said. “(Pat) Haisch has talked with a few area districts who have jumped into propane power, and they — Harrisburg and Yankton — have been satisfied with what they found.”

Gayville-Volin has seed tremendous cost savings under the grant program, Wuebben said. The buses originally cost $100,290 each but the grant reduced the cost to $70,203 each. The new propane buses each hold 71 passengers, with plans to use the buses for daily routes and activities closer to home.

“I don’t foresee us completely going away from diesel buses due to the fact that it is easier to find fuel for the diesel bus when we go on longer trips,” he said. “I could see our school eventually replacing our route buses with propane-powered buses and keeping a diesel-powered bus for our longer-distance activity trips.”

Yankton has taken the same approach in its decision not to take the propane buses on long activity trips, Anderson said.

Anderson and Wuebben both point to the easier and less expensive maintenance costs for propane buses. While a diesel bus may get 6-8 miles per gallon and a propane bus gets about five, the lower propane price means about half the cost for filling up the bus.

Selchert said he has seen similar shifts in fuel usage during his career.

“What still needs to be worked through for the district is the implementation of filling stations and securing bulk delivery for the propane,” he said. “I have been in Gayville-Volin for 25 years, and in the beginning we only had gas tanks. Then we expanded and had to install additional diesel fueling equipment. I guess the natural evolution of the process will be to now have propane filling tanks for our transportation needs.”

Anderson agreed, noting districts also want to get away from disposal of the diesel exhaust fluid (DEF), which is removed from that fuel source.

“It’s slowly coming around in South Dakota where there are more places with propane. I think you’re going to see more and more of it,” he said. “The three basic things we’re looking for are the price of propane, the longevity of the buses and the maintenance you are going to need.”

However, there’s one consideration that can’t be measured in dollars and cents, Anderson said.

“We’re hauling kids, who are the most precious cargo you can have,” he said.

For Rent: 2-bedroom apartment in Yankton with garage and laundry