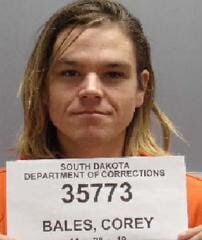 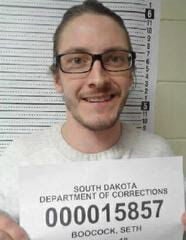 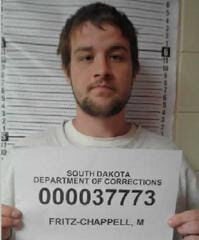 According to the South Dakota Department of Corrections, inmates Seth Boocock, Corey Bales and Matthew Fritz-Chappell all left the Yankton Community Work Center without authorization shortly after 11 p.m. Friday, Nov. 27.

Boocock is a white male, age 30. He is 5-feet-9 inches tall and weighs approximately 180 pounds. He has brown hair and brown eyes. Boocock is serving a 10-year, 9 month sentence for aggravated assault from Minnehaha County.

Fritz-Chappell is a white male, age 25. He is 6-feet tall and weighs approximately 200 pounds. He has brown hair and hazel eyes. Fritz-Chappell is serving a 3-year, 9-month sentence for possession of a controlled substance from Yankton County and a 3-year, 3-month sentence with 1-year and 6-months suspended for possession of alcohol or marijuana by an inmate from Bon Homme County.

Leaving a non-secure correctional facility without authorization constitutes second-degree escape, a Class 5 felony punishable by up to five years in prison.

If you see the inmates or know of their whereabouts, contact law enforcement immediately.

These 3 must be "not smart" at all--now they may end up in not as nice surrounding s!