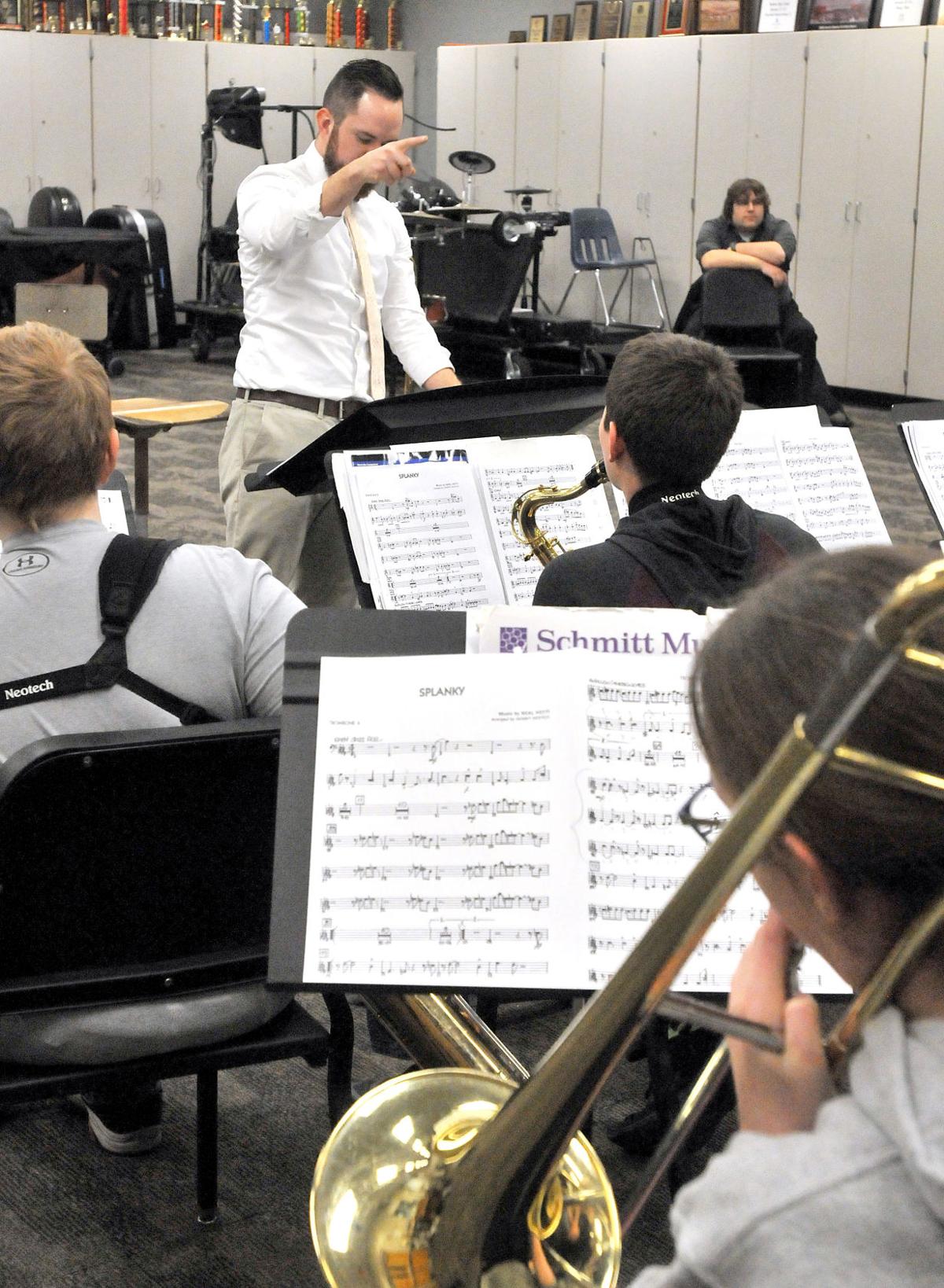 The first ever Middle School All-State Jazz Band festival is being held in Yankton this weekend. The two ensembles will perform a concert today (Saturday) at 3 p.m. Pictured is clinician Ben Harder conducting the Festival Band. 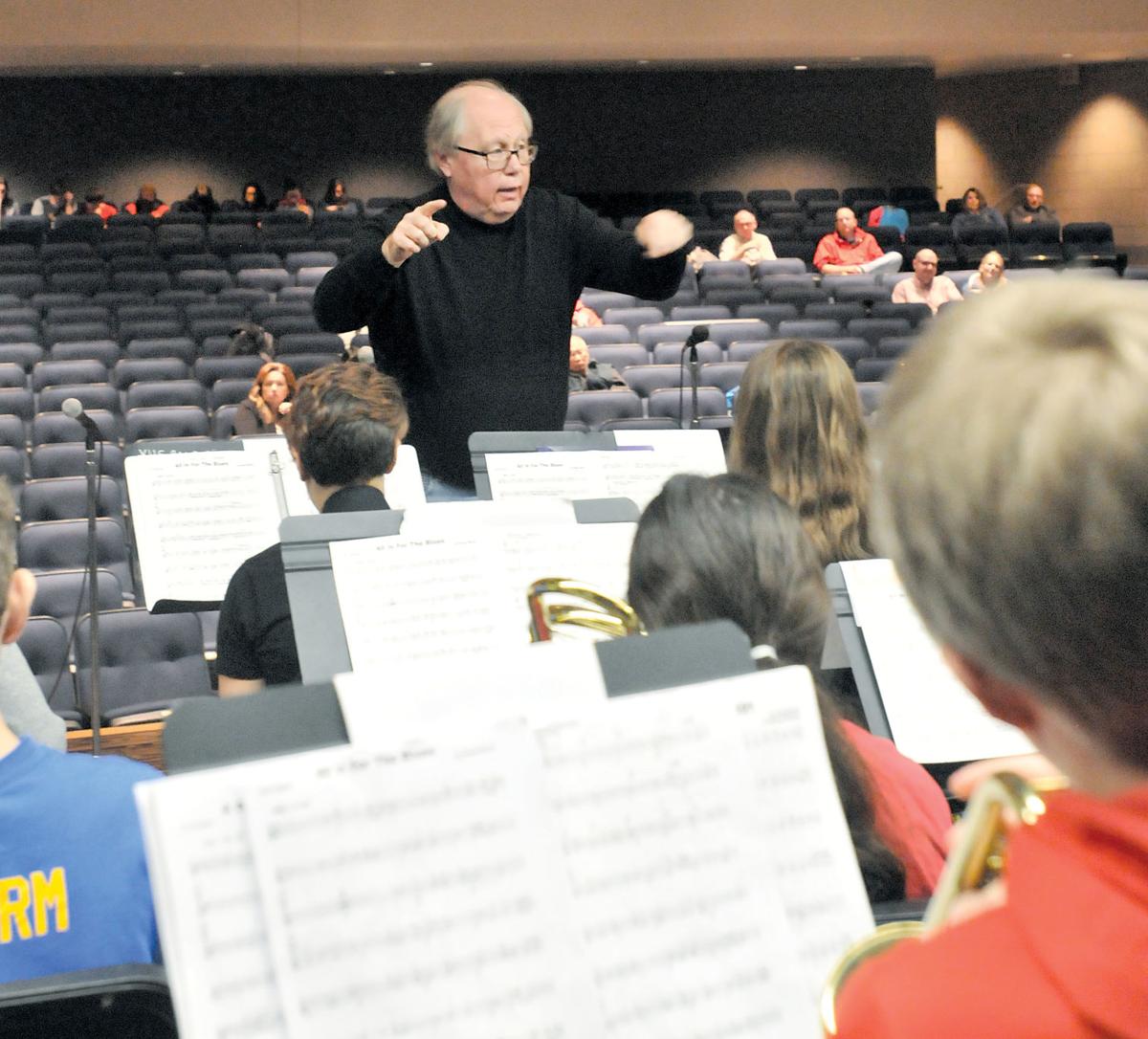 Clinician Doug Beach directs the Honor Band during rehearsals at the Middle School All-State Jazz Band Festival being held at the Yankton High School this weekend.

The first ever Middle School All-State Jazz Band festival is being held in Yankton this weekend. The two ensembles will perform a concert today (Saturday) at 3 p.m. Pictured is clinician Ben Harder conducting the Festival Band.

Clinician Doug Beach directs the Honor Band during rehearsals at the Middle School All-State Jazz Band Festival being held at the Yankton High School this weekend.

A sense of excitement ran through the Yankton High School band room and theatre on Friday, when two of the most respected jazz clinicians in the country raised their hands and gave the down beat to nearly 40 middle school jazz musicians in Yankton for the first-ever Middle School All-State Jazz Band weekend.

What happened next surprised even the conductors.

“In the other room, Ben (Harder) was kind of tense, and then they played through that first chart, and he just paused, stepped over and was like, ‘All Right!’” said Yankton High School band director Todd Carr. “You could tell he was relieved with what he heard. Every school has their own way of teaching; every student has their own way of learning. You have essentially brought 40 artists into one place and said, ‘OK, you guys get along.’ With the clinicians that are here, they will carve them into quite a couple of groups.”

Laura Schenk, co-chair of this weekend’s festival and treasurer of South Dakota Music Education Association, said this inaugural Middle School All-State Jazz Band was an idea whose time had come.

The plan: form two separate ensembles from an adjudicated audition process of jazz musicians from the middle schools of South Dakota.

“We used a really similar format to the audition process for All-State Band where each student auditioning had to learn a variety of scales in both concert and jazz styles and then play two different etudes in contrasting styles,” Schenk said. “They each record their auditions and send them in, where they were judged in a blind audition. The judges don’t know who they were or where they were from when they were listening to the audition tapes.”

From the nearly 65 students to audition from 19 school districts across South Dakota, the bands were formed including sixth-, seventh- and eighth-graders.

“It is nice to see the young talent coming up in the state,” Schenk said. “There is a lot of challenge in this. I think it is great for these students to be exposed to a higher level of literature than they might be exposed to in their own schools. They are playing with the best musicians from around the state and are being exposed to amazing clinicians.”

Beach is a world-renowned jazz educator, performer, composer and publisher and who has won a Grammy Award for his work.

“We were thankful that he was able to come,” Schenk said. “He even composed a piece for us that will be premiered at our concert (Saturday). Then, Ben Harder, who is doing our other group, has a master’s degree in jazz performance and jazz education. I just don’t think you can get better clinicians than that for these young musicians to learn from.”

Carr said he was impressed with the level of the two conductors brought in.

Beyond the two conductors, the students will also have a clinic experience provided by CJ Kocher and a jazz band he is bringing.

“They will be doing an improv clinic and little combo performance to give the kids a break from playing and a great education while they are here,” she said.

The student musicians received their music the week of Jan. 9, so they have had a month to work with the music and about nine hours of rehearsal time together before performing their concert today (Saturday).

“The kids that we are listening to are some of the best, if not the best, middle school jazzers in the state,” Carr said. “I am excited because when you hear these kids playing this caliber of stuff, you see where things are at and can judge what the state is up to. It challenges you and you can say, ‘OK, this is where we are at; let’s go to the next level. If they are playing this, what should we be doing?’”

Carr noted that even though there are no students from the Yankton School District participating this year, the community should still take the time to attend the event.

“You will see what is happening across the state as far as jazz education,” he said. “We have the great concert organization here in town, but we are going to start to see more jazz artists and more kids involved in jazz. These kids deserve an audience and you will enjoy it if you come and listen.”

It was a thought echoed by Schenk.

“We are really hoping people come out (Saturday) and have a chance to see what these young musicians can do,” she said. “We would really love for everybody to get a chance to enjoy what they are doing, especially since we do have a world premier piece ‘A Darker Shade of Blue’ that will be performed. It is going to be a wonderful concert, so we hope the public comes out and support it.”

Schenk also noted that without the festival’s main sponsors — Yamaha, Poppler’s Music, Schmitt Music and the Sioux Falls Jazz and Blues Society — this event would not have been possible.

The concert will be held in the Yankton High School Theatre at 3 p.m. today (Saturday). Tickets are $5 for adults and k-12 students are free. The tickets are available at the door beginning at 1:45 p.m. and it is general seating.