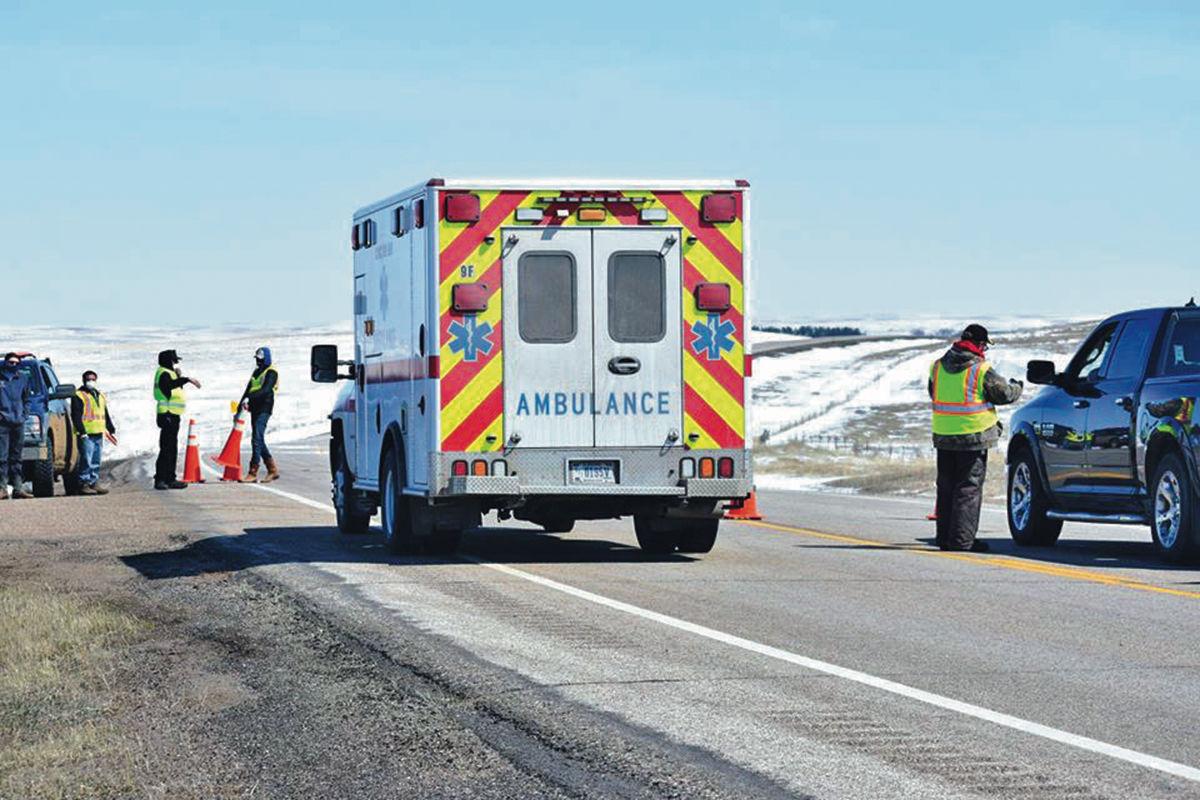 An ambulance is waved immediately through a highway checkpoint operated by the Cheyenne River Sioux Tribe. Tribal leaders say the checkpoints help control the flow of people onto and off of the reservation and gather critical health information to maintain the safety of residents on the reservation amid the COVID-19 pandemic. 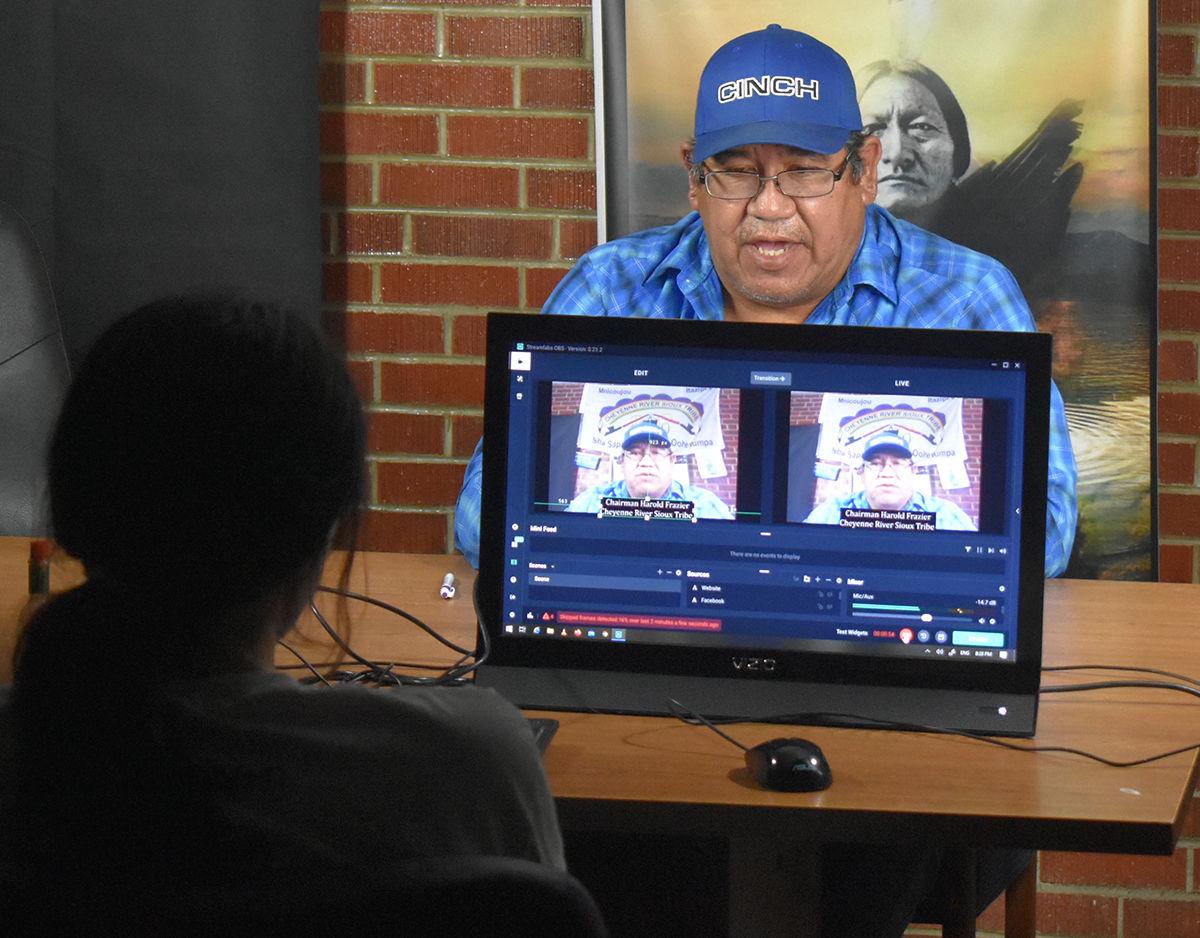 An ambulance is waved immediately through a highway checkpoint operated by the Cheyenne River Sioux Tribe. Tribal leaders say the checkpoints help control the flow of people onto and off of the reservation and gather critical health information to maintain the safety of residents on the reservation amid the COVID-19 pandemic.

EDITOR’S NOTE: This article was produced with support from the Solutions Journalism Network, a national non-profit group that supports rigorous journalism about responses to problems.

The Cheyenne River Sioux Tribe in north-central South Dakota has received extensive state and national press coverage in recent days after Gov. Kristi Noem threatened legal action if the tribe did not dismantle highway checkpoints it is using to manage traffic flow amid the COVID-19 pandemic.

The stalemate between the governor and the Cheyenne River and Oglala Lakota Sioux tribes remains, with checkpoints on state and federal highways still in place and Noem seeking but not yet finding a resolution to the conflict.

The controversy over the checkpoints has obscured the extensive and thus far highly successful effort of the Cheyenne River Sioux Tribe to prevent the deadly virus from infecting its roughly 12,000 residents, many who are poor or at high risk of complications or death from COVID-19.

As of May 19, the virus had infected nearly 4,100 people in South Dakota, including, according to tribal leaders, about 260 Native Americans.

But the sprawling Cheyenne River Indian Reservation has seen only one COVID-19 case in a woman who has since recovered. The tribe’s efforts to prevent the spread come as other American Indian tribes have suffered high numbers of cases, including the Navajo Nation in the southwestern U.S., where the rate of infection per 1,000 residents is now higher than in New York.

Compliance with mandatory and voluntary public-health efforts has been strong on the reservation, as many residents realize the great risk the virus poses to the population, and understand the limited ability of the tribal health-care system to react to a major outbreak.

“That makes it more dangerous for us, and there’s a mutual sense of safety as a result,” said Lt. Joseph Brings Plenty of the tribal police department.

In February, tribal leaders quickly realized they were not prepared on any front. The hospital in Eagle Butte had eight beds, six respirators and no intensive-care capacity. The nearest ICU hospitals were about 170 miles away in Rapid City or Bismarck, N.D.

Tribal officials, Bald Eagle said, quickly realized that they would have to take aggressive steps to prepare for widespread infection and the aftermath on a remote reservation where thousands of residents are poor, live in close quarters, have few transportation options and limited access to health care.

The effort that has taken place in the two months since then has involved almost every entity in local and tribal government, numerous elements of the health-care community, private businesses and a strong base of volunteers, Bald Eagle said.

“The checkpoints are just the tentacles, or the edges, of a larger system that we have implemented to protect the population on the reservation as a whole, both tribal members and non-members,” he said.

The tribe has taken several steps to protect its elderly residents, who are cherished in Lakota culture but also are at higher risk of death from the virus.

The tribe locked down its nursing home and placed all residents under strict quarantine, Bald Eagle said.

Officials also made a roster of all elderly residents who were living on their own and created a program in which a medical professional or volunteer calls each homebound elderly resident daily to check on him or her. On a recent day in mid-May, 93 elders were reached at their homes.

Danette Serr, director of nursing for Tribal Health Services, said the tribe was not initially prepared to handle a COVID-19 outbreak if it did occur.

The tribal medical staff has only two doctors, one physician’s assistant, one nurse practitioner and 11 nurses. The Cheyenne River Health Center has only eight beds and until recently, the tribe had only 18 tests for COVID-19.

In the past couple months, the tribe has prepared auxiliary spaces within government buildings that can house up to 34 patients, and has distributed masks and gloves to all medical employees.

On Monday, May 18, Serr was leading a new effort to implement testing for COVID-19 among all essential employees on the reservation, starting with about 100 members of the law enforcement and public safety departments. About 200 more nasal-swab tests will be done on other tribal government employees through the week, and face masks were being delivered to residents, she said.

The tribe also created a food program that not only collects and stores food and supplies but also delivers them to individual households.

The program also led to the storage of thousands of pounds of frozen meat and other foods.

Local ranchers, both tribal and non-tribal, donated three dozen head of cows for processing, and the tribe slaughtered elk and buffalo from its managed herds to provide meat for those in need and for freezing.

The tribe placed restrictions on essential stores, including the only grocery store and two dollar-stores — with a rule that no child under 16 be allowed in “due to the difficulty they have in social distancing,” Bald Eagle said. All patrons and employees must wear protective equipment, including masks.

The tribe has shifted existing funding from shuttered programs such as child care or other in-person government programs to pay for new efforts to fight the virus. The tribe is also expected to receive a $20 million payment from the CARES Act bailout program passed recently by Congress, Bald Eagle said.

In its most visible and now controversial move, the tribe installed checkpoint teams at nine locations on improved roads heading into the reservation, including on U.S. 212 and on state roads 20, 34, 63 and 65.

Tribal members or those who are simply passing through the reservation without stopping are typically allowed to drive on, Bald Eagle said. Those without a clear destination, or who may draw the suspicion of checkpoint officers, can be turned away. In a recent week, Bald Eagle said that thousands of vehicles had approached the checkpoints and that only 13 had been turned away.

Tribal Chairman Harold Frazier has made clear that he believes the checkpoints are fully within the tribe’s sovereign rights and that they will remain until the pandemic passes.

Bald Eagle said the tribe has continually improved its processes at the checkpoints and has not heard any serious complaints about the program. He said Gov. Noem has claimed that the state has received numerous complaints, including reports that emergency vehicles, delivery trucks and local ranchers were turned away at the checkpoints.

Maggie Seidel, a spokesperson for Gov. Noem, did not provide specifics to News Watch about the complaints received by the state about the checkpoints. “Lots of people — in and out of state government. Travelers. Business owners who aren’t getting any traffic. Gas station owners who [can’t] get fuel to their service stations. The list is long,” Seidel wrote about the complaints.

The roadway checkpoints are a small part of a wide-ranging COVID-19 response by the tribal public-safety department, said Lt. Brings Plenty.

The tribal agency has hired more than 30 new officers to aid in enforcing laws but also in upholding safety measures related to the pandemic, Brings Plenty said.

For now, unless the political situation changes, Bald Eagle said he expects the checkpoints will remain in place.

Bald Eagle said the tribe’s only known case of COVID-19 was caught due to the efficiency of the checkpoint system.

When a woman returned to the reservation after spending time in Pierre in March, she was asked questions about potential exposure to the virus. The woman told checkpoint officers she had been at a motel in Pierre where an employee was rumored to have been infected, so the woman was immediately placed in self-isolation and monitored for symptoms.

When she displayed symptoms, she was placed in a medical quarantine and eventually transferred to Monument Health in Rapid City, where she received treatment and has recovered. While she was hospitalized, the tribe did two things, Bald Eagle said: The tribe steam-cleaned and disinfected the woman’s home, and officials alerted the state to the potential hot-spot at the motel in Pierre.

“I would rather, when this is all over, be in court or be criticized for overreacting or doing too much than I would to live the rest of my life knowing somebody was hurt or somebody passed away unnecessarily,” he said.

AUDIO: Beyond The Checkpoints