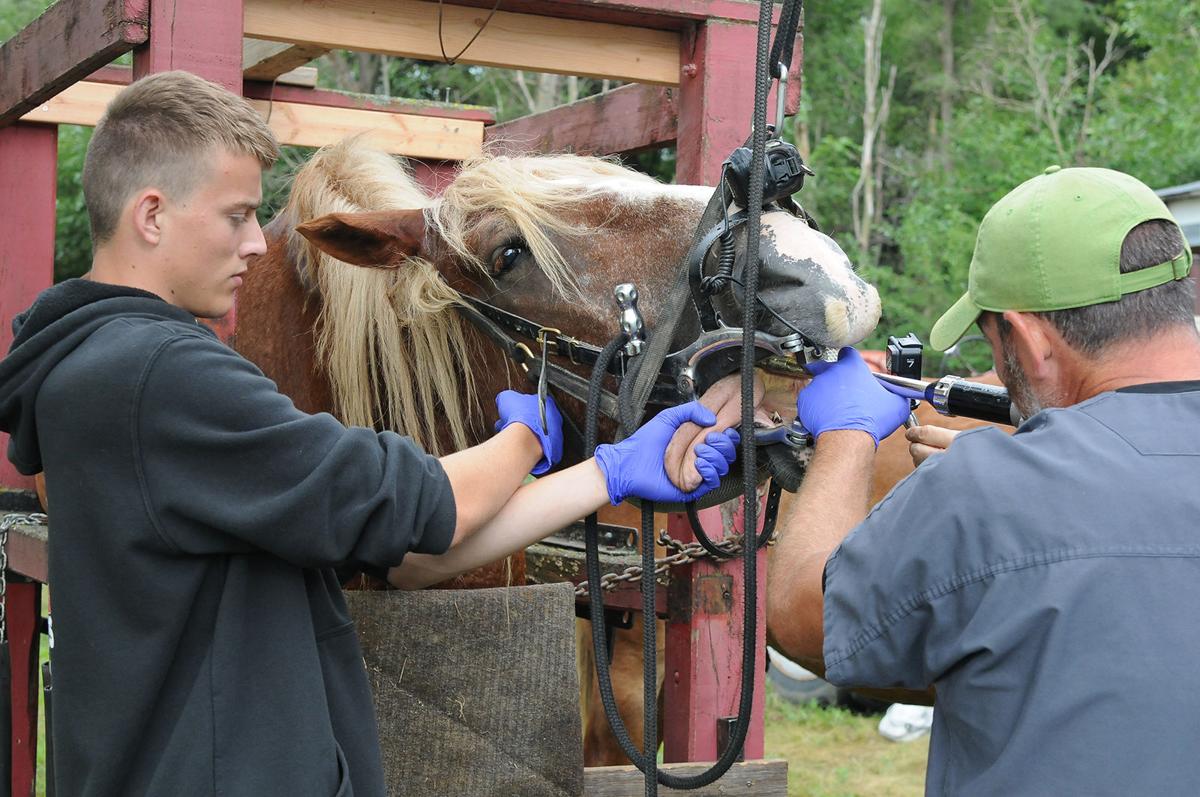 One of the Schroeder sons holds a horse in place during a photo shoot featuring his family on “Heartland Docs: DVM.” The Hartington, Nebraska, family is featured on the six-part series debuting at 9 p.m. tonight (Saturday) on the National Geographic Wild network. 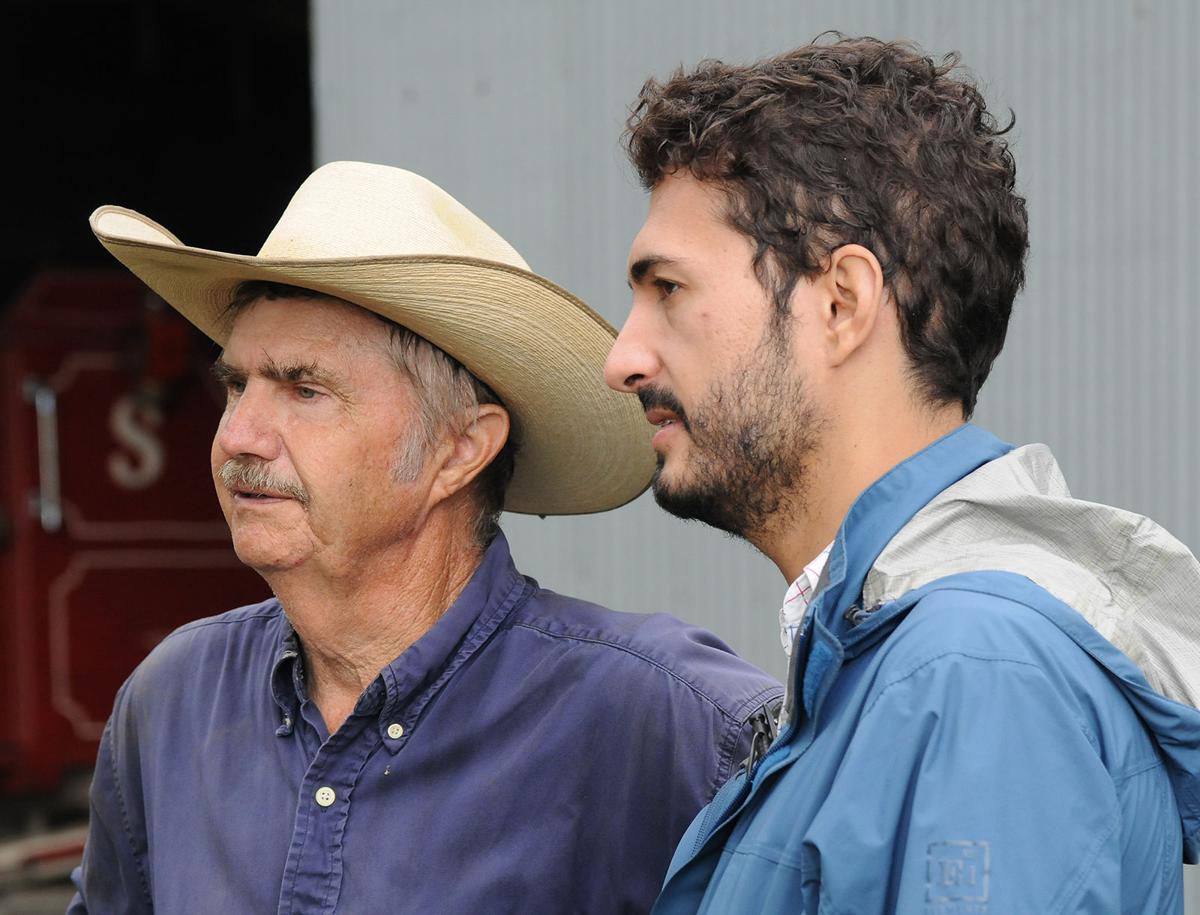 Matt Carter (right), executive producer for the Glass Entertainment Company crew, checks out the scene for a photo shoot. Yankton farmer Alan Sorensen (left) watches the camera work done with his horses in the segment.

One of the Schroeder sons holds a horse in place during a photo shoot featuring his family on “Heartland Docs: DVM.” The Hartington, Nebraska, family is featured on the six-part series debuting at 9 p.m. tonight (Saturday) on the National Geographic Wild network.

Matt Carter (right), executive producer for the Glass Entertainment Company crew, checks out the scene for a photo shoot. Yankton farmer Alan Sorensen (left) watches the camera work done with his horses in the segment.

HARTINGTON, Neb. — Each day, Drs. Ben and Erin Schroeder provide loving care for animals who they consider much more than “patients.”

The husband-and-wife veterinarians operate clinics in Hartington and Vermillion. While well known in the Yankton region, they’re now sharing their story with a national audience.

The Schroeders, along with sons Charlie and Chase, are featured in the network series “Heartland Docs: DVM.” The first of six one-hour shows debuts at 9 p.m. tonight (Saturday) on the National Geographic Wild (NatGeo Wild) network.

The Schroeders said the series provided an inside look at their work. In the process, viewers will learn more about rural life and the value of livestock and other animals treated by the veterinarians.

The series was given the working name of “Homestead Vets,” with the realization it could change, executive producer Matt Carter told the Press & Dakotan.

“We’re hoping — and it’s the hope of every series — that we get picked up for several years,” he said.

In order to get renewed, “Heartland Docs” needs to score ratings. In that regard, the Schroeders have turned out to be every bit — and much more — of what the film crew hoped when the series was sold and the work started, Carter said.

“They offer a broad reach. They are young, very accessible, very articulate, very good looking and they live in the middle of the country,” he said. “This tells the story of their lives, what they do and why they do it. They are very relatable.”

As part of the publicity effort, the Schroeders went Hollywood — literally.

The family headed to California, where they conducted the media blitz that accompanies any new television show or production. While in Hollywood, the Schroeders were featured with hosts on nationally syndicated shows.

On Hallmark Home and Family, the couple chatted with hosts Cameron Mathison and Debbie Matenopoulos. On the show, the hosts were enamored with both the Schroeders and the animals they brought on the set.

At the start of the interview, the Schroeders were asked about their hometown. They noted Hartington has about 1,500 residents, and the region consists of mostly small towns with animals outnumbering people in some places.

“Our county doesn’t even have a stoplight,” Erin said jokingly.

However, the Schroeders reflected their love for their rural lifestyle. They spoke of their passion for their veterinary practice, their love and care for their patients, and the strong bonds they share with their family, friends and neighbors.

On the Hallmark program, the Schroeders showed a segment where they tried to get a calf to drink milk from a bottle after the calf’s mother had died. Erin acknowledged it can become a difficult situation, and Ben even tried the trick of putting the calf in the “knee chute” — holding the calf between his knees, like a simulated chute.

The ploy worked for a few seconds before the calf decided not to cooperate any further.

During the next segment, the Schroeders brought on other animals onto the set. The first “guest” was a lion-headed bunny that Mathison joked matched his grey outfit.

The next guest was a two-month old baby doll lamb. Erin noted that Ben lies down and “spoons” with the lamb’s mother.

Sometimes, you just do what you gotta do, Ben said. The show’s hosts agreed, admitting they would be tempted to join him on the floor with the lamb’s mother.

The next “guest” was a miniature horse named Baby Shark, or “Sharkie.” The hosts marveled at the tiny equine, with Matenopoulos noting that Mathison raised dogs of larger size.

Ben contrasted the horse’s miniature size compared to normal stand and draft horses, making it ideal for young people. “If a horse like this steps on you, it’s not going to break your foot,” he said.

During the segment, the Schroeders spoke about meeting in veterinary school at Kansas State University and becoming engaged after a whirlwind romance.

After graduation, they returned to Ben’s home in the Hartington-Coleridge area of northeast Nebraska where they eventually took over the veterinary practice upon the retirement of Ben’s father, Dr. John Schroeder.

On another media visit, the Schroeders were featured on “Access Hollywood,” where Erin Schroeder met one of her favorite childhood television stars.

“Dealing with media was surreal,” Erin told her hometown newspaper. “You are being asked questions by people and on the sets of television shows you have watched your whole life. Recently, I was sitting on a set being interviewed by Mario Lopez, who I watched on ‘Saved by the Bell,’ and just thinking this is crazy that A.C. Slater is interviewing me. Who does that happen to?”

The media blitz followed them home, as the Schroeders hosted a viewing party Sunday at the Hartington Hotel which they own. The hotel provided the initial link to their television appearance, as the Omaha World Herald featured them as two veterinarians who remodeled their own hotel.

The newspaper article caught the attention of HGTV, which wanted to do a segment featuring their remodeling work on the hotel. However, the Schroeders wanted instead to do a piece featuring their veterinary work — and the rest is history, as Glass Entertainment and NatGeo Wild picked up on the project.

The audience at Sunday’s viewing party included Nancy Glass, CEO and executive producer of the company, and executives from NatGeo Wild.

Early in her career, she was senior correspondent and weekend anchor for Inside Edition. While working at Inside Edition, she became the first person in syndication nominated for a national News Emmy.

During Sunday’s viewing party, the audience watched two episodes. They learned the series would reflect the grit and determination of area residents in overcoming the devastating bomb cyclone, flooding and ice jams which hit the region last March and created havoc which still remains.

Over the course of the past year’s filming, the Schroeders’ “patients” came in all shapes, sizes and species, Carter told the Press & Dakotan.

“They (the Schroeders) have done leg surgery on a chick, removed the tumor from a dog and rescued the eye of a baby opossum,” he said. “They had a touching story of a baby deer they encountered in a field who had lost the use of (its) legs.”

In addition, the Schroeders helped with the delivery of a birth at an inconvenient time, Carter said.

“They had a corgi (dog) who needed a C-section at 7 a.m. on Easter morning,” the film director said. “It didn’t matter; it was out the door.”

The Schroeders’ credo is to not just save the animals America depends on but to make each visit something to look forward to — for both the animals and their caretakers.

Among the clients are Alan and Loretta Sorensen of rural Yankton. One of the segments featured Ben Schroeder’s dental work on their Belgian horses.

“We have always been very pleased with the veterinary services Drs. Ben and Erin provided for our horses over the past 10 years. The friendly, open manner you see on their shows is exactly what we have enjoyed over the years,” Alan said.

“We will always remember the day they filmed here as one of the highlights of our horse adventures. It was great fun for us and we trust those who follow their show will enjoy it, too.”

“From the previews we’ve seen so far, the show’s production crew is top-notch,” she said. “We are itching to see our portion of the show air on Saturday, February 22. We will follow the series now and in the years to come. (We’re) very appreciative of the opportunity to be part of it.”

Ben said he has learned about the hard work that goes into making a television series. He’s less certain what the future holds when the series airs this year.

“It’s all been so surreal,” he said. “We’re not sure what a hit show would mean for our family. We hope it’s a hit show.”

Carter feels confident about the series and can make one prediction.

“This will change their lives, and I believe it will definitely change it for the better,” he said.