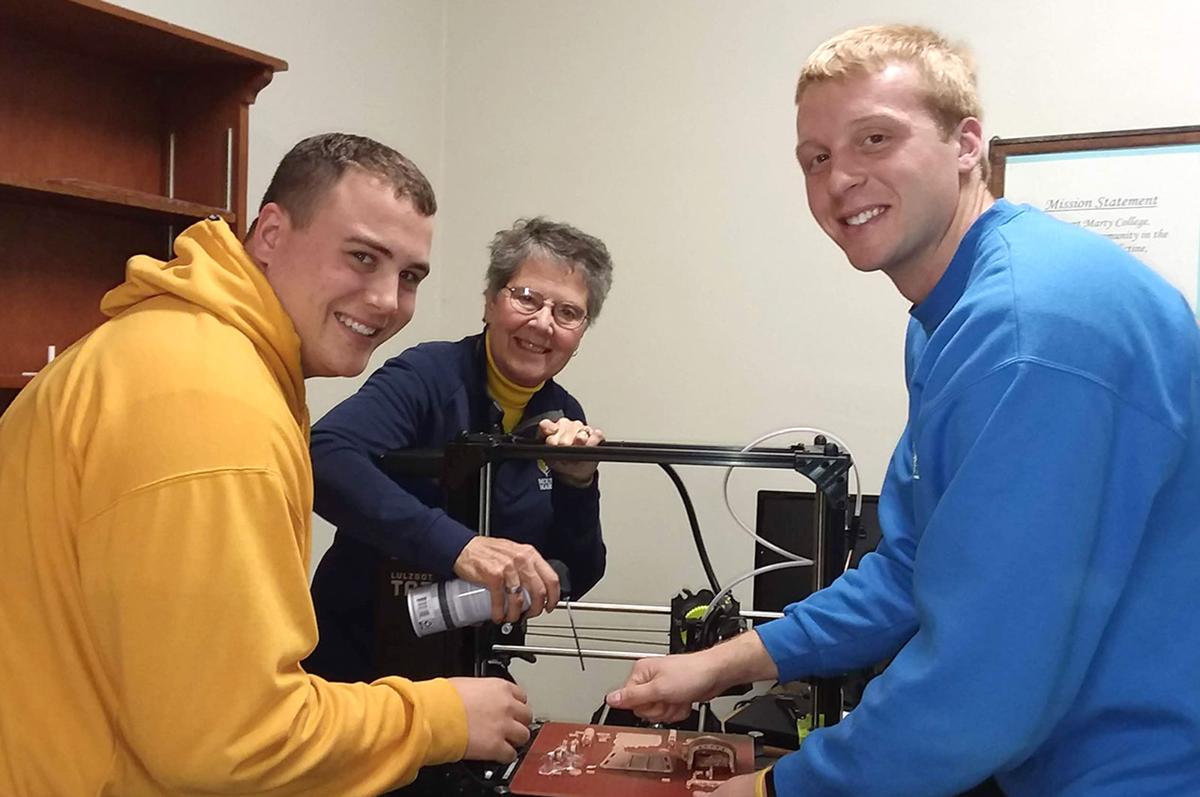 From Left: Christopher Wixon, Sister Bonita Gacnik and Mitchell Lonneman work at the 3-D printer to release printed pieces from the plate. 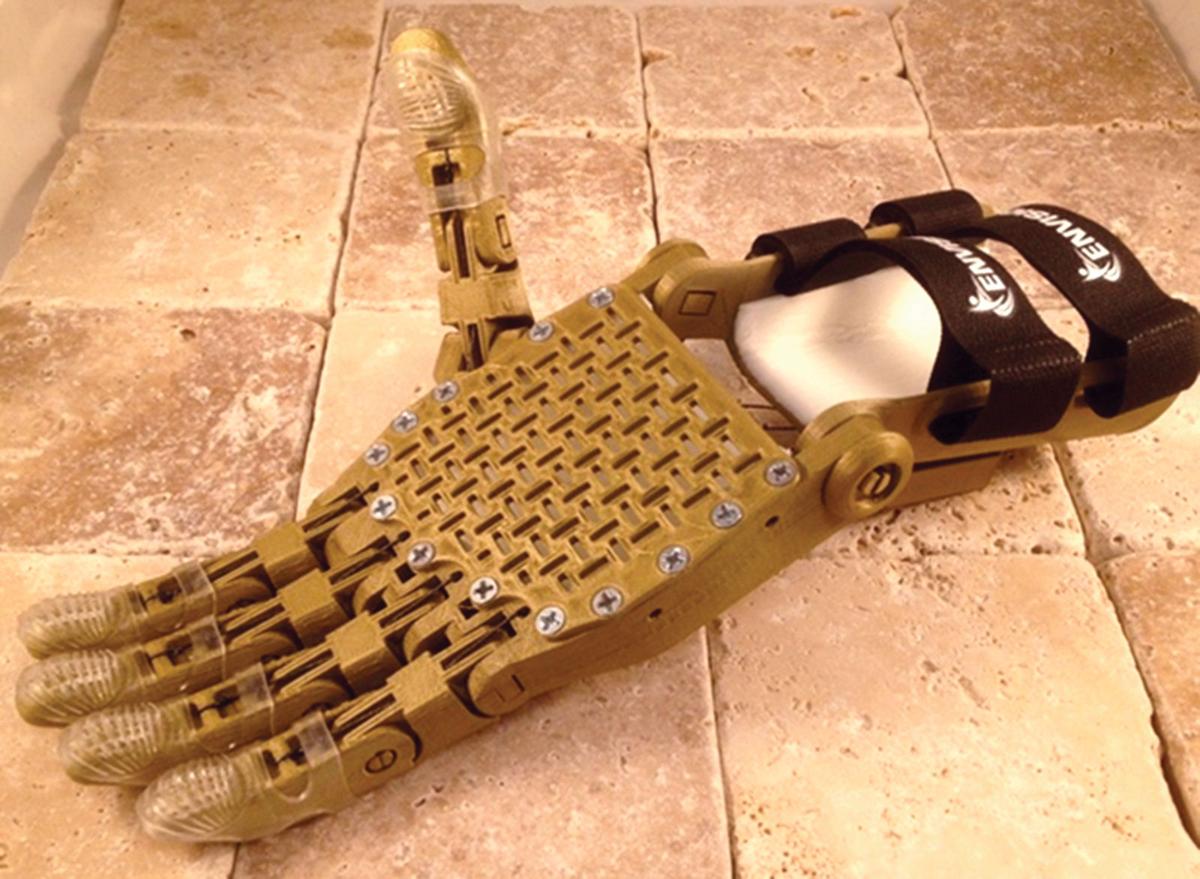 A sample of an assembled hand. The Bio/Chem Club will have to assemble one like it in order to be an E-Nable-certified provider of 3-D printed hands.

From Left: Christopher Wixon, Sister Bonita Gacnik and Mitchell Lonneman work at the 3-D printer to release printed pieces from the plate.

A sample of an assembled hand. The Bio/Chem Club will have to assemble one like it in order to be an E-Nable-certified provider of 3-D printed hands.

Mount Marty College plans to literally give a helping hand to children in need.

Students in the Mount Marty College (MMC) Biology/Chemistry (Bio/Chem) Club have been given the green light to 3-D print custom prosthetic hands for children in need.

The group is working with an organization called E-Nable that provides free 3-D computer files needed to print each individual piece of a prosthetic hand, along with instructions for printing and assembly. Kits with additional parts, including rubber grippers for the fingers, tension wires, Velcro straps and screws, are sold on the organization’s website.

“E-Nable is kind of a community of 3-D printers that have come together and decided that one of the things to do with these 3-D printers is service,” said Tamara Pease, assistant chemistry professor and faculty advisor for the Bio/Chem Club. “They’ve come up with several different types of prosthetic devices that can be printed.”

Juniors Christopher Wixon and Mitchell Lonneman, co-presidents of the Bio/Chem Club, are learning how to use the 3-D printer so they can output the parts for each hand to assemble with the rest of the club.

“We will probably get a few other Mount Marty students, at first, to learn how to do it,” Wixon said. “Then we hope to get more people involved, teach more people, so we can make these hands faster.”

The club will have to print and assemble a functioning adult hand for E-Nable representatives to examine. If the hand is deemed acceptable, the Bio/Chem Club will become a certified E-Nable provider of free prosthetic hands.

“Prosthetic hands are very expensive,” Pease said. “I, frankly, don’t know the full cost of prosthetic devices, but, with the parts that we have purchased to assemble and the filament, the price for hand runs approximately $50 — without labor.”

An Internet search by the Press & Dakotan showed that traditional prosthetic hands start at about $3,000 and can be partially covered by health insurance.

Through E-Nable certification, the Bio/Chem Club can be contacted by anyone who has a child that needs a prosthetic hand.

“There’s a pretty big need out there,” Lonneman added. “As soon as we get our names out there, there will be people coming to us needing hands. So the biggest hump we are trying to get over now is to properly learn how to put these things together.”

“I built a project that contains all of the files for a left hand or a right hand,” Gacnik said. “The printer estimates about nine hours to print (the pieces for one hand). If we got a system going, I think we could print at least two a day.”

3-D printing is a relatively new technology that translates a virtual 3-D object defined in a computer file into an actual object in the physical world. Instead of ink, a 3-D printer uses a filament that it can melt — in this case plastic — and extrude to build an object layer by layer.

Right now, the group is experimenting with different colored filaments, including flesh tones and primary colors like yellow, blue and black.

Another challenge they have discovered is removing the cooled printed pieces from the printer plate.

“We haven’t made (a hand) from scratch yet, but we printed a full hand, and then I printed a second hand, but we had to wait, because I had to go online to figure out how to get the darned pieces off the plate,” Gacnik said. “You can buy plates that are flexible, and you flex the plate and (the pieces) pop off. It would probably work, but I am not sure how much we want to invest in modifying the printer.”

Because of her work with local Eagle Scout Ryan Trail, Pease has already had some experience assembling the hands.

Trail, who has been making hands with E-Nable as part of his Eagle Scout project, recommended it to Pease for Mount Marty to take on.

“The assembly itself, once you figure out how to assemble it, is not hard, but the harder part is removing loose plastic pieces,” she said. “All of these little bits and pieces, where you have to be able to put pins and screws in, if they are not printed perfectly, or if they are hanging, we have to go in and scrape those out.”

Part of what Pease learned from Trail was to print carefully and slowly in order to be able to assemble the hand more quickly.

Each prosthetic hand must be custom made and fitted to each wearer, she said. People in need can come from anywhere in the world, but this particular prosthetic will only work on people that have some portion of their hand remaining below the wrist.

Children in war-torn areas have a great need for these devices, as well as those born without fingers, Pease said.

Simple farming accidents can also result in the need for a prosthetic hand, Gacnik added.

“Anybody who can’t afford to pay for a prosthetic device has a need,” Pease said. “Ideally, we would have someone contact us and say, ‘I have a child this age, this is the size of the hand — they have ways for someone to determine what size they need — and he wants a green one with yellow fingers.’ We print it off, assemble it and mold it to fit them.”

Since the hands are donated at no cost to the wearer, part of the project’s success will depend on the Bio/Chem Club’s ability to fund-raise for the necessary supplies, Pease said.

“In talking about it, we have had some very enthusiastic support,” she said. “The Rotary Club has donated $500 to the Bio/Chem Club to start purchasing, but the club has decided to extend that money to be able to purchase more and make more hands, so they are going to run a fundraiser.”

The fundraiser will sell four different types of amaryllis and also Paperwhites as a holiday gift box.

“We are going to begin next week, and hopefully deliver by Thanksgiving,” Pease said. “All the funds that come from that will go towards this project.

Once they have a system down, the club hopes to get others involved in making the hands so they can make them faster and help address the great need.

“The Bio/Chem Club has really embraced this,” Pease said.