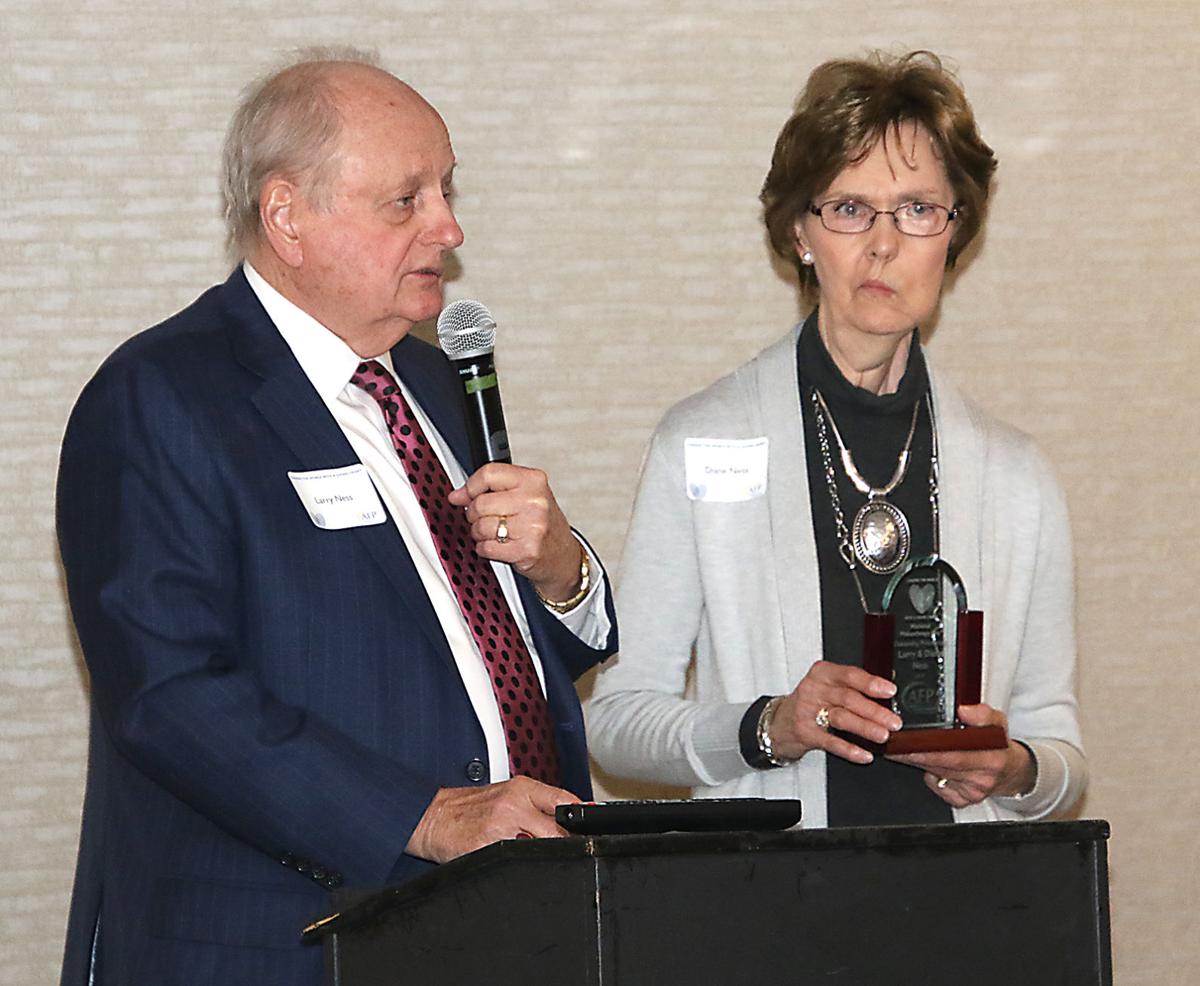 Larry and Diane Ness were honored Tuesday with the Outstanding Philanthropists Award during the Celebration of National Philanthropy Awards Luncheon hosted by the South Dakota chapter of the Association of Fundraising Professionals. 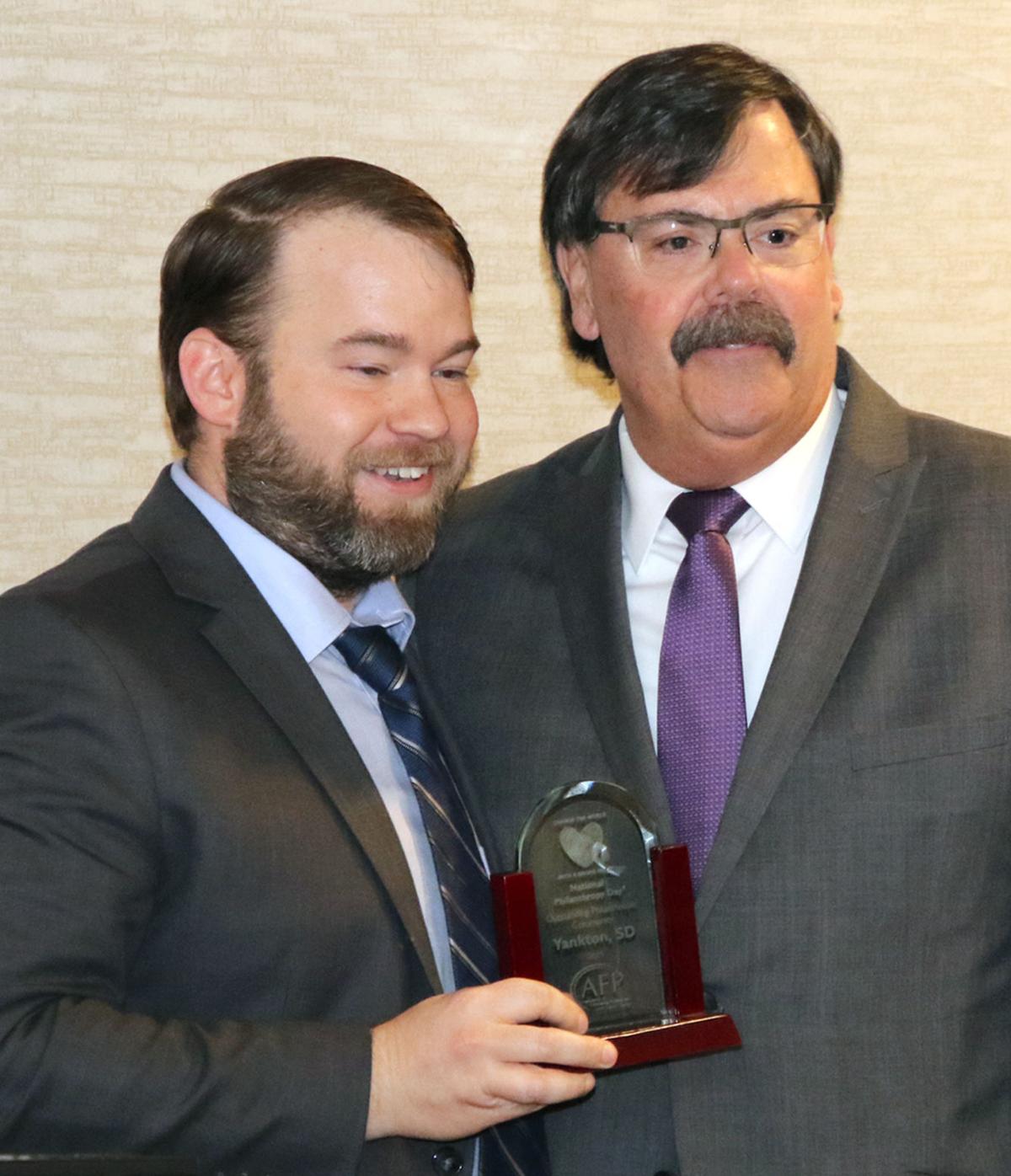 The City of Yankton was awarded the Outstanding Philanthropic Community Award for the second time, with Mayor Nathan Johnson (pictured left) accepting the award on behalf of the community. He is shown with Matt Michels who served as the program’s master of ceremonies. 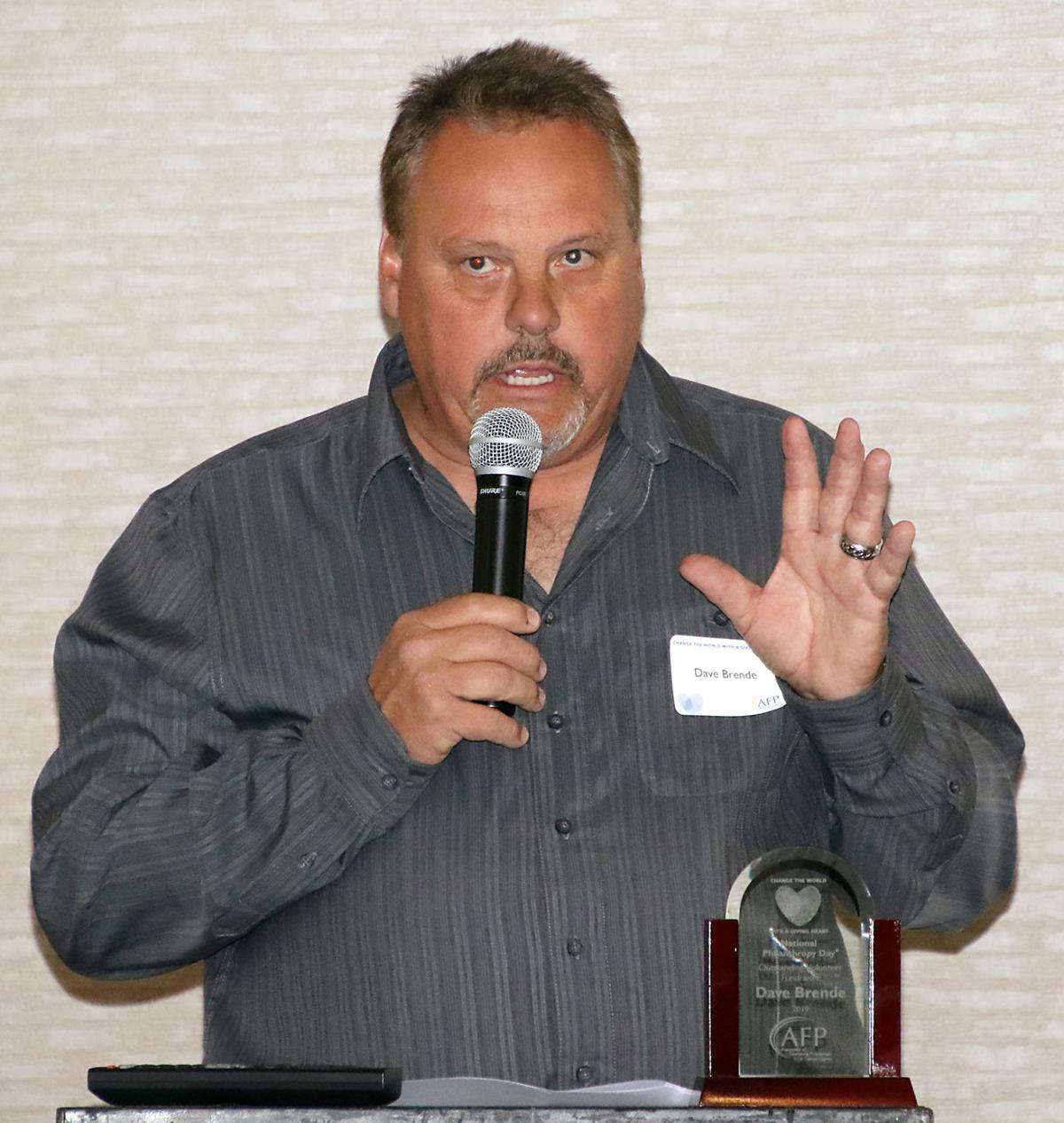 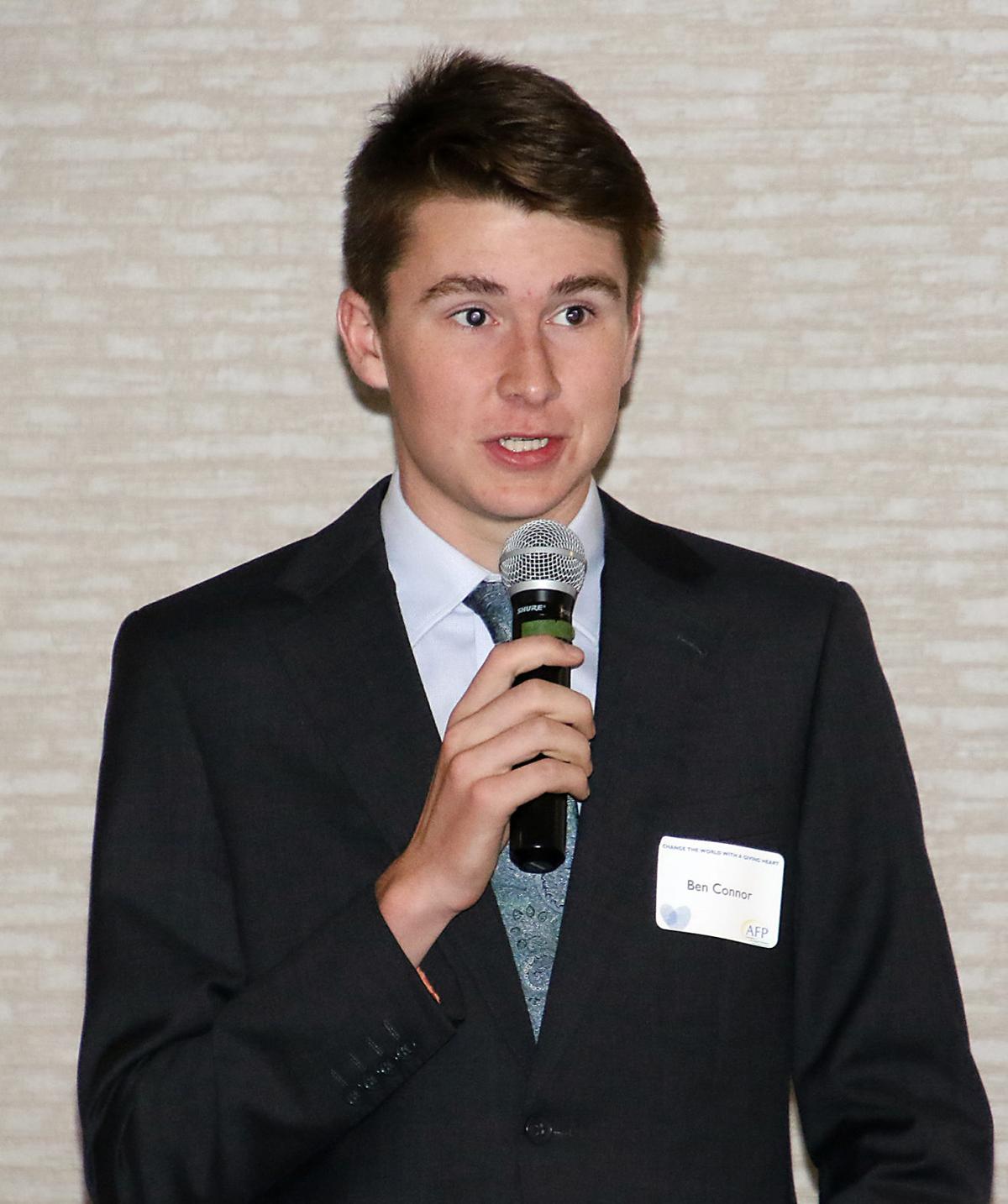 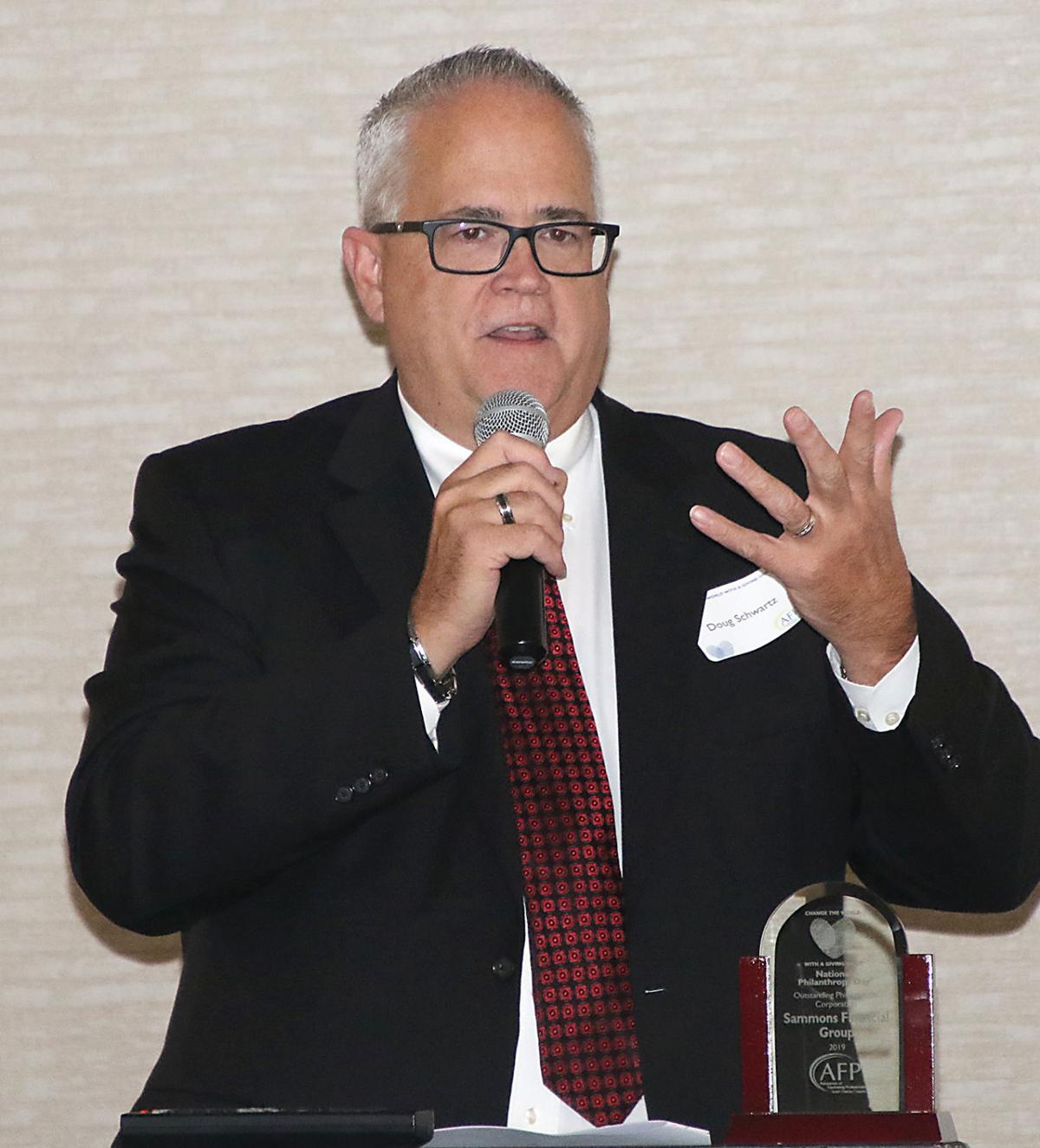 Larry and Diane Ness were honored Tuesday with the Outstanding Philanthropists Award during the Celebration of National Philanthropy Awards Luncheon hosted by the South Dakota chapter of the Association of Fundraising Professionals.

The City of Yankton was awarded the Outstanding Philanthropic Community Award for the second time, with Mayor Nathan Johnson (pictured left) accepting the award on behalf of the community. He is shown with Matt Michels who served as the program’s master of ceremonies.

Yankton had a chance to celebrate philanthropy in a big way Tuesday.

On this day, the South Dakota chapter of the Association of Fundraising Professionals brought its annual Celebration of National Philanthropy Awards Luncheon to Yankton for the first time — and Yankton ended up being well represented.

During their acceptance of the award, Larry Ness praised the gathered crowd of area leaders who have done much to contribute to the ideals of philanthropy.

“It’s not about the amount,” Ness said. “It’s about doing the things we can with our time. I am so amazed with the people in this room who have so selflessly given their time. I can’t do it, I don’t do it and it’s a failure on my part to give up my time. I am proud of you people who have made things happen by giving your time.”

After Tuesday’s ceremony, Ness said he learned from a number of individuals over the years.

“I was fortunate in my life to meet some people that really made a difference for me who already had it figured out how to help causes and people get things done financially,” he said. “They taught me the value of giving.”

He added that events like Tuesday’s ceremony can really get people going in philanthropy — something he thinks the Yankton community needs to see more of.

“It can spark interest in people who participate in the various functions going on here,” he said. “We have people in this community who are capable of giving who haven’t quite found the impetus to give. I wish they would. We’d be a better community if they did.”

The Nesses were nominated by the Avera Sacred Heart Foundation and were recognized for their support of many projects throughout the Yankton community since 1983.

The Yankton community itself was also recognized Tuesday when it was awarded the Outstanding Philanthropic Community Award.

Accepting the award on behalf of the city was Mayor Nathan Johnson.

“There’s a lot going on in the community and a lot of partners are a part of that success,” Johnson said. “While I think I speak for all our residents that we are truly humbled and honored by this recognition, I would also be lying if I said I was surprised. That’s because I witness the good work so many people do in our community day after day.”

He added that philanthropy is a way of life for the people of Yankton.

“It’s the way we take care of those who have fallen on hard times,” he said. “It’s the way we recover from natural disasters (and) it’s the way that we come together as a team to invest in our community’s growth and future.”

The City of Yankton was nominated by the South Dakota Community Foundation and recognized for a number of efforts, including the Yankton Area Foundation’s raising of $860,000 and giving back $435,000, the Yankton School District’s partnership with the Boys and Girls Club, and Dive In Yankton’s efforts to raise money to go towards the Huether Family Aquatic Center.

Yankton was previously named the Outstanding Philanthropic Community in 2007.

• The Outstanding Youth in Philanthropy Award — Ben Connor of Howard. Connor was nominated by the Horizon Health Foundation for his work on the Tigers Step Up 2 Cancer Campaign, which has raised over $21,000 since 2017.

Larry Ness even had high praise for Connor, who is still a student in high school.

“If you leave this state, kid, I’m going to come hunting for you,” Ness said. “These are the kinds of people we need to develop our state into the next great thing.”

•Outstanding Philanthropic Corporation Award —Sammons Financial Group. Nominated by the Lifescape Foundation, the Sioux Falls-based business was recognized for donating $3.6 million to local organizations and encouraging a philanthropic spirit among its employees. The award was accepted by Doug Schwartz.