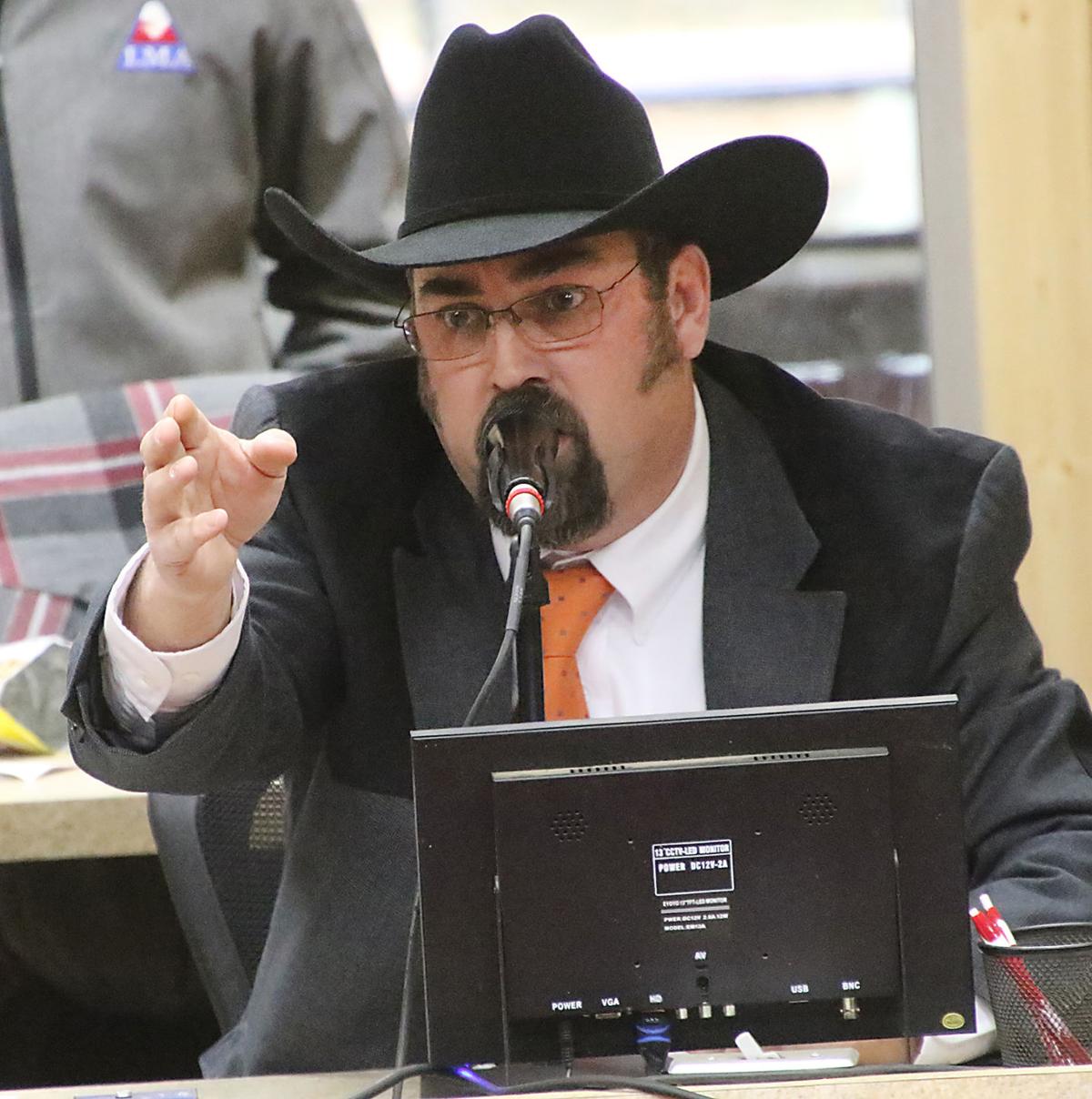 Jeff Showalter (shown) of Broadway, Virginia, was among the 31 contestants competing in the World Livestock Auctioneer Championship regional competition, held Wednesday at Stockmen’s Livestock Market in Yankton. The competitors auctioned off cattle provided by area producers. A large crowd jammed into the Stockmen’s arena to watch the competition, which was also broadcast live on YouTube. To watch a video, visit www.yankton.net. 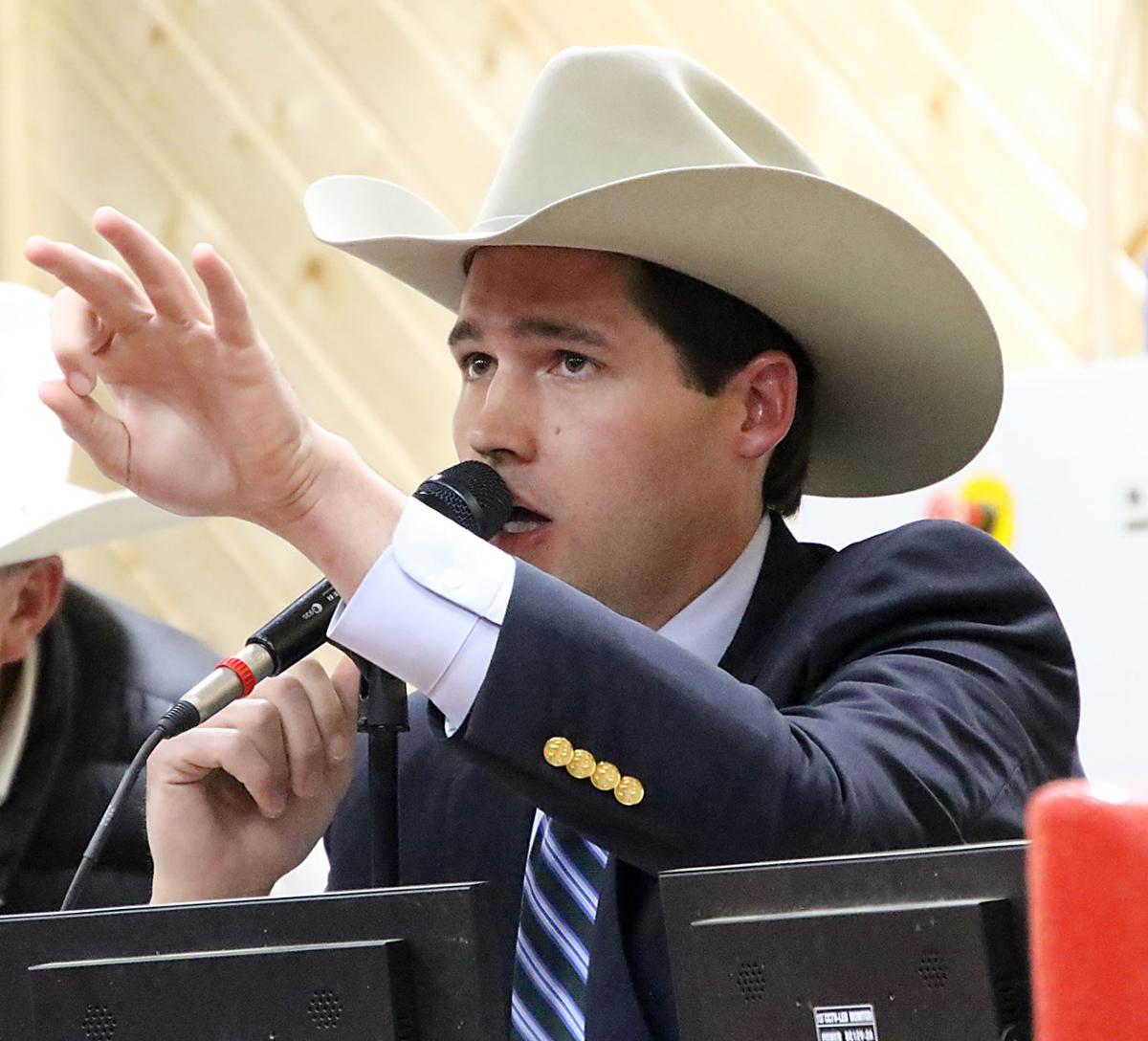 Seth Harvey of Jackson, Georgia, were among the 31 contestants competing in the World Livestock Auctioneer Championship regional competition, held Wednesday at Stockmen’s Livestock Market in Yankton. The competitors auctioned off cattle provided by area producers. A large crowd jammed into the Stockmen’s arena to watch the competition, which was also broadcast live on YouTube. To watch a video, visit www.yankton.net.

Jeff Showalter (shown) of Broadway, Virginia, was among the 31 contestants competing in the World Livestock Auctioneer Championship regional competition, held Wednesday at Stockmen’s Livestock Market in Yankton. The competitors auctioned off cattle provided by area producers. A large crowd jammed into the Stockmen’s arena to watch the competition, which was also broadcast live on YouTube. To watch a video, visit www.yankton.net.

Seth Harvey of Jackson, Georgia, were among the 31 contestants competing in the World Livestock Auctioneer Championship regional competition, held Wednesday at Stockmen’s Livestock Market in Yankton. The competitors auctioned off cattle provided by area producers. A large crowd jammed into the Stockmen’s arena to watch the competition, which was also broadcast live on YouTube. To watch a video, visit www.yankton.net.

Fast-talking auctioneers slowed down to talk about their trade and Midwestern Region Qualifying Event of the 2020 World Livestock Auctioneer Championship that was held in Yankton on Wednesday.

The competition, hosted by Stockmen’s Livestock Market, featured 31 auctioneers from the U.S. and Canada. Each contestant sold eight drafts and was judged on knowledge of the product, accuracy and several other factors, including command of sale, professionalism and poise, body language and eye contact, clarity, rhythm and timing, voice quality and control.

They were also judged on whether or not the judges would want to hire them.

“I have been trying to get this contest here for years,” said Greg Ryken, owner of Stockmen’s Livestock Market. “This is hosted three times a year, and then they take the top 10 out of these three events and they’ll have a world championship in Tennessee this year.”

The championship is sponsored and organized by the Livestock Marketing Association (LMA) that determines which facilities are able to handle such a large event, Ryken said.

“We’ve got a lot of good cattle and a lot of good buyers,” Ryken said. “It’s a great event. We’ll sell between 4,000 and 4,500 cattle here today and the house is packed. We’ve got buyers from all over the country.”

LMA has about 840 member markets and has been hosting this contest for 57 years. The regional quarter-final events allow LMA to host this time-honored event in member markets that wouldn’t ordinarily host them, Ryken said

“We’ve had a good turnout this year, about 30 or 35 at the regional qualifiers,” said LMA President Tom Frey, who is also an auctioneer. “There have been several rookies. It’s always great to see youth in our industry — in any ag related industry.”

Participants’ ages range from about 20 to 70 years old, he said.

“There’s no better way to promote the auction industry and the true art of selling livestock at auction,” Frey said. “It’s the only form of true price discovery. Whenever you take competition out of anything, you lose a lot. So we do it all with competition. We get the high dollar.”

The event also illustrates the economic impact of the local auction market on a community, he said.

“They will sell roughly 4,000 cattle today,” Frey said. “They will probably handle more money today right through this office than what the bank on the corner will.”

The money put in the pockets of the producers and the local economy by these auctions is unbelievable, he said.

Marshal Tingle of Nicholasville, Kentucky, came from an ag background and was inspired to enter the cattle business by his grandfather’s livelihood, he said.

Tingle, who has been an auctioneer for about five years, took a few moments to talk to the Press & Dakotan about how he got into this fast-paced, fast-talking line of work.

“Growing up as a kid, you would always go to market with your cattle in the sale barn, and that auctioneer’s chant really captivates you and gets you thinking and gets you going,” Tingle said. “To be honest, I just got hooked with it. So I decided that’s what I wanted to do — pursue my passion — and that’s what I’m doing today.”

The World Livestock Competition is like the Super Bowl for auctioneers, he said. Winners are the best of the industry for that year and act as spokesmen for the industry.

“(We’re) a spokesman to tell people what we do as far as taking a person’s livestock and their commodities and turning it into the cash and livelihood that that can go out and pay their farm bills or buy their groceries,” Tingle said. “Our whole job is to get our consigners the top dollar that we can at that exact moment in time.”

Tingle was not the only auctioneer to compare Wednesday’s event to the Super Bowl.

“Just as Tom Brady wants to play in the Super Bowl, we want to be in this,” said Brandon Hamel of Plainville, Kansas. “It’s a way for us to showcase what we do and our talent, and dreams of growing up and being in the sale barns.”

Hamel, who has been an auctioneer for about 10 years, said he was raised in a family of farmers and ranchers, and he taught himself the auctioneer’s chant.

“(There were) a lot of miles driving, messing around and a lot of practice,” Hamel said. “Our spouses get tired of hearing us.”

All three of his children have been trying to teach themselves calling, too, he said.

Brad Veurink of Corsica, who has been an auctioneer for about 15 years, transitioned from calling property auctions to livestock auctions about two years ago.

“Cattle is completely different. I like the action,” he said. “You are really looking at the quality of the livestock that you are selling. You really have to gauge the looks of the cattle and the condition of the cattle. It’s not like one sale is like the other.”

Part of what auctioneers do is describe the product in special auctioneer lingo, he said, while the cattle are rushed through a showing pen for the buyers.

“It’s chaos! It’s exciting and I love the challenge,” Veurink said. “I feel God has given me a good, deep voice and the opportunity to use it. I love it.”

But there’s more to it than excitement and meeting new people, he said.

“Sellers place their paycheck for the year in our hands,” Veurink said. “It’s a big deal. We want to do our very best as auctioneers to represent it and to also make them feel that we do appreciate the opportunity to sell.

“There’s quite a bit of responsibility with it.”

The following contestants locked in their spot to the 2020 WLAC:

For more information go to https://www.facebook.com/auctionLMA