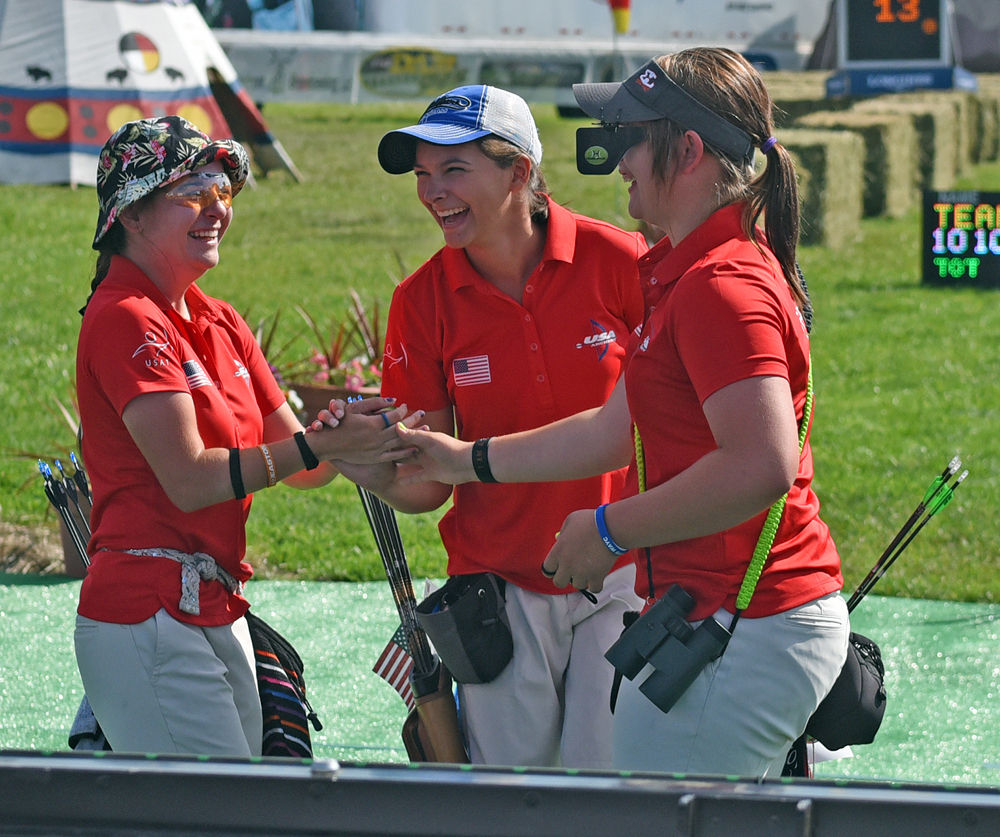 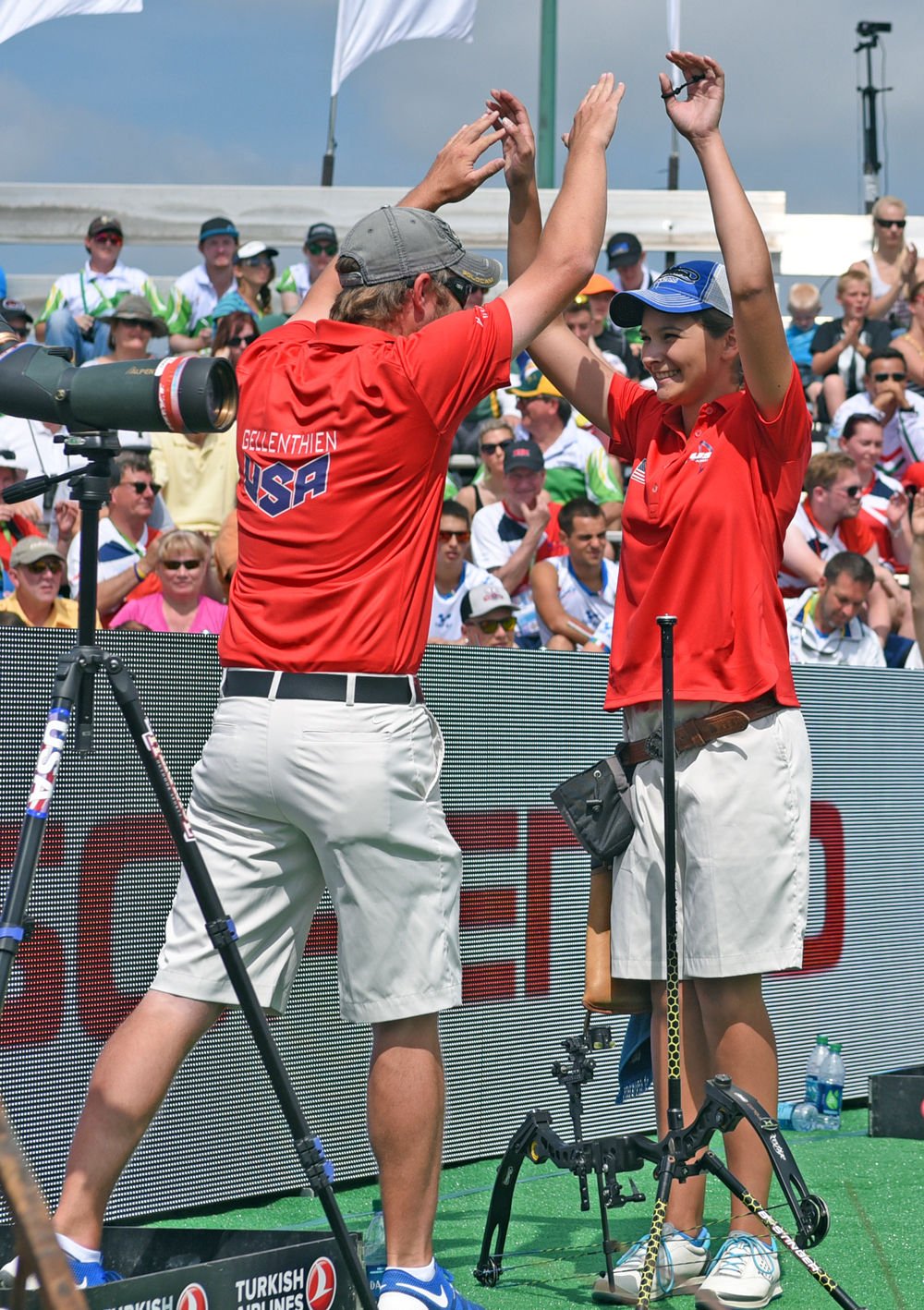 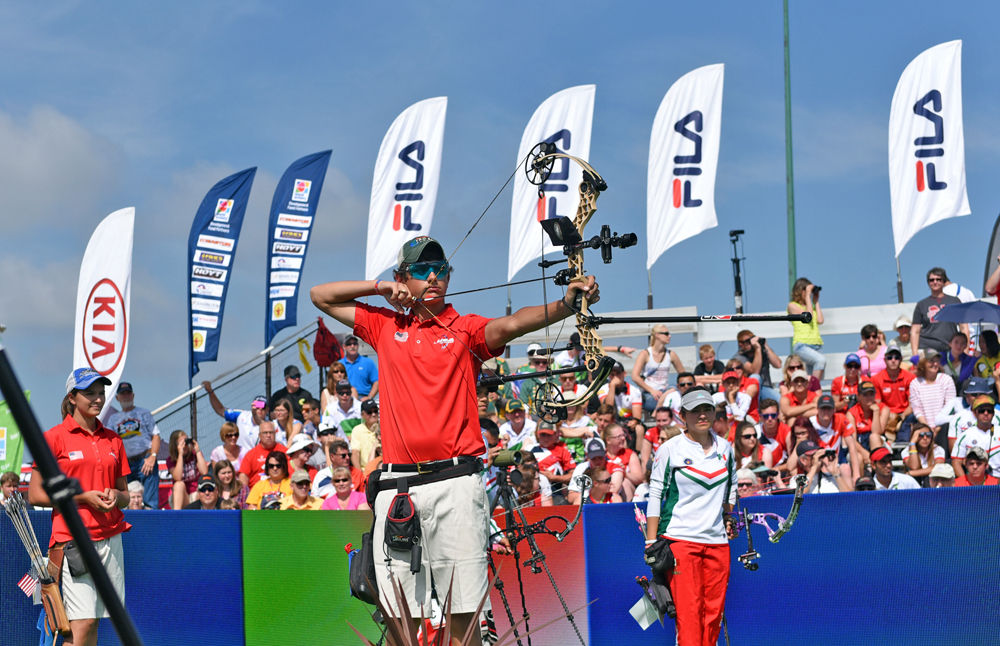 In the span of two months, Cassidy Cox went from qualifying for the World Archery Youth Championships (WAYC) to helping her country win a gold medal.

Not bad for someone who comes from a state she says doesn’t produce many tournament archers.

So too is the United States, particularly in compound archery, as it displayed Saturday to a worldwide web audience — the finals are broadcast live on YouTube.

The group, which qualified for the WAYC two months ago, didn’t practice together until they got to Yankton, three days before the tournament started.

“You have to get to know each other and develop a rotation, who goes when,” Cox said.

Adding to the learning curve was the fact that Cox shoots left-handed, while Crook and Theodore shoot right-handed.

“I’m a lefty, so I made it complicated,” joked Cox. There’s a synchronization factor at work in the team events, as archers switch places in a specific pattern.

The United States, though, built an early lead in Saturday morning’s final against Mexico, and claimed a 228-217 victory.

As she prepares to head back home from a successful weekend in Yankton, Cox said she was especially proud of what she did out of a state that doesn’t produce many top archers.

“Not many archers have come out of New Mexico,” she said. “It’s a lot of bowhunters, and bow shops that sell equipment.

Not only did Dane Johnson have another early wake-up call Saturday morning, he was on the big stage for consecutive gold medal matches.

“It feels amazing to accomplish something I’ve always dreamed about since I was nine,” Johnson said.

“I never thought it would happen.”

The Mexican duo, however, beat the United States in a shoot-off, with the final arrow coming down to the closest to the center.

“I told myself, don’t worry about them, just stay focused,” Johnson said.

“It definitely means something to me,” Johnson said. “I always wanted to do this, and I worked hard to get here.”

On the first day of finals for the World Archery Youth Championship the United States Women’s Compound Junior team was able to win gold on Saturday in Yankton.

Team USA was able to beat the team from Colombia, 219-218, after being behind in points for most of the match. Colombia was winning by five points after the first round and was up by two going into the fourth and final round of shooting where a seven point arrow lost the team the medal. The USA team was made up of archers Emily Fischer, Paige Pierce, and Danielle Reynolds.

“It feels really good,” Reynolds said. “We really worked well as a team so it was awesome we could go out and win one for the US and represent here in Yankton.

“There was a little bit of pressure but we just stayed calm, we knew to just make the shots and it just worked out for us.”

The Men’s Compound Junior team was also able to make it to the final on Saturday for team USA and lost in the gold medal match to take home silver against the team from Turkey. The USA team made up of Chris Bee, Steven Manfull, and David Houser led the entire match and took a three point lead into the final round. Turkey made their comeback by shooting one point from perfect in the final round of shooting to win, 229-227.

The Colombian team of Sara Lopez and Camilo Cardona were able to shoot a perfect round 40 points in the final round to beat Tanja Jensen and Stephan Hansen of Denmark by one point in what was an even match throughout.

“It feels great because in compound you always have to shoot tens to win and closing with it feels great,” Lopez said. “It was a tough match, they are a great team, and we are happy with the results.”

Lopez and Cardona have been shooting together for mixed teams since 2009.

“We know each other and how the other one shoots and everything so I think that maybe kind of helps us in the medal match because we trust in each other,” Cardona said.

There was no bad blood between the two teams as they playfully celebrated on the podium during the medal ceremony together.

“We have known Stephan from 2011 or 2012,” Cardona said. “To me it’s just like hanging out with my friends and on the podium everyone is going to celebrate.”

With a small section of Denmark fans cheering them on, Tanja Jensen and Stephan Hansen were able to win the Women’s and Men’s individual Compound Junior gold medals, respectively.

Jensen took on her Danish teammate Sarah Sonnichsen and led the entire way to win by three points, 145-142. After the match the teammates celebrated together both happy for each other.

Hansen was able to beach American David Houser in his match and was able to win, 147-143, scoring three perfect 30 point rounds and finishing three points off of a perfect match.

Photos from June 13, 2015, competition in the World Archery Youth Championships, being held in Yankton, S.D.